Bangor came from 21-9 down against Sunday's Well, with a three-try fight-back guiding them to victory ©Roger Corbett/Bangor RFC

It was a winning return to Energia All-Ireland League rugby for Instonians who overcame Tullamore 39-21. Skerries began their challenge for promotion from Division 2C with a 29-21 victory at Ballina.

Instonians tallied up seven tries, including a brace from hooker Neil Saulters, to beat Tullamore 39-21 at Shaw’s Bridge on the opening day of the Division 2C campaign.

The Tulliers knew they were in for quite a game when Inst scored after just 36 seconds. Centre Bevan Prinsloo darted forward into space and had an exchange of passes with Matthew Keane before diving over in the left corner.

Credit to both teams, they produced an electric seven-try first half. Tullamore took a brief 7-5 lead when Conor Dunne’s skip pass put winger Sean McCabe over in the corner, and he also supplied a terrific conversion.

Inst, who were playing into the wind, reclaimed the lead in the eighth minute, Saulters crossing from a well-constructed lineout maul with Jonathan Milliken missing the conversion.

Milliken was back on target when converting winger Ruairi O’Farrell’s fine finish to the left of the posts, but Tullamore reduced the arrears to 17-14 soon after. McCabe pounced on a slip by Jack Elliott to score from a Craig Strong kick.

Inst responded by stretching the Tullamore defence, attacking from wing to wing and the visitors’ scrum half Dunne saw yellow for a deliberate knock-on. An advancing maul paved the way for Milliken to step through and register the bonus point try.

The sin-binning actually inspired some of Tullamore’s best play. They dominated possession and territory in the lead up to half-time, making it count in the form of their third converted try.

The Inst lead was cut to 22-21 after Strong converted from the touchline, topping off a Liam Farrell effort set up by a slick break from full-back and captain Brian Geraghty.

Instonians’ mauling and scrummaging were serious weapons on the day and they became more influential as the game went on. Saulters was driven over for his second try early in the second half.

Inst did further damage at scrum time, landing Tullamore prop Cathal Behan in the bin, and a big overlap allowed winger Elliott to score the home side’s sixth try, converted by Milliken for a 34-21 scoreline.

Matthew Keane widened the winning margin to 18 points as the Belfast outfit capitalised on their numerical advantage again. The only downside on the day for Inst was centre David Scott’s injury – a chip ankle bone and partial rupture of his Achilles.

Beaten in last April’s promotion play-off decider, a new-look Skerries team took to the field against Ballina and came away from Heffernan Park as 29-21 winners.

Connor Boyce, Niall Keane and Darragh Whyte all touched down for the Moy men, while Skerries had a brace of tries from winger Oisin McKey and 19 points from the respective boots of the Mulcahy brothers, Ronan and Billy.

McKey touched down twice during the first half, his 12th-minute opener the best of them as he chased down a brilliant box kick from scrum half Shane Murphy and showed his finishing skills.

Ballina were right in the hunt at half-time, only 20-14 behind despite flanker Bradley O’Leary’s early sin-binning. Their second try was well taken by sniping scrum half Keane.

Ballina scored the only try of the second half – full-back Whyte flew up into the line to score – to make it 26-21 with 10 minutes remaining. Yet, the elder Mulcahy settled the issue with a penalty from in front of the posts. 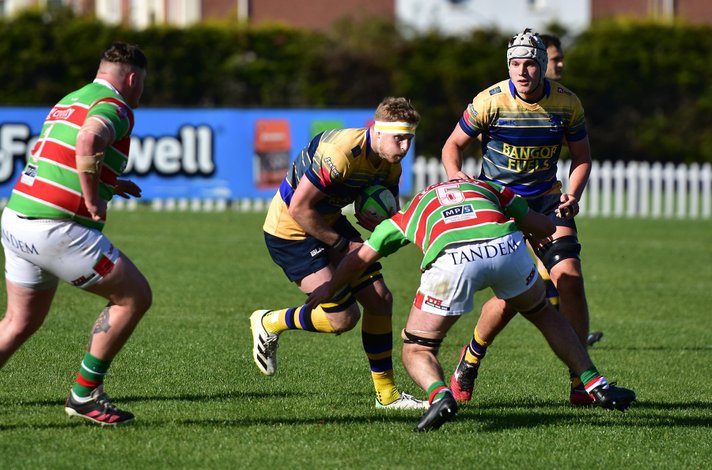 Bangor recovered from a 21-9 half-time deficit, keeping Sunday’s Well scoreless in the second half at Upritchard Park to finish as 30-21 victors.

The ‘Well produced a very promising first half performance which was topped off by closing tries from Andrew Mintern, amid a spate of forward carries, and Kieran Maye with a lung-busting intercept effort.

The Corkmen, who had player coach Denis Hurley at outside centre, had an earlier Jack McHenry score from a lineout maul. Bangor’s scrum was in dominant form and Rhys Larmour kicked three penalties.

The Seasiders’ superior scrummaging was evident early in the second period. Having lost Mike McCarthy to injury, the ‘Well had Evan O’Connell sin-binned as the home scrum heaped the pressure on.

Scrum half Lewis Bret twisted and turned out of a couple of tackles to make the line for Bangor’s first try. Full-back Larmour tagged on the extras to make it 21-16. 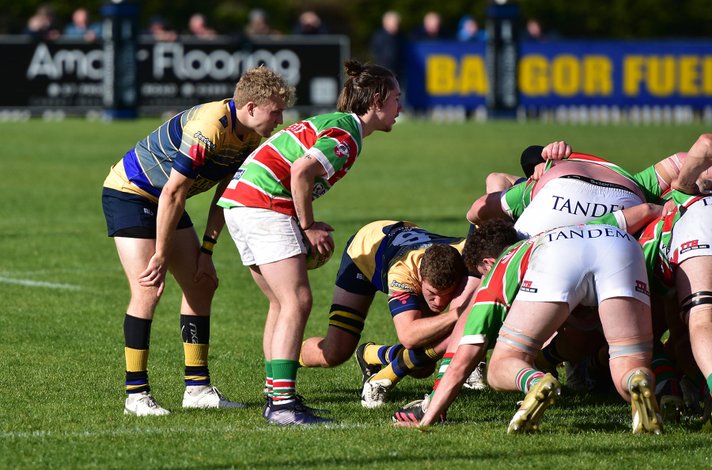 Despite having to go to uncontested scrums, Bangor were now making inroads through their backs. On the hour mark, Conor Scollan broke down the left wing, linking on his inside with the supporting forwards.

Blindside Matt Nesbitt burst through a gap to dot down, with Larmour’s conversion edging Tom Rock’s charges back in front at 23-21. Crucially, they held onto the momentum for the remainder of the game.

Strong carries from Declan Horrox and Mike Weir took them back into try-scoring range in the dying minutes, and the ball was worked wide for Rob Gamble to power his way over the whitewash.

There was still a dramatic twist to come with the ‘Well enduring a luckless finish. Larmour’s touchline conversion, into a headwind, bounced over off the crossbar to take the losing bonus point away from the Cork side.

Scrum half Paul Collins claimed a fantastic full house of scores as Bruff battled past Omagh on a 20-18 scoreline at Kilballyowen Park. Collins finished with two tries, two conversions, a penalty and a drop goal.

Omagh had recovered from a nervy start to draw level at half-time. Mervyn Edgar took a great line to score their opening try before Phil Ewing forced his way over from a lineout maul to make it 10-all.

The Accies made it three tries on the trot when young prop David Braden charged through on a 40-metre run, drawing in the last defender to put captain Ryan Mitchell away to score.

Although Collins replied with his second converted try in the 66th minute, Omagh answered back with a penalty from Stuart Ballantine to make it 18-17 in a tension-filled conclusion to the match.

Despite a penalty attempt coming back off the post, Bruff were able to regather possession and a drop goal from Collins, with five minutes remaining, saw them snatch victory from the jaws of defeat.

After the sides were locked level at three points apiece, Monua began the second half by crashing over the whitewash following a couple of strong lineout drives by the hosts.

Midleton set up a grandstand finish with ex-Clonmel prop Mark Corby’s 67th-minute try reviving their hopes. However, Fronek fired home his second penalty of the afternoon to see the Tipperary men take a 10-point verdict.