An Ella Roberts-inspired Wicklow gave it their all in pursuit of a famous win, but second half tries from Claire Bennett (2) and replacement Muirne Wall settled the issue in UL Bohemians’ favour.

This was a huge battle at a windy Ashtown Lane, American recruit Jocelyn Jones touching down twice as Wicklow led 12-10 at half-time and then by seven points with half an hour remaining.

Niamh Briggs’ UL team regrouped to put together some of their best play of the new season, with lock Bennett crossing twice from close range and nippy scrum half Wall breaking through from the edge of the hosts’ 22.

It was enough to confirm their maiden victory of the Energia All-Ireland League Women’s Division campaign, although replacement Lauren Barry’s last-gasp try gave Wicklow two bonus points in a 27-24 defeat.

It was a proud day for the Roberts family as 21-year-old full-back Ella captained Wicklow for the first time. She had to react quickly to bring down Clodagh O’Halloran as a wind-backed UL were first to threaten.

The Bohs forwards carried strongly, as did centre Brianna Heylmann, but tighthead Eilis Cahill was held up from a quick tap with just three minutes on the clock.

There was no denying her two minutes later, the prop rumbling over from close range after Wicklow had initially held out thanks to Ella Roberts’ try-saving tackle on the advancing Aoibhe O’Flynn.

She accelerated into the space ahead of her, and a slick in-and-out run took her around the covering Aoife Corey for her second try of the season. Her younger sister, out-half Beth, converted from the left to make it 7-5.

UL retook the lead following another strong spell from their forwards. Skipper Chloe Pearse took a quick tap and teenage out-half Kate Flannery, on her senior debut, flung a pass wide for Alana McInerney to step inside a defender and score.

Flannery flashed the conversion wide and the younger Roberts missed a penalty just a couple of minutes later. Wicklow, though, were beginning to get on the front foot thanks to a scrum penalty and Ella Roberts’ running from deep.

Sarah Garrett answered back for the Red Robins with a lineout steal, but Elmes Kinlan’s turnover penalty gave Wicklow the lineout platform from which they built for their second try.

Five minutes before the interval, the home side retained the ball well before swinging it back to the near side where the excellent Elmes Kinlan (pictured below) set up winger Jones to edge past Pearse and cross in the left corner. 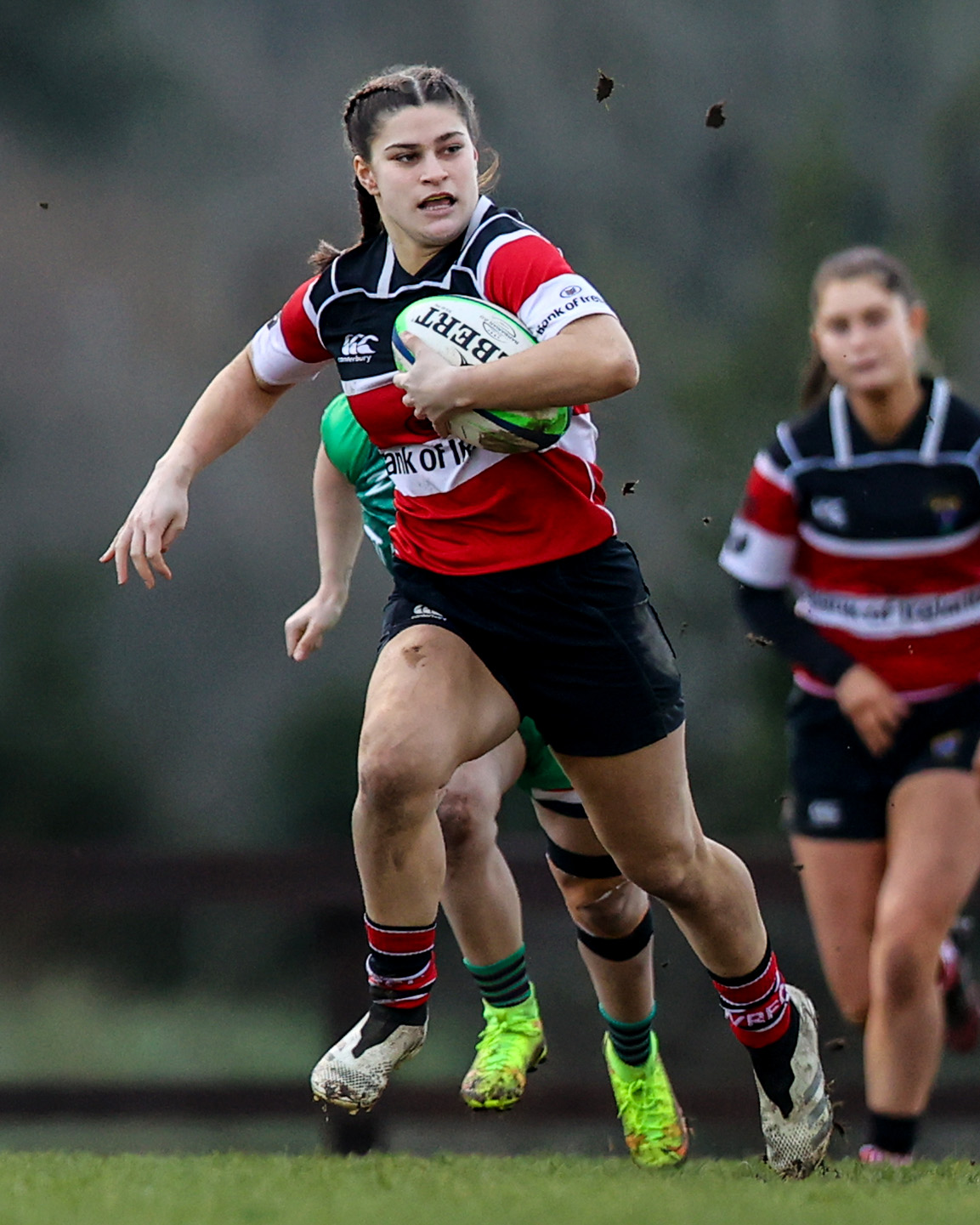 Trailing 12-10 as the second half got underway, UL exerted early pressure through their lineout maul before smart kicking from Beth Roberts landed them outside the opposition 22.

From a subsequent penalty, the Wicklow pack carried aggressively towards the posts and then good hands out to the left released Jones for another quality finish in the corner, past full-back Corey.

With the deficit now at seven points, UL redoubled their efforts and Flannery’s rip in the tackle and break almost created a try from halfway. Pearse provided timely support but her pass back inside went to ground.

Nonetheless, the Bohs forwards began to turn the screw with Wicklow spending more time inside their own half. Wall lifted the tempo, winning a penalty and adding pace to the visitors’ attack.

With Ciara Farrell on the latch, Bennett crashed over for her opening try to the right of the posts. Flannery added a well-struck conversion to bring Bohs level at 17-all, setting up a fascinating final quarter.

Briggs’ charges had the bit between their teeth now, the impressive Farrell breaking through from halfway and full-back Corey drawing them closer. The pressure on the Wicklow defence led to prop Caoimhe Molloy being sin-binned.

Bennett came away with her second try soon after, muscling over from a close-in ruck after Wall had tapped a penalty. Flannery’s conversion slid just wide at 22-17.

Despite more heroics from Wicklow captain Roberts, who prevented a certain try for the fast-breaking Wall, Bohs gave themselves a decisive cushion when their replacement scrum half broke from a ruck and just made the line.

There were still a few minutes left to play and the Garden County outfit, roared on by the vocal home support, made sure they had points to show for their efforts.

Sarah Gleeson and tireless scrum half Roisin Stone exposed gaps in the defence with a couple of clever runs before Barry barged over. Number 10 Roberts converted with the final kick.