Leinster Rugby scrum half Nick McCarthy has received universal support from players and supporters following his announcement that he is gay. McCarthy, a former Ireland U-20 Captain, spoke publicly yesterday for the first time about his decision to tell his Leinster team-mates in January of this year and why he has decided to speak about it now.

In an interview published on LeinsterRugby.ie yesterday Nick said,

“I came out to my teammates in January and I was obviously pretty nervous about doing so, but I’m really happy that I did it. I struggled with coming out for a while and it was starting to impact on me and my happiness so it was the right decision.

“It affected me so much that I agonised over my future and contemplated walking away from rugby altogether because I just didn’t think I could come out while playing rugby.

“But, I spoke to Leo (Cullen) and Stuart (Lancaster) last November and the support that I got from them straight away was unbelievable. They helped and guided me over the months that followed so that I felt more comfortable to come out to the group.” 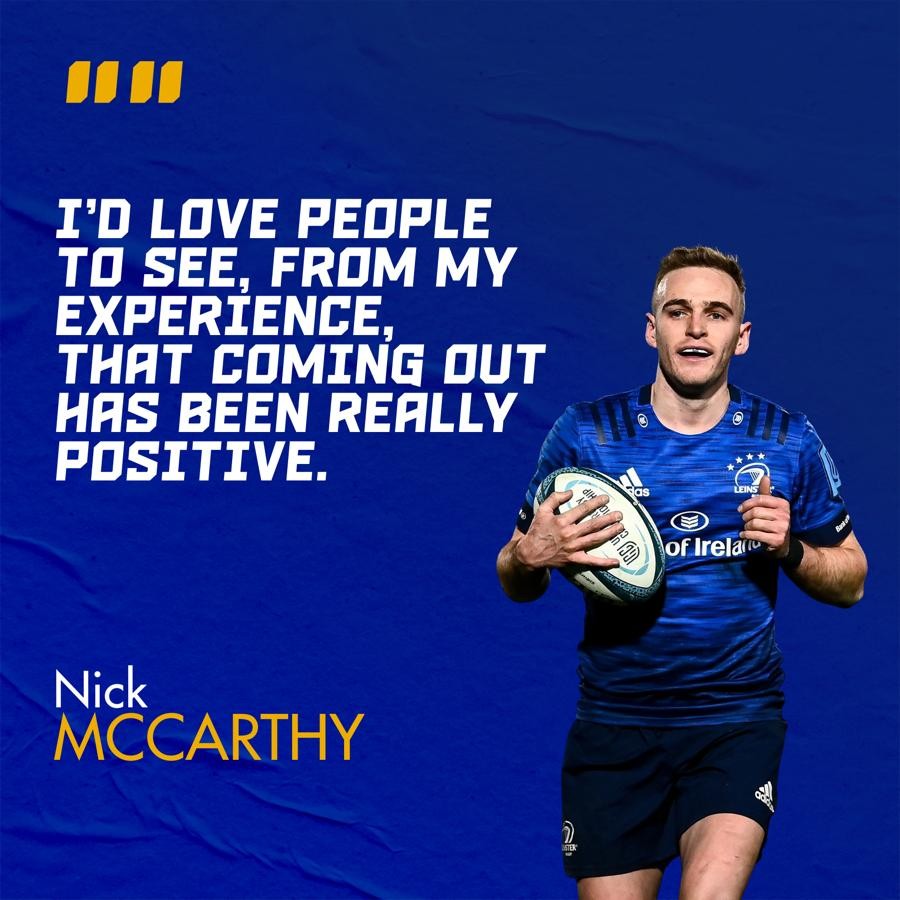 Speaking to leinsterrugby.ie, Leo Cullen shared his admiration for McCarthy and offered his and the club’s full support to the 27-year-old after his decision to speak publicly about his sexuality for the first time.

“Nick told us a while ago and the main thing when I talked to him first, was that it was great that he was able to talk openly to us.

“Nick is a brilliant individual and we are supportive of him. That’s the most important bit for me. We want to make sure that all our guys are able to maximise their ability and be able to bring all of themselves to Leinster Rugby while they are here.

Leinster and Ireland captain Johnny Sexton also offered his full support to his teammate, “I’ve known Nick since his time in the Academy so to hear him talk to us so openly about his struggles has been tough but we are now just delighted for Nick and that he can be himself.

“We talk about looking after our brothers a lot in here and the last few months has been about that, looking out for Nick. And that will continue. By speaking openly about his sexuality, Nick will be a role model for others and we couldn’t be prouder of him.”

Players, supporters, clubs, politicians and others were universal in their support for Nick’s decision to go public. The Tánaiste, Leo Varadkar T.D. said, ‘This is an important moment for men’s sport. Nick will be a role model for young men around Ireland who feel they have to suppress who they are.”

Nick’s Leinster team mates as well as fellow professionals from Connacht, Munster and Ulster posted their support for him across social media channels yesterday.

An important message for so many to see

As a Leinster fan and season ticket holder (who also happens to be bisexual) it's incredibly heartening to see my team has fostered a culture where two players in the squad in Jack Dunne and now Nick McCarthy feel comfortable coming out like this https://t.co/AbzLeyw4lF

Nick is a legend of a bloke and this is a really brave thing to do that will help the next generation speak more openly – kudos to him!! 💙 https://t.co/tD3iLN6zT7

Well done Nick! You're inspiring and helping so many kids around the world with this 🏳️‍🌈🏳️‍🌈
And well done all @leinsterrugby for being so supportive, great to see such an inclusive culture you guys have. No wonder you have so much success 👏🏼👏🏼 https://t.co/d7Rb9o3yxJ