Cashel and Dolphin were the big movers in Energia Men’s All-Ireland League Division 2A, after picking up bonus point victories in round seven.

Cashel made it three wins-out-of-three in November with a 40-19 bonus point success away to Old Crescent. Darragh Lyons’ men are up to fourth in the table.

Old Crescent, who were also gunning for a third straight success, were knocked back by Cashel’s initial intensity which resulted in a maul try for hooker Niall Fitzgerald.

With their scrum in dominant form, the visitors ended the opening quarter 14-0 to the good. Ever-impressive full-back Steven McMahon converted his own try, the assist coming from Aidan Butler off the back of a scrum.

Despite leaking another try to Cashel scrum half Michael Hickey, who sniped through a gap after good work by the forwards, Old Crescent enjoyed a purple patch approaching half-time.

The home backs looked dangerous at times and they pounced just before the break, Cashel losing a lineout on their own 22 and quick hands from Crescent sent winger Val McDermott in the far right corner.

21 points is a long way back, but Crescent mounted a hugely impressive response. They went up a couple of gears to run in two converted tries in a devastating four-minute spell.

Out-half Ronan McKenna converted both, closing the gap to 26-19 after Dan Hurley had finished off a sweeping move and McDermott followed up on a grubber kick to complete his brace.

This Munster derby could have gone either way at this stage, but Cashel knuckled down again and their pack seized control, setting up tighthead Brendan Ryan to crash over for McMahon to convert.

It was a family affair for Cashel’s sixth and final try. McMahon carried strongly from the edge of the Crescent 22, managing to offload out the back for his brother, centre Alan, to score.

Steven converted brilliantly from the touchline, taking his tally to 15 points. Cashel return home to entertain Dolphin next Saturday, with Brian Scott’s men boosted by their 28-20 victory over MU Barnhall.

Influential flanker James Vaughan bagged a brace of tries as Dolphin came from 13 points behind at Musgrave Park to win for the first time since the second round.

Cancelling out an early Adam Chester penalty, Vaughan crashed over just two minutes later. Daryl Foley, who had supplied the scoring pass, added the conversion for a 7-3 lead.

The Blue Bulls hit back with two tries in the space of 15 minutes, out-half Chester providing the assists for both. He initially kept a Dolphin touchfinder in play, launching Conor Lacey on a counter attack and then using the ruck ball to send flanker Paul Nalty sprinting clear to score.

Midway through the first half, Chester took a quick penalty in the Dolphin 22 and flung a long pass out for Tim Lambe, on the wing, to touch down.

After Dolphin had been held up right on the visitors’ line, 15-7 became 20-7 when Barnhall hooker Gareth Murray crossed from a well-executed 36th-minute lineout maul.

Crucially, Scott’s side squeezed in a try on the stroke of half-time, their forwards being held up again before opting for a scrum from a penalty. The shove came and Vaughan grounded the ball for Foley to convert.

A great defensive shift in the second half provided the platform for the hosts to go on and win. 15 minutes in, Cam O’Shaughnessy’s cracking 50:22 kick set up a close-in lineout and there was no stopping Barry Fitzgerald from scoring. 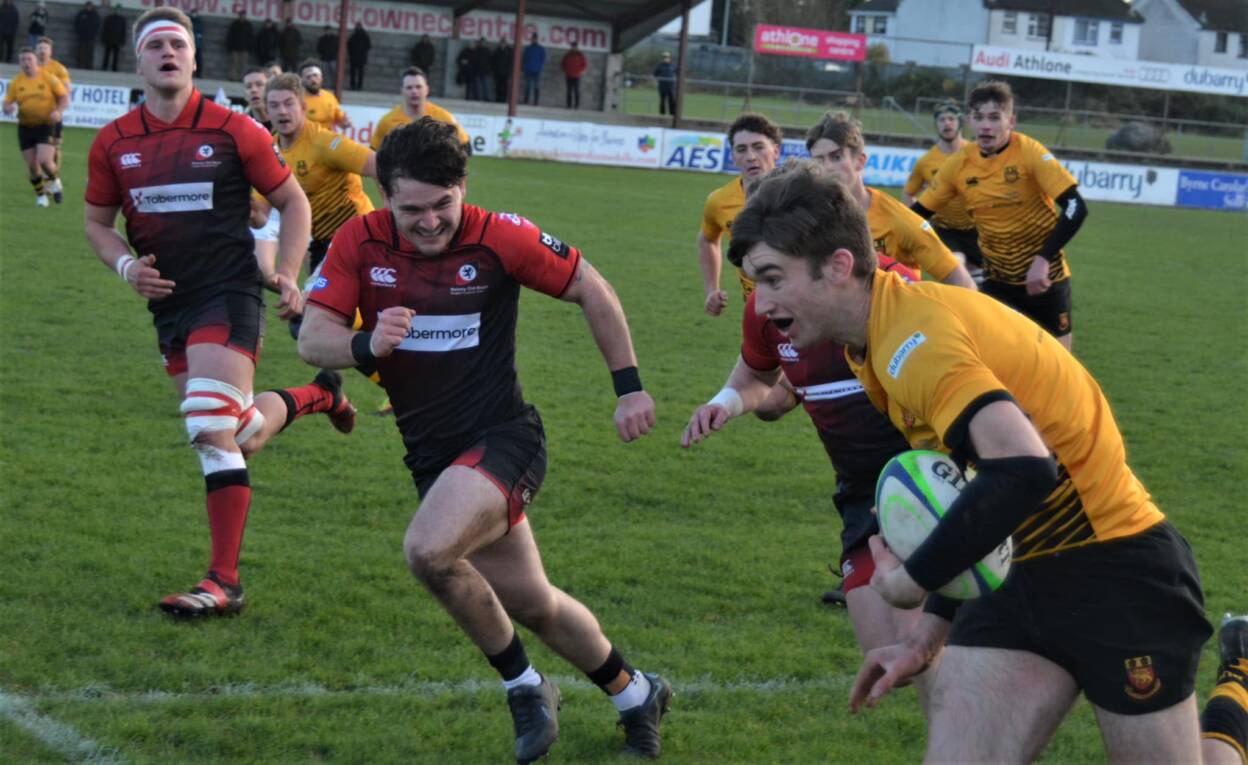 Oisin McCormack burrowed over for Buccs’ opener in the 16th minute, but Rainey centre Connor Fitzsimons broke clear off a scrum to reply against the run of play. Scott McLean levelled with the conversion.

The hosts’ error count increased and Rainey managed to take a 14-7 lead into the break, winger Andrew Donaghy dotting down from a cross-field kick with 32 minutes on the clock.

Kolo Kiripati’s half-time team talk had the Pirates back on track in the third quarter, as they reeled off three tries – two of them from impressive right winger Saul O’Carroll – to lead 24-14.

O’Carroll scored from a kick chase and his own grubber kick, before the Connacht Academy’s Ciaran Booth picked up possession straight from the restart and tore forward from Buccs’ 10-metre line for a superb solo try.

Good work at maul time set up O’Carroll to race along the touchline and complete his brace, with Ruaidhri Fallon converting. Into the final quarter, Shane Layden added another seven-pointer following a Rainey defensive error.

Flanker Calvin Smyth hit back with a third converted try for the Magherafelt side, with Buccs guilty of failing to clear to touch. 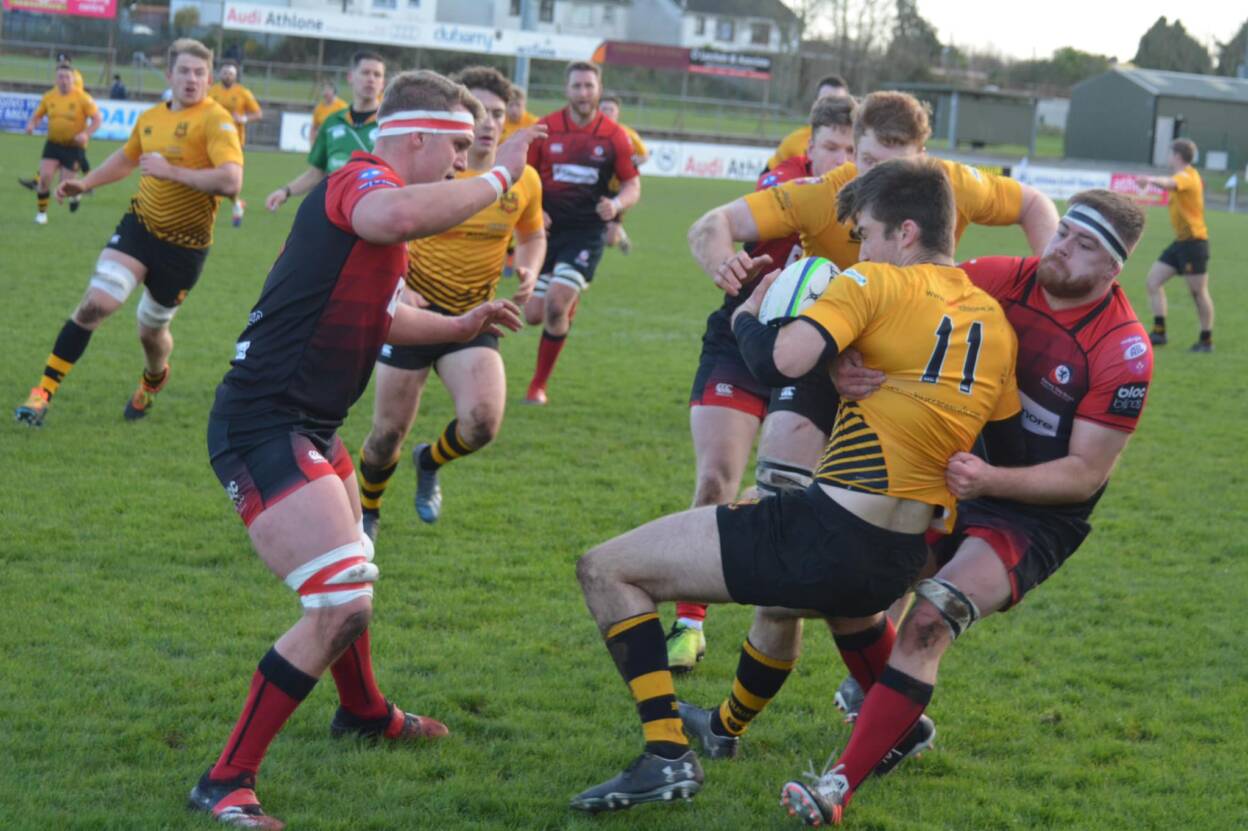 Nonetheless, the Athlone outfit used their bench to good effect late on, and Adam Flanagan’s clever offload put fellow replacement Declan Adamson away, towards the Bounty corner, for a final try.

Incredibly, for the fifth time already this season, Queen’s University scored 40 or more points in a league game as they ran out 40-8 bonus point winners over a gallant UL Bohemians side.

Queen’s captain David ‘Dizzy’ Whitten, playing at lock, was at his rampaging best at Dub Lane, tearing clean through from a ruck for a long-range first try.

He doubled his tally late on with a superb run from halfway, showing great feet to get around full-back Darragh O’Gorman and evade the chasers to go in behind the posts.

The league leaders, who built a 21-3 half-time lead, were always in control. Their other tries came from Scott Martin (2), Ben Heath and Michael Orr, while second row Jay Traynor grabbed a 67th-minute consolation score for UL. 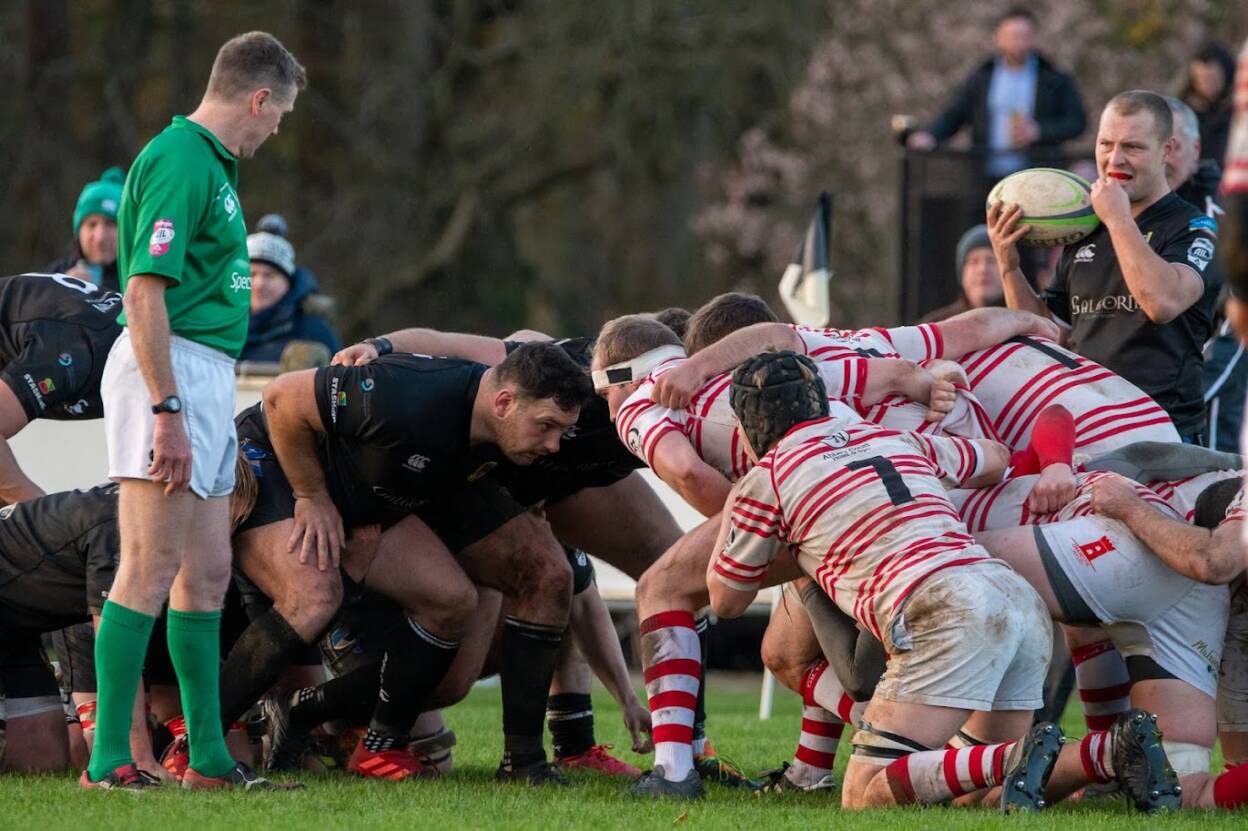 A depleted Nenagh Ormond team went down 46-12 to Ballymena at Eaton Park, the hosts racing into a 29-0 lead before a Kevin O’Flaherty try opened Nenagh’s account just before half-time.

Out-half Tim Small got Ballymena’s attack firing early on, using some nimble footwork to get outside a defender and score in the corner. He added a terrific touchline conversion.

Mark Thompson narrowly missed out on a try before Small sent over a close-in penalty. Flanker James Hume grabbed the next try for the Braidmen, taking three defenders with him over the line.

Nenagh’s big pack briefly got on top, enjoying some decent possession but coughing up some untimely turnovers. Ballymena were clinical, Adam Lamont barrelling over for Small to convert.

The bonus point score was run in by captain Glenn Baillie, who showed good strength to make it over after Ulster Under-19 back rower James McNabney had attacked the blindside from the back of a scrum.

The scrum continued to be a launchpad for John Nicholl’s charges, a pacy attack seeing Rodger McBurney offload for Rhys Ervine to get over in the corner, making it 34-7.

Experienced full-back McBurney got on the scoresheet on the hour mark, impressively slicing through from Ballymena’s 10-metre line before sidestepping around his opposite number and outpacing the cover for the corner.

The sides swapped tries during the closing stages, lock Jonny Browne barging over for Ballymena’s seventh of the day. O’Flaherty used a quick tap to complete his brace for the Tipperary men. 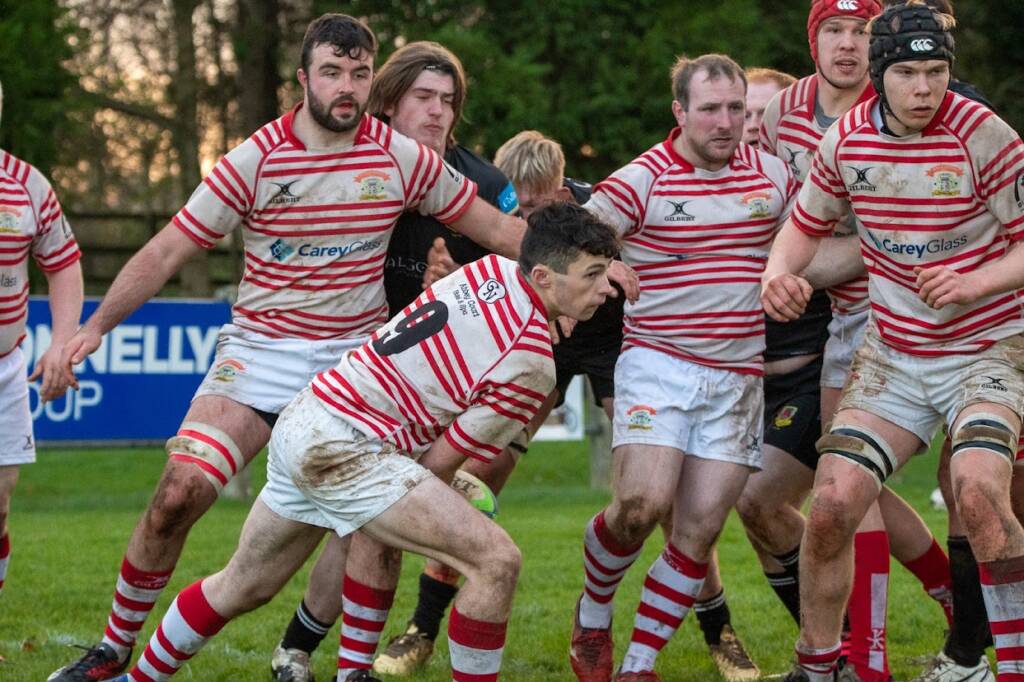