It was a real game of two halves at Ballymacarn Park where league leaders Garryowen beat Ballynahinch 27-22. They crammed all bar a single penalty from Tony Butler into a strong first half showing.

The Light Blues must have had high hopes of notching their fourth straight try-scoring bonus point of the campaign when leading 24-0 at half-time.

However, an early try after the restart from Ulster’s Marcus Rea, who had a terrific game for the hosts, ignited Ballynahinch’s comeback.

James Simpson, with a charge-down, and Aaron Cairns made it three tries for ‘Hinch, but it took a last-gasp penalty from replacement Jack Milligan to secure their bonus point.

Rea and Reuben Crothers were released by Ulster to start for Ballynahinch, along with provincial hooker Tom Stewart. However, facing into a strong breeze, the hosts were out of sorts during the opening quarter. 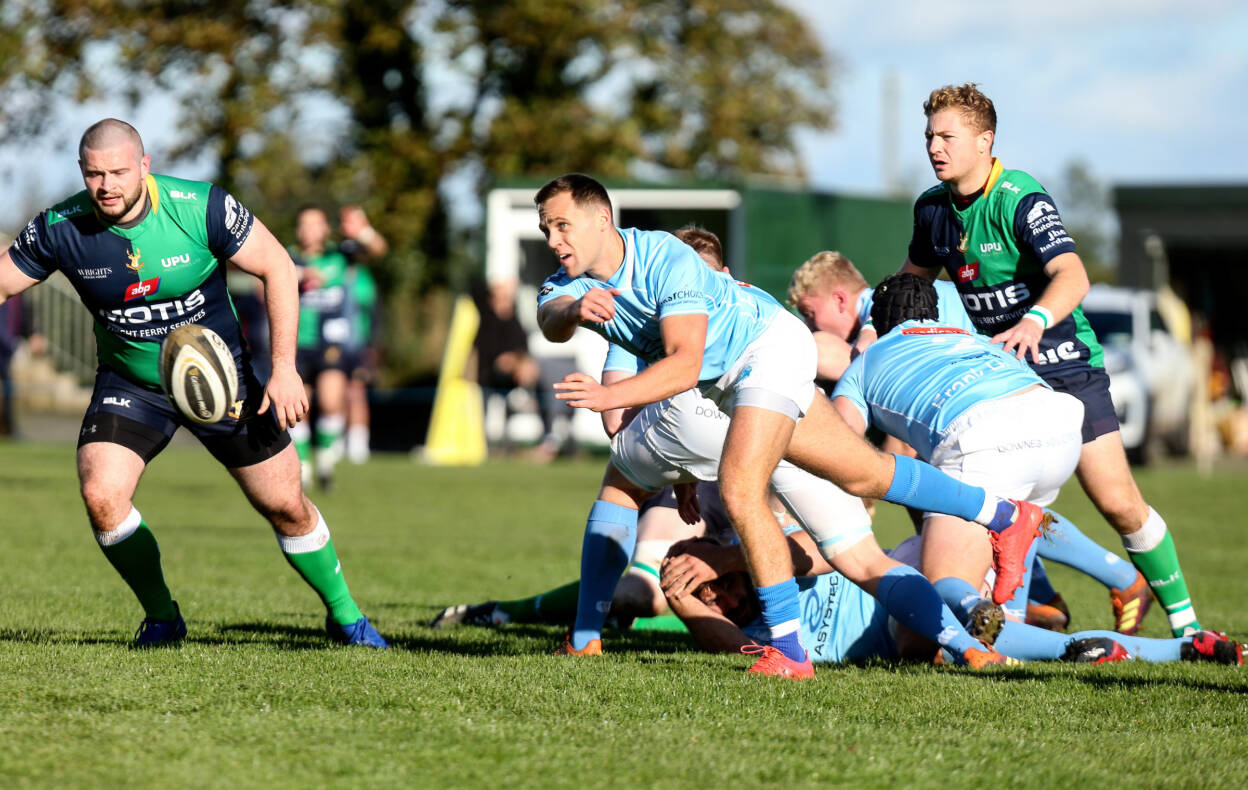 Garryowen were visibly bigger all over the pitch and they cashed in with two almost identical tries. O’Toole scored both, the first coming in the right corner after lock Paddy Kelly had secured set piece possession.

The same two players combined for the next try, this time O’Toole breaking off to the left of the maul for a powerful finish from a few metres out. Young out-half Butler landed both conversions and a penalty.

Ballynahinch were struggling to gain any kind of foothold in the game, and an improved second quarter performance from the home side was undone by another close range Garryowen try.

Just before the break, Ed Barry skipped a few team-mates out with a well-flighted pass, sending the ever-industrious Daly over beside the posts despite Paddy Wright’s last-ditch tackle. 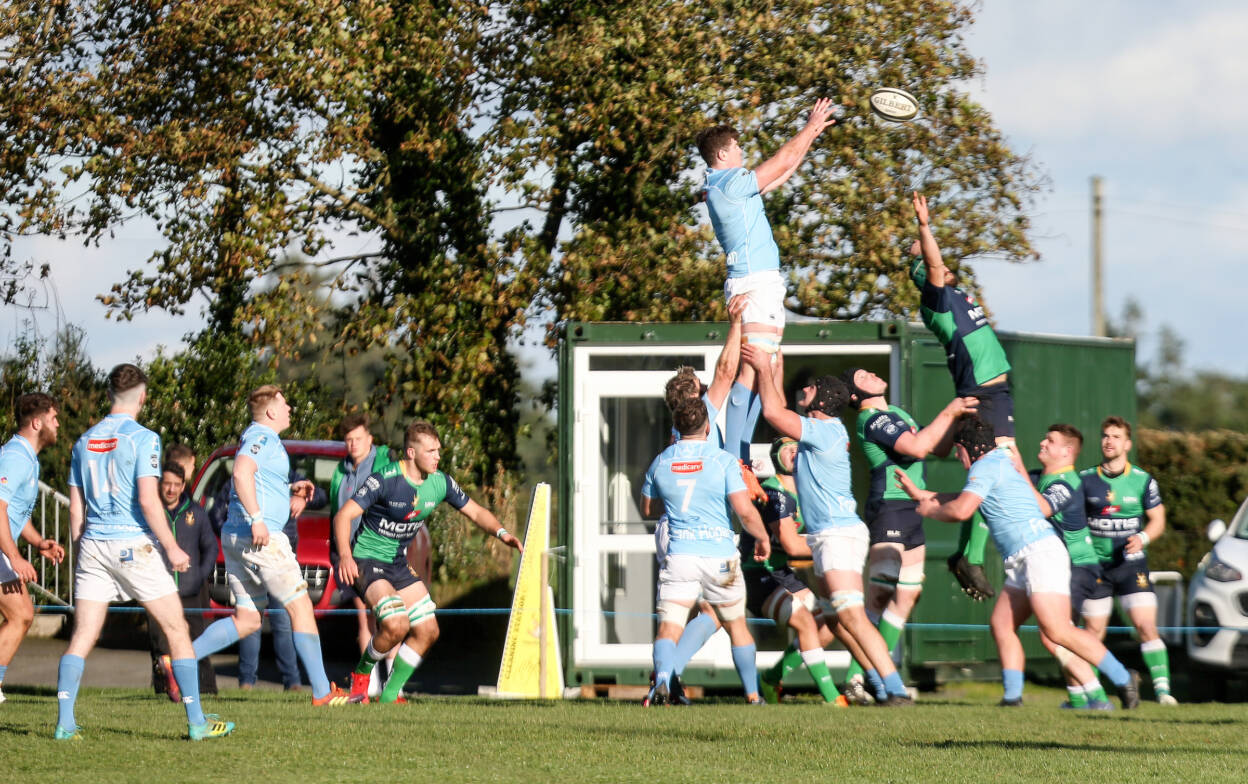 That left ‘Hinch trailing by 24 points and they had been on the wrong side of referee Paul Haycock at the breakdown. The penalty count was very much in Garryowen’s favour and it allowed them to dictate field position and territory.

A fast start to the second half was crucial for Adam Craig’s charges, who clearly upped the tempo on the resumption. They scored from a muscular maul through Rea to get themselves on the board.

The impressive Butler calmly slotted over another penalty to maintain a three-score lead, but that was the last time that Garryowen troubled the scoreboard.

Roared on by the vocal home support, Ballynahinch found their rhythm and piled on the pressure. Replacement lock Simpson superbly gathered his own charge-down to score after 48 minutes.

Greg Hutley knocked over his second conversion to make it 27-14, and there was a growing sense that ‘Hinch could get something out of the game as they snapped into tackles and charged into collisions with much more purpose.

The fleet-footed Cairns then scored from the move of the match on the hour mark. Shane Ball showed serious pace to tear up the blindside from inside his own half. He was hauled down on the Garryowen 22.

The ball was flashed wide from the ruck and superb work from Rory Butler in the wide channel put Cairns gleefully diving over in the left corner. Hutley’s difficult conversion went wide. 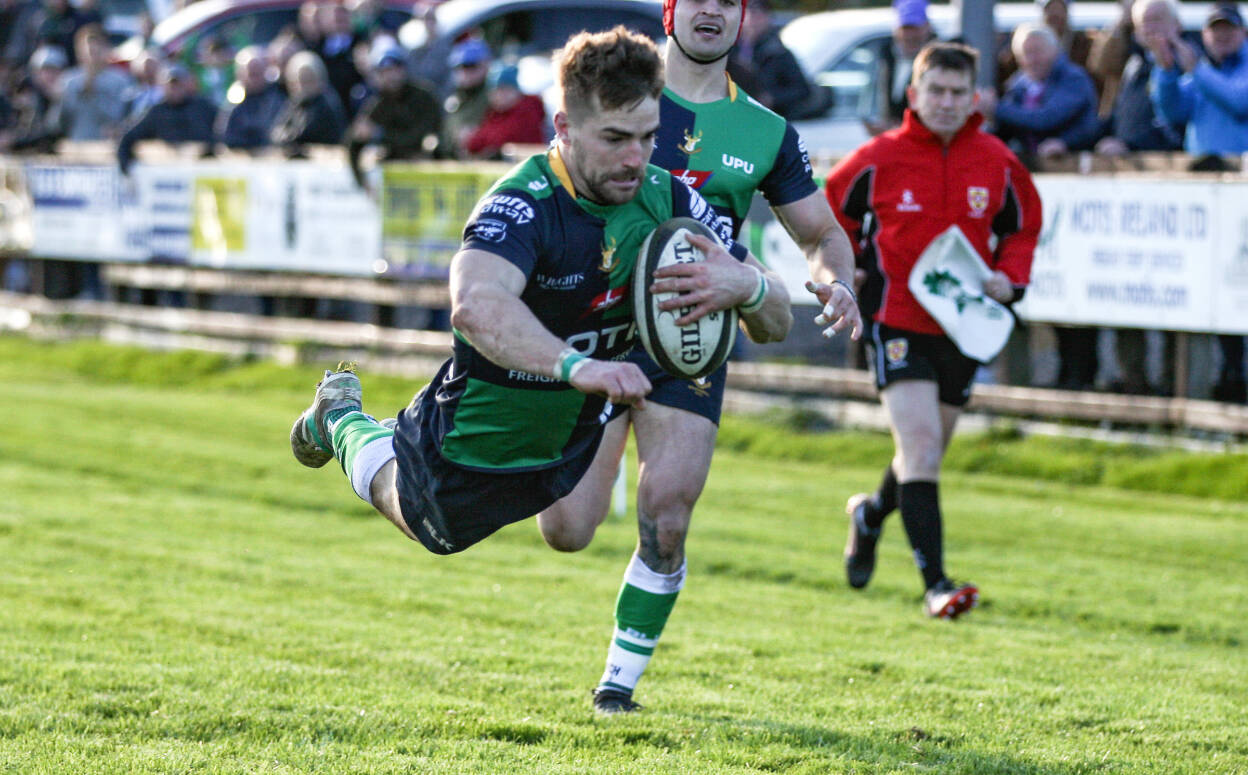 Garryowen were clever in their response, slowing things down in an attempt to suck the energy out of ‘Hinch’s fightback. They managed the game well, showing exactly why they are currently top of the table.

Having turned down a relatively straightforward kick at goal, Ballynahinch lost the ensuing lineout. The possibility of a late home win had now become a desperate chase for a bonus point.

Despite what looked a harsh yellow card for Rea in the 70th minute, the Co. Down side continued to push forward. Milligan missed a penalty after a Garryowen infringement at the breakdown.

However, the same player was presented with a last-gasp chance from an identical position. This time he made no mistake, gaining ‘Hinch’s second point of the league run. 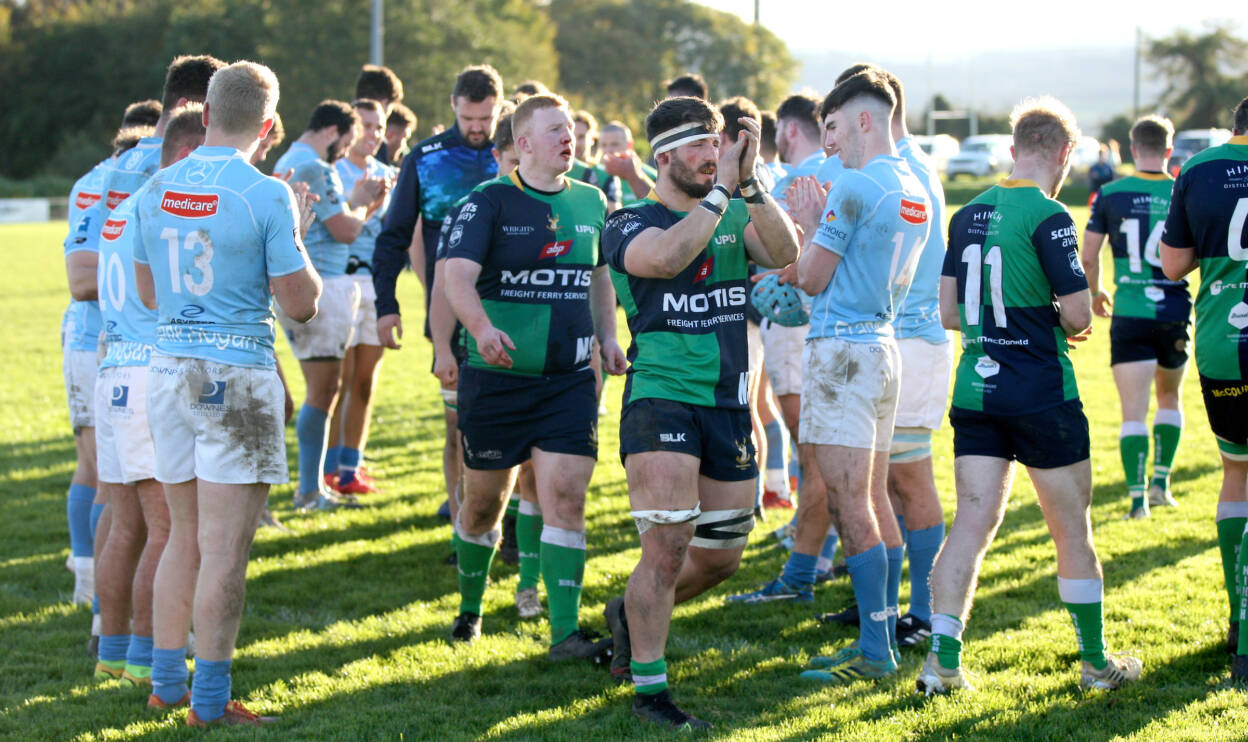