St. Mary's College, who posted their first win away to Banbridge, host unbeaten City of Armagh in round four ©John Mullan/Banbridge RFC

A first win of the campaign is the prize on offer for Navan and Banbridge when they meet in the latest round of Energia Men’s All-Ireland League Division 1B.

Preview: Highfield signed off on the first block of games with an ultra-professional 38-3 dismissal of Naas. Conor Quaid’s men even overcame some unsettling early injuries, with Paddy O’Toole and Dave O’Connell seamlessly making positional changes.

Malone are back at home after two losing trips to Leinster, needing a greater level of composure to put away the chances they are creating. Ulster’s Aaron Sexton is a great strike runner but has been underutilised.

O’Connell reverts to the second row for Highfield, who have Ronan O’Sullivan slotting back in at openside flanker. Sam Burns and Shane O’Riordan come into the back-line, the latter at out-half for the injured James Taylor.

Preview: This fourth round encounter brings back memories of an epic promotion/relegation play-off semi-final in April 2019 which Old Wesley won 20-17. A Josh Miller penalty split the sides after extra-time.

Fionn Higgins, their first round drop goal hero, Matt Stapleton and Tim Murphy return to the Cobras’ back-line, with Naas native Connor Johnson promoted from the bench to start at hooker. 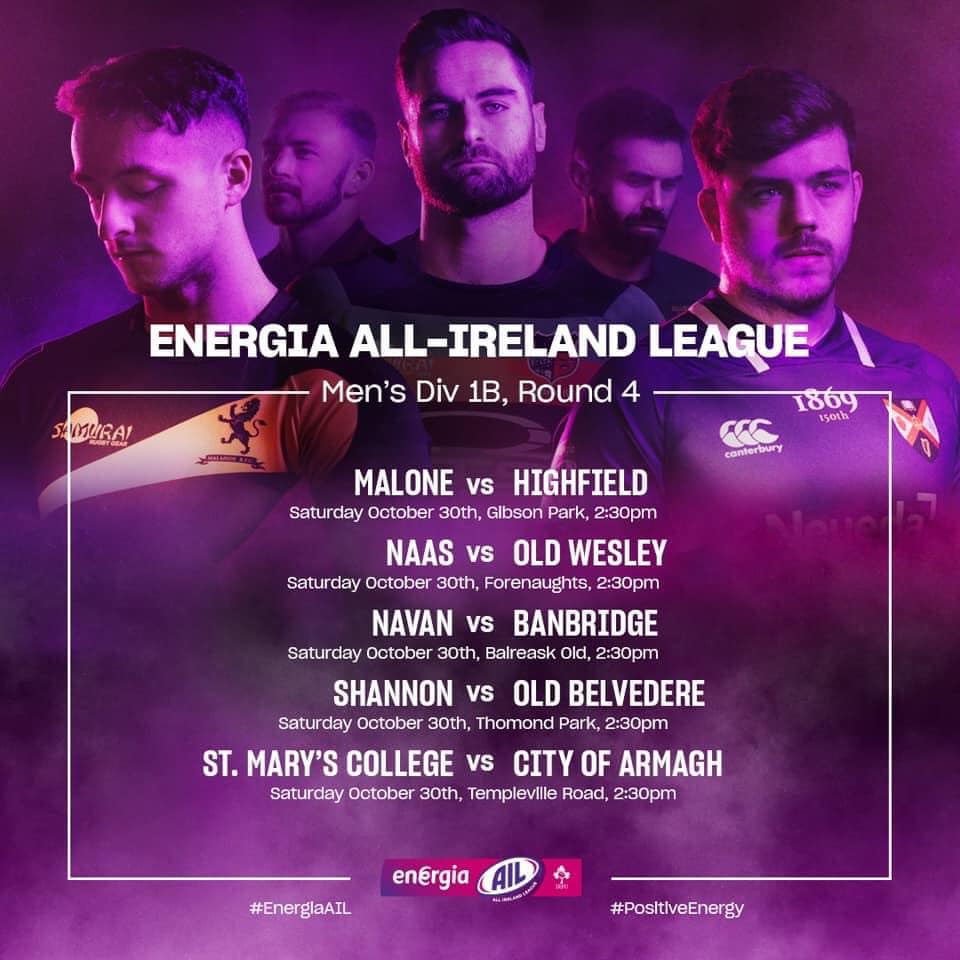 Preview: Navan and Banbridge are both pointless and rooted to the bottom of the table. Bann boss Mark McDowell admitted heads were down following recent results, but he has been encouraged by the younger players pushing through.

Props Josh Chambers and Christian Trimble, coupled with try-scoring replacement Robert Mathers, drew praise for their efforts against St. Mary’s, particularly Trimble who made his AIL debut after taking up the game just seven years ago.

The corresponding fixture in 2019/20 was a real cracker, going right down to the wire as Banbridge prevailed 24-22. Navan blew a 15-point lead and had a last-gasp drop goal effort charged down.

Preview: Old Belvedere have reinforced their front row ranks for round four. James Bollard and Stewart Maguire both start, packing down either side of Leinster Academy hooker John McKee, who grabbed two tries against Malone.

Openside flanker Calum Dowling is the third and final change, while Shane O’Hehir, the former Sligo captain, is added to the bench as Belvedere look for a repeat of their 2019 win on Thomond Park’s back pitch.

Shannon head coach Pat O’Connor commented: “Our squad depth is getting better week on week, the younger players are getting exposed to AIL rugby. We’ve back-to-back home games now, so a win this weekend would give us good momentum.”

Preview: City of Armagh make their first trip of the season outside of Ulster, eager to extend their winning run which came under serious threat from Shannon before a dramatic late penalty try.

Their back row has excelled in recent rounds, with openside James Hanna hailed as ‘outstanding’ the last day by head coach Chris Parker. They did the double over St. Mary’s during the 2019/20 campaign.

Mary’s overcame some untimely injuries to open their win account at Bann. Tighthead Mick McCormack starred in the scrum and as a ball carrier, while Myles Carey is a centre of real quality. He is a potential game-breaker that Armagh will have to stop.