A top-four clash in Armagh and a south Dublin derby in Templeogue lead the list of fixtures in Division 1B of the Energia Men’s All-Ireland League this week.

Preview: Two of the winning teams from the opening round collide, with City of Armagh defending doggedly – minus injured captain Tim McNeice – to get the better of Banbridge.

Giving opportunities to some of the squad’s younger players, Armagh head coach Chris Parker said: “It was great to see 19-year-olds John Glasgow and Romain Morrow make their AIL debuts (last week) and both looked comfortable at this level.”

Old Belvedere, who struck late to overcome Naas, are without injured skipper Connor Owende. Dean Moore leads the side tomorrow, partnered by Paddy Dowling in the second row. Tom Ryan is added to the back row.

Preview: While Aaron Sexton provided the try-scoring fireworks for Malone against Navan, former Ulster prop Tommy O’Hagan, who has joined from Rainey, starred with a player-of-the-match performance.

The scrummaging will be worth the admission fee alone in Naas, with the hosts having the Leinster-capped Adam Coyle at loosehead. Player-backs coach Craig Ronaldson comes in at inside centre, with Conor Halpenny selected at scrum half.

Malone have had some untimely injuries of late, with the likes of Josh Davidson, Teigan Erasmus and Josh Pentland all sidelined, so a win in Kildare would provide a big lift. 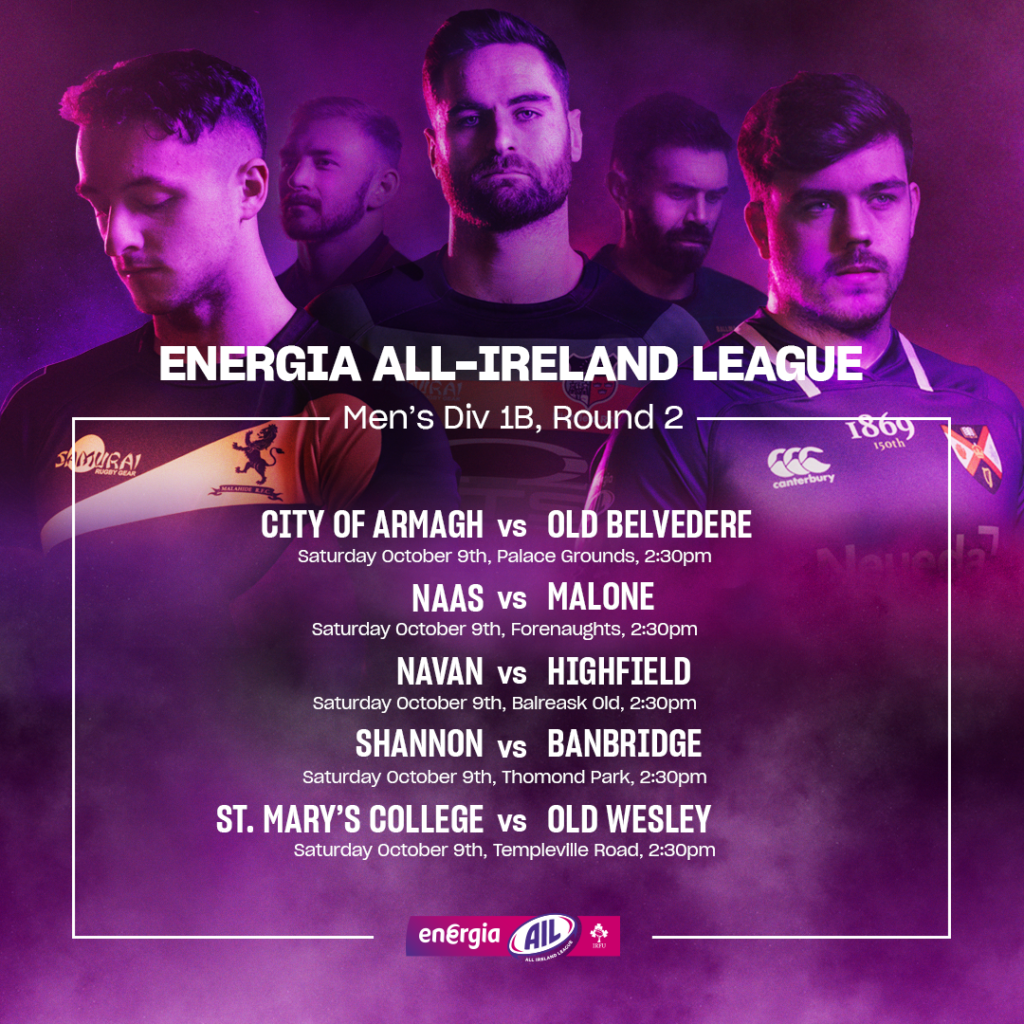 Preview: The general consensus is that Navan look an improved team already this season, but no matter the performance level, Ray Moloney’s men need to pick up league points.

Their South African pair Hardus van Eeden and Liam McLoughlin had a promising introduction to the AIL in Belfast, with the latter kicking seven points. Kiwi hooker Jack Nelson also made his bow.

Highfield had their own fresh faces during the first round, chief amongst them ex-UCC out-half James Taylor who scored 11 points. You would have to fancy a second win for the Corkmen.

Preview: This is Banbridge’s first trip to Thomond Park since November 2017 when they fell to a 33-14 defeat. Mark McDowell’s current crop are hoping to right the wrongs of last week’s reversal against Armagh.

Bann boss McDowell said: “Shannon at home represents a significant test for us. It’s all about nailing our detail in training this week and making sure we step up to the task on Saturday.”

Shannon are also looking to put a frustrating late loss to Old Wesley behind them. A number of Under-20 players are pushing through under Pat O’Connor, who has also welcomed back Jade Kriel and Ben Sargent to the squad.

Preview: A tasty south Dublin derby on the menu in Templeogue, with St. Mary’s College aiming to build on what was an encouraging performance away to highly-rated Highfield.

With his try-scoring cameo in Cork, Conor Corcoran joined his brother, starting lock Liam, as they became the latest set of brothers to play together in the famous blue and white.

It should be an almighty scrap in the engine room where Old Wesley have a formidable pairing in captain Iain McGann and JJ O’Dea, standing at 6ft 5in and 6ft 6in respectively and weighing a combined 208kg.