Enniscorthy and Skerries, the early leaders in Division 2C, take to the road as the returning Energia Men’s All-Ireland League takes in more locations around the country.

Bruff gave away too many penalties last week, with Bangor mining 15 points from those infringements. The performance of Bruff’s maul was a positive and they are always tough to beat at home.

Stephen Keogh’s men are captained again by flanker John Clery, a twelve-year veteran of senior rugby. Skerries, riding high in second place, did the double on Bruff in 2019/20.

Derek O’Sullivan’s side played some sparkling attacking rugby in a nine-try opener against Omagh. Their first trip of the season to Munster will certainly test their mettle.

Under new head coach Ben Manion, Enniscorthy look a very attractive team to watch. Usually a back rower, Nick Doyle showed his versatility against Midleton, lining out at inside centre and scoring two tries.

The table toppers pay a visit to City of Derry, who battled their way to a losing bonus point at Tullamore despite playing half the game with 14 men due to yellow cards. 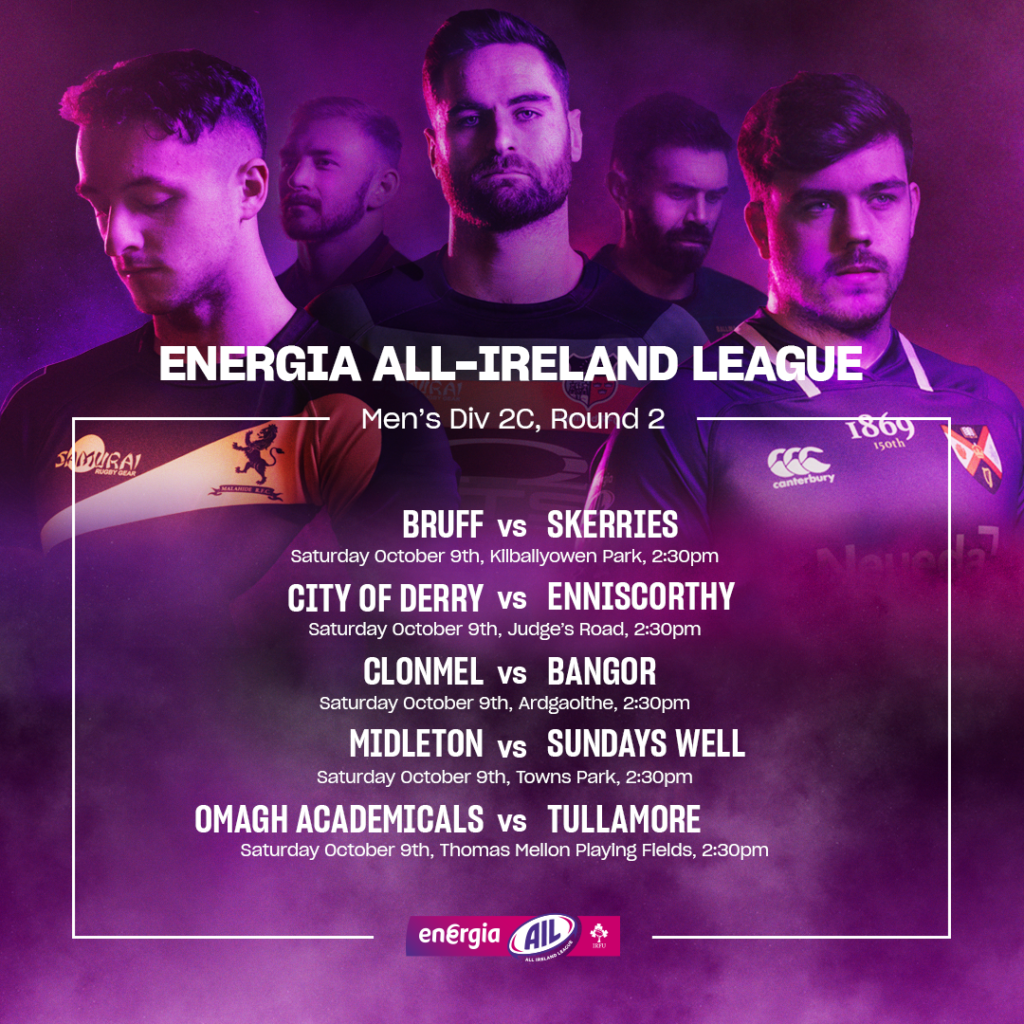 There has been a changing of the guard at Clonmel, with a number of senior players retiring or moving on. The young crop coming through went very close to winning at Sunday’s Well last week.

Backs Conor Pearsons, Luke Noonan and Luke Hogan scored a try apiece in the 17-all draw. Bangor’s Gareth Millar matched that tally with five penalties and a conversion against Bruff.

Experienced coaches Dave Irwin and Brian McLaughlin are now assisting Bangor boss Tom Rock, who explained: “I was conscious of the lads hearing too much of my voice. I was adamant we’d only bring people in if they are a good fit, and we have achieved that with Dave and Brian.”

The combination of a Cork derby, and the opportunity to atone for a disappointing first outing against Enniscorthy, means Midleton will not lack for motivation.

Things can only get better after Mark Corby’s red card ruined the Red Devils’ chances last week. Exciting underage talents Richie Daly and Jack Colbert made their league debuts in the back-three.

Tullamore will need to keep close tabs on Ryan Mitchell, the in-form Omagh winger who has scored five tries in two games. The Accies did well to pick up a late losing bonus point, in the face of a Skerries onslaught.

Getting six league debutants out on the pitch, Tullamore were happy with their lot after beating City of Derry 23-19. Zimbabwean centre Lance Batten shared the player-of-the-match honour with industrious flanker Chris Whittle.

Only six points separated the sides when they met in Tyrone two years ago. Scott Elliott (2) and Kyle Beattie scored Omagh’s tries in a 20-14 victory over the Tulliers.