Munster’s challenge for a first Vodafone Women’s Interprovincial crowd since 2017 gathered serious early pace in Belfast where they ran out 50-5 bonus point winners over Ulster.

Round 1: Claffey Claims Brace As Leinster Bounce Back To Beat Connacht

Prop Chloe Pearse starred with three tries in a player-of-the-match performance, while there were debut scores for Muirne Wall, Chisom Ugwueru and replacement Aoife Moore.

Captain Beth Cregan’s 31st-minute effort was the lone response for Ulster, who trailed 26-5 at the break despite some promising runs from centre Fiona Tuite.

Munster second row Siobhán McCarthy also got amongst the first half tries, with the best of them coming from Kerry’s whippet-like scrum half Wall who scorched 65 metres downfield from her own tap penalty.

Matt Brown’s side broke the half-century barrier in the end, as Ulster, who lost Cregan to a 58th-minute yellow card, conceded eight tries in the end – including newcomer Moore’s muscular 78th-minute closer. 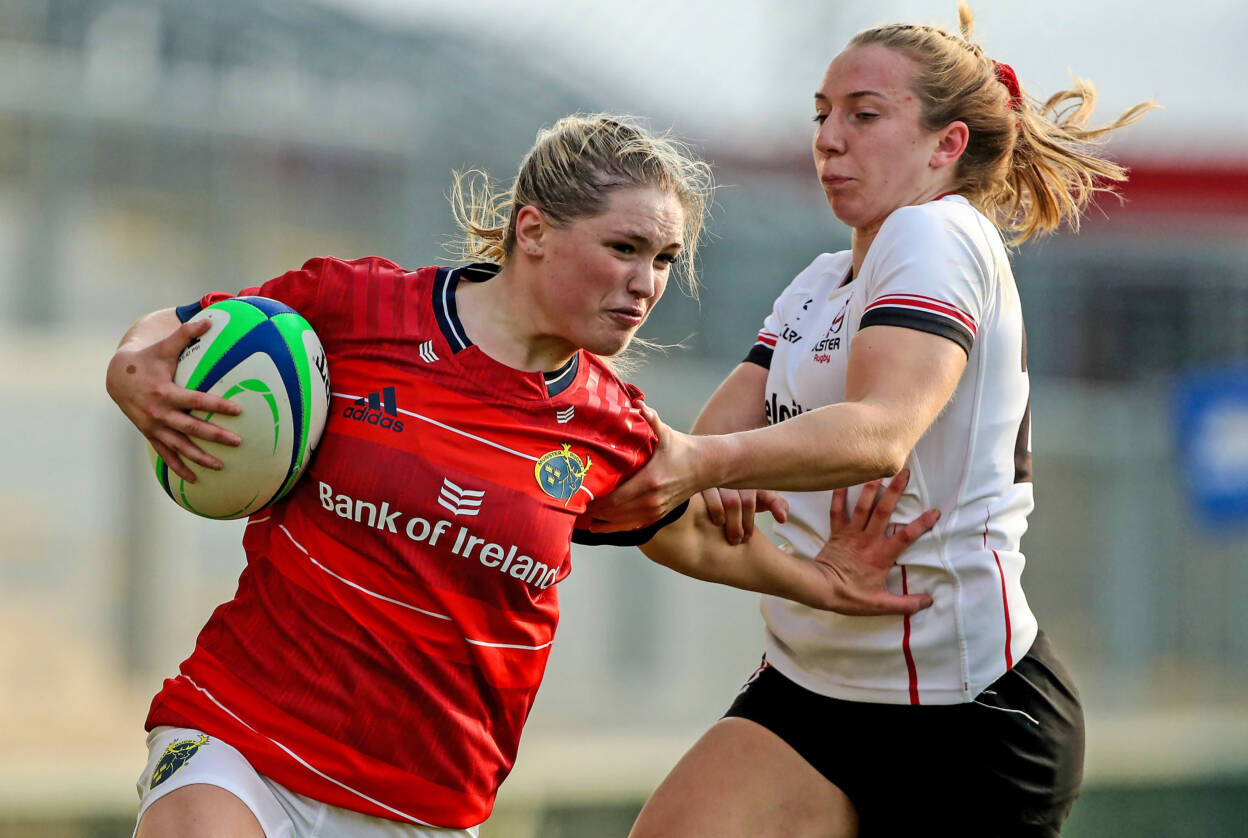 Brown’s first game in charge of Munster got off to a dream start. Just two minutes and 16 seconds in, Pearse picked off the deck to crash over. Nicole Cronin, who finished with 11 points, supplied a well-struck conversion from the right.

Munster’s crisp attacking was rewarded again in the 18th minute, their captain Sarah Quin brought down short before McCarthy was able to muscle over, with Edel Murphy on the latch.

Despite losing winger Laura O’Mahony to injury, the visitors continued to threaten and Wall blazed through from her quickly-taken penalty – just outside the Munster 10-metre line – with Jemma Farrell burned off in pursuit. 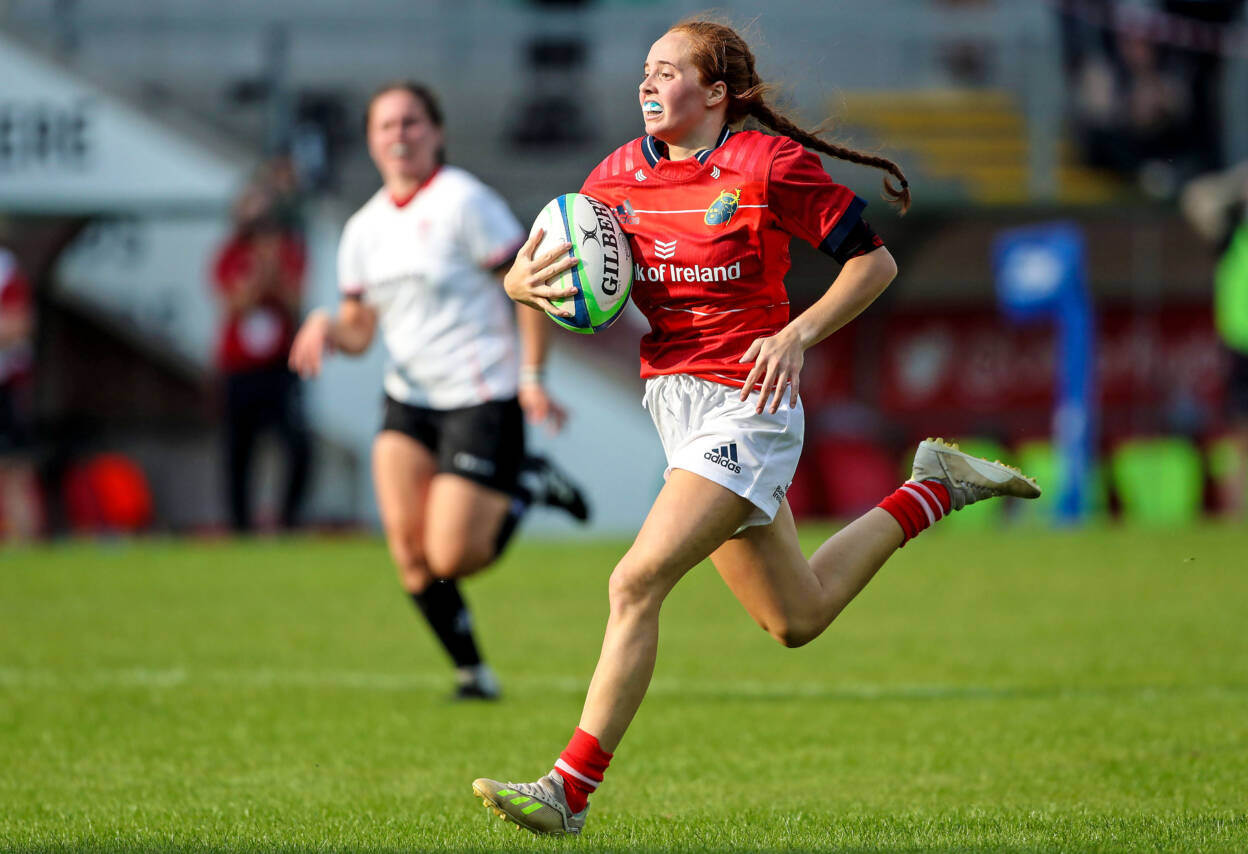 Cronin’s conversion made it 19-0, giving Ulster a huge mountain to climb. A powerful 26th-minute lineout drive showed what they could do, although some of their best first half work was undone by costly penalties.

They did get on the scoreboard when Tuite’s defence-splitting run, and then another carry closer in, led to Cregan’s successful dummy and lunge for the try-line.

However, Munster made sure to have the final say before the break. Some nice passing from Wall, Cronin and Stephanie Nunan had Ennis’ Ugwueru beating the final defender near the left touchline.

Cronin fired over a fine conversion for good measure, and the tries kept coming for the Quin-led Reds in the second period.

Only 39 seconds had elapsed when Pearse completed her brace, following up on Murphy’s initial break from her own half and Allen’s support line.

The sidestepping Nunan created the space for a determined Cronin to squeeze over by the left corner flag in the 53rd minute. The out-half was unable to convert her own try.

Cregan was guilty of not rolling away on the hour mark, earning 10 minutes in the sin bin, but Ulster showed plenty of resolve in he absence.

Indeed, the home bench was making a solid impact, with young Fern Wilson showing her pace out wide in both attack and defence.

Despite some encouraging signs from Neill Alcorn’s charges, Ulster could not prevent Munster from returning to their clinical form during the closing stages.

A rip in the tackle by Allen saw Munster move the ball wide for replacement Maggie Boylan to fly down the right wing. Some quick recycling followed and Pearse went over unopposed from a ruck. 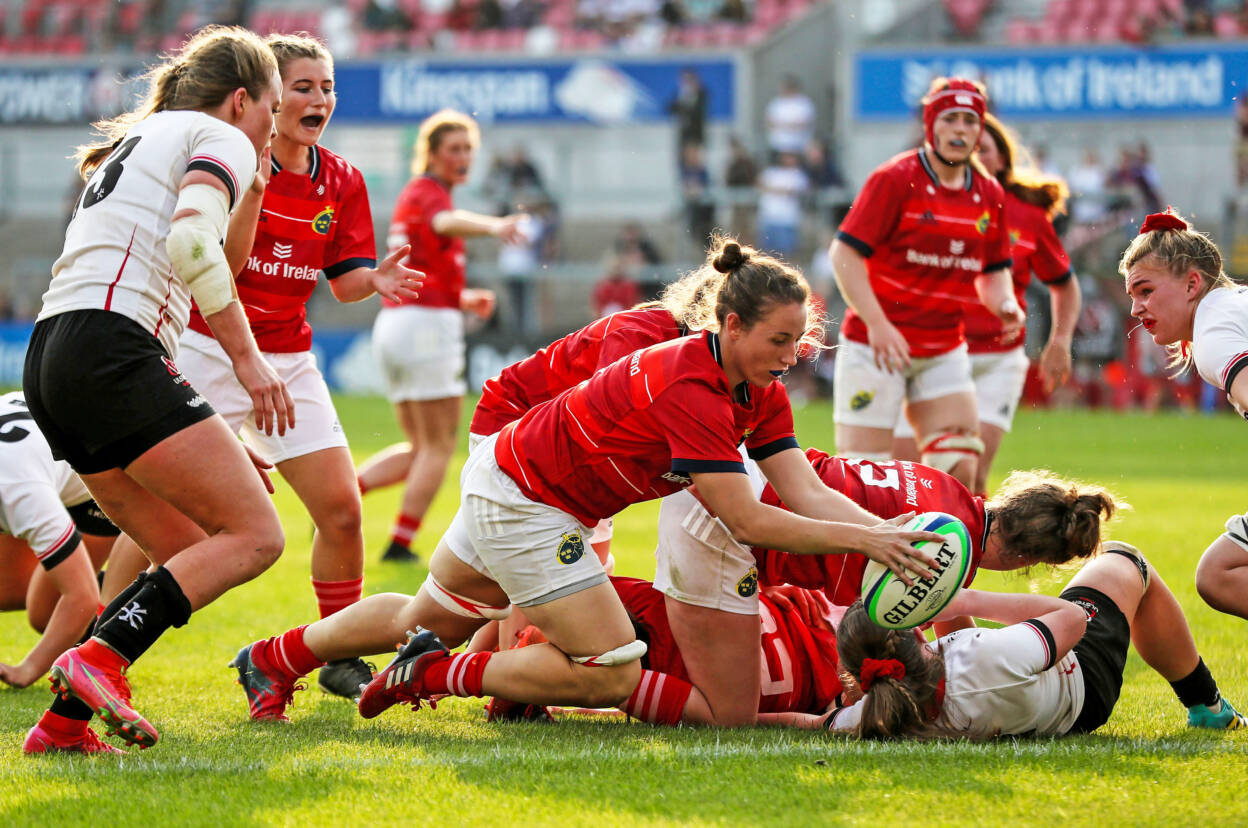 In Cronin’s absence, Allen chipped over the conversion and also added the extras to the victors’ final try. The freshly-introduced Deirbhile Nic A Bhaird wormed her way through before Pearse helped Moore to smash her way over beside the posts.