The Ireland squad are operating in a bio-secure bubble for the Guinness Six Nations. ©INPHO/Billy Stickland

As the final countdown to the Guinness Six Nations begins, and excitement builds ahead of the opening round of matches next weekend, there is no doubt that the 2021 Championship will be different for a variety of reasons as we continue to operate in the enduring shadow of Covid-19.

It is hard to fathom that we are now approaching 12 months on from the last time supporters were in attendance at Aviva Stadium and indeed the absence of those who make the Six Nations what it is from Match Day in Dublin, Cardiff, London, Rome, Edinburgh and Paris will continue to be felt most strongly.

But, behind the scenes, immeasurable and assiduous work has been carried out to ensure the Championship can continue, albeit in a slightly different form, for 2021 and that the staging of 15 Test matches across the next eight weeks will, at least, provide rugby fans around the world with a small dose of goodness during these abnormal times.

The Ireland squad – 36 players and the team’s management – entered their bio-secure bubble at Carton House last Wednesday in preparation for next weekend’s Round One trip to Cardiff to face Wales, the first block extending out to 18 unbroken days at their Maynooth base.

The IRFU’s Covid Committee, formed last April to map out the Return To Rugby, have overseen the implementation of stringent protocols across the four Provincial High Performance Centres and IRFU High Performance Centre in Blanchardstown, where Andy Farrell‘s squad are currently preparing for the Six Nations.

The players and 25 support staff in the Ireland bubble are now PCR Tested twice a week, with daily health checks and temperature scanning also in place to maintain the integrity of the bubble, while there are tight protocols around any ancillary staff – such as support analysts or referees – entering camp.

Since the Provinces returned to training last July, the IRFU has carried out 10,000 PCR Tests with just 0.3% of those returning positive results, while the Union has spent €1.5 million on Covid-related infrastructure, resources and testing programmes.

The Covid Committee is made up of IRFU Medical Director Dr Rod McLoughlin, Performance Director David Nucifora, Senior Operations Executive Jean Casey and Head of Operations Gerard Carmody, who oversees the implementation of the protocols in camp on a daily basis, alongside IRFU Team Operations and Travel Manager Geraldine Armstrong. 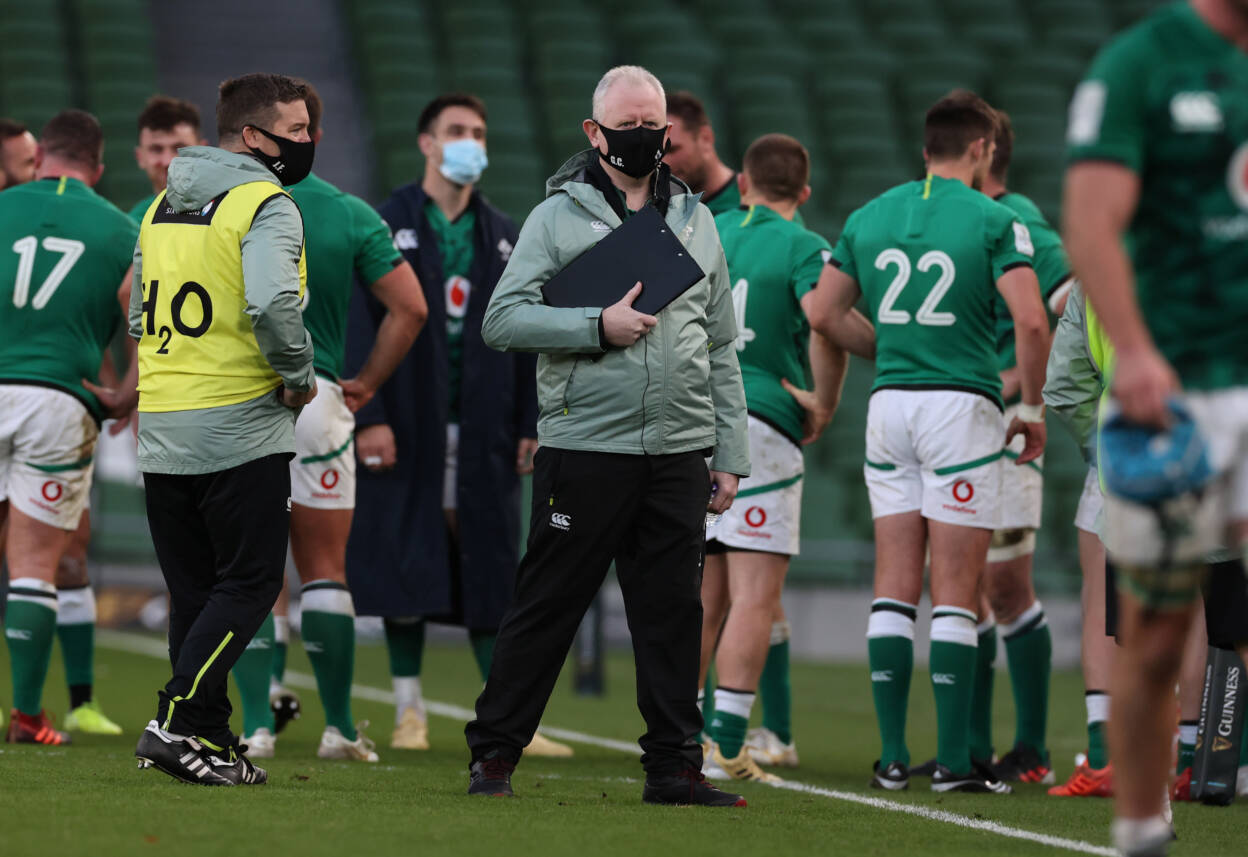 The measures – one player per bedroom, seating plans at meal times and the daily health screening checks among others – in place at Carton House are not unfamiliar to the players, who have been following them at their Provinces since last summer, and indeed during the Six Nations and Autumn Nations Cup window in October and November.

“I have to say that the players have been fantastic at buying into this, they really have,” Carmody says. “We want to stay safe and we want to give the country something to cheer about as well, because I think we’ve all been lacking live sport and some normality. I think rugby and all sports have been great in being one thing to keep the show on the road, so to speak.

“I don’t think anybody who was coming into camp would have said they weren’t looking forward to it. Even with the atmosphere being very different and the stadiums being quiet, you still have that buzz of international rugby and still have the same goals. That hasn’t changed.”

The expertise of McLoughlin, who has been on the Department of Sport’s Covid-19 Expert Group for Sport, has been integral to the safe and successful return of professional rugby in Ireland, while Carmody’s experience has been invaluable in establishing and implementing all the measures in camp on a daily basis.

The working day for the players looks very different, with each squad and staff member travelling from Carton House to the IRFU High Performance Centre in their own car each morning for training while all indoor meetings must take place in large rooms for social distancing and be limited in time. Back at the hotel, there are strict protocols around communal and social areas, with each player now required to wear gloves at the self-service buffets for meals while adhering to all social distancing protocols

As part of tighter measures, all staff at Carton House are now PCR Tested twice weekly in line with the squad’s schedule and face masks must be worn by all inside the bubble at all times, except during meals. Despite all this, spirits remain high in camp as Farrell’s side build towards the Championship campaign.

“I’ve always said that the three most important things that a player looks for when he comes into camp is good wifi, a good night’s sleep and good coffee,” Carmody, who has also worked on two Lions tours, continues. “You get those three things right and you’re on to a winner, no matter where you are in the world.

“Netflix and all those streaming services and box sets are key to keeping us all sane. I think there’s an element too of some video gaming which might go on as well between rooms with their game consoles, but I wouldn’t be an expert in that.”

While it is undoubtedly challenging for players and staff to be away from their families for such an extended period of time, Farrell has fostered a very close-knit group and certainly there are support structures in place for anyone that may require them during the eight-week campaign.

“The coaches are great, as are the staff and medics, in working with people,” Carmody adds. “And if someone is a bit down we can throw an arm around them, but there are the support services there, should somebody need them, and we would be proactive in assessing how people are.”