He picked up his first senior international cap at the Aviva Stadium on Friday and now Ulster’s Billy Burns is eager for more chances to impress in the Ireland jersey.

Named in the matchday 23 for the Guinness Series opener against Wales, Burns was brought on when captain Jonathan Sexton went off with a hamstring injury, just shy of the half hour mark.

The talented 26-year-old stepped confidently into the breach, converting a brace of penalties to keep Ireland on course towards an eventual 32-9 win.

While a head injury brought his debut to a premature close inside the final quarter, it did little to take from the occasion for Burns. Speaking today at the IRFU’s High Performance Centre, he said:

It was incredible. It was a strange old week. Obviously being late coming into the squad, there was a lot of stuff to learn. A lot of time with my head in the notebook.

“I had been in camp before and the calls have all stayed pretty similar, but just refreshing my mind. It’s not the circumstances you want to go on with Johnny obviously pulling up with an injury, but it was probably the best thing for me.

“It just chucked me out there in the deep end before I knew. I was sort of going into the game expecting if I got 20 minutes I’d be over the moon. To get on at 30 minutes was huge.

“I loved every minute of it. It was a really enjoyable experience. The boys made it easy for me to come in and sort of just fit in.

“I think now it’s just about taking that next step. I’ve had a little taste of it and hopefully I can improve going forward and get more opportunities.”

A couple of things need to happen before Burns can be assured of picking up his second cap against England at Twickenham this Saturday (kick-off 3pm).

Firstly, he will have to pass all the necessary return-to-play protocols, having already undergone a head injury assessment at the Aviva Stadium three days ago.

Secondly, he will need to be named in Andy Farrell’s squad for their second game in Group A of the inaugural Autumn Nations Cup, which is set to be released on Wednesday.

Even though captain Sexton has been ruled out of this contest – leaving Burns and Ross Byrne as the two out-half options in the squad – nothing is certain until Farrell unveils his team selection.

“If I can tick all the boxes in the return-to-play protocols, which I’m trucking along well with at the moment, then hopefully I’m in the conversation for sure,” said the former Gloucester player.

“If I get that opportunity, whether it be starting or off the bench, it will be great to get to put on the shirt again. Hopefully contribute to the team getting a big win over in Twickenham, which is one of the toughest places to go.”

Playing at Test match at Twickenham is something that is familiar to Burns’ brother Freddie, who picked up five caps for England between 2012 and 2014.

The elder Burns sibling had a memorable international bow of his own, replacing Owen Farrell (son of Ireland’s current head coach) in the latter stages of a 38-21 triumph over New Zealand at the London venue back in December 2012.

Billy greatly welcomed the support of Freddie and the rest of his family in the lead-up to last Friday’s Celtic derby, even if it put him on edge to a certain extent.

“I’ve got three older brothers and we’re all very tight. There were messages before the game. I was pretty calm going into the game, but every time I got a message from one of them it was the thing that probably made me most nervous.

“You don’t want to let any of those guys down. There was some great support, they sent me some nice videos before the game.

“It was a hugely proud moment for not just myself, but my family and all the people who’ve helped me along the way to get to this stage.

“Like I said, I don’t want to be in for just one game. I want to try and get back in that squad, and play regularly. Plenty to improve on, but it was a huge amount of pride from both myself and my family.”

Whereas Burns could be facing the country of his birth this weekend, he had the opposite experience during the England Under-20’s successful World Rugby U-20 Championship campaign of 2014.

Back then, the Bath-born number 10 was part of a talented English outfit that defeated Ireland in a semi-final in Auckland before getting the better of South Africa in the final at Eden Park.

In a side captained by current England star Maro Itoje, Burns scored 14 points from tee to guide his U-20 side to a 42-15 victory. There were a number of faces that are now familiar to Burns in the Irish line-up, including the aforementioned Byrne and Garry Ringrose.

From Gloucester to Hartpury College and on to his current base in Belfast, it has been a whirlwind journey through the professional game so far for Burns, who now shares the same international set-up as Byrne and Ringrose.

Hoping this is just the latest chapter in a long and rewarding career, he admitted: “It has been crazy. Obviously I played age-group with England and then had a career with Gloucester which I loved. I loved my time there.

I always knew that I was Irish-qualified, obviously through my grandfather (from Cork). The opportunity came up to go to Ulster first and foremost. It was just an opportunity that I couldn’t turn down.

“I felt it was the best place for me to go and improve as a rugby player. Push on and hopefully play international rugby.

“It’s strange, but all the decisions I’ve made to get to this point have sort of come to fruition I guess, because I managed to get out there on the weekend. I don’t want to be a guy who plays once and disappears, and just goes away again.

“It’s been a strange old journey to get here, but again one day I think I’ll look back with an immense sense of pride. I’m happy to be here and happy to be trying to put my best foot forward.”

Since securing a Grand Slam on the final day of the 2018 Six Nations at Twickenham, Ireland have suffered three straight defeats to England. 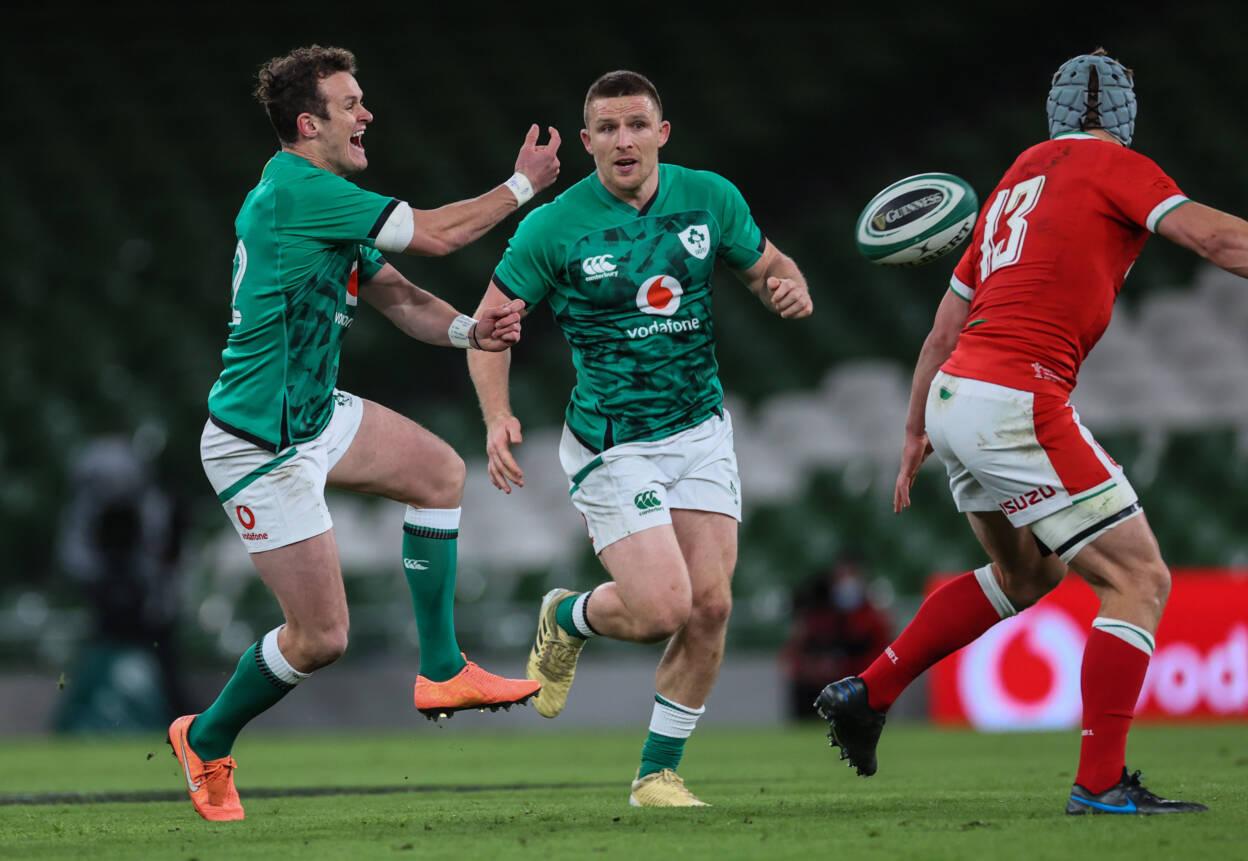 Burns acknowledges that taking on Eddie Jones’ current crop will give a good indication as to how far this Ireland team are progressing under Farrell.

“I think we spoke a lot lately that we’re a new group coming together with a lot of young guys coming in. A lot of guys earning their first caps and stuff like that.

“We’re at the beginning of a journey, but we make no bones about it. We want to be winning trophies as soon as possible. I don’t think we’re going to judge ourselves off anybody else.

“We know how good we can be and the levels we can get to. We’re very much focused on ourselves getting better and not looking too much outside of others.

“We’ve shown over the Six Nations, and coming back in that, there has been ups and downs, but we’re working hard to get through and hopefully get good performances out on the pitch.

“Again, there’s no bigger challenge than going to Twickenham this weekend. Ultimately the result will be a good marker of where we are as a squad and what position we are in going forward.”