As international debuts go, the versatile Hugo Keenan could not have asked for much more at the Aviva Stadium on Saturday.

Having earned a call-up to the Ireland squad on the back of impressive performances on the wing and at full-back in recent weeks, Keenan was named on the left wing for the visit of Italy  for the rearranged Guinness Six Nations fixture.

The 24-year-old duly enjoyed an explosive introduction to Test rugby, scoring a brace of first-half tries to put the hosts in the driving seat. He was unfortunate to have another try ruled out, but it was a minor inconvenience on an otherwise perfect day for Keenan.

“It was an unbelievable experience. The stuff of dreams really. The lads put in some shift and made it easy for me. To nab two tries as well was pretty special,” he acknowledged in the post-match mixed zone.

“As Ed Byrne said, I don’t know if the third one would have come about if the second try hadn’t been disallowed. I’d take two any day. I was just sort of at the end of the work of the others in fairness. I was just finishing them off.”

Keenan and Byrne were amongst a quartet of debutants on the day, the others being their Leinster colleagues Jamison Gibson-Park and Will Connors. Keenan was particularly pleased to see Connors deliver a player-of-the-match performance that included the bonus point try.

The pair were previously a part of the IRFU’s Sevens Programme and also played together for the Ireland Under-20s. Keenan explained:

Will is one of my best mates, probably my best mate in rugby. It was so cool. Our Dads get on very well together and there’s a good connection between the families.

“We made our European Cup debuts against Saracens about a month ago and we’ve sort of been going up the ranks together. It was really, really special. To see him go so well and get man-of-the-match. Put in so many tackles and do what he does best, it’s just great to see. He deserves it in fairness.”

While Connors missed out on Ireland’s run to the World Rugby U-20 Championship final in 2016, Keenan was a key figure in that particular group alongside several current senior stars. James Ryan, Andrew Porter and Shane Daly were all regular starters in the side, while Jacob Stockdale was the full-back of choice for then-head coach Nigel Carolan. 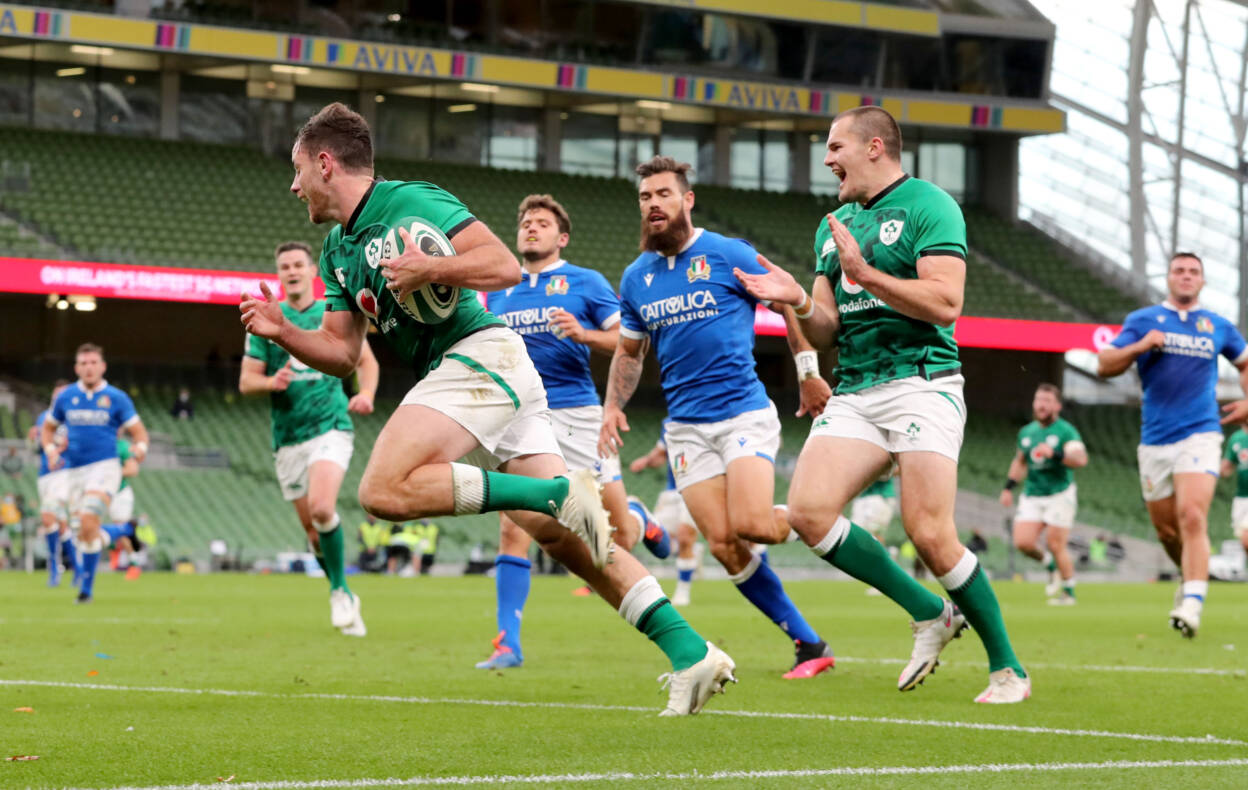 It was there that the Ulster ace featured on Saturday and Keenan was grateful to Stockdale for helping him to bed into his new surroundings.

“Obviously we know each other from Under-20 level. He’s been so good integrating me into the squad here. He’s a good communicator and he bosses it from 15.

“I thought he was very good again today (Saturday). He’s an exciting player and he’s got those three key abilities – he can run the ball, he can pass and kick. He’s a top quality player in fairness.”

Although Stockdale, Ryan, Porter and even Max Deegan have preceded him in earning a senior cap off that Under-20 squad, Keenan always believed a day like Saturday was a possibility. Rather than pinpointing a particular moment where he realised it could become a reality, he believes it was more of a gradual process.

“It’s always just tipping away and trying to keep putting your hand up in every situation. Whether that was in the Sevens or through my first few caps with Leinster. Then it’s just about improving week-on-week and building.

“You don’t really look too far into the future. It’s always about the next game, the next performance. I think if you focus on that, it will leave you in a good place.”

In grabbing two tries on his Ireland debut, Keenan immediately doubled his tally in Leinster blue which currently stands at one try in 20 appearances. His only previous five-pointer in professional 15s rugby arrived way back on December 1, 2018 against the Dragons in the Guinness PRO14.

Predictably, this is something he was given a constant reminder of within Ireland camp.

“The lads have been giving me a good bit of stick, James Lowe especially! It’s nice to get that off my back. A long time coming really.” 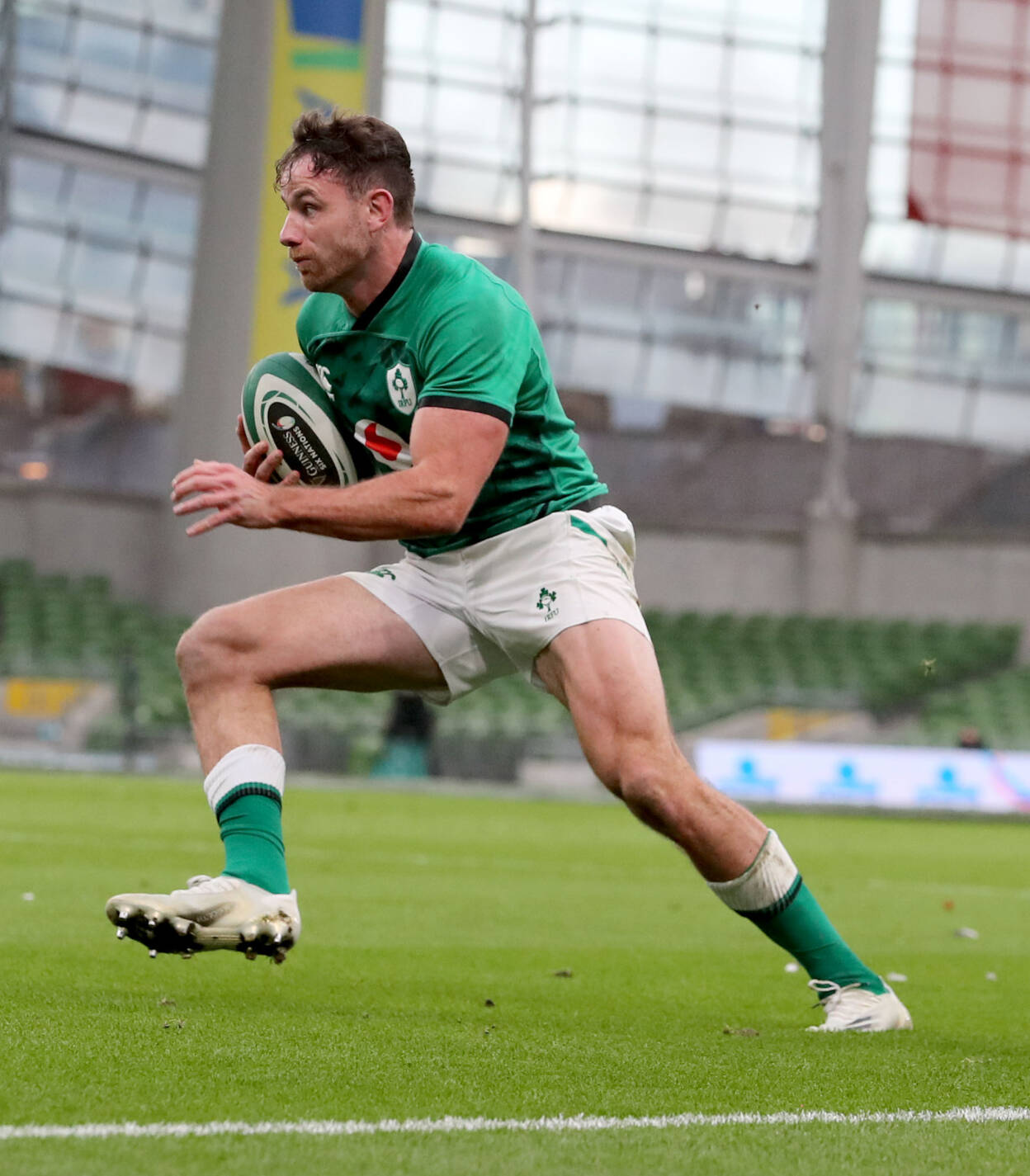 Because there were no spectators in the stadium due to Covid-19 restrictions, Keenan admits scoring his first international try was not quite what he had envisaged it to be. Nonetheless, it was a moment that will stay with him for the rest of his career.

“It was a bit different than I might have imagined growing up, but it was still very special. The lads celebrating with you, it’s such a cool feeling. Just to help them in the first half to get those early tries, they came at important times. To help the team like that is extra special.”

Unlike many of his provincial team-mates – Saturday’s other debutants being notable exceptions – Keenan is just getting used to the methods of head coach Andy Farrell. Based upon his last few weeks in the squad, he is looking forward to working under him in future Ireland camps.

He just wants you to express yourself and be yourself. Be comfortable in the environment and then that will transfer onto the pitch. He’s been great.

“He has been chatting to me all week. Him, Catty (Mike Catt), Richie Murphy. They’re all very good and it gives you such confidence going into the game and good belief. I think that showed in the game with all the lads really.”