Des Kavanagh has created a notable piece of Irish rugby history by becoming the first member, since the foundation of Co. Carlow Football Club in 1873, to be elected President of the Irish Rugby Football Union.

The new President has represented Leinster Youth Rugby for many years and is the first representative of Youth Rugby to be election President of the Union. 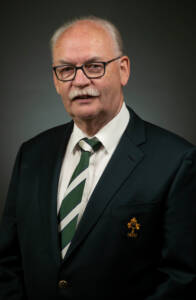 He assumed the highest office in Irish Rugby at the IRFU’s virtual Annual Council meeting on 23rd October, 2020 following a distinguished contribution to the game at Club, Provincial and Union level.
In becoming the 132nd President of the IRFU he is also the first representative from a Junior club in Leinster to hold the office since Pat Fitzgerald (Longford RFC) in 2013/’14.

A former General Secretary of the Psychiatric Nurses Association of Ireland (1991-2017), the new Union President is married to Marie and has 5 children, 3 boys and 2 girls.

A former President of Co. Carlow 2000/’01 when the club was promoted to the All Ireland League, he was also President of Leinster Rugby in 2008/’09 when they won their first Heineken Cup.

Following his term as President of the Leinster Branch he served as the Branch Honorary Secretary 2009 to 2012.