Having admired them from afar for several years, Dorothy Wall is delighted to be lining up in the same Ireland back row as Claire Molloy and Ciara Griffin for Saturday’s Six Nations encounter with Italy.

Following eye-catching displays off the bench during the opening three rounds of the Championship, Wall has been given the nod at blindside flanker for her first international start.

The 20-year-old talent tagged in for Griffin in the home victories over Scotland and Wales, before replacing Cliodhna Moloney as part of a reshuffled pack late on during last February’s defeat to England.

Griffin’s versatility sees the Ireland captain moving to the number 8 role for this round four match, paving the way for Wall to get her first call-up to the starting XV.

“I’m really excited,” she said in a pre-match video call. “I was delighted to get my first cap in February and we’ve kind of been building since then. It’s great to start.

“Not much changes from my perspective in terms of my prep and things, but I’m very excited. I’ve watched them both (Molloy and Griffin) play for years. What I lack in experience they make up in abundance.

“I feel very safe in the back row. They’re wise heads so I’m looking forward to playing with them.

“She (Molloy) is just a wealth of knowledge and such a calm head on the pitch. I’m trying to be a leech off her and ‘Junior’ (Griffin) and get as much information from them as I can so we can all perform. Very exciting.” 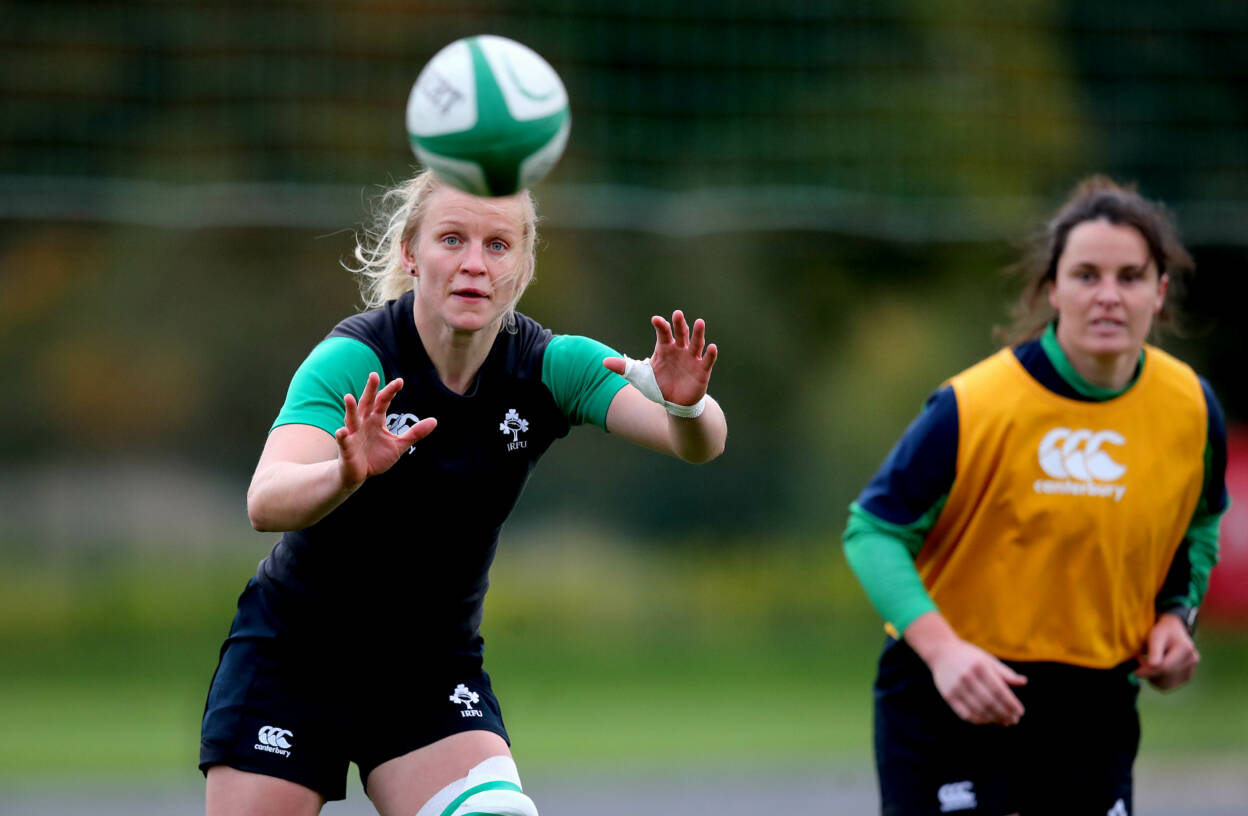 Ireland are seeking a return to winning ways this weekend which would consequently achieve the stated goal of a 100% home record in the 2020 Championship.

Rather than dwelling too much on their 27-0 reversal to the English in their most recent outing, Wall stressed they were focusing on the plus points of their performances to date and hoping to build on them for the concluding fixtures.

You look at the mistakes you made obviously but also look at the positives. We were six or seven months in lockdown, we’re not going to be thinking about the negatives of that English game the whole time.

“There were so many good things that happened over those three games and I think we’re all just looking forward to getting back and working on those mistakes.

“Working on what we did well too and get to a better point. Hopefully that can continue in the coming months.”

Like a number of players within the squad at present, Wall has been working on the frontline as Ireland continues to fight against the spread of Covid-19. A radiography student in UCD, she is currently on a work replacement at St. Vincent’s Hospital in Dublin.

Considering how stressful it can be to work in this environment, the spectre of training and Test matches is a nice distraction for Wall.

“Being in a hospital, it’s very regimented what has to be done in order for everyone to be protected. We’re thoroughly briefed on everything in the IRFU as well, so there’s no aspect of my life that isn’t very much aware of the Covid situation.

“All the precautions necessary are taken in the hospital so PPE where necessary, social distancing, hand washing, masks.

“Obviously it’s going to be at the highest level in a hospital so in that sense, there could be no more boxes ticked. Getting on the pitch and contact. I like contact so I suppose I missed it.

“I wouldn’t say I look forward to getting out of the hospital and going hitting a few people but I enjoy the contact aspect of the game! As athletes, it’s part of our genetics to want to get out and train. That endorphin release after long days, I don’t know what I’d do without it.”

Before settling on rugby as her sport of choice, Wall was a gifted basketball player and even spent time on an Irish development squad.

It was not until transition year in Presentation Secondary School in Thurles that she seriously took a shine to rugby and, despite some initial concern on her father’s part, she took to the oval ball with considerable aplomb.

She revealed: “My brothers always played and my Dad was afraid I was going to get hurt, and then one year I said, ‘look, Dad, I’ll be grand, I’ll get a good gumshield and fire away’.

“If I wanted to do it, he had no say in it. But he just didn’t want me to get hurt. That was his thing. He’s my biggest fan now.

“I started playing basketball in school on the midlands team and I was on a bit of a development Irish squad as well. That was my main love for four years.

“And then I played a season of rugby with Munster underage with Enya Breen and Emily Lane. Came back (to basketball) and got fouled off in the first game so figured I should stick to the rugby.”

A senior international debut can be daunting for some and when a previously-uncapped Wall was tasked with replacing Griffin in the second half of Ireland’s Six Nations opener against Scotland in early February, there was suddenly a massive weight of expectancy on her shoulders. 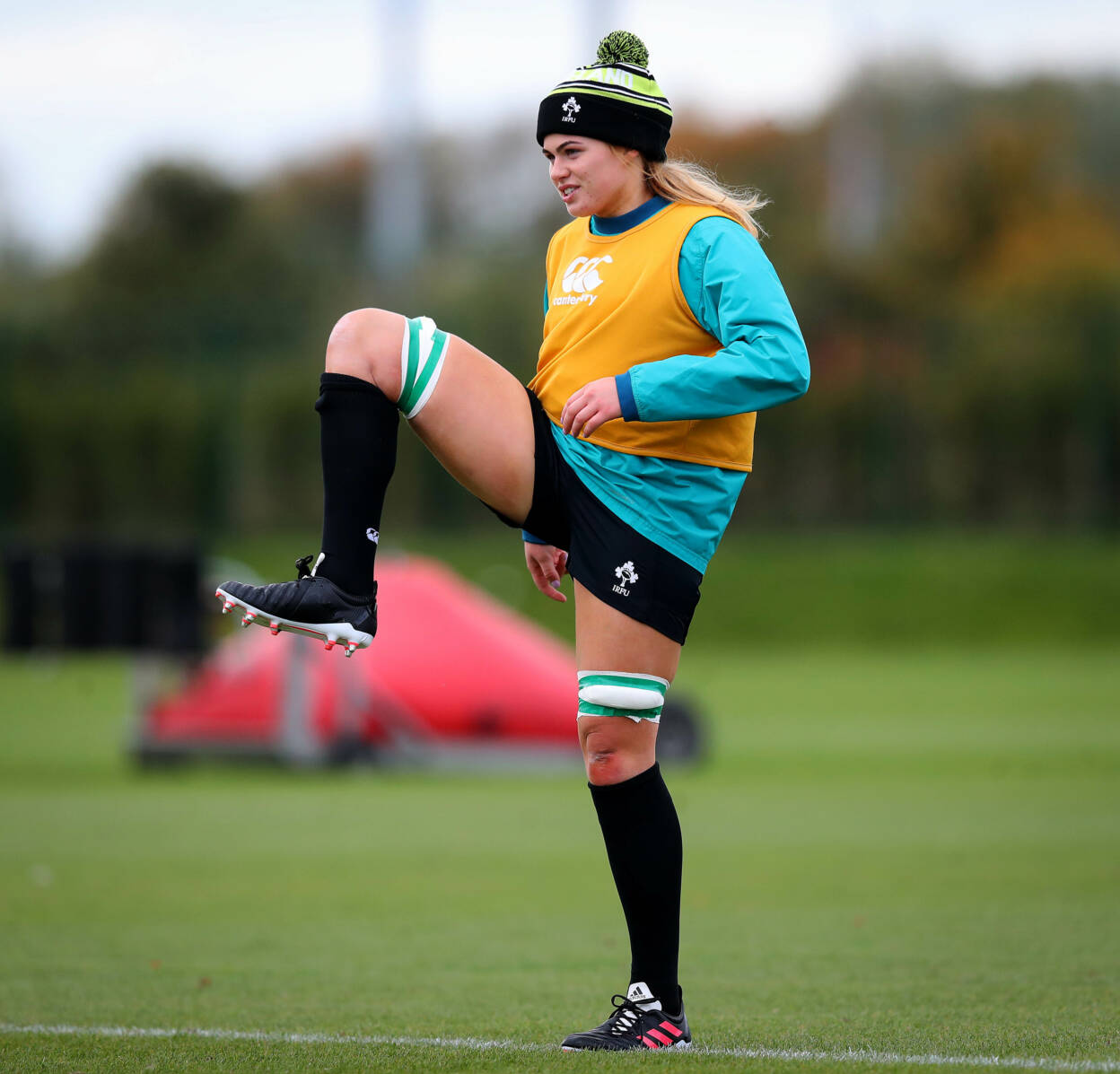 Yet, the Fethard native stepped seamlessly into the breach and got the Ireland supporters in Donnybrook on their feet with a series of powerful carries out of defence.

“I wasn’t nervous. I was so into it on the bench, I nearly exhausted myself in the first half, so in my mind I was on the pitch,” Wall says of her Irish bow.

“But I was ready to get out there and once you make that first tackle, it settles your nerves. Ciara had me well versed so I was happy to get on the pitch and do something for the team.”

For that major milestone in her rugby career, Wall was watched on in the stands by her close friends and family. Unfortunately, that will not be possible on Saturday with the Irish Government’s level 5 restrictions ensuring the game will take place behind closed doors.

Nonetheless, Wall keeps in constant contact with those closest to her and expects them to give a full assessment of her fourth appearance in the green jersey.

My mum rings me about seven times a day wondering about different things and my gran is the same! They’re very much in tune with what’s going on.

“I’m sure they’ll all be watching at home in Tipperary and I’m sure I’ll have post match analysis with all of them after.”