Dublin University came through their stiffest test yet in the Energia Community Series when edging out Terenure College in a 10-try classic at Lakelands Park.

Terenure’s barnstorming start for a 24-7 lead had them on course for their first victory of the campaign, but Trinity turned the tables in the second half to take a 36-31 verdict.

It was a superb advertisement for All-Ireland League rugby as both sides played with an attacking verve and there were some fine individual performances from Harrison Brewer, Adam La Grue, Rob Russell and returning Trinity captain Max Kearney.

Brewer made a welcome return at number 8 for Terenure, who paired debutant Cathal Marsh and Tim Schmidt together at half-back. The latter duo had an armchair ride early on, with Under-20 hooker Levi Vaughan impressively charging over for a brace of tries inside 11 minutes.

The students’ lineout maul was also working well, sending Kearney over in the 16th minute. However, ‘Nure had their bonus point by the half-hour mark, scoring again from a lineout before Brewer expertly drew in two defenders to release prop Dewald Barnard for the left corner. 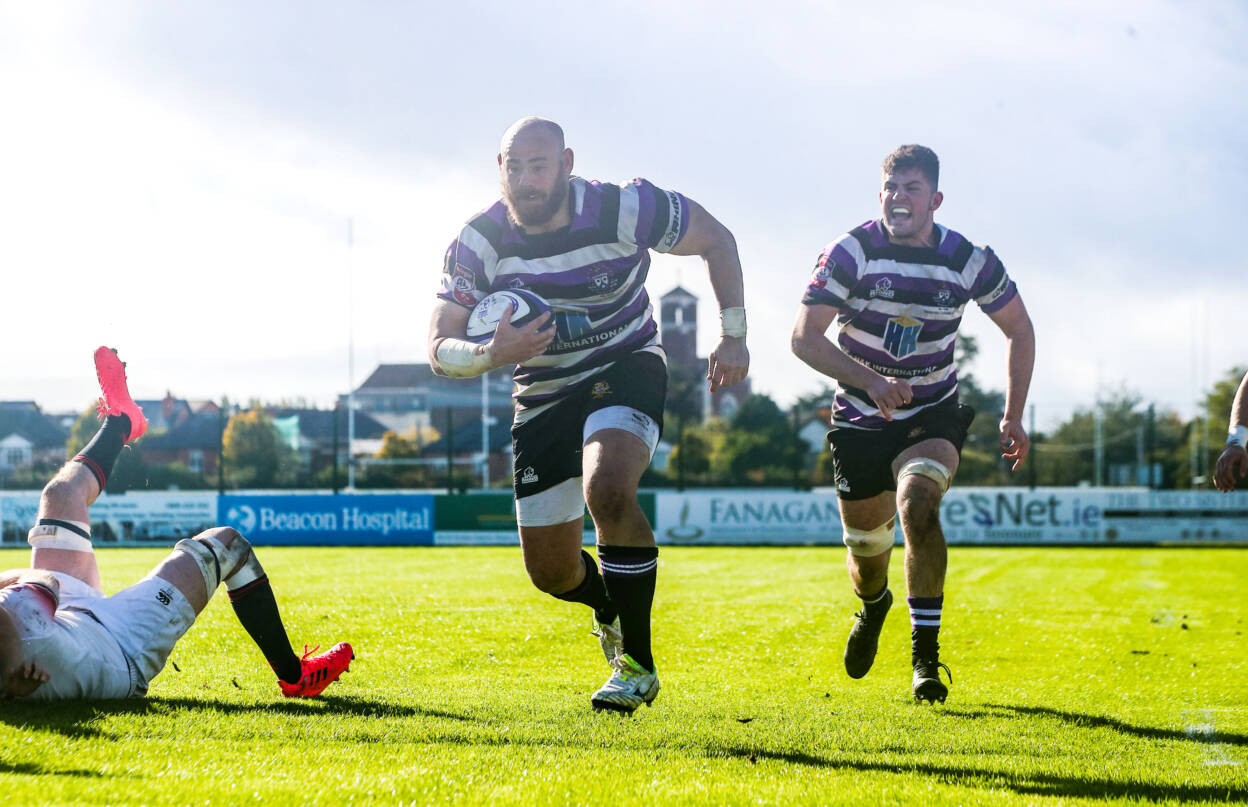 Trinity had lost back rower Anthony Ryan to the sin-bin at that stage, but they scored a galvanising try before half-time to cut the deficit to 24-12. A well-worked forwards drive had Mark Nicholson mauling over, wide on the left.

It was the spark for a run of 26 unanswered points as the Leinster Conference 1 leaders seized control of this end-to-end encounter. Profiting from a Sam Coghlan Murray yellow card, Trinity winger Liam McMahon cut back inside to score after the fit-again James Hickey had made a big impact off the bench.

Full-back Russell converted and then took centre stage with some terrific build-up play for two tries. He sped downfield on a kick return and fed Ronan Quinn for a smart finish in the 52nd minute.

The same fleet-footed pair combined again six minutes later, Russell brilliantly wrongfooting two defenders before getting a one-handed offload out the back door for Quinn to go over in the right corner.

The difficult conversion was confidently struck by Russell and, suddenly, it was 33-24 to the in-form visitors. There was no sign of Terenure flagging, though, and a relentless period of scrum pressure earned them a 72nd-minute penalty try. The students’ indiscipline saw them lose two front rowers to the bin.

It was all hands to the pump for 13-man Trinity with just two points in it. La Grue had a try disallowed – he was held in the tackle – before Russell coolly landed a long-range penalty, steadying the ship for the table-toppers who held ‘Nure out in the dying minutes thanks to some stout defence. 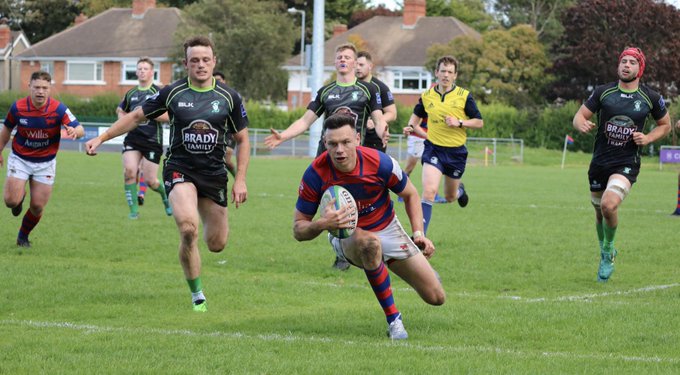 Hooker Dylan Donnellan and captain Matt D’Arcy claimed two tries each in Clontarf’s 34-7 bonus point success at home to Naas. The Kildare men were unable to reach the levels they hit against Trinity last week, with their lone score at Castle Avenue run in by centre Gary Kavanagh.

Clontarf were already 27-7 to the good by half-time, with Angus Lloyd’s quick tap creating an opening 12th-minute try from Cormac Daly. Scrum half Lloyd’s inviting flat pass put D’Arcy in at the posts five minutes later, before a smashing break from inside his own half by Michael Noone released Lloyd for the right corner.

Naas enjoyed a brief purple patch following ‘Tarf lock Fionn Gilbert’s sin-binning for a high tackle. Tim Murphy’s nicely-delayed pass put Kavanagh in behind the posts in the 22nd minute, but two well-taken maul tries from Donnellan – taking him to four for the Community Series – had the hosts well clear.

Defences were on top for much of the second period, Naas’ next score proving elusive despite the best efforts of busy prop Adam Coyle and player-backs coach Craig Ronaldson. The result was sealed in the 70th minute when Michael Courtney’s return pass out of a tackle sent D’Arcy weaving over to the left of the posts.

Old Wesley are up to third in the table after coming from behind to beat neighbours Old Belvedere 30-18 at Energia Park. Ireland Under-20 scrum half Ben Murphy got amongst the tries for the hosts, along with Nathan Randles, Sam Illo, Luke Thompson and Tommy O’Callaghan.

St. Mary’s College lost 13-10 at home to Lansdowne whose powerful pack had a crucial say in the outcome at Templeville Road. The hosts leaked a penalty try and also watched Charlie Tector slot over two closing penalties to steer Lansdowne over the finish line.

It had all started in encouraging fashion for Mary’s, who edged ahead in the 12th minute thanks to winger Matthew Oppermann’s excellent footwork to cut inside two defenders and then outside full-back Liam O’Sullivan again for a classy converted score.

Right on the stroke of half-time, Lansdowne’s scrum forced three penalties, five metres out, and they were rewarded with a levelling penalty try. Mick O’Gara, a cousin of Jonathan and Jerry Sexton, kicked Mary’s back in front in the 56th minute with a close-range penalty. 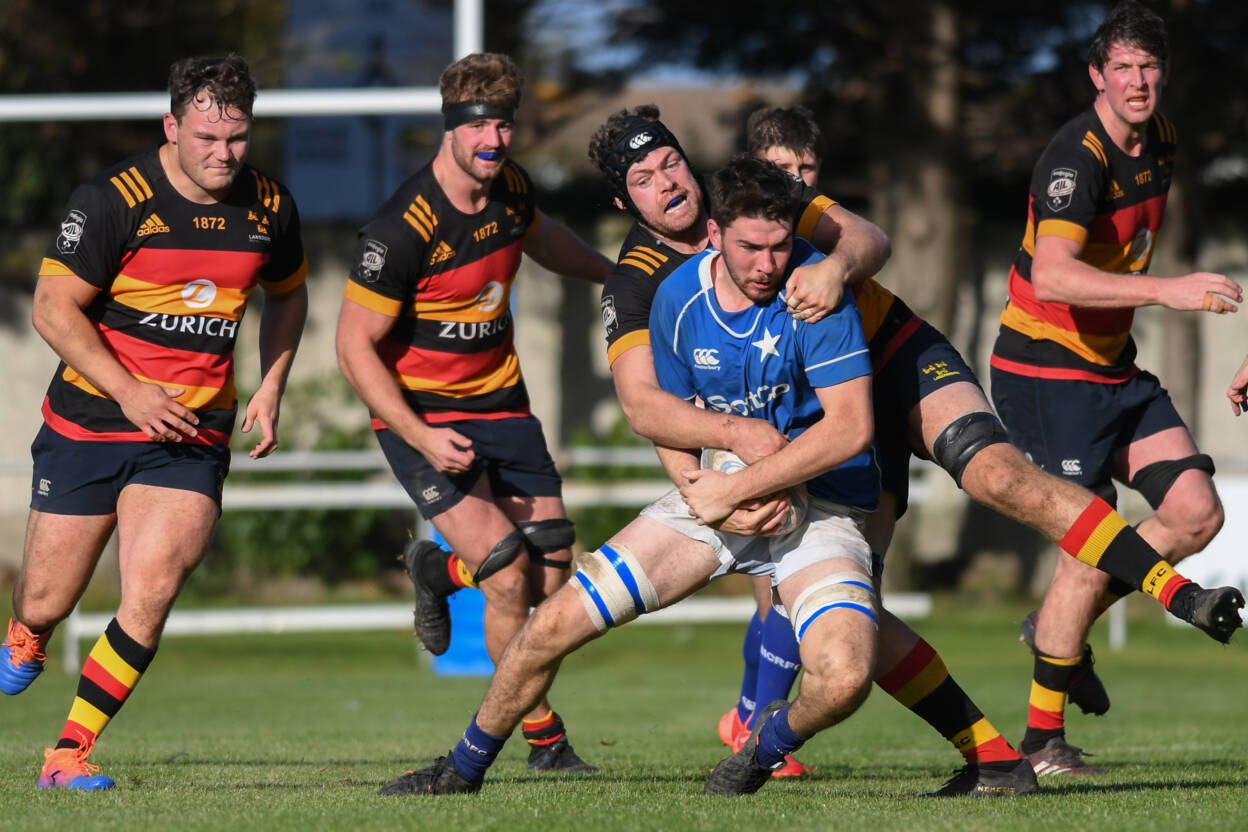 Back in Dublin following the Southern Kings’ liquidation, second row Jerry Sexton got game-time off the Mary’s bench, but it was a Lansdowne replacement who decided it. Tector split the posts in the 58th and 70th minutes to make it two wins out of two for Mark McHugh’s young team.

In Leinster Conference 2, Division 2B rivals Greystones and Wanderers played out a hugely entertaining clash at Dr. Hickey Park where the Chaps came from 12 points down to emerge as 38-24 bonus point winners.

Replacement Ronan Mannion’s late try gave ‘Stones their own bonus point, but Wanderers were that bit more clinical and some of their scores came from a charge-down, an interception and a penalty try. Conor McQuaid, Sean Goodburn and Mikey Russell all crossed the whitewash.

Malahide’s first home game of the series ended in a 21-10 success against a tigerish Tullamore outfit. Following up on John Shine’s seventh-minute converted try, Mals captain Damien Butler crossed from a close-range ruck to double their lead in the 16th minute.

Second row Sean Halligan eventually profited from a Tullamore fumble as the visitors’ try-line was breached again midway through the first half.  Nonetheless, the Offaly men, who were facing into a strong wind, got on the front foot and some clever interplay released winger Craig Cantwell for an unconverted score.

Turning around with the elements in their favour at 21-5 down, the Tulliers enjoyed long spells of second-half possession and territory. Malahide leaked a high number of penalties and paid the price with two yellow cards, and eventually flanker Shine’s dismissal for a second yellow late on.

Winger Conor Lennox was Skerries’ only scorer in their 52-5 beating by MU Barnhall. Holmpatrick’s all-weather pitch was very much to Barnhall’s liking as they tallied up eight tries, with braces from Paul Nalty, Eoghain Quinn and Adam Chester, while there were single scores from Dan Murphy and stalwart hooker Gareth Murray.

Meanwhile, following the correct application relating to Covid-19 guidelines, one third round fixture in Leinster were cancelled – Blackrock College v Navan. The score is recorded as 0-0 and both teams are awarded two points.