Sligo took away maximum points from Heffernan Park in the only game played in Connacht’s Conference. There were some closely-fought matches in Munster, including Old Crescent’s cracking comeback draw away to Division 1A club UCC.

Captain Diarmuid O’Dowd-Hill’s early try set Sligo on their way to a 36-14 bonus point victory in Ballina. Paddy Pearson’s men took advantage of the cancellation of the Galway city derby to move seven points at the top of the Connacht Conference.

Two tries either side of half-time from Calum Goddard did further damage for Sligo, and the flying Kiwi winger duly pocketed the bonus point from a well-taken hat-trick score.

The best of the tries came from out-half Euan Brown’s ghosting break from deep, Hubert Gilvarry provided timely support and a peach of a pass out to the right for Goddard to gleefully race home.

Nice passing between Brown, Goddard and Guilherme Coghetto put Philip Carter over for try number five, but Ballina had the final say in the 66th minute. Ronan Molloy and Brian Boland were both prominent carriers before replacement Niall Keane sniped over from a ruck, adding to Marc Feeley’s first-half try. 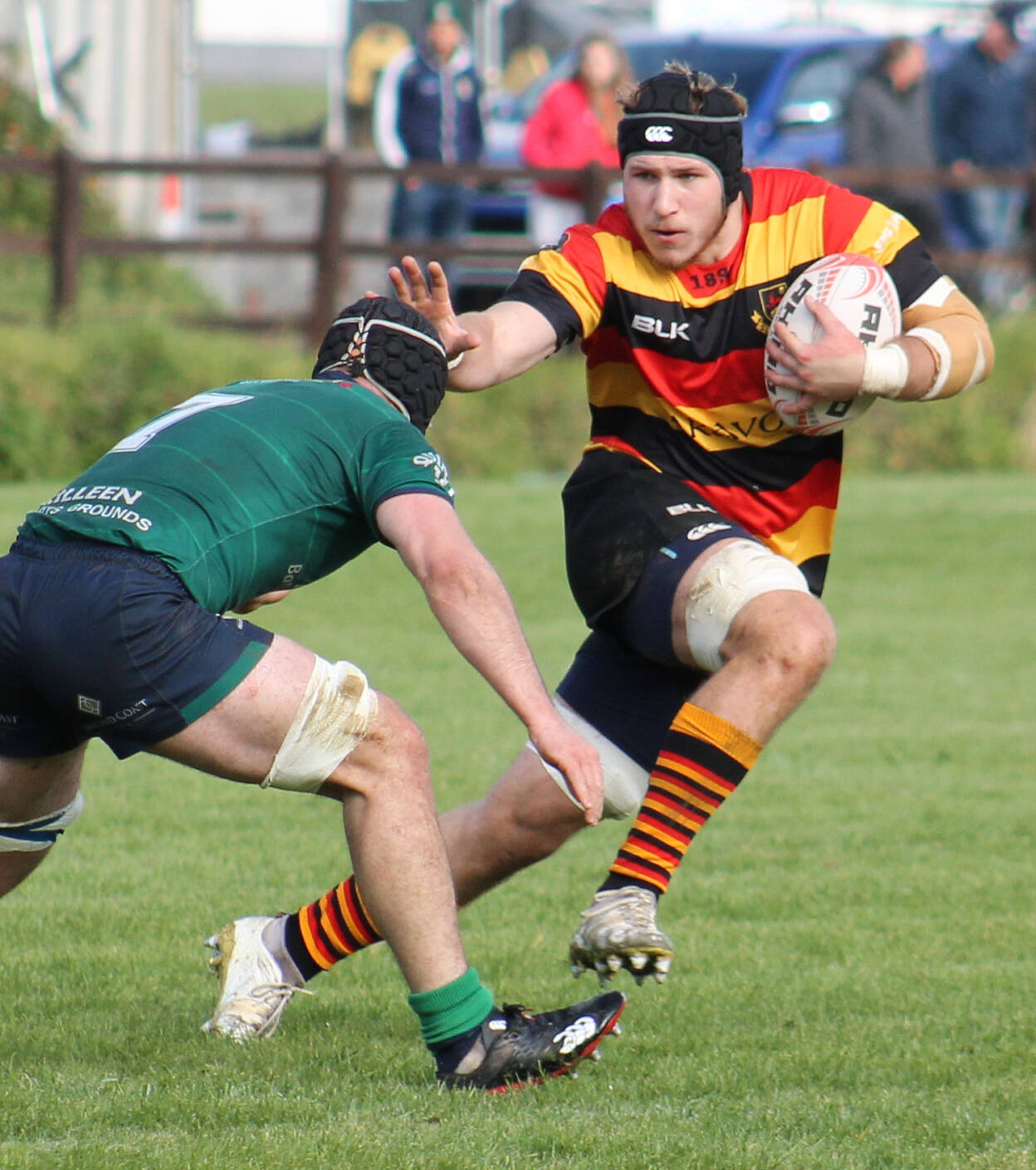 Young Munster’s dominant scrum had a big influence on their 27-15 derby win over Garryowen in Greenfields. They dismantled the visitors’ set-piece for a penalty try in each half as they kept a tight hold of top spot in Munster Conference 1.

Conor Hayes and Evan Cusack swapped penalties inside the opening 10 minutes of this behind-closed-doors battle. The Cookies pushed clear for a 13-3 interval lead, though, as Garryowen’s indiscipline was punished by yellow cards for forwards Pat O’Toole and Bailey Faloon.

A massive power-surge from the Young Munster scrum earned them their penalty try, right on the cusp of half-time. Six minutes after the restart, their Welsh number 8 Huw Worthington thundered over from the back of a maul, crashing over just to the right of the posts for Cusack to convert.

The Light Blues made a real scrap of it with a 12-point push, reducing the arrears to just 20-15. Hard-working youngsters Evan Maher and Cian Huxford both touched down to reignite the visitors’ challenge as Munsters struggled through their own sin-bin period.

Yet, Gearoid Prendergast’s charges got back on top and their strong scrum eked out a second penalty try in the 76th minute. Munsters are on their travels in the next round, visiting a Cashel side who gave Cork Constitution plenty of trouble today. 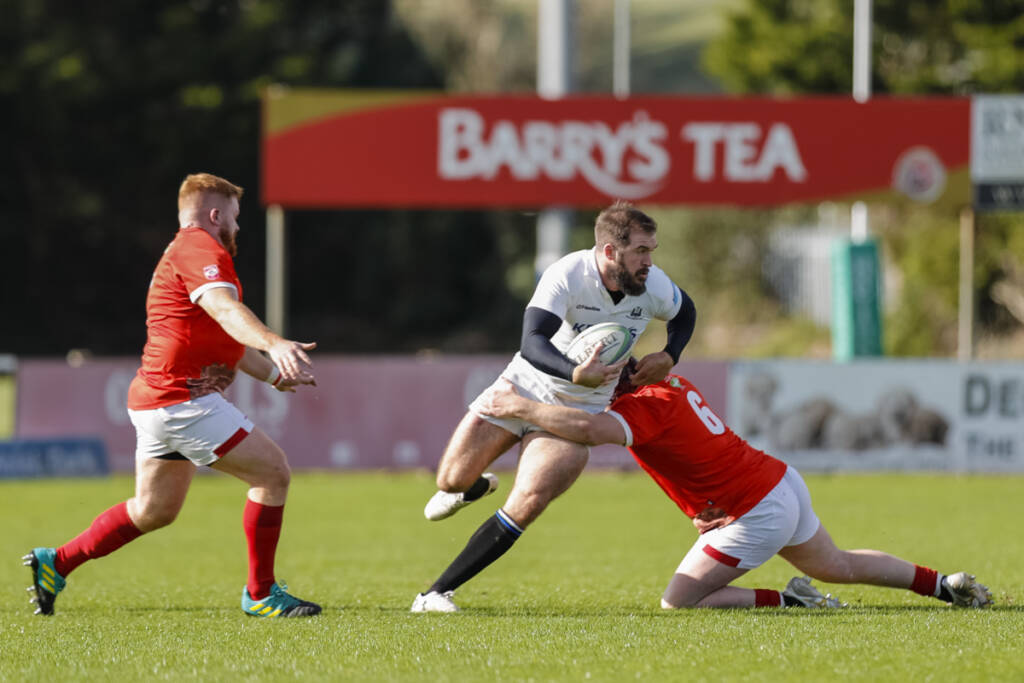 Cashel registered three tries to Cork Con’s four in a 28-17 defeat on Leeside. Former Con favourite Darragh Lyons, now Cashel’s player-coach, can be justly proud of his team’s performance against a heavyweight club operating two divisions above them.

A classy run and pass by Aidan Moynihan, who kicked all four of Cork Con’s conversions, put Ross O’Neill over for the opening try. Mikey Wilson hit back for Cashel, making it 7-5 after some penetrating play by the visitors’ pack.

Con’s persistent pressure on the back of a yellow card for Cashel scrum half Josh Pickering eventually paid off. Powerhouse second row Cathal O’Flaherty rumbled over for a late try and a 14-5 half-time lead.

It was underdogs Cashel who struck first after the break, taking advantage of some handling errors by the Division 1A side. Jack O’Rourke slipped through to score with the otherwise-impressive Lyons missing the conversion.

The Cashel play-maker was back on target in the 59th minute, converting man-of-the-match Ciaran Ryan’s try which saw him shrug off two attempted tackles. Suddenly, an upset was on the cards at 17-14.

Con quickly made amends, though, as replacement James Murphy burst clear from halfway for a fine try. John Beamish was hauled down just short of the Cashel line before O’Flaherty, showing his strength and speed again, bagged a last-minute bonus point.

It was very much a game of two halves at the Mardyke where two late converted tries earned Division 2A’s Old Crescent a 26-all draw with UCC. The Cork students looked to be cruising at half-time after tries from Killian Coghlan and Matthew Bowen (2) had them 19-0 in front.

Some nice distribution from Louis Kahn and James Taylor put centre Coghlan through a gap out wide for the opening try. Scrum half Kahn scooped a long pass out for winger Bowen to make it over in the 28th minute, with Taylor adding a terrific conversion from close to the touchline.

Bowen completed his brace five minutes before the break, raiding over from the left after good hands from Taylor and second row Richard Thompson. Old Crescent could not capitalise on a UCC yellow card before the interval, but they enjoyed a strong third quarter which produced two tries.

Six minutes in, Daniel Hurley flew down the left wing to finish off some crisp attacking play from a turnover just inside the Crescent half. Out-half Ronan McKenna expertly converted from out wide, before replacement scrum half Michael O’Hanrahan’s darting run straight from a ruck took him over on the hour mark.

UCC number 8 Ryan Murphy picked up their bonus point in the 64th minute, getting on the end of a break involving Cian Bohane, Coghlan and Harry O’Riordan. Replacement Cian Whooley’s conversion made it 26-12 but there was still time for Matt Brown’s Crescent to deservedly get something out of the game.

Replacement lock Sean Monaghan used a big hand-off and an injection of pace to thunder over for seven points the 69th minute, and even better followed five minutes later.

Flying winger Val McDermott tore through a gap on the UCC 10-metre line, evading two more defenders to reach over in the right corner. McKenna’s classy conversion and some gritty late defence ensured a share of the spoils.

In Munster Conference 2, on a day when Ben Healy shone again for Munster, two more products of the Nenagh Ormond underage system – half-backs Conor McMahon and Peter Rainsford – did all of the scoring in their hard-fought 14-8 win over UL Bohemians.

Nenagh’s fast start saw teenage scrum half Rainsford go over in the corner from a well-set lineout maul. That proved to be their only try of the afternoon, but out-half McMahon was successful with penalty efforts in the 15th, 23rd and 39th minutes. 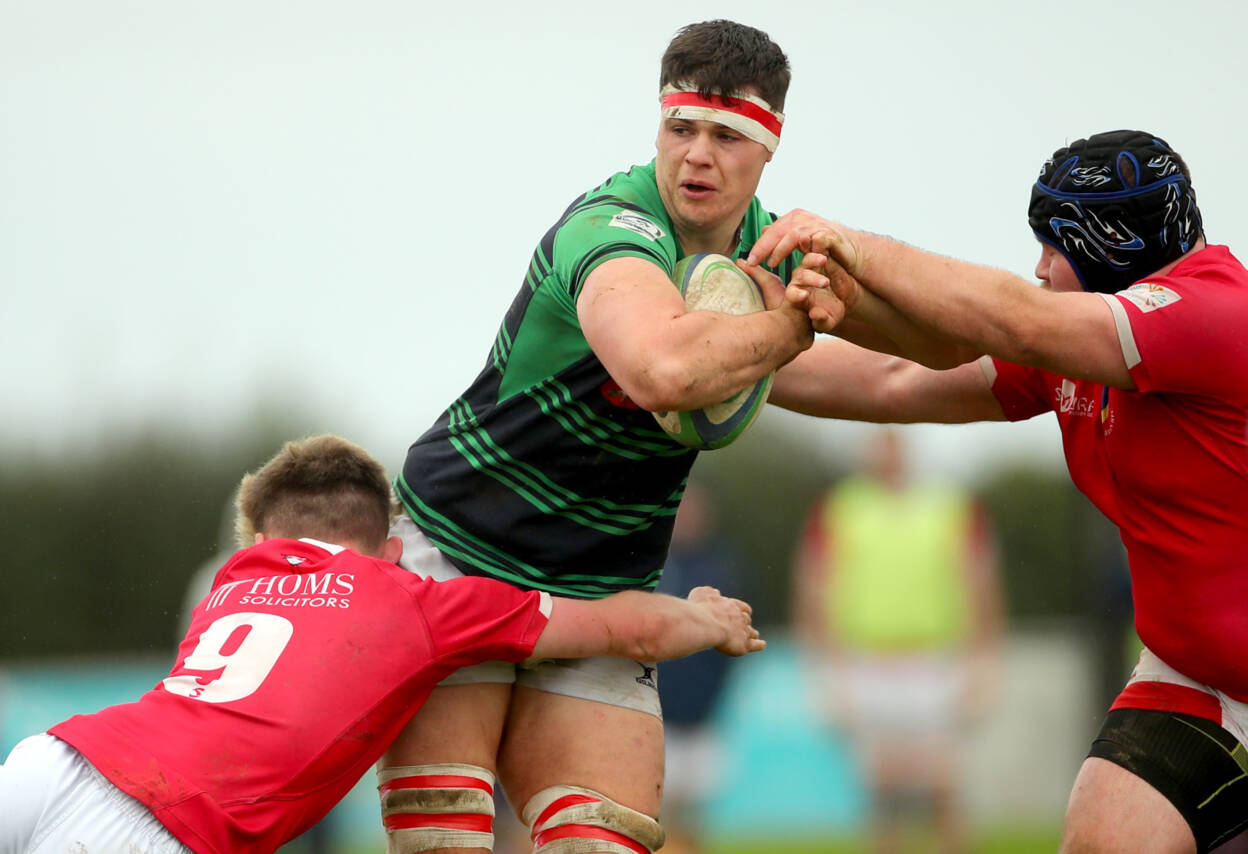 Turning around with a strong wind at their backs, UL Bohs were not helped by Jamie McNamara’s sin-binning. His back-three colleague, Darragh O’Gorman, nipped over for a try in the 73rd minute, adding to his first-half penalty, but Nenagh avoided any further concessions.

There was high drama at Kilballyowen Park where winger Kieran Bennett’s third try of the competition gave second-placed Bruff a late 20-19 win over Midleton.

The Corkmen had a maiden Community Series victory in their sights thanks to a strong three-try first half showing. They led 19-10 at the turnaround with hooker Bryan Moore notching his third try in two games.

Yet, the momentum swung back in Bruff’s favour during the final quarter as tries from Brian Bulfin and Bennett – supplementing Andrew O’Byrne’s earlier 10-point haul – saw them snatch the result.

Meanwhile, following the correct application relating to Covid-19 guidelines, three third round fixtures in Connacht and Munster were cancelled – Galwegians v Galway Corinthians, Shannon v Highfield and Sunday’s Well v Clonmel. The scores are recorded as 0-0 and both teams are awarded two points.