Doris in action against Munster at the Aviva Stadium. ©INPHO/Bryan Keane

An Inter-Provincial derby under Friday Night Lights with a place in the Guinness PRO14 final on the line does not require any further billing, but there is also the small matter of international team-mates renewing battle lines when Leinster and Munster go head-to-head at the Aviva Stadium tomorrow evening (Kick-off 7.35pm live on eir Sport).

With an extended Test window on the horizon, starting with Ireland’s two rescheduled Guinness Six Nations games against Italy and France, Ireland Head Coach Andy Farrell will have been watching this series of derby fixtures with particular interest – and the back-row battle on Friday night will no doubt catch his attention.

Having started at number eight in all of his previous 21 Leinster starts, Caelan Doris returned from Lockdown to impress at blindside flanker in the Round 14 victory over Munster two weekends ago, and a highly-anticipated semi-final clash provides the 22-year-old with another opportunity to go head-to-head with Peter O’Mahony and CJ Stander.

It says a lot about Doris’ talent and rugby intellect that he could switch from the back of the scrum to the number six jersey in such a ferocious contest and make the impact he did, and the Mayo native’s performance at blindside will not have gone unnoticed by Farrell ahead of the October/November international window.

“There’s a few nuances to it, a bigger involvement in the line-out, both in attack and defence; a little bit off restart, it’s a small bit different there but I think they’re pretty happy for me and Jack [Conan] both to play, in general, in unstructured play to play an ‘8’ role, the two of us,” Doris said this week.

“They want us to get into the thick of things rather than worry too much about holding too much width and stuff like that. So not too different.”

Asked about his international team-mates, O’Mahony and Stander, Doris said he has been able to learn a lot from the Munster pair during his time in Ireland camp: “I think they’re both very professional. You see that off the pitch, you see the attention to detail that goes into their preparation. Pete in the line-out in particular, obviously he’s prolific in the line-out and a very good defender but that comes from all the preparation, all the scouting he does. So it was interesting to get an insight into that.”

Doris’ Ireland debut was cut cruelly short just minutes into the Six Nations win over Scotland back in February but he recovered from a head knock in time to face England in Round 3 of the Championship at Twickenham. And then Lockdown arrived, with the Six Nations and rugby season suspended for the best part of six months. 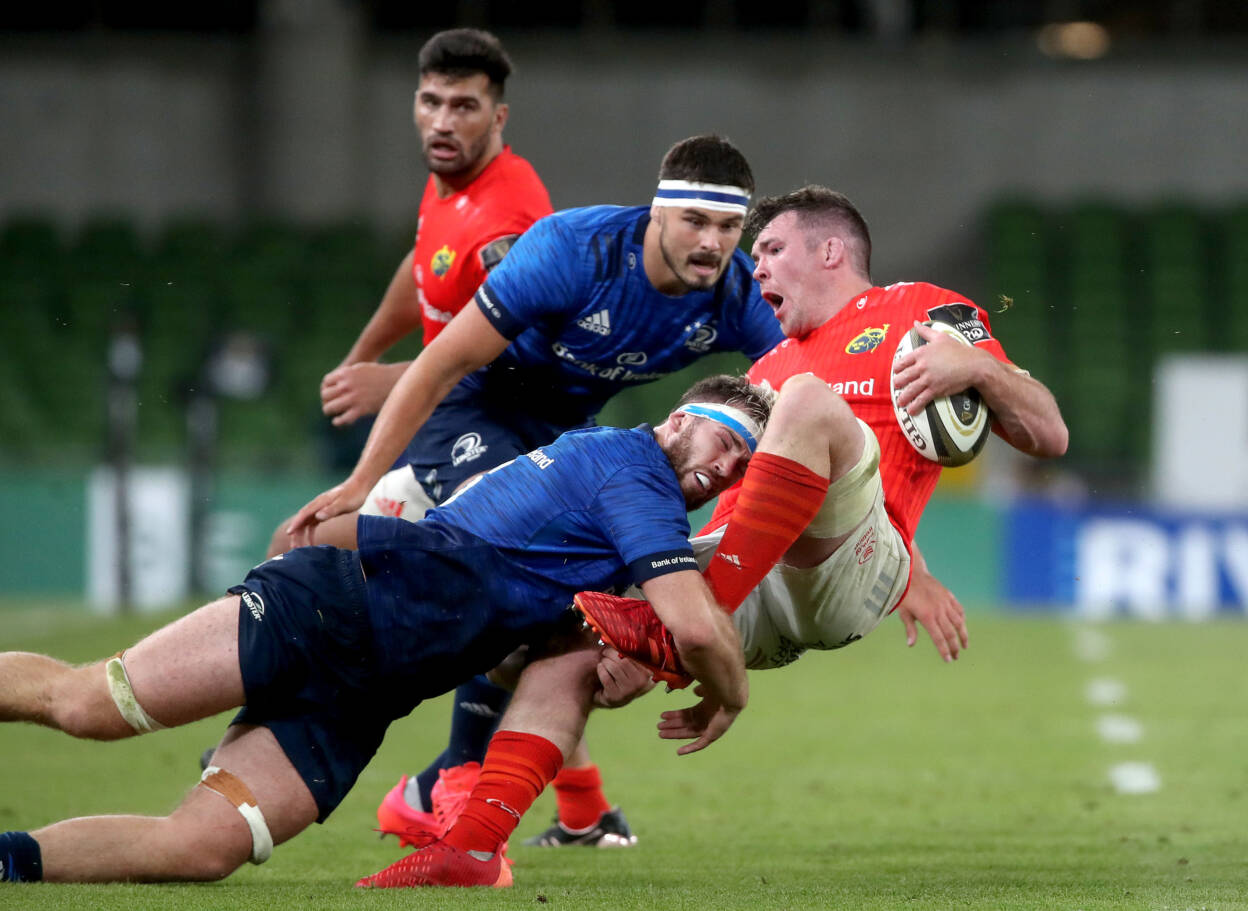 The former Blackrock College man used the time to return home to his roots in Lacken, Co Mayo, where he was able to focus on making incremental gains across various strength and fitness metrics, while maintaining his skill work by being innovative around the house and garden.

“It was definitely strange going from being completely in the mix and in the buzz of everything to no rugby at all,” Doris admits. “But at the same time I kind of switched my focus to seeing the positives, an opportunity for some physical growth, for a bit of rest.

“For skills work, I set up a few wheelie bins. I had a fair bit of space around the garden, it’s pretty rural. I did lots of catching and passing and offloading, with my parents as well. My dad still says he’s better than I am so I’ve a bit of a way to go! My mum is actually pretty good as well, to be fair to her.

“So I feel like I’m in pretty good shape now. It’s always a little bit different coming back in into matches. No matter how hard you train it’s always slightly different, the match scenario. It’s hard to replicate 80 minutes of physical contact. I was still blowing a little bit last Saturday but after a couple of games you get into it.”

Looking ahead to the semi-final showdown against Munster, Doris added that Leinster still have plenty of areas to work despite extending their unbeaten run to 23 games with back-to-back wins over the southern province and Ulster since rugby’s restart.

“Plenty. Our line-out was obviously a pretty big work-on. We spoke about that quite a bit. Our discipline – I think we gave away 17 penalties. The breakdown in particular, our two bullets being early and dealing with their threats.

“Obviously Stander was pretty prolific in that area and it’s going to be the same this weekend. Beirne as well back in the picture, he’s another big threat. So that’s going to be a key focus now. That and the line-out are two big areas of improvement.”

“Then around the park, just getting into our flow again, it had been six months. We had trained together quite a bit obviously over the last six weeks, so the cohesion is there, but it’s just slightly different when it’s in a match scenario. That will come again.”