After over a decade in international sport, initially as an Irish hockey stalwart and most recently as a key member of the Ireland Women’s Sevens programme, Audrey O’Flynn didn’t want to make a fuss. Testament, perhaps, to her selflessness but there was no grand goodbye, no fairytale finish. Just exit stage left without making any noise.

In the end, injuries caught up with O’Flynn and retirement was not exactly on her terms. But she holds no regrets, nor any grievances, rather a compilation of indelible memories from her time in the Ireland Sevens programme. From the Rugby World Cup Sevens in San Francisco, to the fourth-place finish in Sydney, the Cork native was an integral, and ever-present, member of Anthony Eddy‘s side for the last four years.

O’Flynn won 24 Ireland Sevens caps, the last of which was at the Rugby Europe Olympic Qualification Tournament in Kazan last summer, and officially left the Sevens programme before Christmas, bringing the curtain down on a period of sterling service and unrelenting commitment to the green jersey.

“I had been struggling with various different injuries and was just going from one tournament to the next trying to be as fit as I could,” she tells IrishRugby.ie. “I had shoulder surgery and was out for five months and then after Kazan last summer, my back was giving me issues so it wasn’t a hard decision to make, it was a natural end to the cycle for me.

“The coaches, Ant and Stan [McDowell], wanted me to stay and give another year but after a few months I knew I couldn’t add any value to the team and that was that. I would have liked to play on for another year but it just wasn’t meant to be and while that was disappointing, I’m proud of what I did in my career.”

And rightly so. O’Flynn’s sporting journey has taken her to every corner of the world, her achievements spanning across two different codes and seeing her accumulate nearly 150 caps between hockey and rugby Sevens. That she stepped away from international sport after 10 years at the top without any fanfare is a reflection of O’Flynn’s unassuming personality. It was, after all, always about the team.

After making 120 appearances for Ireland in hockey, O’Flynn was part of a group of supremely-talented players – including Eimear Considine and Louise Galvin – who were identified and offered the chance to transfer their skills into the seven-a-side game, with McDowell, the IRFU Sevens Development Coach and Talent Identification Coordinator, pulling off another major coup by signing her up in December 2014.

The opportunity to challenge herself in a new sport and environment, as well as the chance to chase her Olympic dream in a high-performance programme, made it an easy decision for O’Flynn to transition from hockey to rugby Sevens.

“It came at a time when I wasn’t enjoying hockey as much,” she explains. “Stan reached out and I jumped at the chance to attend a couple of training sessions out in DCU because I wanted to push myself outside my comfort zone. That being said, I didn’t think it would lead to what it did. I was just happy to go and test myself at the training sessions but a couple of months later I was offered a contract. I was so thankful for the opportunity.” 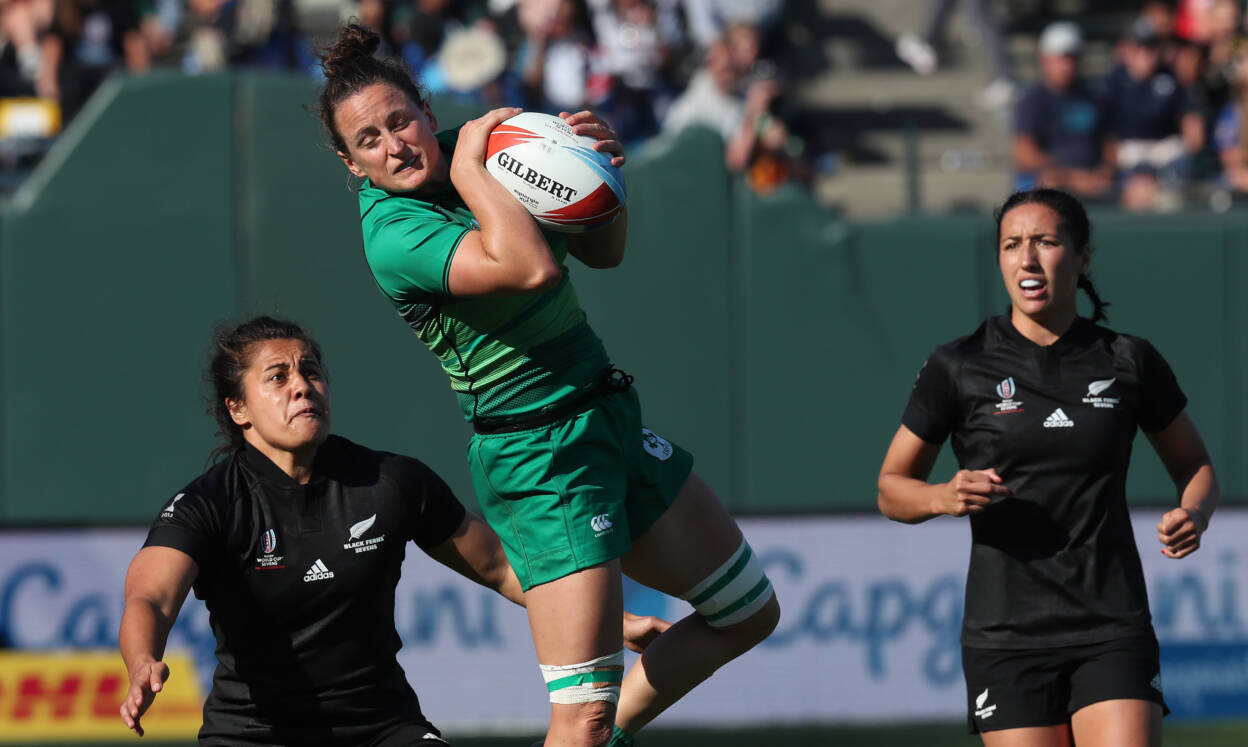 O’Flynn made an immediate impression in the programme. While the stick and ball skills of hockey are not directly transferable to Sevens, the former defender adapted seamlessly, with her speed, agility, game management and international experience all key strengths. By the summer of 2015, O’Flynn had made her Sevens debut in Brive and was part of the squad that earned World Series qualification at the Repechage tournament in UCD.

“Looking back now, it was a sink or swim situation,” O’Flynn reflects. “It was a new challenge but the experience of playing hockey for Ireland was definitely an advantage for me because I had all that behind me. It gave me confidence going into the unknown and then to get capped so quickly was a real boost. Things happened quite quickly and I loved every minute of it.

“The support we received was amazing. From strength and conditioning coaches, to nutritionists, to video analysts, everything was there for us to perform and be the very best we could be. It was amazing to have those resources there and I’ve always said if you have the talent and right attitude, the IRFU coaches and staff will help you fulfil your potential on the world stage.”

As Eddy’s side returned to the World Series, O’Flynn was an ever-present figure throughout the 2016, 2017 and 2018 campaigns, culminating in the Rugby World Cup Sevens at AT&T Park.

“Alongside our fourth place World Series finish in Sydney, the World Cup stands out as a highlight,” O’Flynn adds. “It was such a brilliant week and the opening game win over England was such a memorable game to be involved in. Overall, I have so many great memories from my time in the Sevens programme and I’ve been able to meet so many new people and make so many new friends for life.

“It’s hard to sum up how enjoyable the journey has been and I’m so thankful for the opportunities Ant and Stan gave me. Never did I think I’d win 120 hockey caps for Ireland and I definitely didn’t think I’d be able to push myself further and represent Ireland around the world in Sevens.

“It was a massive opportunity for me coming into the programme and I couldn’t recommend it enough to any young player – the resources and support you receive to be the best you can be are incredible and I’m so grateful for my time in the green jersey.”