Jack Kelly looks around the salubrious hotel lobby in downtown Los Angeles and laughs when he considers how he enjoyed an ‘armchair ride’ to the HSBC World Rugby Sevens Series.

Having come through the Leinster Academy, Kelly – a former Ireland Under-20 captain – joined the Ireland Sevens programme at the start of this season, linking up with Anthony Eddy‘s side on a full-time basis for the beginning of the team’s journey on the World Series.

After making his Sevens debut in London last May, the 22-year-old has become a key player for Ireland during their maiden World Series campaign, bringing his skillset and experience from the XVs game to feature in the first four legs in Dubai, Cape Town, Hamilton and Sydney.

In 28 World Series games, Kelly has shown his worth in the Sevens arena as a powerful and dynamic forward with an excellent work-rate and strong defensive prowess and the Dublin University FC man will be hoping to continue his form at this weekend’s LA Sevens.

“Sevens was always something I looked at as I knew guys from Leinster who had been involved in the programme before,” Kelly tells IrishRugby.ie at the end of a hard training day in the Southern California sun. “I was in the Academy at a similar time to Hugo Keenan so I was always aware of the opportunities.

“Anthony then showed a bit of interest in me coming in and the first experience in London was brilliant. I hadn’t really experienced anything like it before, even just the scale of it so that was brilliant and made me want more of it.”

During his time with Leinster, the former St Michael’s College student captained the province’s ‘A’ side to Celtic Cup success and made his senior debut for Leo Cullen‘s side off the bench in a Guinness PRO14 game against Ospreys in November 2018. 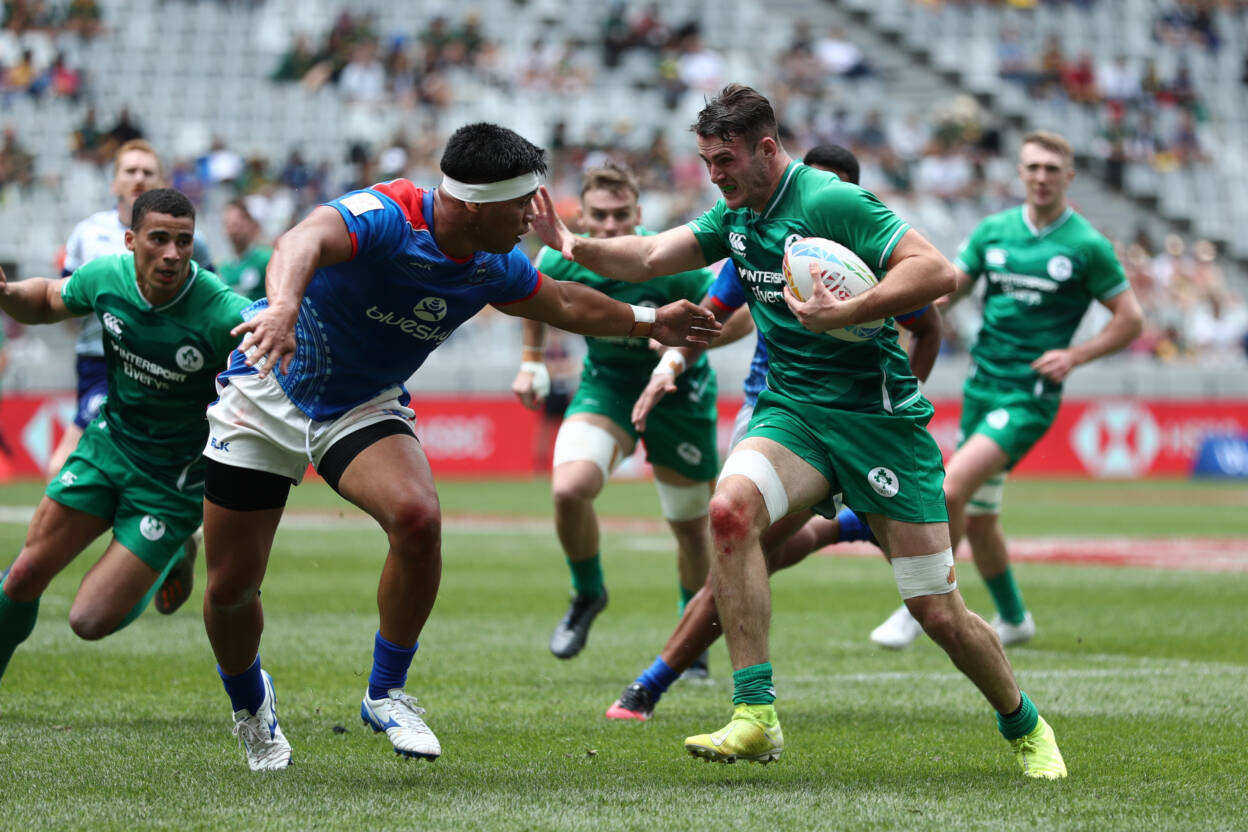 “I still obviously love playing XVs, it’s the sport I grew up playing but Sevens is refreshing in how different it is and how it challenges you in different ways. I’d still love to play XVs in the future as well but right now I’m loving being in this team.”

On getting to travel the world playing for Ireland, Kelly – who is currently in his final year of Law in Trinity – continues: “I got a bit of an armchair right just as the lads qualified for the World Series so didn’t do a lot of the hard yards but the travel has been incredible.

Going to places I’d probably never have the opportunity to go otherwise. The way the week is set up, we’re actually able to see a lot of the cities we go to as well which is great as sometimes on rugby trips you end up just being in the hotel and you might as well be anywhere in the world. It’s good that we get to go out and see the places we’ve been to.

Ireland continue their World Series campaign with the fifth leg in LA this weekend, where they open their tournament against Canada at the Dignity Health Sports Park on Saturday (11.13am local time/7.13pm Irish time), before further Pool B games against Kenya and South Africa.

Sitting ninth in the overall World Series standings, Eddy’s side are bidding to build on their seventh place finish in Sydney last time out and without thinking too far ahead, Kelly just wants to focus on each tournament and enjoy every moment of the ride.

“Really just enjoy the experience of it,” he adds. “That would be it really. I’m not exactly too sure of what I will do in the future but I know I’m loving it right now and I’m conscious that experiences like this don’t come often, or could never come again. That I could be on a team with my friends and travelling to incredible places around the world.

“I just want to keep getting on the team and trying my best to perform. I feel like we have a lot of potential that hasn’t really been seen yet on the World Series. We still have to prove that we’re not just good enough to be here but to challenge any team we come up against and hopefully we can show that in LA this weekend.”

You can follow all the build-up to the LA Sevens throughout the week on IrishRugby.ie and across IRFU social media channels, while Ireland’s Pool fixtures will be live on Sky Sports and the RTÉ Player this Saturday.