The result was never going to be the primary indicator of the worth of this pre-season workout, but in running in six tries to record a 43-27 win over Munster Development and build valuable momentum, there was a lot to like about the performance from Noel McNamara’s Ireland Under-20s.

Following on from their second camp of the season, Ireland produced an impressive display in this annual challenge match at Irish Independent Park just five weeks out from their Under-20 Six Nations opener against Scotland at the Cork venue.

Winger Andrew Smith demonstrated his exciting potential with a hat-trick of tries but it was the composure and place-kicking of Jack Crowley, the Cork Constitution out-half, that stood out most in front of a large Sunday afternoon crowd.

With his forward pack, led by captain Thomas Clarkson and the dynamic Ulster Academy hooker Thomas Stewart, providing front-foot ball, Crowley pulled the strings for McNamara’s charges while scoring 13 points off the tee.

Ireland ran in six tries in all as they stepped up their preparations for the 2020 Championship, with their campaign getting underway against Scotland on Friday, January 31. Tickets are available to buy here.

Ethan McIlroy, who recently made his Ulster senior debut in the Guinness PRO14 against Leinster, Thomas Ahern and Harry O’Riordan also dotted down for Ireland, with Eoghan Clarke (2), Ronan Quinn and Jack Delaney getting on the scoresheet for Peter Malone’s Munster outfit.

Aided by a breeze blowing down the ground, Ireland enjoyed large tracts of possession and territory in the first period and with their pack providing clean and quick ball for scrum-half Lewis Finlay, McNamara’s side dictated the contest. 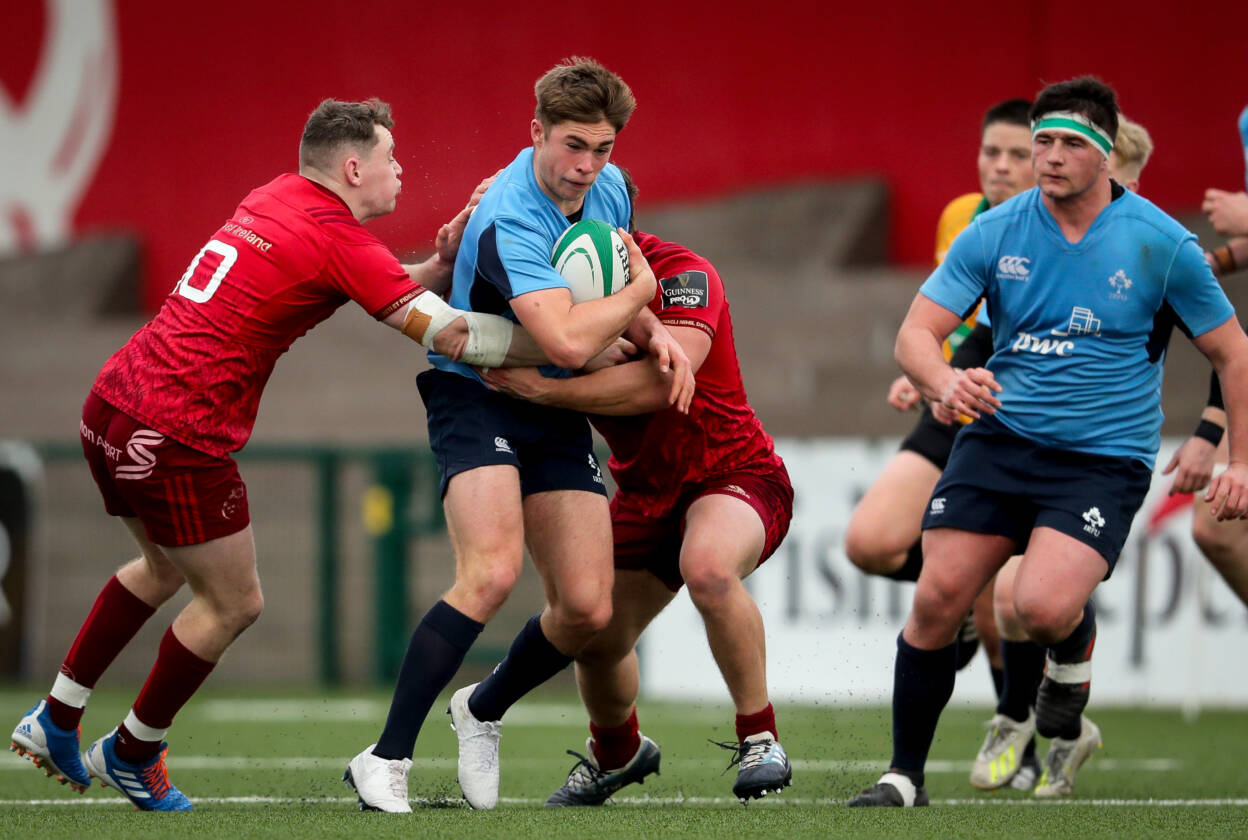 Smith capitalised on a handling error to set Ireland on their way in the fourth minute and after Crowley landed a superb long-range penalty from halfway, the lead was extended when McIlroy finished off a sweeping team move on the right.

Munster hooker Clarke kept the home side in touch with a close-range finish after a powerful rolling maul but two tries in quick succession from Ahern, against his native province, and O’Riordan ensured Ireland maintained their superiority.

The scoring continued apace either side of the interval as Quinn and then Clarke crossed to breathe life into a potential Munster fightback, but Smith’s second of the afternoon, following excellent work from fullback Oran McNulty down this near side, ended the hosts’ interest.

As McNamara used the opportunity to give his extended bench game time, there was no let-up from Ireland as Smith again showed his pace to streak clear to complete his hat-trick, with Crowley’s conversion from the touchline slipping just left.

Munster finished the game strongly and completed the scoring through centre Delaney, but it was McNamara’s side who will take the most from the hit-out as they build towards the Six Nations.