Ireland scrum half Emily Lane is pictured in action against Ilona Maher, one of the USA's try scorers during the game in Glendale ©World Rugby/Travis Prior

The Ireland Women closed out day one of the HSBC USA Women’s Sevens in Glendale with a 28-7 win over Brazil, the result eventually sending Stan McDowell’s side through to the Cup quarter-finals on scoring difference.

Anna Doyle’s late try against Brazil on her World Series debut was hugely important in the end, cutting the team’s points differential down to -38. England’s subsequent 36-0 defeat to in-form New Zealand worsened their scoring column to -45, leaving Ireland to advance as the second best third-place finishers.

It was a testing opening day, the girls in green having to show plenty of grit as little went right for them during losses to France (28-7) and the USA (45-7) which left them third in Pool B. Prolific try scorer Amee-Leigh Murphy Crowe battled on bravely with a facial injury, which required some bandaging wrapped around her head.

Along with teenager Doyle’s vital effort, another highlight at the World Series opener was the try-scoring return of Katie Fitzhenry from an ACL injury. New Zealand provide the opposition at the quarter-final stage later today at Infinity Park (kick-off 11.17am local time/6.17pm Irish time).

Ireland need to be back firing on all cylinders for that game and the play-offs, with captain Lucy Mulhall admitting: “Although it’s always great to get a win, (we’re) still disappointed in our use of possession and our discipline on the field. I still think we could have got more points on the board (against Brazil).

“The first two games we were just disappointing, we didn’t turn up. We didn’t execute the basic skills and we let ourselves down. We still have a lot that we need to improve on, but I think the fact that we held onto possession a little bit longer makes a massive difference, because all the World Series teams, if you don’t have the ball they’re going to punish you.

“We’ve just got to get up in the morning and want to execute our basic skills better and just work really hard for each other out on the field. At the end of the day, we’re wearing an Irish jersey and we want to do it proud every time we put it on. So, we’ve got a job tomorrow to put some pride back into it.” 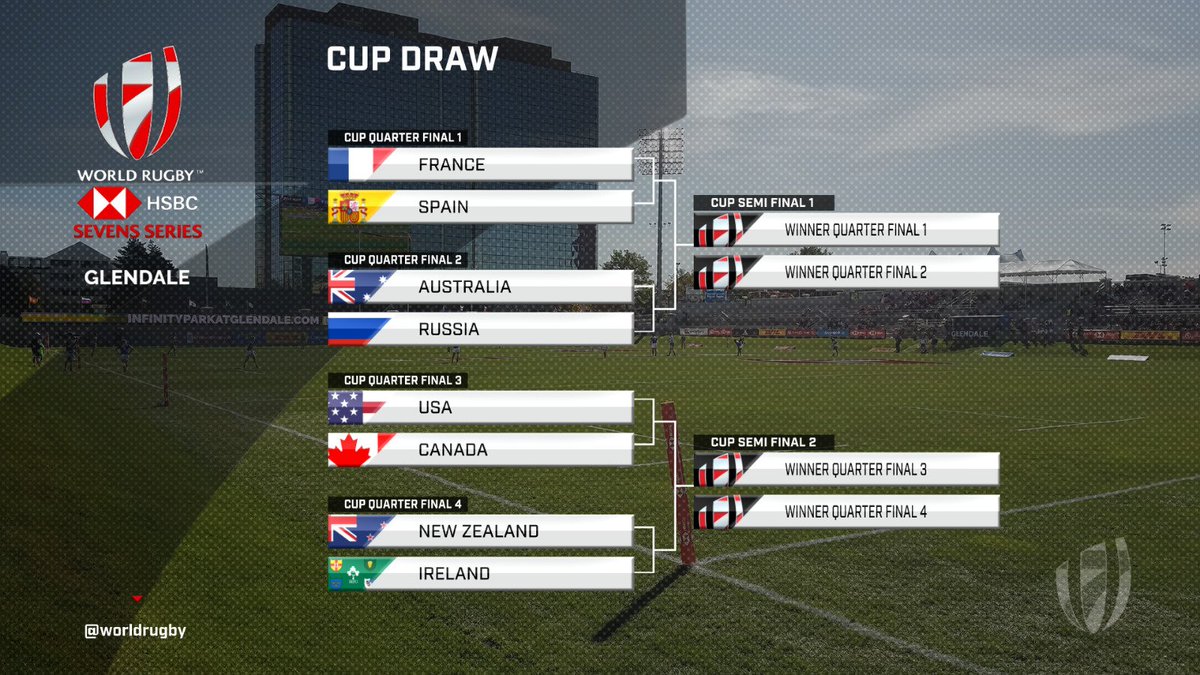 The Irish attack was much sharper when they returned for the day’s final session to face Brazil. An inviting pass from Louise Galvin put Eve Higgins through a gap and around behind the posts for a converted try inside the first 30 seconds.

Some scrappy phases suited Brazil as they gained territory, a clever decision to cut back to the short side was rewarded when captain Raquel Kochhann was freed up for the levelling try from the right. However, Mulhall’s quick footwork and a well-timed pass sent Murphy Crowe over past the half-time hooter.

Leading 14-7 at the break, Ireland increased the tempo and better continuity saw them stretch the south Americans on both wings. Replacement Emily Lane took a quick tap and picked up from a tackled Fitzhenry to dot down close to the posts for Higgins to convert.

Handling errors hampered Ireland’s progress until busy out-half Mulhall won turnover ball at a ruck and followed up with a bouncing pass to play in the 19-year-old Doyle for her maiden World Series score.

Earlier on, Caroline Drouin converted all four of France’s tries from Carla Neisen, Yolaine Yengo, Chloe Pelle and Camille Grassineau in a clinical display against Ireland. Murphy Crowe provided some inspiration with a classy 60-metre finish from a Lane pass, but missed tackles and knock-ons made for a frustrating start.

The eighth-ranked team were also made to pay for their mistakes by a powerful and athletic USA outfit, the hosts storming into a 24-0 half-time lead with Ilona Maher ominously swatting away Murphy Crowe to score the first try. Naya Tapper added a quick-fire brace, evading both Higgins and Murphy Crowe on opposite wings.

Ireland were building for a response late in the first half – until a misplaced Mulhall pass allowed the Americans to break clear and replacement Kristi Kirshe went over untouched. 24-0 became 31-0 after Cheta Emba handed off Higgins on her way to the whitewash in the ninth minute.

A turnover penalty won by replacement Deirbhile Nic a Bhaird launched Ireland forward and a terrific team score finally unlocked the US defence. Tyrrell showed nice feet to ghost through a gap and get a diving offload away to Stacey Flood. A quick recycle led to Galvin passing wide to the left for Fitzhenry to raid in behind the posts.

Mulhall had barely converted when Kasey McCravey plucked down the restart and released Nicole Heavirland for the USA’s sixth and penultimate try. Their defensive pressure, a few moments later, forced a Mulhall pass to go to ground and Kirshe swooped on it to seal a comprehensive 38-point triumph.