Despite now being firmly established on the World Series circuit, Ireland Sevens captain Lucy Mulhall admits she is constantly trying to evolve her game and become a better player.

Under the guidance of coach Stan McDowell, the Ireland Women’s Sevens squad begin their latest World Series campaign in Glendale, Colorado later today. They face France, hosts USA and newcomers Brazil in Pool B, before finals day follows in the Denver enclave on Sunday.

It is all of five years since the former Wicklow Ladies Gaelic footballer – an All-Ireland Junior winner with the Garden County in 2011 – made the transition over to Sevens rugby. She has also coached the Ireland Under-18 Women’s team for a spell, but has not forgotten her own formative steps into the sport.

“It’s amazing. I don’t think you ever lose the girl that was there on her first day with no clue what a rugby ball was. I still feel like I’m learning the sport. I think rugby’s one of those sports anyway, because it’s quite technical. You’re always learning and evolving,” admitted Mulhall, speaking ahead of the World Series opener.

“I still feel like I’m a newbie to the sport. It’s been exciting to see so many of the younger girls and, two years ago now, Eve (Higgins) tagged me in something on Instagram. I was privileged to coach the Under-18s for a season. To see in the last two years I’m playing alongside so many of them, it’s crazy.”

Having worked closely with some of the younger players advancing through the IRFU Sevens Development pathway, Mulhall is ideally placed to talk about the benefits the wider playing base at underage level is providing the senior set-up.

“Other than that they’d be coming in without experience of Sevens. 15s will give you the skill-set, but now we have girls coming through that have played Sevens. When you’re using terms like ‘pods of three’ or the different calls…management cross over, so they’ve kept the same plays, standards and culture from the U-18s on upwards.

“It’s really beneficial. Every year the U-18s come in and we’re shocked by how good they are and how much they add to our squad. They’ve definitely been the main feed for our squad over the last couple of years.”

The nucleus of the squad remains in place for the new season, with the leadership of Mulhall being backed up by stalwarts like Amee-Leigh Murphy Crowe, who was the World Series’ top try scorer in 2018/19, Louise Galvin and Hannah Tyrrell.

In addition, there are a number of new faces in the Women’s Sevens programme for the 2019/20 season, players who are itching to don the green jersey and make their mark on a World Series which now includes back-to-back tournaments for the first time – Dubai and Cape Town in December, and Hamilton and Sydney in late January-early February.

“We have quite a similar squad, but we have some of the girls who were here last year pushing on up in the squad, which is brilliant. We’ve also had the addition of some of the U-18s. Laura Sheehan has come across from 15s. We’ve Leah Mullins in, who was a Dublin Ladies footballer and she’s making the transition across.

“It’s interesting for me to see, because that’s where I was five years ago. It’s been nice to have fresh faces. For me, it was so important going into this season with the (new) back-to-backs that we have a strong squad depth. This year I feel like this is the strongest squad we’ve had.”

After previously being based at the IRFU Sevens headquarters on Lansdowne Road, the Ireland Women’s and Men’s Sevens squads switched to the IRFU’s impressive High Performance Centre at the Sport Ireland Campus in Blanchardstown at the end of June.

With three outdoor pitches, a three-quarter length indoor pitch, medical rooms and strength and conditioning facilities on site, this will help the respective squads – both marshalled by Anthony Eddy, the IRFU Director of Sevens and Women’s rugby – to prepare for all eventualities as they travel the globe on the World Series. 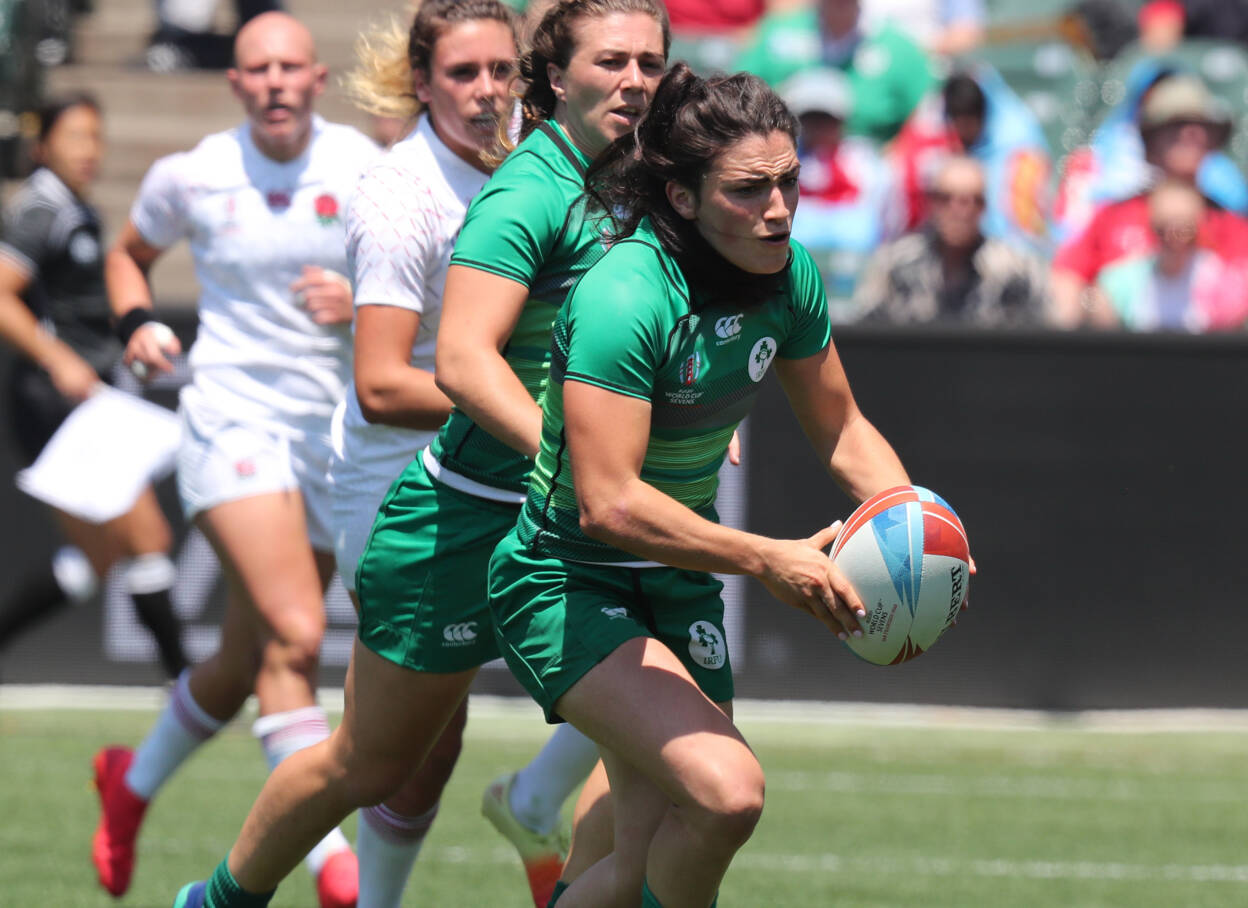 Given how hectic their training week can be, Mulhall is thrilled to have access to a state-of-the-art complex on Dublin’s westside. “If you could dream of an environment to work and train in every day, it’s pretty close to it,” she commented. “It’s perfect out there and I think coming in there with that freshness this season really helped us. It motivates you every day coming in and you have these class facilities.

“On a Monday and Friday, we’ve been starting with altitude training at 12pm. Our first pitch session will be at 3pm. We do pitch and gym and skill sessions every day. Train in the afternoons and evening on Monday and Tuesday. Thursday and Friday we start at 8am and finish around 2pm. It kinda facilitates girls to keep college going or pick up work on the side.”

Now a regular fixture on the World Series, the Ireland Women’s squad have been joined by their male counterparts for this season. Although they have competed in a number of World Series tournaments as an invitational team, the Billy Dardis-led outfit finally secured core status by winning the qualifying tournament in Hong Kong last April.

They will have to wait for a combined event at Dubai in December to make their long-awaited World Series debut, but Mulhall is convinced that the Ireland men have what it takes to deliver the goods on the global stage.

“I think they’ll be fine. It’s travelling the world with some of your best friends. That’s the best part for me. If you’re enjoying it and caring about the people you’re playing next to, you’ll get the best performances,” explained the Ireland skipper, who turned 26 last Sunday.

“What I love about the men’s team, through Hong Kong and in Rugby Europe over the years, they go out on the field every single time not really caring who they’re playing. They fully believe they can beat anyone. I’m excited to see them on the circuit this year.

“They have this complete fearlessness, where they go out and it doesn’t matter if it’s Fiji or South Africa. They just go out and they put their stamp on the pitch. They’ve blown the world away already by their performances on the World Series (as an invitational team) and in Hong Kong. The world is their oyster, really.”