The number one seeding for the IRFU Women’s Interprovincial Championship semi-finals is up for grabs when leaders Munster and Leinster meet in Cork tomorrow. Meanwhile, in Belfast, Ulster and Connacht will both be looking for a confidence-boosting finish to the round robin phase.

Ireland captain Ciara Griffin will make her first start of the season when Munster welcome arch rivals and defending champions Leinster to Irish Independent Park. Munster Rugby will live stream the senior & Under-18 Interpro double header from the Cork venue.

Griffin, who gained valuable game-time off the bench in the 27-6 win at Connacht, is hoping her province can keep up their winning form ahead of the play-offs. Laura Guest’s table-topping Munster side are level on 10 points with Leinster, but have higher points-for and tries-for tallies entering the last round.

Griffin comes in at openside with her UL Bohemians club-mate Sarah Quin and Thurles’ Grainne Fennelly completing a freshened-up back row. Indeed, two of last week’s loose forwards are now in the front row as Guest experiments with co-captain Chloe Pearse at loosehead prop and Edel Murphy at hooker.

Second row Sarah Garrett is the last of four changes up front – and there are four more in the back-line, including Railway Union’s Stephanie Carroll who gets her first start on the right wing. The absence of Enya Breen in midfield is covered by the ever-reliable Niamh Kavanagh, a try scorer against both Ulster and Connacht.

The much-changed Munster line-up, which contains eight personnel changes and three positional switches, is completed by straight swaps at half-back where Rachel Allen-Connolly and Nicole Cronin both feature. Ciara Scanlan from St. Mary’s switches to outside centre. 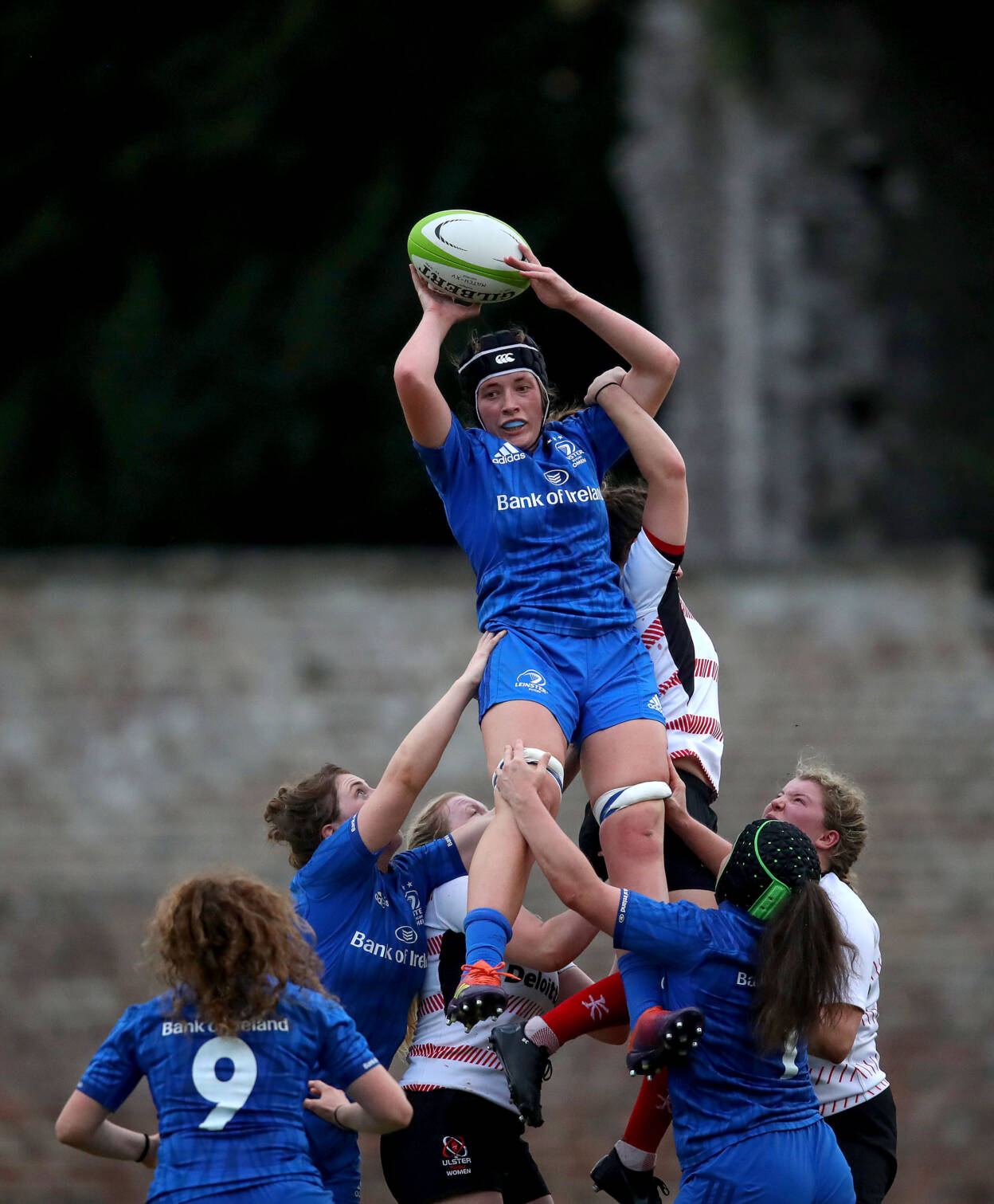 On the road for the second week running, Leinster have notably rejigged their back-line for this repeat of last year’s title decider. Captain Sene Naoupu shifts to half-back alongside Ailsa Hughes, while fellow Ireland international Michelle Claffey makes her second start following her recent return from ankle surgery.

Tullow youngster Anna Doyle, who made her debut in last week’s 24-5 victory at Ulster, shifts to full-back with Megan Williams and a re-positioned Elise O’Byrne-White completing an athletic back-three. Claffey’s centre partner is the versatile Grace Miller from Old Belvedere.

Five of Leinster’s nine changes are in the pack where Lindsay Peat, Jennie Finlay and Elaine Anthony resume in the tight five, with Juliet Short and Hannah O’Connor, the tournament’s leading scorer with 14 points, slotting back into the loose forwards trio.

The Blues’ bench has been given a big boost with the inclusion of both Jenny Murphy and Aoife McDermott. Murphy, the strong-running centre, last played for Ireland at the 2017 Women’s Rugby World Cup before taking an extended break from the game and then suffering a serious knee injury last year.

International second row McDermott is now back home after some time spent in Australia, while the injury-enforced loss of Chloe Blackmore means that Old Belvedere hooker Victoria Dabanovich-O’Mahony is set to make her senior debut for Leinster as a replacement.

The province’s head coach Ben Armstrong commented: “We know it’s a tough task to go down to their home patch and beat them. They certainly showed us the way to do it by coming up and having a draw with us last year. We’re looking forward to the challenge and it’ll be exciting to play in such a great stadium.

“We’re very happy with two wins from two especially being able to give most of the squad a run out as opposed to last year. We’ve had a couple of injuries, one in each game that has unfortunately ruled those girls out for the remainder of the series but we’ve got excellent people coming in to replace them.

“It was a tough game last week against Ulster, who are always improving. Having played both of them (Connacht and Ulster) and having two from two, we know we’re going to have to play one of them again in the semi-final. Not looking forward to that at all. We’re going to have to look at certain areas because we know they’ll have improved as well.”

Jemma Jackson and Malone duo Holly Brannigan and Emma Jordan are added to the back-line for the clash at Queen’s Upper Malone ground. Ella Durkan shifts to the right wing with young play-maker Vicky Irwin moving to midfield where she combines with her Cooke club-mate Kelly McCormill.

Katie Hetherington, last season’s Ulster Under-18 captain, makes her first start of the Interprovincial campaign at blindside flanker, and Chloe McIlwaine’s selection in the second row brings the number of starting Malone players to six.

Fiona Tuite, who is part of the Ulster bench, said: “We are gelling really well, I suppose we are a very young team. I’m 22 and I kinda feel like one of the older girls, which is a bit strange. We’ve had a lot of the Under-18s coming up and a few other uncapped players this season.

“I think here in Ulster it’s probably a development thing, we probably have a couple of years before we’re really hitting our peak, which isn’t a bad thing either. It’s about really developing as a team, and the younger girls pushing through are definitely forcing the older players to up their game as well.” 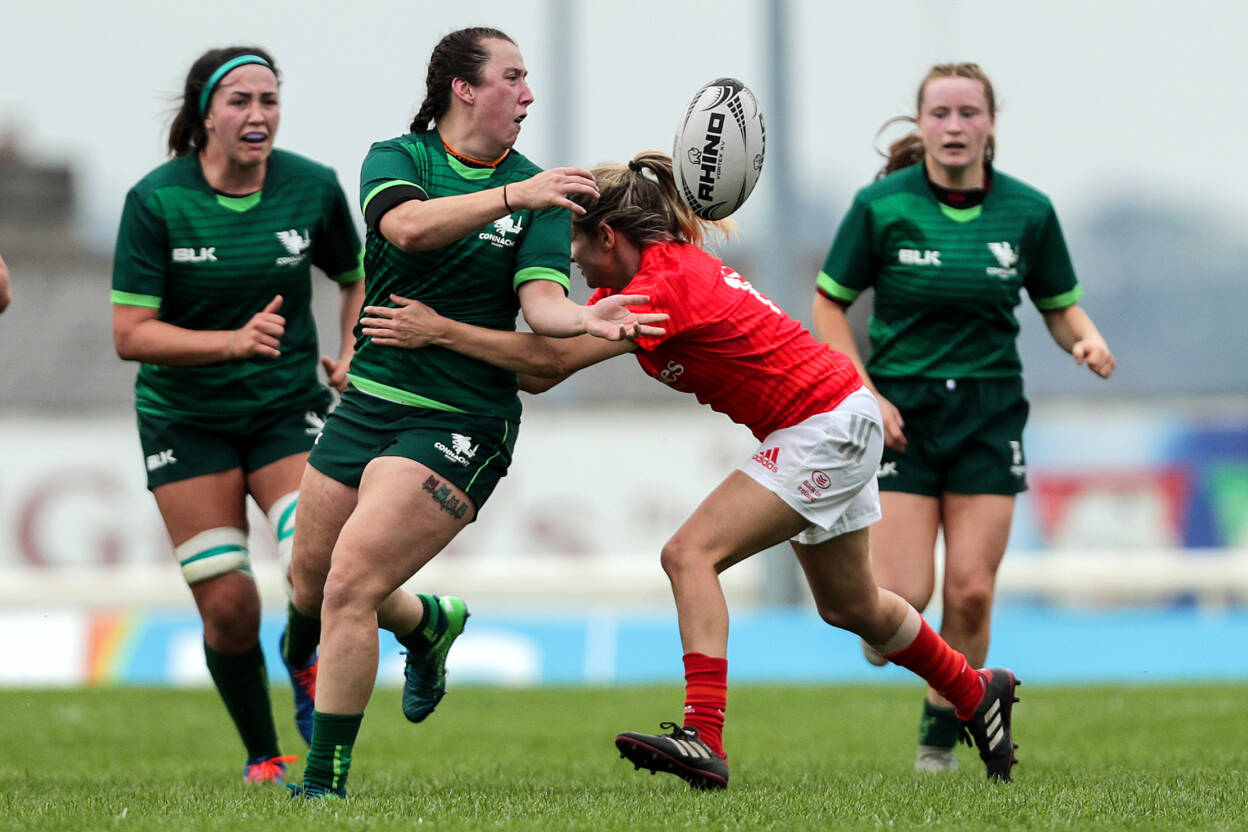 Redmond joins her ‘Wegians club-mate Tara Buggie in the engine room, with Connacht captain Nichola Fryday moving back to number 8. Some of the most-anticipated individual match-ups include Fryday against Lauren Maginnes, Laura Feely and Ilse van Staden, and the scrum half duel between Mary Healy and Kathryn Dane.