Lying bottom at present, Connacht say there is plenty of room for improvement after successive defeats. They were beaten 27-6 by Munster at the Sportsground and must now overcome hosts Ulster at Queen’s next Saturday if they are to earn a third-place ranking for the semi-finals.

Laura Guest’s Munster side were razor sharp from kick-off with scrum half Christine Coffey touching down in the third minute. Claire Keohane’s pinpoint skip pass paid off in the 25th minute when the impressive Laura Sheehan sprinted clear from her own 22 for a superb solo try.

It got better for Connacht, though. Meabh Deely, an Under-18 Interpro winner last year, is establishing herself as one of the best kickers in the competition, and and an athletic take in the air from Edel McMahon gave the young out-half the chance to land her second penalty of the afternoon.

Leading 12-6 at the break, Munster responded with ruthless efficiency as fleet-footed winger Sheehan scored again. Player-assistant coach Alison Miller tried to inspire Connacht with a powerful 15-metre surge, but the hosts were soon turned over, allowing Kate Sheehan and Laura O’Mahony to set the sidestepping Sheehan free from 60 metres out. 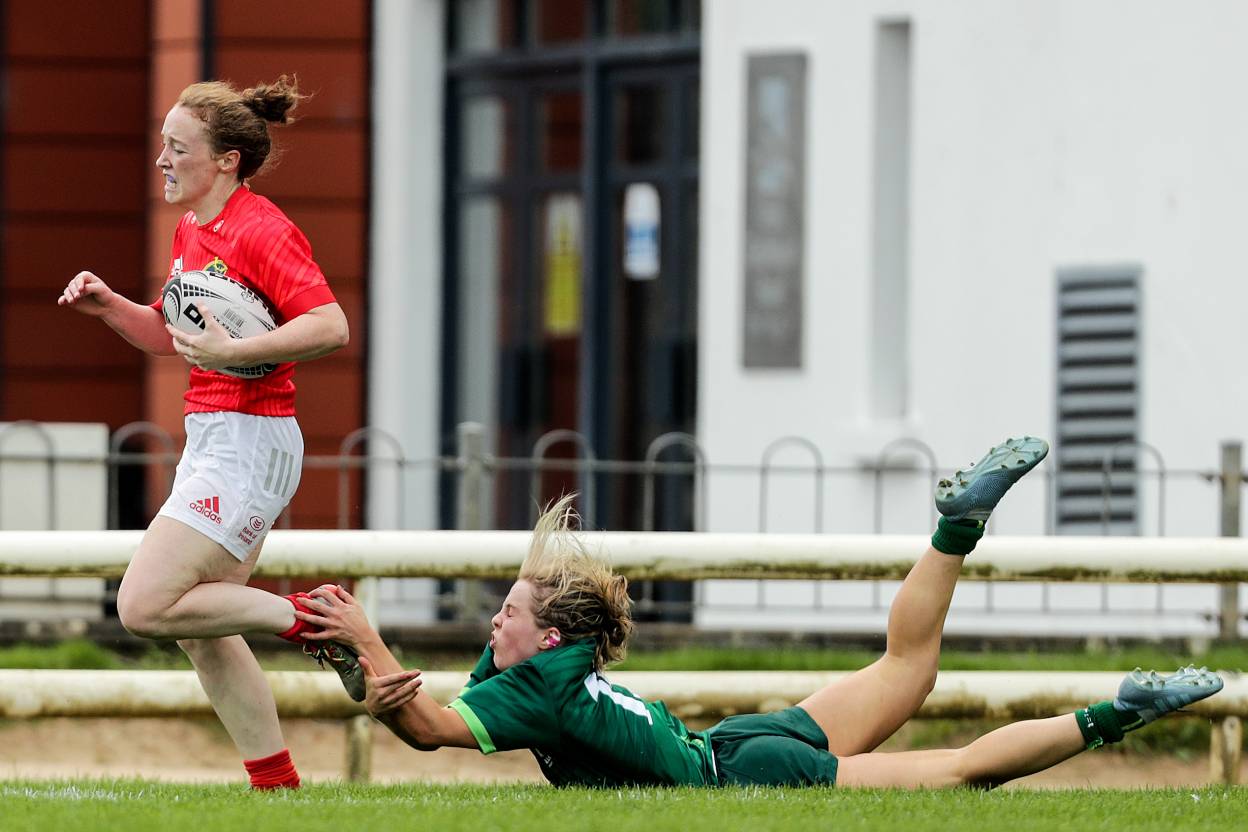 Guest emptied the bench to give Ireland captain Ciara Griffin the chance to return to action following her recent injury lay-off. She made her mark with a lovely offload out of a tackle as he linked slickly with Rachel Allen-Connolly to send fellow replacement Niamh Kavanagh raiding in beside the posts.

Railway Union winger and Ireland Sevens international Stephanie Carroll made her Munster debut off the bench, while Connacht gave a first start in the back row to Tullow native Alex O’Brien, younger sister of Ireland international and new London Irish recruit Sean O’Brien.

Edel Murphy rounded off the scoring with Munster’s 11th try in two games, muscling in under the posts past McMahon who had worked for Connacht, especially in defence. Enya Breen had gone close before that, with teenage replacement Dorothy Wall teeing up the attack from the base of a scrum.

“We’re disappointed,” said Connacht captain Nichola Fryday afterwards. “It’s our own mistakes but we have to take it on the chin now and come back next week and go for it against Ulster. We’ve nothing to lose. The two losses are harsh but we’ll build from them.

“Stephen (Kerins) and ‘Beano’ (Brian McClearn) have brought something new to the team.  We just haven’t shown what they’ve brought yet in terms of our attack. They’ve improved girls’ skills and knowledge of the game and the more we get into the campaign the more we’ll be able to show what we’re made of down here.” 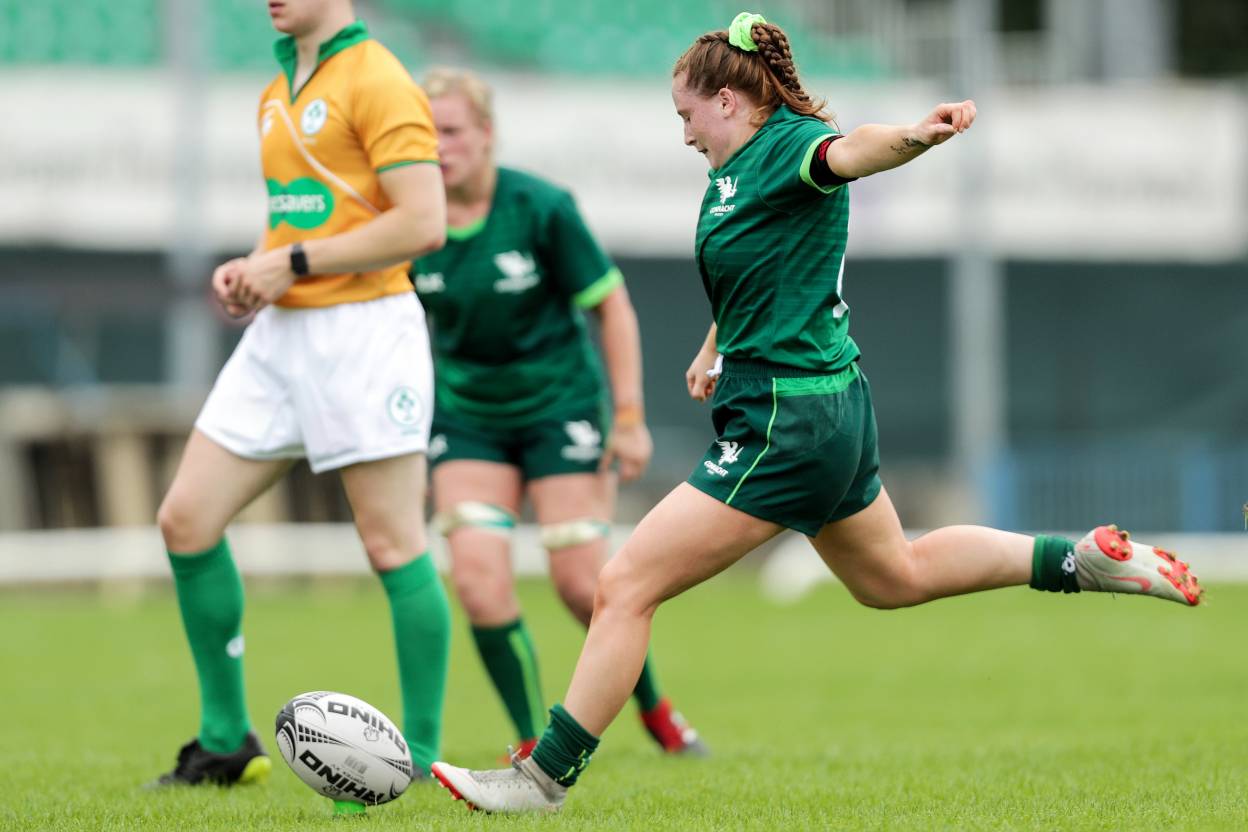 It was another positive outing for Munster and their co-captain Eimear Considine. “We set an aim before the game to not concede any tries,” admitted the Clare native and Ireland international. “We’re happy with that plus the bonus point win is always good.

“We’re looking forward to playing Leinster next Saturday (back at Irish Independent Park) and hopefully three wins out of three which will set us up with a good semi-final spot.”

Meanwhile, Ulster deserved to be closer on the scoreboard but Leinster took their chances well to triumph 24-5 at City of Armagh RFC. Sniping scrum half Molly Scuffil-McCabe marked her first start for the Blues with an early converted try, rewarding a strong start from her forwards.

The hosts cut the gap to 7-5 by the 25-minute mark as captain Beth Cregan, Ilse van Staden and Lauren Maginnes led from the front. Neve Jones and Stacey-Lea Kennedy paired up for a bulldozing carry to the line with the former getting the touchdown.

Luke was not on Ulster’s side, at times, as Vicky Irwin’s conversion came back off the post, and a block-down, a few minutes later, allowed Leinster prop Katie O’Dwyer to pounce for their second try. The game was still there for the taking at half-time – 12-5. 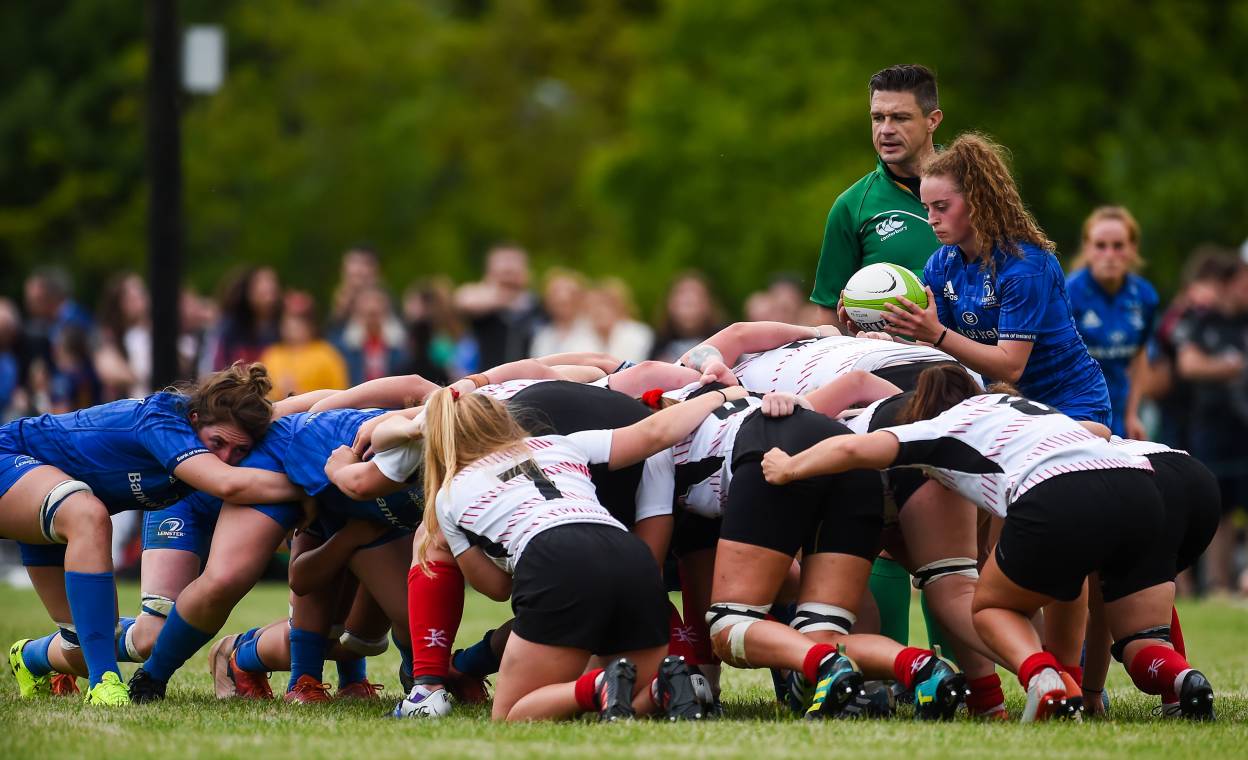 Talented out-half Irwin showed the variety in her game and carried with great intent, enjoying a ding-dong battle with her former provincial team-mate Larissa Muldoon who donned the number 10 jersey in only her second appearance for Leinster.

As improved as Ulster were from last week, it was Leinster who capitalised the most on any errors and showed their clinical edge near the whitewash. Replacement Hannah O’Connor scored from a lineout maul in the 56th minute and Muldoon’s boot widened the margin to 14 points.

A fine team try sealed the bonus point during the final quarter, with Leinster’s international-laden bench having the desired impact. Megan Williams reached over in the corner to reward some quick-witted approach play and particularly the efforts of prop Lindsay Peat.

Next Saturday’s third round will determine the semi-final pairings with Leinster away to Munster in a top of the table clash and third-placed Ulster hosting Connacht. Both semi-finals – 1 v 4 and 2 v 3 – will be staged at Templeville Road in Dublin, the home of St. Mary’s College RFC.