The Ireland Under-18 Men’s Sevens team swept final opponents Spain aside with three unanswered second half tries as they were crowned European champions in Gdansk this afternoon.

A brace from Kilkenny College’s Success Edogun, either side of a Conor McKee effort, secured a 26-12 final win and a third Rugby Europe U-18 Sevens title for Ireland in four years. Their predecessors were victorious in 2016 and 2017 before last year’s team were edged out by France in Lithuania.

Allan Temple-Jones, the IRFU Sevens Head of Athletic Performance, coached a talented young squad which was led in impressive fashion by Letterkenny’s Charlie Worth. After losing a pool decider to Georgia yesterday, Ireland bounced back to go undefeated on day two as they ended the hopes of both Germany (15-5) and France (24-14). 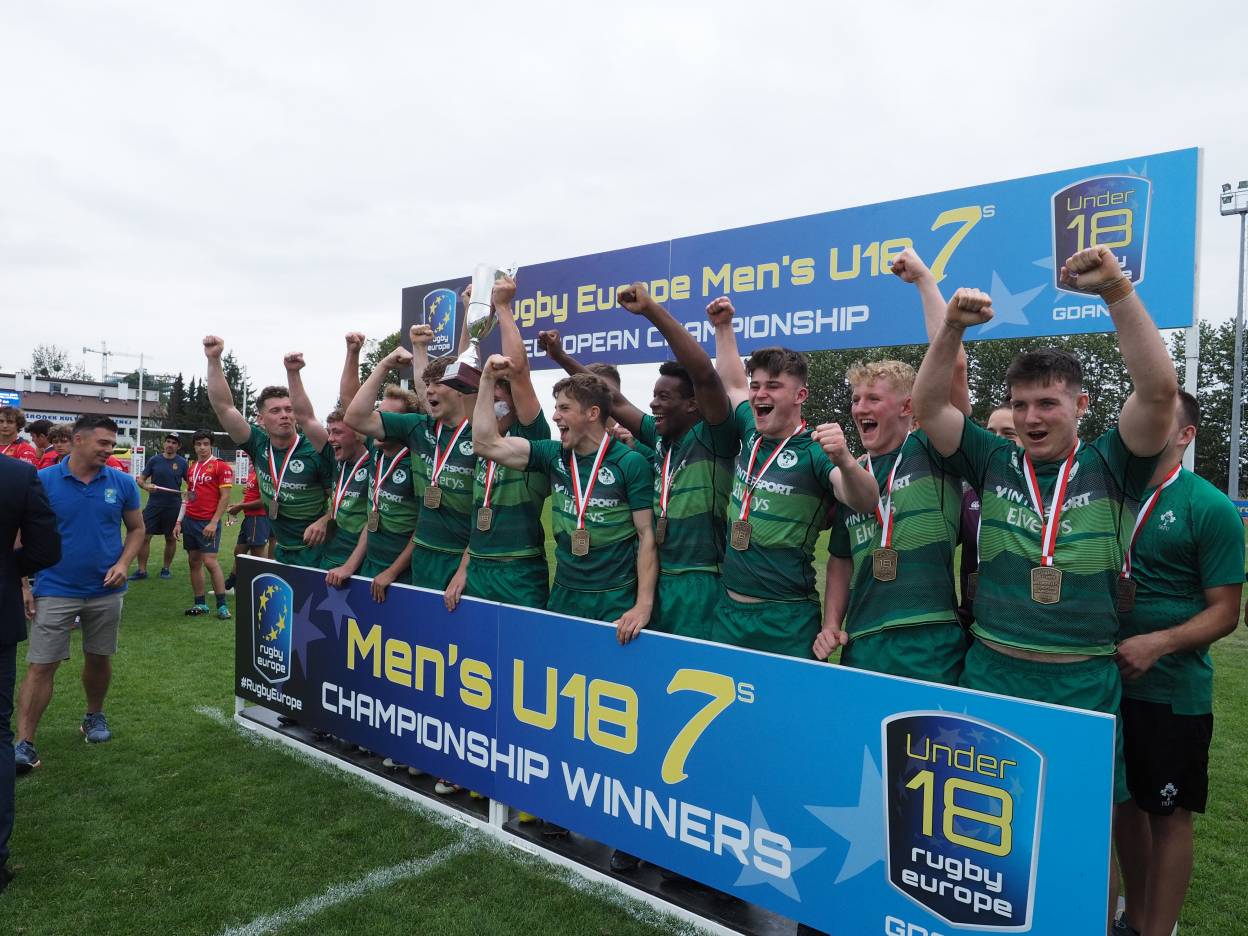 Speaking after the trophy presentation, team manager James Topping said: “It was a great experience for the players, most of whom were playing their first Sevens tournament. After two good wins yesterday, the defeat to Georgia proved a real opportunity to show resilience and learn as a group.

“Today the players lifted their levels of intensity and accuracy to keep pressure on the opposition, both in attack and defence. Hopefully this will provide a platform for some of these guys to progress further through the pathway, both with the IRFU Sevens Programme and their provinces.” 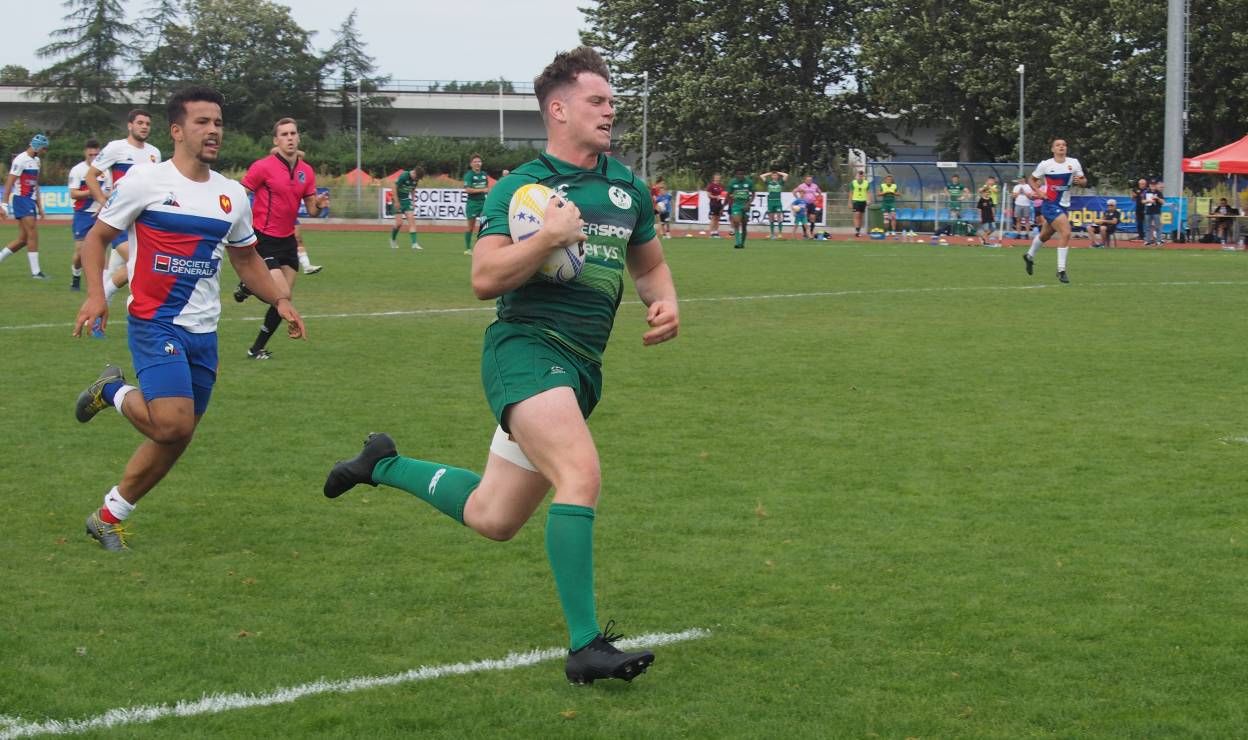 The newly-crowned European champions scored 26 tries across their six matches, with Wexford Wanderers winger Josh O’Connor (pictured above) finishing as the top scorer with seven tries. RBAI’s Jude Postlethwaite had a key contribution in the forwards and as a scorer, notching five tries, while Edogun claimed four.

The breakthrough in this morning’s quarter-final against Germany came in the fifth minute as the ever-threatening O’Connor and scrum half Michael Cooke exposed some gaps, the latter caught with a high tackle for a German sin-binning. Postlethwaite took immediate advantage as he shrugged off two defenders to crash over in the left corner. 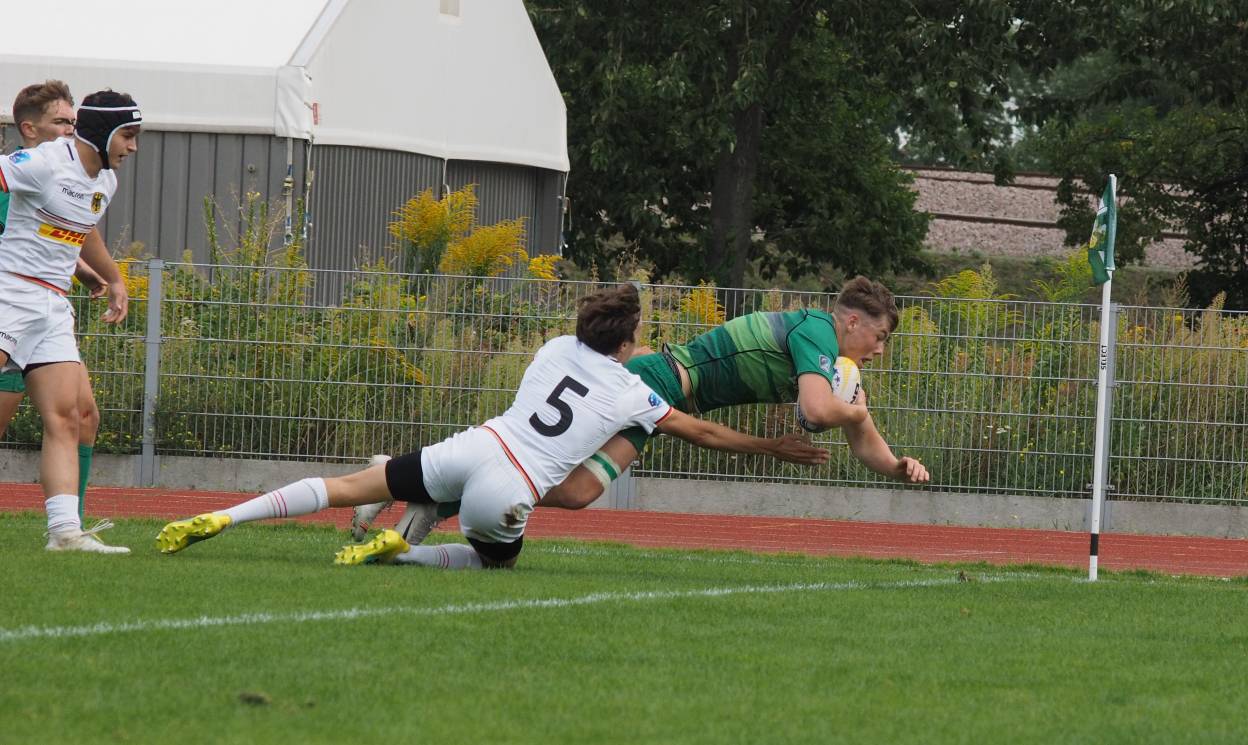 The physical German outfit hit back with a well-worked breakaway score from Oliver Stein, but Ireland crossed right on half-time to take a 10-5 lead. O’Connor backed himself from 70 metres out, using a strong hand-off to gain momentum, and his pace took him clear up the right wing.

Important tackles from James Langston, Worth and Postlethwaite prevented Germany from hitting back during a scrappy second period. A hard-fought 15-5 victory was clinched in the dying seconds when replacement Edogun sparked a break from deep, and Aaron Leahy and McKee kept the move going before O’Connor finished off out wide.

The semi-final was a repeat of last year’s decider and it was another tight affair between Ireland and France. Cooke and Edogun stretched the French defence inside the opening three minutes, and Postlethwaite then swooped on an overthrown lineout to dive over from a few metres out and reward his side’s early endeavour.

The tall Ulster Schools winger added a quick-fire second try as France failed to gather the restart and Postlethwaite got his fingertips to it before plucking it down, just outside the French 22, and using a powerful hand-off to complete his first half brace. Alfred Parisien’s late seven-pointer from inside his own half cut the gap to 10-7 at the break. 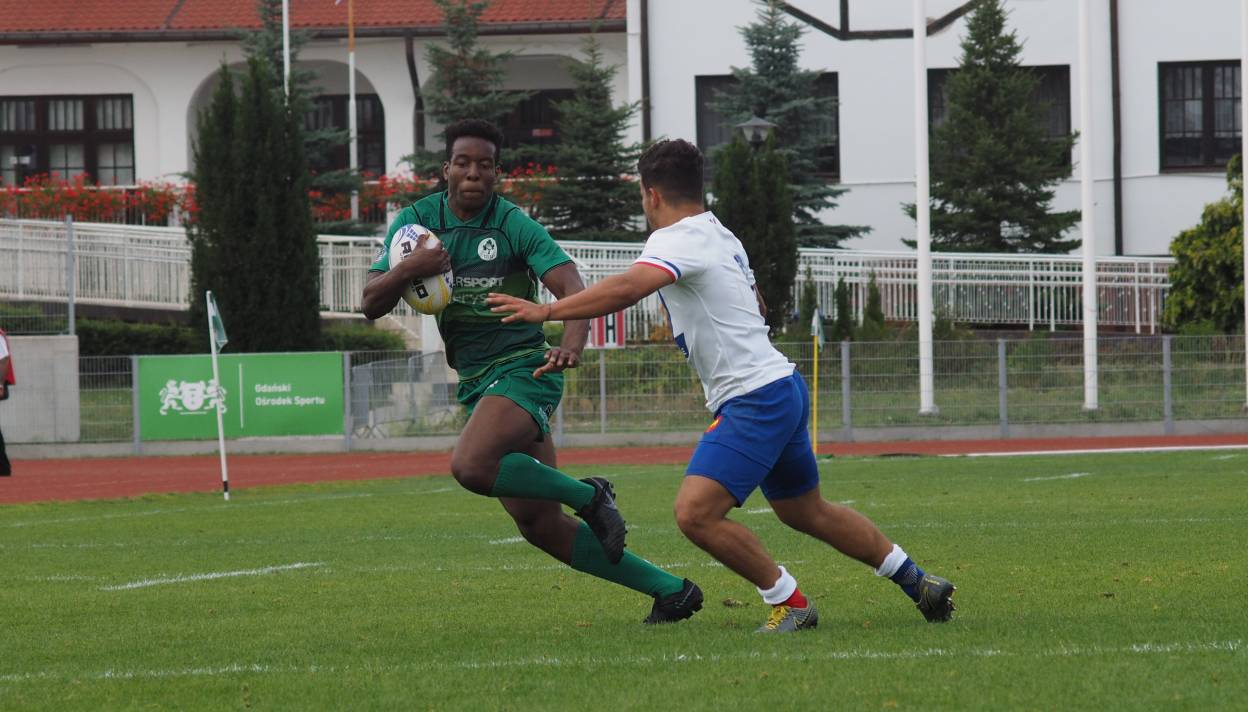 France hit the front after Parisien broke from deep and passed for Simon Desert to make it 14-10, but Ireland had more in the tank. With Thibault Debaes seeing yellow, the numerical advantage allowed Postlethwaite to set up O’Connor to raid in behind the posts. Cooke converted and then gathered his own chip kick to unleash O’Connor for the match-winning try – another powerful burst from the winger from far out. 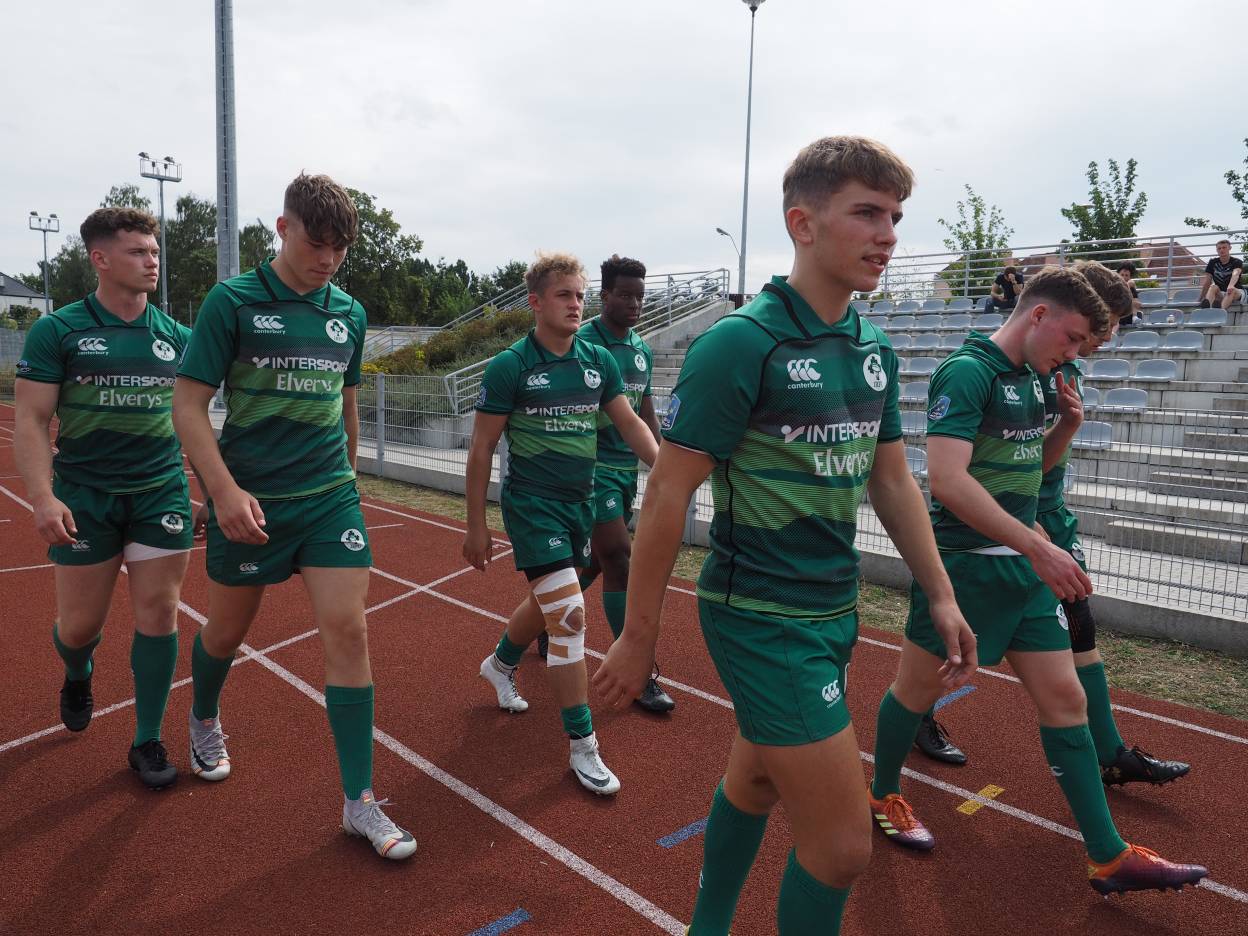 Spain book-ended the first half of the final with tries to lead 12-7 at the turnaround. Anton Legorburu collected the first from a well-weighted kick through by Xabier Martin, before Cooke’s slick sidestep at a midfield ruck – brilliantly won by fellow IQ Rugby recruit Langston – saw him ghost in under the posts to nudge Ireland ahead.

The tenacious Spanish side were thwarted by Edogun’s try-saving tackle, only for another kick to deliver the goods a couple of minutes later. Worth blocked it in front of the Irish posts and was unfortunate not to gather it fully, the loose ball instead being scooped up by the inrushing Arnau Andres who touched down and added the conversion himself.

An early O’Connor break got the Irish attack firing on the resumption, with Postlethwaite also causing problems for the Spanish defence. Jack Ward Murphy looped a pass out for Edogun to cut in from the right wing and allow Cooke an easier conversion, which gave Temple-Jones’ charges a narrow lead.

Despite missing the injured Ben Moxham for the knockout rounds, Ireland dug deep to see out the result. O’Connor covered a Spanish kick back to halfway, the possession leading to Cooke’s excellent offload off the deck which McKee expertly burst onto and carried right to the near corner for a crucial five-pointer.

Ireland kept the pressure on from the restart, the onrushing Worth swarming onto the loose ball. Postlethwaite was fed to the left and his well-directed offload out of a tackle created the opening for Edogun to step inside the covering defender and confirm the win. Cooke crisply converted for good measure, leaving the final margin at 14 points. 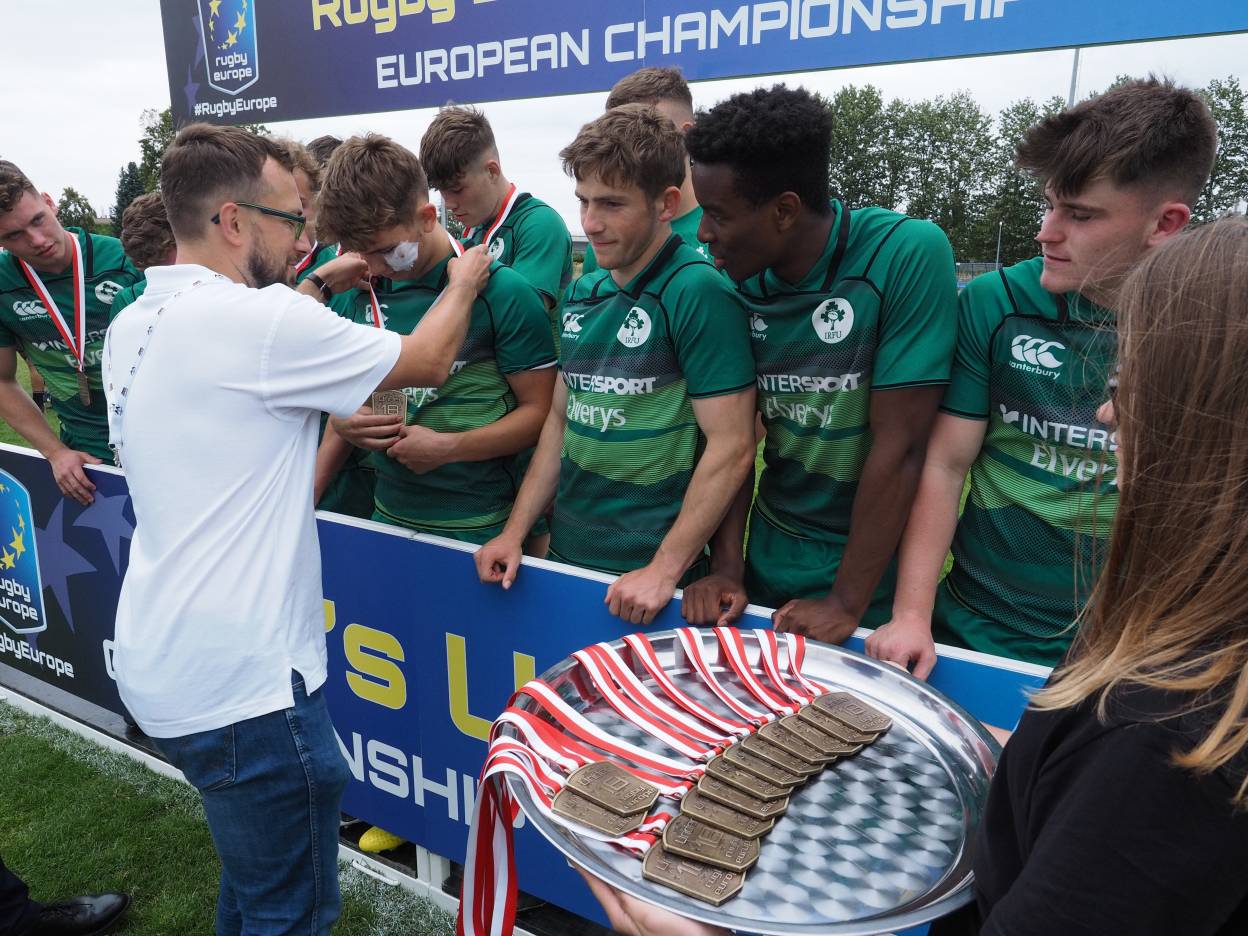 The full results and final standings are available here on the Rugby Europe website.