In 72 days South Africa will raise the curtain on the new GUINNESS PRO14 campaign when the Toyota Cheetahs host 2015 champions Glasgow Warriors in Bloemfontein on Friday, September 27.

All five unions within the PRO14 will host a game in round 1 with Ulster and the Ospreys also playing on opening night in Belfast as Benetton Rugby, the Scarlets and Edinburgh complete the slate of home fixtures with all the action screened live across DAZN, eir Sport, FreeSports UK, Premier Sports, SuperSport, S4C and TG4.

For the first time ever, fans can plan their weekends right up until round 20 with all kick-off times and dates laid out right to the penultimate weekend of the regular season.

The Cheetahs v Glasgow fixture will kick off a mammoth 152-match schedule that will culminate in the toughest run-in yet, as local and international rivals set their sights on lifting the GUINNESS PRO14 trophy won by Leinster in May.

From rounds 14 to 21 there will be only two weekend breaks in play as teams compete for precious placings in the PRO14 final series with seedings and Champions Cup qualification all up for grabs in a nine-week stretch. Details on the knockout stages will be confirmed in due course.

The tribal derby clashes that sit at the heart of the GUINNESS PRO14’s intense rivalries are spread across eight rounds. This season, the calendar has allowed for the Welsh derby games to return to their traditional Boxing Day slot with Cardiff Blues facing the Dragons in the east and the Scarlets hosting the Ospreys in the west.

The kick-off times for round 21 will be set in early 2020 with a full round of derby matches providing added intrigue to the final day of the regular season. The first five rounds of the campaign will take place during the Rugby World Cup to help avoid a clash with the Guinness Six Nations, which has led to only one weekend in a direct overlap with Test matches throughout the season ( round 12).

Due to the time difference in Japan there will be no direct clashes with kick-off times in the PRO14 so fans will able to take in all of the rugby on offer during this period. The number of traditional 3pm kick-off times in Ireland and the UK has increased by 75% from the 2018/19 season and sees 30 games scheduled for that time slot in the new campaign.

Fans in the UK can watch every game live on Premier Sports with FreeSports UK and S4C providing live and deferred free-to-air coverage throughout the season each weekend. FreeSports UK will confirm all of their selections later this summer.

In the Republic of Ireland, eir Sport will screen every game supported by TG4’s free-to-air coverage, while Super Sport continue their coverage of the Guinness PRO14 in South Africa.

After a successful first season, DAZN will also broadcast every game live in Italy as rugby continues to grow in popularity having been boosted by Benetton Rugby’s achievement of becoming the first Italian team to qualify for the PRO14 final series last season. 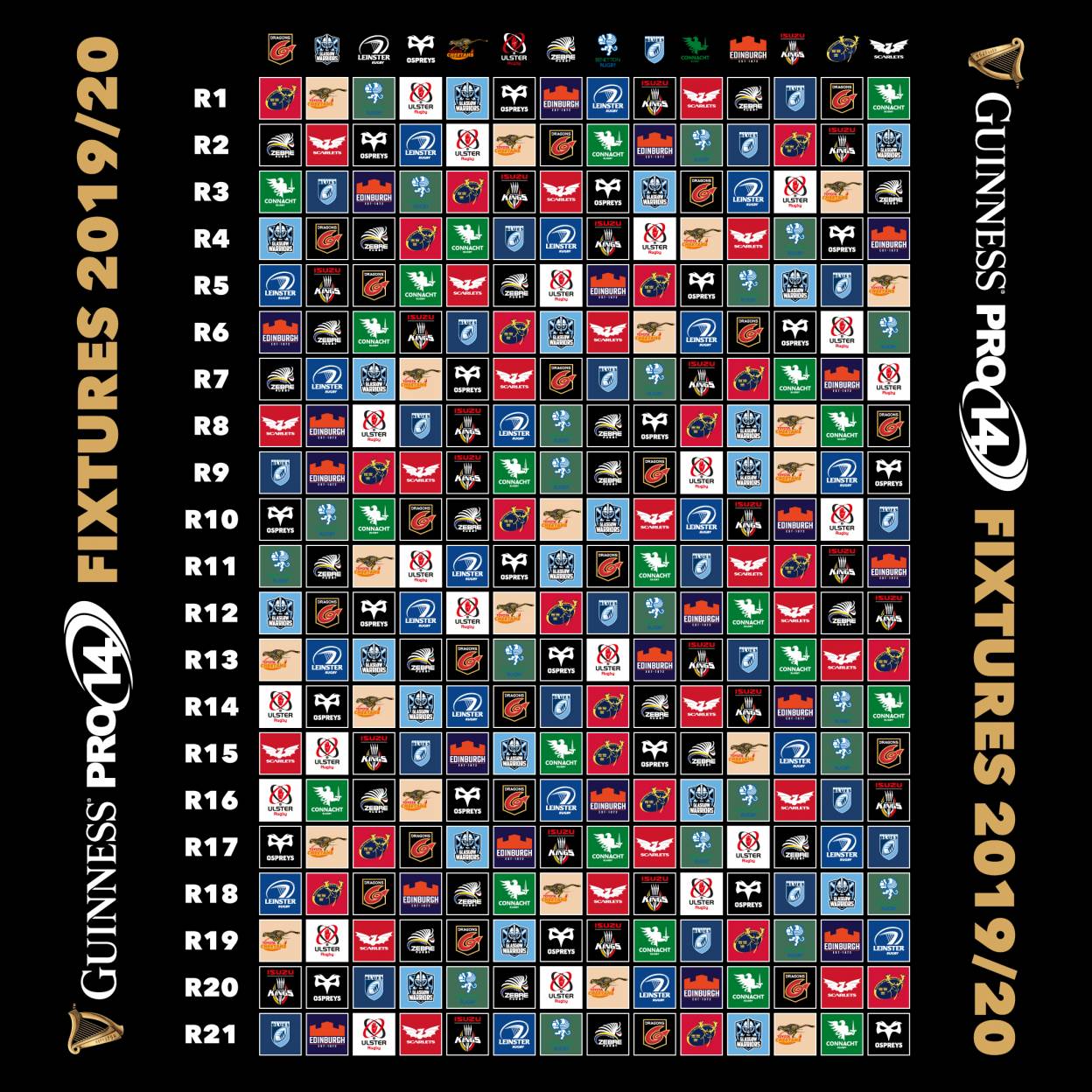 The location, date and kick-off time of the 2020 Guinness PRO14 final will also be confirmed in the near future.

With 14 teams from five countries competing in the PRO14 across two Hemispheres, the process to formulate the fixture list comes with an extensive list of criteria to fulfil in terms of player welfare, working with the requests and needs of teams in addition to the requirements of broadcasters.

Tournament Director David Jordan is pleased to see the new season kick off in South Africa for the very first time, saying:

After two years the Toyota Cheetahs and Isuzu Southern Kings have begun to establish themselves in the GUINNESS PRO14, and with each side starting with three home games there is a real opportunity for both of them to become a greater threat.

“We’re also pleased to have increased the number of 3pm kick-off times on Saturdays which works well for fans with families and for the broadcast audience. It’s also going to be one of the toughest schedules we’ve put together, and thanks to the new global season we have a run-in that barely pauses for breath over the final nine weeks of the regular season.”

Speaking about the schedule for the 2019/20 season, Jordan, who enters his 16th year with the Championship, added: “Once again we have managed to take a big step forward in our scheduling thanks to the support of all our broadcast partners. Last season we reached round 17, but this year we have gone all the way up to round 20 which is terrific news for our teams and our supporters.

“Unlike the more traditional domestic competitions, our teams journey out of their own country for the majority of their games and by setting out the fixtures so far in advance, it allows them to get more value out of their travel logistics. It all adds up to investing more resources into their 80 minutes on the pitch and that is what everyone involved wants to see each weekend.

“With the season just 72 days away, work has already begin to ramp up as we prepare for another exciting and unpredictable GUINNESS PRO14 season and I would like to wish all our teams, players and coaches good fortune in the months ahead, particularly those involved in the upcoming World Cup in Japan.”

Click here for the GUINNESS PRO14 fixtures up to round 21.

To download all fixtures directly to your calendar visit https://www.pro14rugby.org/downloadable-fixture-list/