Player recovery and planning for Saturday’s second round showdown with Australia was foremost in Noel McNamara’s mind as he reflected on the Ireland’s impressive six-try start to the World Rugby Under-20 Championship in Argentina.

Head coach McNamara watched his Ireland U-20 side come from behind three times against England in sunny Santa Fe, emerging as 42-26 bonus point winners of a pulsating Pool B opener thanks to 21 unanswered points during the final quarter.

18-year-old Ulster Academy flanker David McCann’s close-range brace in-and-around the hour mark was added to late on by influential replacement Ben Healy, who tallied up 13 points, and dynamic back rower John Hodnett. It was nip-and-tuck before that with first half tries from Jake Flannery and debutant centre Stewart Moore giving Ireland a 14-13 advantage. 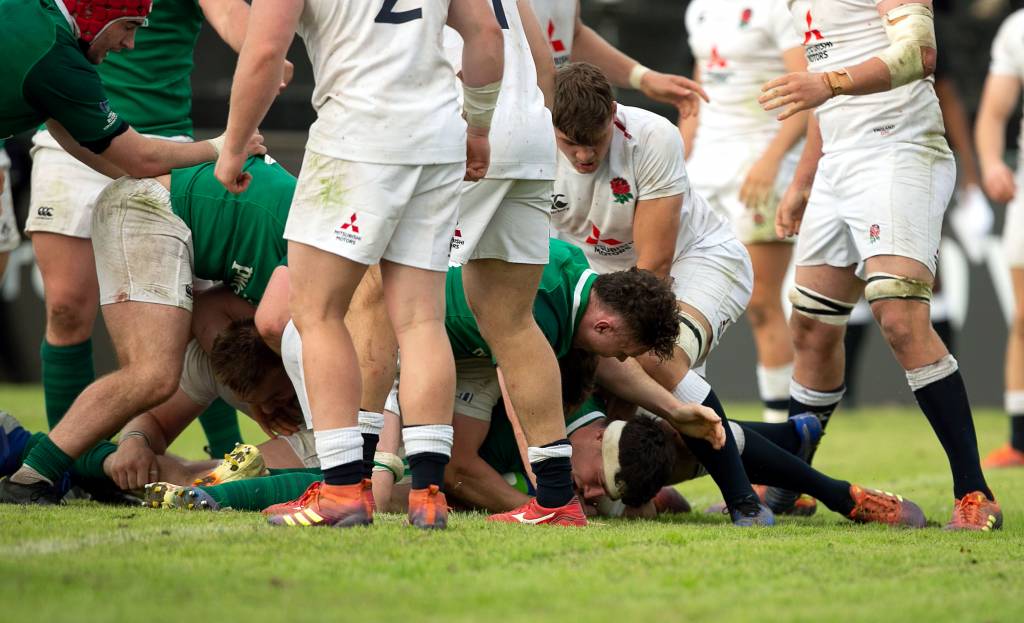 England twice regained the lead in an end-to-end second half, with wingers Ollie Sleightholme and Tom Seabrook both crossing, but their discipline let them down at crucial stages of the game – Aaron Hinkley and Manu Vunipola both saw yellow and replacement hooker Alfie Barbeary was sent-off for a reckless 67th-minute challenge on Hodnett.

Giving his post-match thoughts, McNamara commented: “I think when you look at the game itself and factor in the quality of the opposition, you obviously have to be pleased with coming out on the right side of the result. I thought the quality of effort that the boys showed and their endeavour throughout the game was absolutely fantastic.

“That goes from the guys who came in as well as the fifteen that started. Obviously we made life difficult for ourselves at times, particularly either side of half-time which usually has been a period where we’ve been quite strong. I thought the resilience to dig in and find the solutions was absolutely first class.

“Obviously there are a number of areas where we feel we can be better, and that’s not a bad place to be when you consider we scored 42 points and had a 16-point win. From that perspective (there’s) huge positives.” 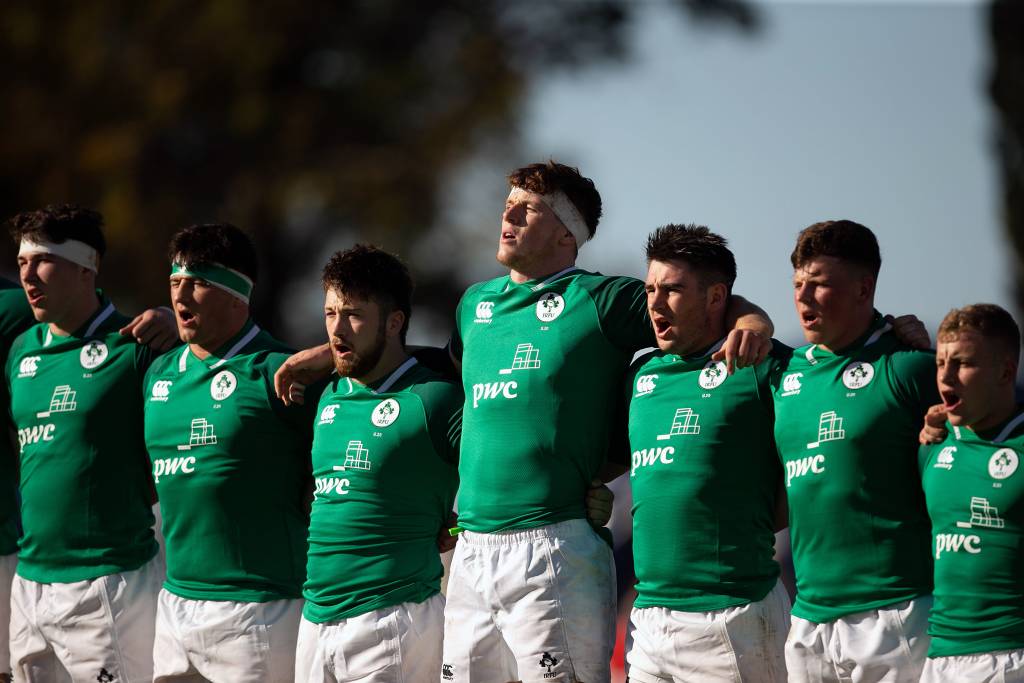 Those positives will be reflected in the Irish Rugby record books with this being the most points (42) and tries (six) Ireland have ever scored against England at Under-20 or Under-21 level. In 38 meetings, the only bigger margin of victory was 18 points when the Ireland U-21s won 23-5 at Templeville Road in March 1999.

Ireland matched Australia’s bonus point return on the opening day, with the Junior Wallabies’ superior +24 scoring difference from their 36-12 defeat of Italy putting them top of the Pool B table ahead of Saturday’s crunch clash with the Grand Slam champions at the Club de Rugby Ateneo Inmaculada venue (kick-off 10.30am local time/2.30pm Irish time).

Speaking about his young squad’s work-ons and the importance of keeping your discipline in such a tight encounter, the Clare man said: “It was obviously a strange game with the yellow cards and red card that England experienced, and obviously, tactically for them, they were trying to slow the game down and almost while away those periods. While we were obviously trying to do the opposite.

“It certainly presented us with challenges. I think at times our tactical approach could have been a little bit better in how we managed those periods when England were down a player. That’s certainly something that we’ll look to improve on over the course of the next game or two.

“Equally, I think there were a couple of times where we didn’t exert pressure in the right part of the field. We invited some pressure on ourselves and conceded a couple of tries that we wouldn’t be happy with.”

He added: “I think discipline is so important. It’s obviously one of the areas we’ve had a big focus on throughout the course of the year. We’ve had referees in to referee training and we’ve had a number of modules for the players. I think that was really relevant yesterday. Despite the fact that the game broke up a little bit, I thought the boys kept their discipline really well and obviously it proved quite costly for England.

“It’s something that’s going to be really important. We’re confident in many ways that we’ve built good habits around it, but equally it’s something that we’re conscious of and we’re going to continue working to ensure it doesn’t become an issue for us, throughout the course of the tournament.” 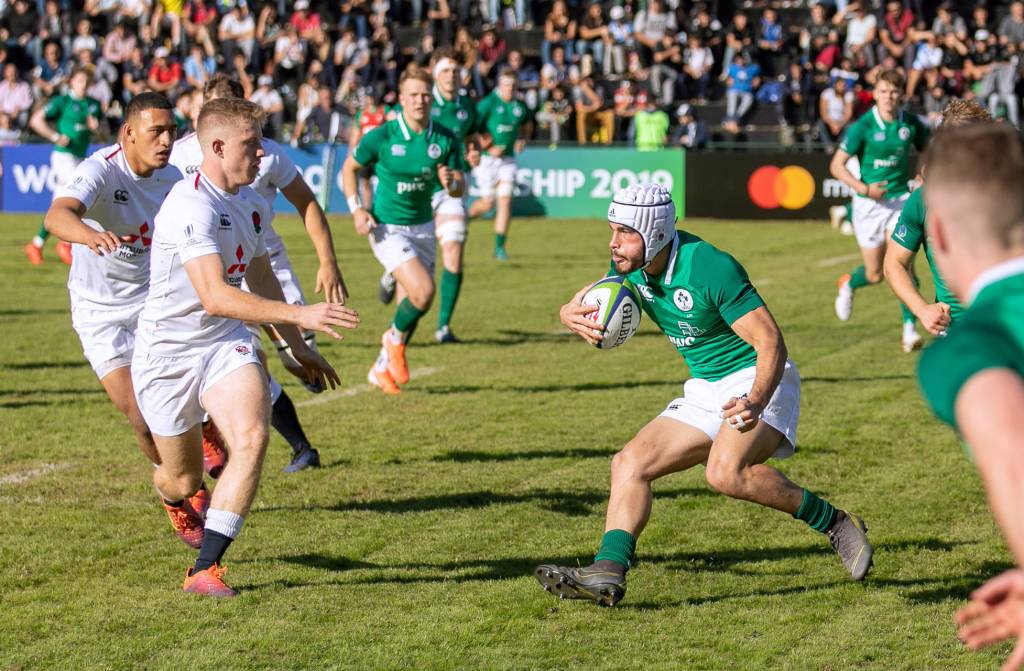 With only captain Charlie Ryan and Dylan Tierney-Martin having experience of last year’s tournament in France, a total of 21 of their team-mates made their World Rugby U-20 Championship debuts yesterday. Included amongst those were Moore, Iwan Hughes, Azur Allison, Ciaran Booth and Charlie Ward who all won their first Ireland U-20 caps.

Number 8 Allison, who was replaced in the 25th minute, is the only immediate injury concern, with McNamara explaining: “I suppose the primary focus for us over the next couple of days is really on recovery. It was physical, and whilst the pace of the game we probably would have hoped that it would have been a little bit higher, it certainly was a physical encounter.

“There’s plenty of bruised bodies. There’s a few guys who will have medicals (this morning). Azur Allison will not be available, he was removed due to a head injury and will follow the usual return-to-play protocols.”

Interestingly, Ireland and Australia have not met at U-20 level since the 2013 Junior World Championship when then-captain Luke McGrath led Ireland to a 19-15 pool win and the Australians gained revenge in the play-offs (28-17). John McKee, McCann, Booth and Ward lined out for the Ireland U-19s against the Australian Schools team in Donnybrook earlier this season.

Assessing the strengths of the Australian U-20s, McNamara admitted: “One of the things that strikes you is how good their defence is, how physical they are as a side. Very, very strong pack in particular. If you look at their last three games, I think they’ve only conceded two tries over the course of those games against Fiji, New Zealand and Italy – and the two tries they conceded against Italy came in the last ten minutes.

“I think that gives an indication of the challenge they are going to pose, particularly in terms of their defence. Their captain Fraser McReight is exceptionally strong over the ball, so there are going to be a few areas where we’re really going to have to be at the top of our game if we want to come out on the right side of the result.”