Following the disappointment of missing out on the Ireland Under-20s’ Grand Slam success in the spring, Ulster Academy centre Stewart Moore is ready to make the most of his opportunities at the World Rugby Under-20 Championship in Argentina.

Despite initially being named in Noel McNamara’s squad for the U-20 Six Nations, a concussion issue ruled Moore out of the Championship. He also had to contend with a medial collateral ligament injury in recent months, before regaining full fitness in time for Tuesday’s opening Pool B clash with England in Santa Fe (kick-off 3.30pm local time/7.30pm Irish time).

While the 19-year-old Malone clubman found it tough to watch on from the sidelines, he was thrilled to see his Ireland Under-20 colleagues delivering the kind of performances he knew they were capable of.

“I got concussed in one of the trial matches coming up to Christmas against Leinster,” he explained, speaking at last month’s Ireland U-20 squad announcement at the PwC offices in Dublin. “It was quite a bad concussion and I was out for three months so that was me off the Six Nations. I came back and played a few AIL games for Malone and got injured again and then eventually made it back now. 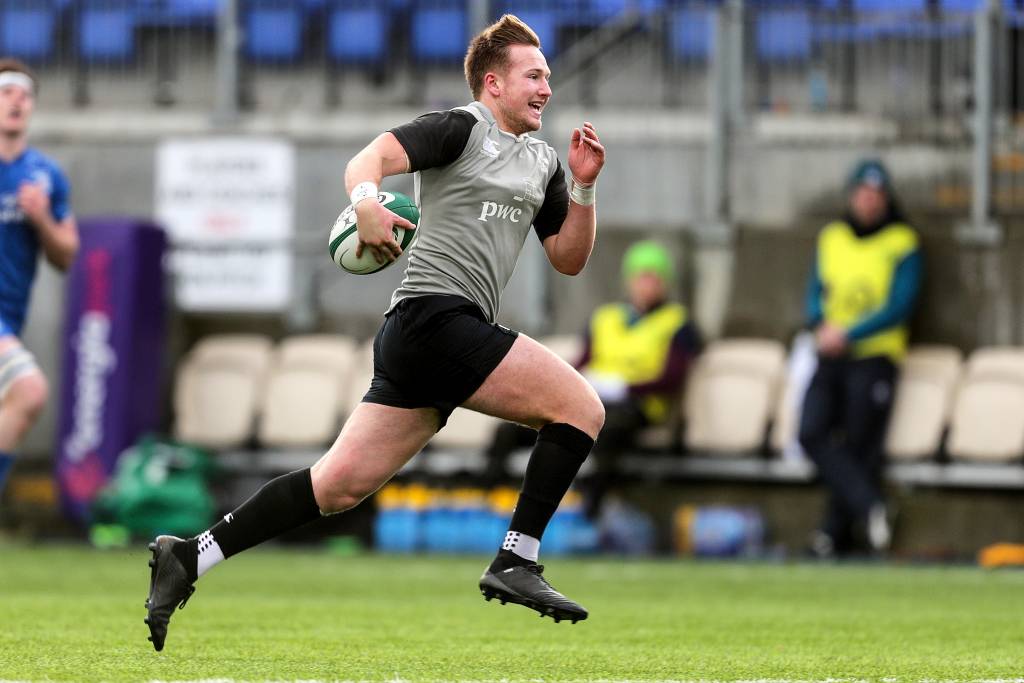 As someone who can cover both centre positions, Moore is hoping to offer Ireland a different option in Argentina. His return to the fold is ideally timed as knee surgery has ruled captain David Hawkshaw out of the tournament.

The skilful Ulster youngster is one of seven uncapped players in Ireland’s 28-strong World U-20 Championship selection – Declan Adamson, Thomas Ahern, Azur Allison, Ciaran Booth, Charlie Ward and Iwan Hughes being the others – and is fully aware of the advantages that come with being a jack of all trades.

“I think it was 14 boys went down injured last year (with the Ireland Under-20s) so it changes massively. Especially with Argentina being so far away you are going to have players with some connections to playing other positions. Noel is completely confident in his players and tries these different things.

“Sean French was playing in at 12 there and he can play wing, 13 and 15 whenever he had to, so we have got great variety in our attack and our defence as a whole.”

Since graduating from Ballymena Academy last year, Moore has enjoyed a whirlwind introduction to provincial rugby at Kingspan Stadium. Already assured of a spot in the Abbey Insurance Ulster Academy, he was immediately elevated into the senior set-up with a debut appearance in last August’s pre-season game against Gloucester.

“It is a big jump but when you are exposed so much to that, I feel going to the next pre-season that I do belong there and they are great lads. You are training beside Jacob Stockdale, who is possibly the hottest winger in world rugby, and you are passing to him and he is passing back. You do feel a sense of belonging.” 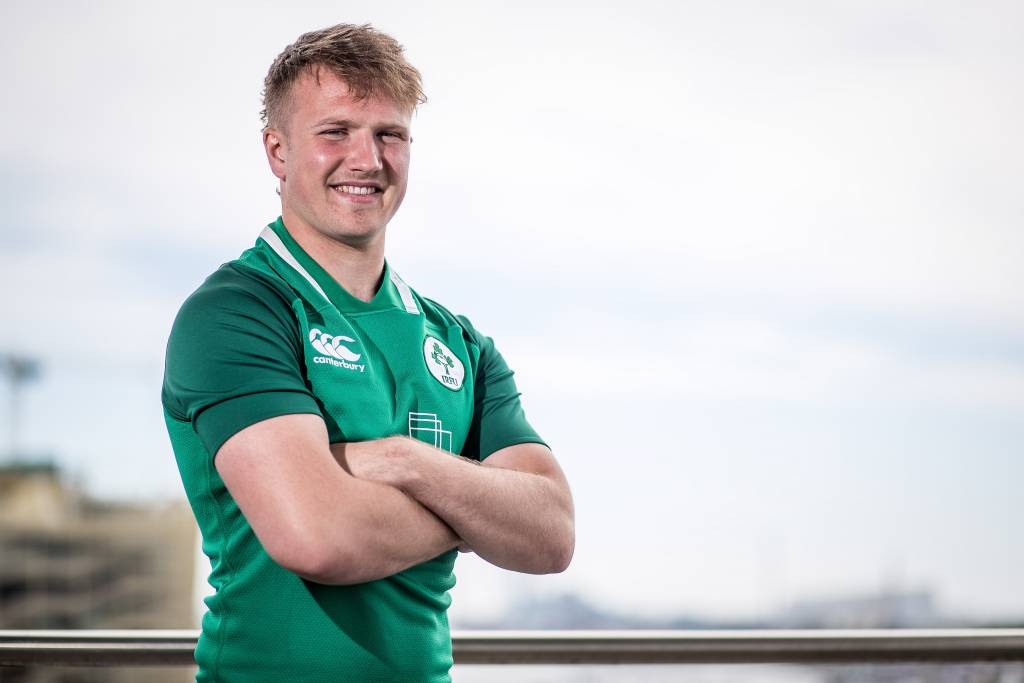 Whereas Angus Kernohan, who is also part of the travelling party in Argentina, has become a regular fixture in Dan McFarland’s Ulster senior squad, injury and circumstance has delayed Moore’s competitive bow for the time being. Nevertheless, he has reaped the benefits of his early exposure to the professional game.

“I did the whole pre-season, which was unexpected, and I enjoyed it. I felt like I had a really good pre-season behind me and I started the pre-season games against Gloucester and Wasps. Got injured again so it has probably been the hardest year of rugby in terms of loads and stuff.

“It is nice that I’ve been brought back into the seniors and into the mix as soon as I’ve come back from injury. It’s been good getting that exposure to players like Stu McCloskey, Luke Marshall. I’ve been training in ‘the injured club’ with Luke for a good bit so it’s good to see him back. It just shows how quickly you can go from that to playing in the Champions Cup.”

It was during last December’s warm-up match against a Leinster Development XV at Energia Park that Moore suffered the concussion that ultimately ended his U-20 Six Nations aspirations. On the day he had started at inside centre alongside French, and while he was able to train away with Ulster during his three-month absence, he was held back from full contact training. 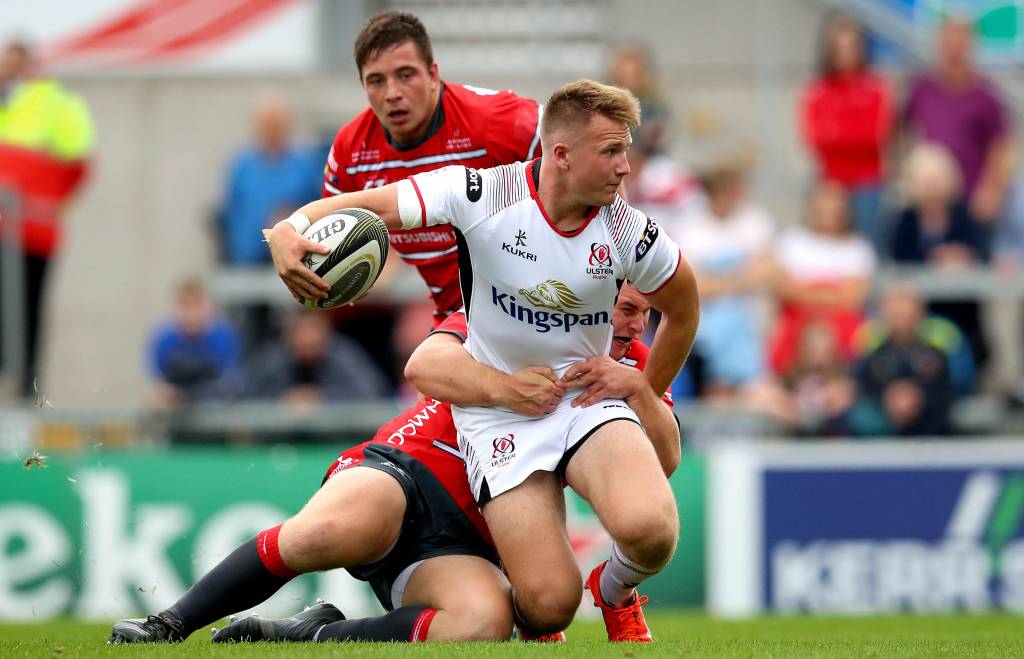 “You are training away and are good fitness-wise and I felt really good coming back into the rugby,” he recalled. “A bit nervous obviously because it was my head and contact and stuff, but (coach) Dan Soper is there and he is taking injured skills and he is top class. There are boys still keeping their skills up as well as their gym and fitness.

“I came down to Dublin a few times for the neurologist and he just said there is nothing wrong but it was a bad concussion. He just said to take the time off. The next day I felt grand but I just listened to what needs to be done. Players goes through it, they have their highs and lows so it was mainly low the whole season. Hopefully it can end on an up.”

When he returned to the Ireland Under-20 set-up ahead of the World U-20 Championship, it was Leinster who once again provided the opposition in a warm-up fixture. He admitted to a degree of rustiness following his injury-disrupted season, but he has quickly gotten up to speed and all eyes are on the pool opener against England.

Speaking in mid-May about how he fared against the Leinster side, he added: “Quite rusty in defence and it wouldn’t even be in my head now. Just getting used to match fitness. I’m not where I want to be just yet but I have a few weeks to get on top of that. Just looking at how the 20s want to play and clarity and things like that, I felt it went okay.”