The team behind Guinness is flying its colours for the 2019 Union Cup today, as it unveiled Guinness Union Cup gates to support its partnership with Europe’s biggest LGBT+ inclusive rugby tournament which takes place in Dublin next week for the first time.

The world-famous Guinness Gates at Rainsford Street have been completely transformed for the first time in their history to promote the Union Cup, which takes place from June 8-9 at DCU campus.

The Guinness gates are passed by two million tourist each year, so the Guinness brand wants to use their popularity to help showcase the Union Cup and encourage people to attend the matches.

The Guinness brand has a proud heritage in rugby across a range of provincial, national and tournament sponsorships, some of which span decades. Rugby has an extraordinary capacity to unite and Union Cup celebrates the unique camaraderie and friendship at the heart of the sport, making it a great partner for the Guinness brand.

Emerald Warriors RFC is inviting Ireland to stand in support of diversity and inclusion in rugby, #TryWithPride and come along to Union Cup matches over the weekend. This year for the first time there is also a dedicated Women’s tournament and cup, the Ann Louise Gilligan Cup. 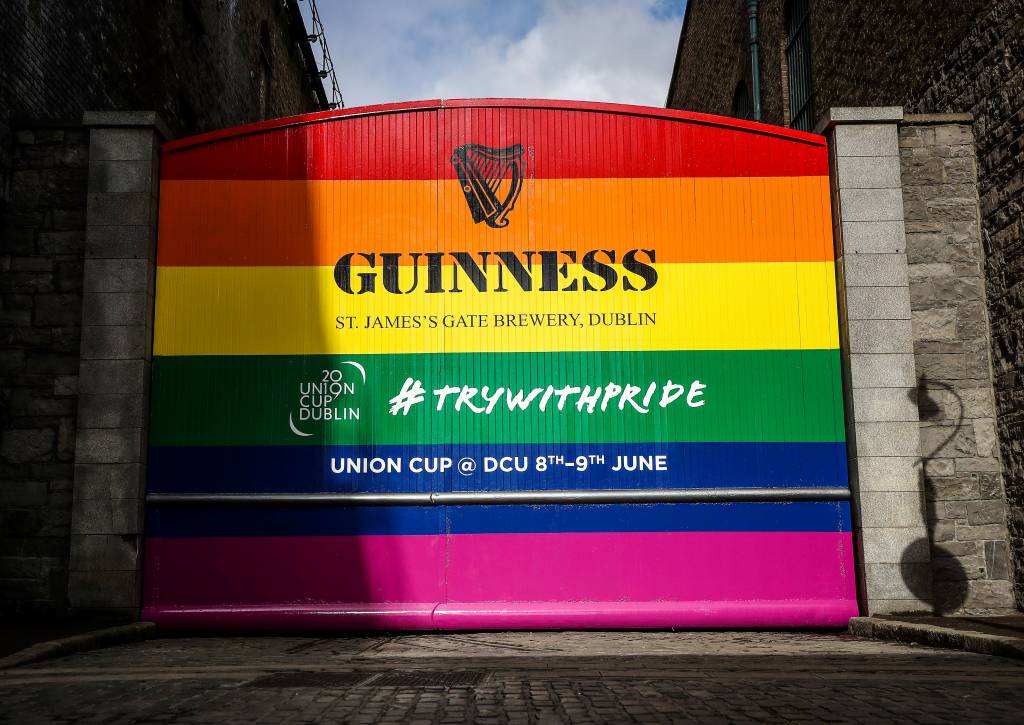 The Union Cup takes places over two days and will feature 45 teams from 15 countries. Tickets are available from www.unioncupdublin.ie and are priced at €10 for adult tickets.

We are proud to support Union Cup Dublin as it celebrates the power of rugby to unite people, and we hope Guinness gates encourage people to support the teams playing in June. The team at Guinness has championed inclusivity and diversity in rugby, values that are integral to Guinness as a brand, through a number of rugby partnerships.

“We collaborated with Gareth Thomas to tell his story in 2015, and we recently became the first commercial partner for the Women’s Six Nations. Union Cup Dublin will also spotlight inclusivity in the Women’s game by hosting the first dedicated Women’s tournament in Dublin, and we are delighted to continue to support Women’s rugby.”

We are honoured to have a global brand such as Guinness stand in support of inclusive rugby, and to see the iconic gates painted in celebration of Union Cup Dublin is epic. It is so important for us that our partners like Guinness make this tournament possible, and we’re incredibly proud to showcase how Ireland does it to our 45 visiting teams. We invite Irish people, not just rugby fans, to do the same and come out to support and enjoy the Union Cup at DCU over the weekend.”

The Guinness Union Cup gates will remain painted to support our sponsorship of Union Cup Dublin until June 10. The gates will then be repainted black.