The Ireland Women’s 7s defeated Brazil 32-7 in their final game of their Pool games at the Canada 7s today in Langford, but earlier defeats to Australia and Canada means they find themselves in the Challenge competition for the first time this season where they will face China at 6.46pm (Irish time).

Stan McDowell’s young side, which features two 19-year-olds and six 20-year-olds, will take a lot from today’s experiences against two of the top four teams in the world in Australia and Canada.

Ireland opened their morning against Australia and did well in the opening exchanges, holding on to possession and making the experienced Aussie side work well, but with Alicia Quirk and Lily Dick both crossing for tries in quick succession just before the break, with Evania Pelite quickly following, it left Ireland with a big mountain to climb.

The young side worked hard in defence, but some errors allowed Charlotte Caslick, and finally Ellia Green cross again for the Olympic Gold Medallists.

Ireland didn’t give up the fight and crossed through Hannah Tyrrell, but the 33-5 score line was not the start the team had hoped for. 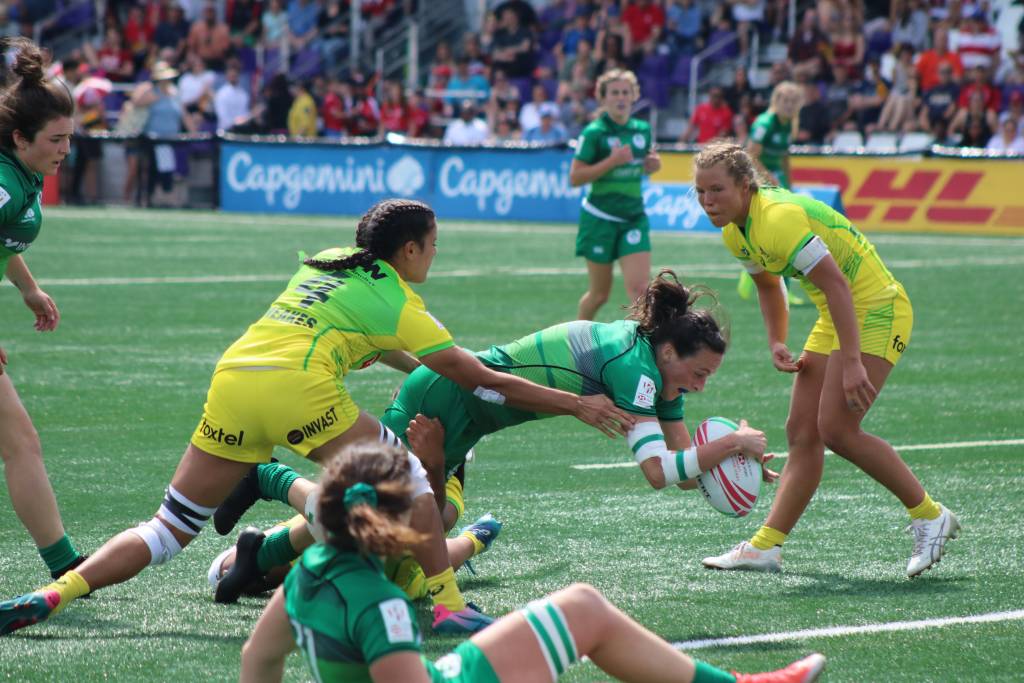 Hosts Canada were up next, and in front of a lively crowd at the Westhills Stadium, it was the visitors who were out of the blocks first, with Captain Amee-Leigh Murphy-Crowe crossing for her 24th try (in as many games) this season. 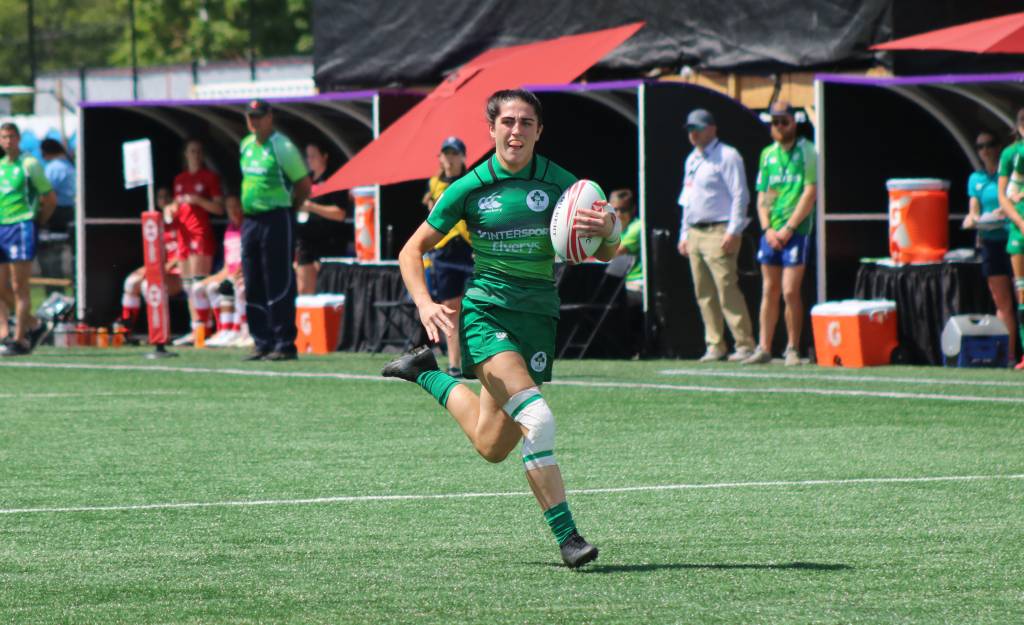 The lead was only to last 2 minutes however, when Brittany Benn slipped a tackle in midfield and sprinted clear to even the scores heading into half-time.

Canada scored two tries in quick succession through Ghislaine Landry and Karen Paquin, and despite Ireland’s best efforts, Paquin crossed again on the hooter to give her side a 22-5 win.

The final opponents of day were invitational side Brazil. The South Americans will be back on the series next season as a core side as they were the winners of the Hong Kong Qualification tournament last month.

Ireland started the game well, with Louise Galvin claiming an excellent turnover at a ruck, and with the ball shipped wide, Aoife Doyle expertly drew in two Brazilian defenders to put Murphy-Crowe into space and the Tipperary speedster touched down with less than 30 seconds on the clock.

Ireland heaped on the pressure when Brazil had the ball, and Galvin once again produced an excellent turnover, this time through a powerful counter ruck, and her fellow Munster colleagues did the rest; Doyle selflessly offloading from a big hit to send Murphy-Crowe into space to touch down for her 75th World Series try.

Ireland were caught napping from the kick-off, with Mariana Silva exposing a gap at the side of the ruck and she made ground before off-loading to her namesake Bianca who sprinted clear of the Irish defence to score under the posts.

Ireland responded well with an excellent team try, which saw all seven players on the field play their part; Doyle made a break from inside her own 22. Herself, Higgins and Murphy-Crowe all had touches before the ball was recycled though the hands of Emily Lane, who’s all-round game was excellent across the day, Galvin, Brittany Hogan who attracted the final defender to create space for Deirbhile Nic A Bhaird who touched down and sent Ireland into the break with a 15-7 lead. 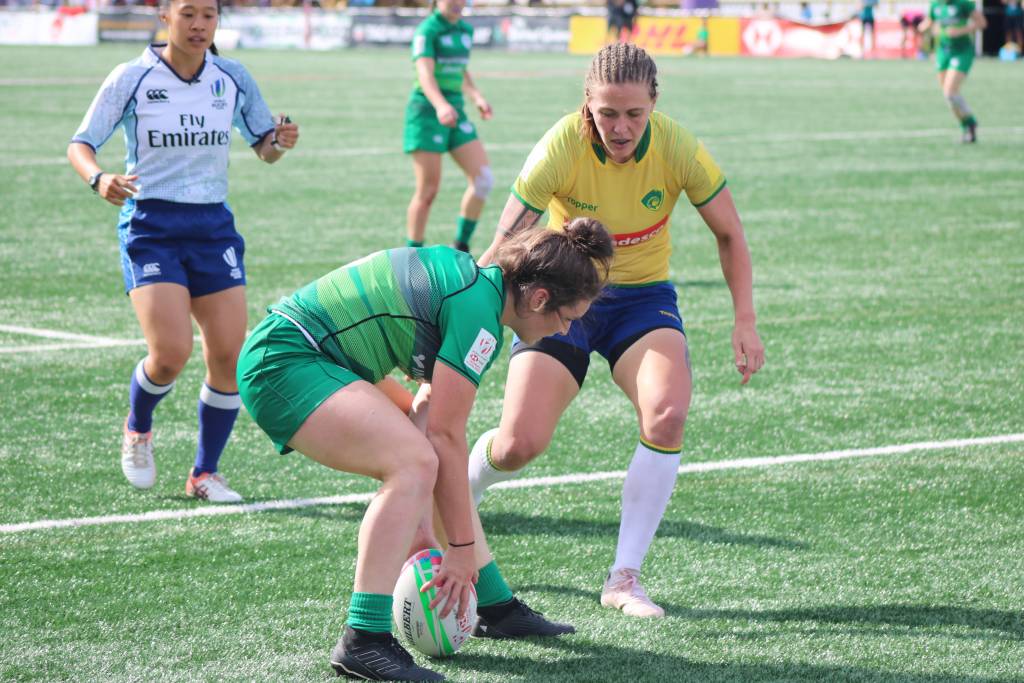 Ireland continued to bring the energy in the second-half, and Anna McGann was unlucky not to score having carried several defenders across the line with her.

Galvin then made her third big steal of the game and the ball was worked up field though Tyrrell and Claire Boles, who was then tacked high and from a quick tap penalty 19-year-old Megan Burns showed some neat footwork to get to the outside and she then found McGann who this time made no mistake to score and bring the score to 20-7.

As the clock ticked down, Ireland continued to look to build on their points tally in the hope of making the Quarter-Finals, and Eve Higgins crossed following a quick tap and then Tyrrell and Murphy-Crowe linked up beautifully on a loop play to send the Dubliner over. Higgins converted to leave the score 32-7.

The points margin wasn’t enough – as the two best 3rd places from the pools go though, Ireland missed out by 16 points, with Russia and Spain both progressing.

Ireland will face China tomorrow, with Brazil and Fiji on the other side of the draw.