Aldi and the IRFU yesterday announced the two winners of the hugely successful Aldi Play Rugby sticker competition for primary schools, which ran from January until April this year.

Launched by former Ireland and Munster Rugby Captain and Aldi Play Rugby Ambassador Paul O’Connell in January, the competition gave every primary school in the country the chance of winning one of two €50,000 sports facility makeovers.

Primary schools had to collect Aldi’s exclusive Irish rugby player stickers which were available in store every time shoppers spent €30. They then added the stickers to a large Aldi Play Rugby Poster, and for every 300 stickers collected, they answered an Irish rugby trivia question and were in with a chance of winning €50,000 for their school’s playing facilities.

As well as the winners of the two €50,000 sports facility upgrades, there were a host of additional prizes on offer. Four primary schools, one from each province have won €2,500 worth of training equipment. These schools are: 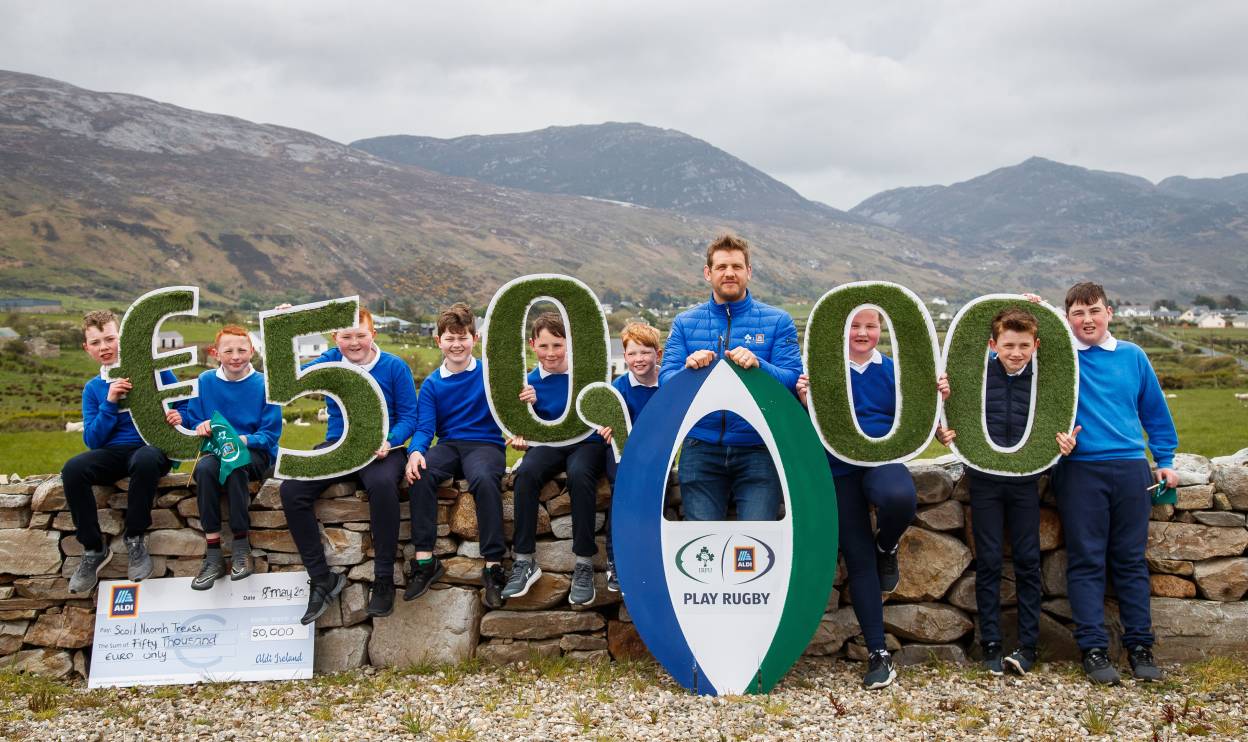 Each primary school that participated in the competition will receive an Aldi Play Rugby kit bag which includes rugby balls, water bottles and water bottle holders per completed poster that they filled out! Due to the phenomenal success of the campaign, Aldi will be sending out over 16,000 rugby balls and over 24,000 water bottles to primary schools across the country!

Aldi Play Rugby Ambassador Paul O’Connell commented: “Speaking from experience, I know what a difference good quality coaching, equipment and facilities can make, especially in the early years of developing as a player. I’d like to congratulate all the schools who took part in the promotion and to the winning schools, no doubt the prizes will make a huge difference to the pupils and teachers alike.”

“With Aldi Play Rugby, we are delighted that we can help two primary schools improve their sports facilities, giving pupils the opportunity to fulfil their potential. The promotion has been a huge success, and we want to congratulate all the primary schools who took part. Aldi is delighted to be part of Ireland’s rugby success from grassroots level, and to be supporting the building blocks of future teams through the Aldi Play Rugby programme.”

A national IRFU programme for primary school children, Aldi Play Rugby is a free, supervised and non-contact rugby programme that provides everything schools need to get started, including sessions with local IRFU staff, online coaching resources and free coaching equipment. The overall objective of the programme is to encourage school children to get active, participate in regular exercise in a safe and controlled environment and to eat healthily.

Ian McIlrath, President of the IRFU said today: “Aldi Play Rugby has already made a real impact with young kids, having helped over 100,000 girls and boys to lead a more active and healthier lifestyle through rugby. The IRFU worked in conjunction with Aldi on this competition, and a world of opportunity was created for these two lucky primary schools to upgrade their sports facilities. I’d like to congratulate everyone involved on what has proven to be a huge success.”

The Aldi Play Rugby programme has gone from strength to strength with over 100,000 children from over 1,200 primary schools across the country signed up to take part this year. Participation in the programme has increased by almost 50% since Aldi partnered with the IRFU in 2016. Significantly, during 2017 / 2018, almost half of the children taking part (44%) were primary school girls aged between 7-12.

Schools, teachers and coaches interested in getting involved can register at www.aldi.ie/playrugby