Ireland will have a high-noon showdown with tournament hosts England on the opening day of the hotly-anticipated HSBC London Sevens at Twickenham Stadium, which takes place over the weekend of May 25-26.

Anthony Eddy’s men made history with a stunning bronze medal finish at last year’s London Sevens, as Jordan Conroy’s last-minute try – and the conversion by the ice-cool Mark Roche – saw them overcome England 21-19 in an epic encounter and join South Africa and champions Fiji on the podium.

Ireland return to Twickenham in a few weeks’ time as recent winners of the HSBC World Rugby Sevens Series qualifying tournament in Hong Kong. For the second year running they will compete in the London and Paris legs as an invitational team, but next season they will be one of the series’ 15 core sides.

London is the penultimate round of the 2018/19 HSBC World Rugby Sevens Series, and Ireland have been drawn in a talent-laden Pool C alongside New Zealand, who are currently third in the overall standings and won the Dubai and Sydney titles, hosts England, who are fifth, and tenth-ranked Scotland.

It is set to be a fiercely-competitive event, especially as the race for the series title is nearing its climax and Olympic qualification is also at stake as the top four teams in the series will qualify for Tokyo 2020. Ireland will use London and Paris to build towards the Rugby Europe qualifying tournament for the Olympics in Colomiers, France on July 13-14. 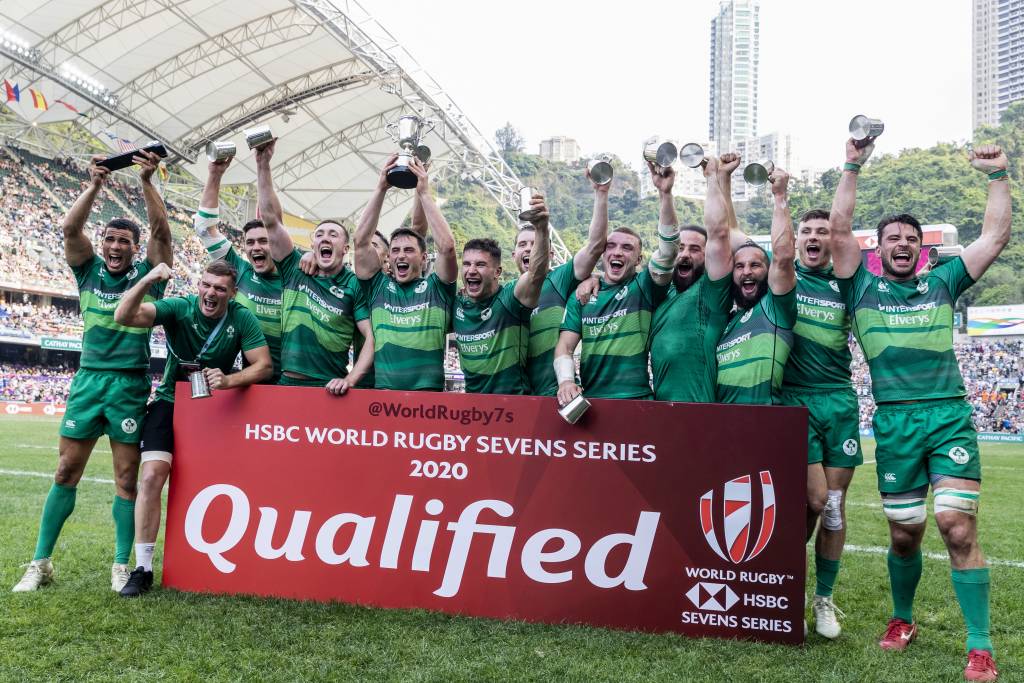 World Rugby Chairman Sir Bill Beaumont said: “The penultimate round of the HSBC World Rugby Sevens Series in London is set to be a thrilling event with the double significance of qualification to the Tokyo 2020 Olympic Games at stake alongside the race for the series title.

“Twickenham Stadium is always a special place for rugby players to perform and we look forward to another weekend of fast, skilful and highly entertaining rugby sevens in front of a large crowd in London.”

Play gets under way in London at 9.30am on Saturday, May 25 when Australia and Wales take to the field in the first of 45 fast-paced and action-packed matches. Ireland renew rivalries with England at 12.04pm, take on New Zealand at 2.48pm, and wrap up the pool stages with a Celtic derby against Scotland at 5.54pm.

In between games, spectators can enjoy live music and DJ sets, fairground rides, children’s entertainers, garden games and chill-out zones, creating a rare and unique sporting occasion for all. Adult tickets start from £30, with tickets for accompanied children under 15 starting from £10. Children under two are admitted free-of-charge. For more information on tickets, visit www.englandrugby.com/tickets.

For more information on the series, visit www.world.rugby/sevens-series and follow @WorldRugby7s.