On her way to becoming a fully-fledged international, Ireland Women’s prop Linda Djougang has taken the road less travelled. Originally from Cameroon, she moved to the north Dublin village of Rush in 2005 – neither a rugby stronghold as she readily admits.

“I came over at nine. I’m here with my dad and my aunt too. I’m from Douala which is the second biggest city. It was definitely different to Ireland! The food is amazing, I have to say. It’s very spicy food. My first language is French. Rugby is not a common sport. Even in Rush, it’s not common,” she commented, speaking ahead of today’s Six Nations clash with Wales in Cardiff (kick-off 1.30pm).

“I’ve been here more than I’ve been in Cameroon. I’m 22 now. It’s definitely home. Obviously Cameroon is home, it’s the motherland, but I’m more Irish than probably Cameroonian. Growing up I was so sporty. I wanted to be in the Olympics and that would have been the dream.”

As well as her keen interest in athletics, Djougang also reached an All-Ireland final in the shot put. It was not until the age of 18 that she enjoyed her first dalliance with rugby, specifically the Tag form of the game.

“When I finished my Leaving Cert, I got into college. I didn’t get the points I needed to go into general nursing, so I did have the Trinity access programme. From there, at the end of the year, you get an internship. I really wanted to get to know my colleagues and everything there. There was a social Tag rugby team and I was like, ‘what is Tag rugby!?’

“I signed up for it and they actually cancelled that social event. Then they were playing a Tag final and they needed a certain amount of girls to play and I was still available for that. I went there and I wasn’t much help to them, because I didn’t know anything. I didn’t even know what a rugby ball looked like. From there the Wanderers manager saw me, where basically I was just running when I had the ball.”

Following her initial steps into club rugby at Leinster Senior League side Wanderers, she eventually joined forces with Old Belvedere in the All-Ireland League. Already possessing a burning desire to play international rugby, Djougang learnt the tricks of the trade from some notable Ireland stars of the recent past.

“I didn’t really know what AIL meant. All I knew was that most of the girls that played international were from Old Belvedere. My mum always told me, ‘if you want to be the best, you always have to follow what everyone is doing’. They have more than 10 players in Old Belvedere that play international. I said, ‘I want to go to Old Belvedere. I’m going to see what they do there’.

“I went there and Alex Denby was our coach. He had never seen me play and he said, ‘I don’t think you’re ready for AIL. You’re playing division two’. The second team, not the first team. I played my first game for Old Belvedere in Tullamore, with the second team.

“After the game, they were like, ‘okay, you’re playing AIL’. Since then I’ve never looked back. I just kept playing, learning from the likes of Ailis Egan, Maz Reilly, Jenny Murphy. Good people to play with and you definitely need to get that challenge.”

Originally a back rower, Djougang had a number of unsuccessful trials with Leinster. Upon the suggestion of current Ireland head coach Adam Griggs, she transferred to her current position in the front row, setting her on the path to an eventual call-up for this year’s Six Nations.

“I changed position, because I was back row. I got into the squad for the Six Nations, where I was dropped. Then Adam called me and he was like, ‘if you changed position, you’ll probably have more chances. Say front row?’. I said, ‘Definitely, front row’. I hung up the phone after and I called my coach Josh (Brown) in Old Belvedere, ‘I think I’m moving position!’.” 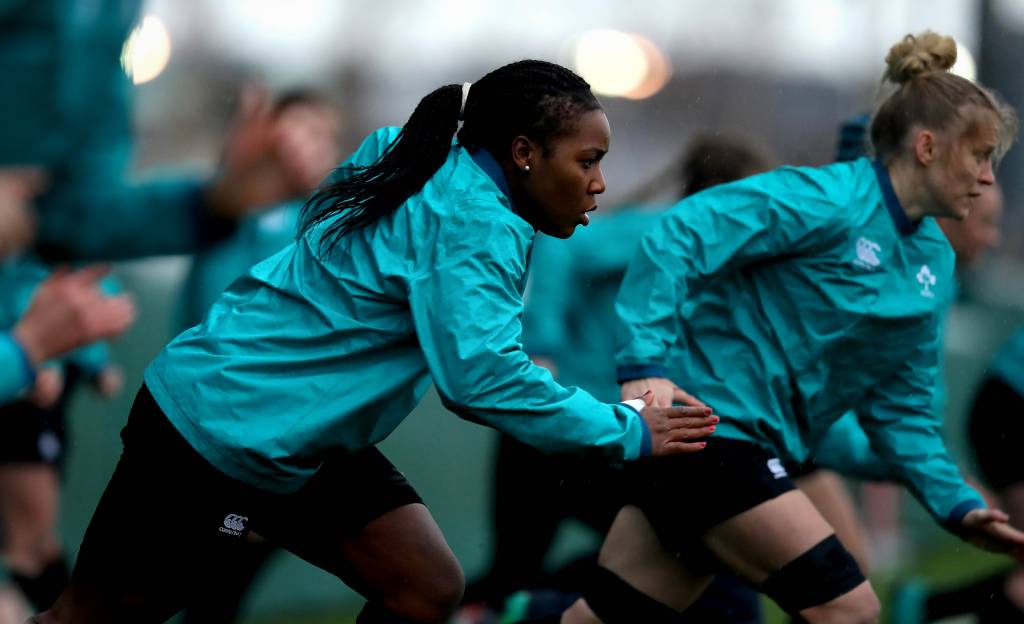 Her Ireland debut came as a replacement during the first round defeat to England last month, and she has added further caps in subsequent games with Scotland and France. Having been an unused replacement for the Italy game in round three, Djougang is hoping to make her fourth appearance of the campaign against Wales this afternoon.

It has been a remarkable journey up to this point and she is excited about the road that lies ahead for her and this Ireland team. She added: “It has been an incredible journey. I don’t want it to end, but at the same time when I finish it will be an amazing experience to even cherish. I do take pictures I send to my mum (who still lives back in Cameroon), ‘oh my God, I’m representing Ireland’.

“I’m loving every single second of it. It’s definitely something that I worked hard for and I didn’t think it was going to come so soon. I was definitely ready for the opportunity, taking it with two hands. Play every minute you’re given on that field to just give it 110%.

“Wearing that green jersey, you feel like it was so worth it. Even when we do jersey presentation. When they give you that jersey, I’m like, ‘oh my God, this is mine’. It has been an incredible journey and it’s only the beginning of Women’s rugby. We hope to just keep moving forward and definitely finish against Wales on a high note. That’s really the goal now. Hopefully we accomplish that.”