Following a memorable debut in the last round, young flanker Claire Boles is hopeful that the Ireland Women’s can make it two Six Nations wins on the bounce against Italy in Parma tonight (kick-off 7pm local time/6pm Irish time).

A prominent member of the Ireland Sevens programme in recent seasons, Boles was called into the Women’s 15s squad by Adam Griggs in December. She played the final 20 minutes of the recent bonus point victory away to Scotland, deputising for one of the team’s leading lights, Claire Molloy, in the back row.

“It was definitely an important game for us,” reflected the 20-year-old. “It was kinda like win or nothing, if you know what I mean? We had to bounce back, but it was a tough one to come back from (the England defeat). The girls dug deep, definitely, and put in a very good performance against Scotland.

“I really enjoyed it and it was good to get the win on the debut. In the camp there’s good vibes and obviously because we were off this weekend, we can’t wait to get back and play Italy.”

For Saturday’s game at Stadio Sergio Lanfranchi in Parma, Ireland will measure up against the Championship’s meanest defence on current form. Second-placed Italy have leaked just 10 points in their two games to date and lie three points adrift of pace-setting England.

Despite the growing confidence within the camp, Boles is under no illusions about the task that awaits them, saying: “Italy did beat Scotland as well, so we’ll have to be prepared. It’s going to be a tough match. They definitely move the ball quick and they’re good at executing. They’re good in possession, so they hold onto it. Our defence will definitely have to be up to the test.”

Having featured at the Dubai Invitational Sevens in November when she was joined by five of her Railway Union club-mates, Boles continues to have a foot in both Ireland camps. As well as juggling the two codes, the Enniskillen youngster also has to factor her college commitments as a third year student of chemical engineering in UCD.

“(I’m) balancing it (college) with a bit of everything. I’m in third year. Nearly there, over halfway anyway. I’m doing a bit of both (codes). The 15s will have camp at the weekends and then I’ll be doing Sevens during the week. It’s just a bit of load management, how much you do.

“15s is obviously 80 minutes and Sevens you’re only playing 14. Sevens is more high speed, fitness and 15s is a lot of endurance. You’re running for a long period of time. It’s still good to have your base line fitness there.”

Boles’ own rugby journey began at Enniskillen RFC, although she tried her hand at a number of sports before concentrating solely on the oval ball. The Fermanagh club is one of the fastest growing in the province of Ulster, with a number of the players currently making waves on the provincial and international scenes.

Boles is joined in the international set-up by Kathryn Dane, the scrum-half who made her debut against England and is set for her first start against the Italians. The are now rivals on Dublin’s southside with Dane plying her trade with Old Belvedere and Boles at Railway Union.

Ulster Academy star Robert Baloucoune (pictured below with Claire and IRFU President Ian McIlrath) is someone that Boles knows well from her time in the Sevens programme, while Will Addison has also linked up with Enniskillen Rugby Club – it is his mother’s hometown – since his summer arrival at Kingspan Stadium. 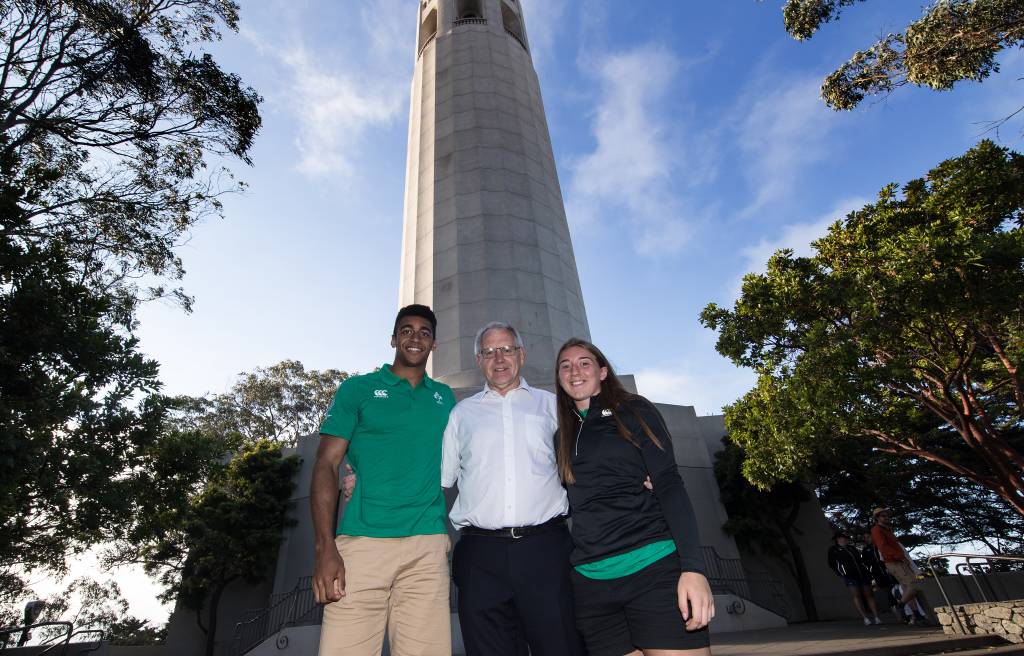 Boles explained: “Within Enniskillen Collegiate I played Tag and then one of the coaches came in from the rugby club, so I joined. I was playing Under-16s with them and i just moved up to U-18s. I played a bit of everything in school. Netball, hockey, a bit of soccer. Everything really. I was always sporty. Rugby felt more natural. I just loved the game really. I just kept going.

“For 15s I would have just played club and then underage at province. It was definitely a different experience. I’m used to it kinda with the Sevens, but it’s a completely different set-up. Rob is doing really well in Ulster. He played in the men’s team (in Enniskillen) and then went to Ulster, but he played a bit of Sevens as well there last season.”

During her time as a Sevens player, Boles has had the opportunity to visit some exotic locations around the globe. She also enjoyed an extended spell on the Gold Coast last summer, lining out for Bond University. This has become a regular venture for Irish players in recent years and Boles believes it helped to expand her horizons – both and off the rugby field.

“It was me, Stacey Flood and Katie Heffernan. I’d never been to that part before. I go to a lot of places. I’ve always wanted to discover the world and you can definitely do that with Sevens. We were in Colorado there in September and Dubai. They’re unbelievable places.”