Already in the driving seat courtesy of their two-try 23-9 victory at Galashiels, the outcome of Friday’s return match ensured the All-Ireland League stars came away with the silverware in this annual contest for the first time since 2014.

“Our scrum was excellent. I think we got two, if not three, scrum penalties. We were very solid all day. Our lineout was excellent. I think we operated at 100%. Set piece, we knew it was going to be a key facet of the game. I think we made a bit of a mess of the Scottish lineout actually. Brian Hayes, Iain Prendiville, Conor Kindregan, Luke Cahill were absolutely outstanding in that regard. Michael Melia as well. I’m just very happy with the way that went.

“The seven-day turnaround, the Friday to Friday, the intensity of what goes on in that week, has been significant. I guess we’d a lot of tired bodies out there. We sorta fell off a couple of tackles and allowed them to score. It’s a win. We won the war, got the trophy. It’s nice to have it (the Dalriada Cup) back here for the first time in five years.” 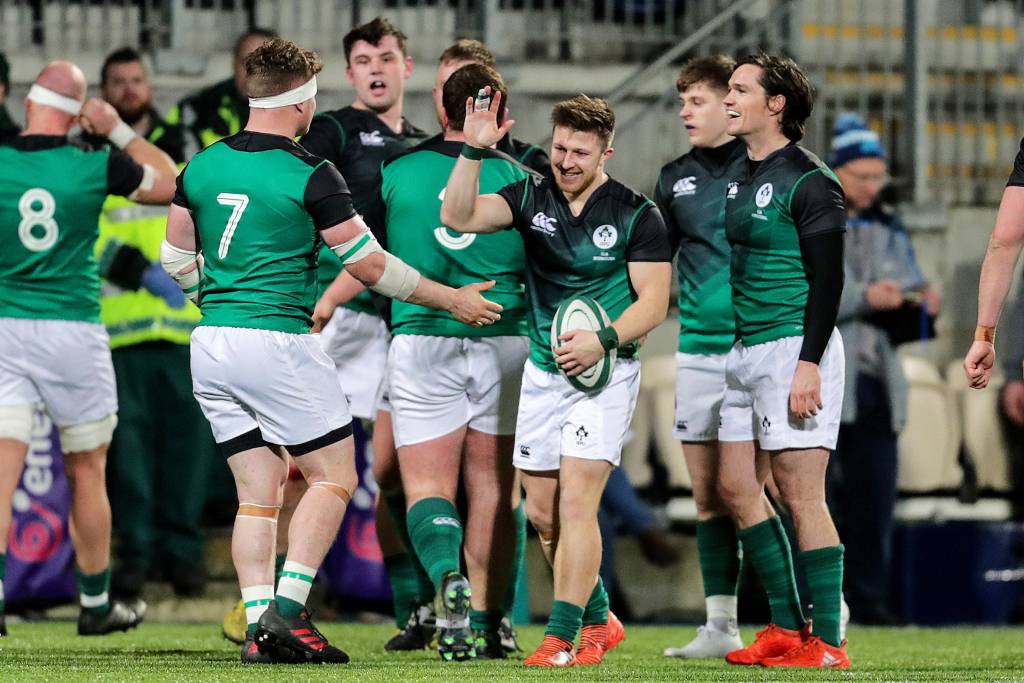 It had been a testing start on Friday for the hosts, who fell behind to Robbie Nelson’s converted try inside the opening minute. This certainly was not part of the game plan for Lennon, the management team and the players, even if he was expecting a reaction from a wounded Scottish outfit.

“They obviously came to play. They obviously wanted to play loose and have a real go at us. We knew they were going to do that,” he admitted. “We went 7-0 down, it was quite a soft try when you look back on it. We didn’t exit properly and we got ourselves under pressure. As I said, there’s a lot of experience in that squad.

“Niall (Kenneally, the captain) is a very good leader. Brian Hayes, Michael Melia is club captain for Terenure. There’s a number of other guys there that are leading their own clubs around the place. They didn’t panic and we got a message on, ‘we’re still winning here’.

“The aggregate score is something. Except for the World Cup repechage, it doesn’t exist in any other competitions. It’s a different mindset nearly. You’ve just to keep chipping away. We got ourselves back in the game and (were) pleased to do that.”

It also proved to be a memorable night for Young Munster flanker Dan Walsh, Naas prop Adam Coyle and back rower James Murphy from Cork Constitution to make their Club international debuts. Walsh and Coyle previously played for the Ireland Under-20s, with the latter featuring off the bench in the 2016 World Rugby U-20 Championship final against England.

Walsh was thrown in the deep end as a direct replacement for Cork Con’s formidable openside Joe McSwiney, but Lennon was thrilled with the youngster’s performance, noting: “Those guys (Walsh and Coyle) played Irish U-20s, both of them. They’ve had experience at a level before. They both were very keen. Dan obviously had a very unfortunate experience where he broke his shoulder in the first U-20 Six Nations game and then he got glandular fever before he went to the World Cup.

“He was just raring to go tonight. He was really looking forward to it. I thought he did a really good job. He was very effective at seven, considering we lost Joe McSwiney last week, who was one of our best players last year and was absolutely outstanding this year. He was incredible last weekend in Scotland.

“When you lose someone of that quality, to be able to bring Dan Walsh in or be able to bring James Murphy in, is just testament to the league and the AIL in itself. How much quality there is throughout.”

Having turned the tables on Scotland in his third season at the helm, Lennon admitted he is uncertain about his future within the Ireland Club XV set-up. There have been significant changes in playing personnel during this time and he expects a similar shake-up next year, regardless of who is in charge.

This is something that was spoken about in the hours leading up to Friday’s crunch game and Lennon felt it was reflected in the final performance. “We spoke tonight about how this may well be my last game as the Irish Club team coach because maybe it’s somebody else’s turn. We looked around the room and I said to the lads, ‘a lot of you guys have been with us for two years or maybe three years’.

“Eamonn Mills is with us for three years, but whoever comes in next year might not pick anybody in this room. You’re kinda back to square one, so therefore this is a big opportunity to possibly put on an Irish jersey which could be your last time. Go out and perform like your last time was kinda the message. Be proud of yourselves and be proud of your performance.

“I think, one to 23, they really fronted up physically in what was a very physical encounter. The breakdown was very physical out there. Some of the stuff that was going on was very tough and we talked about that at half-time. That’s what we really needed to clean up.

“Any opportunity to put on an Irish jersey has to be grabbed with two hands, doesn’t it? It doesn’t come around that often, especially winning silverware,” added the Old Wesley head coach, who has been assisted by Naas player-coach Johne Murphy in regaining the Dalriada Cup for the Ireland Club side.