The Ireland Club team got their quest to regain the Dalriada Cup off to a strong start with a two-try 23-9 win over the Scotland Clubs at Netherdale in Galashiels this afternoon.

It was just a second ever victory for an Ireland Club side on Scottish soil and gives Morgan Lennon’s men a two-score cushion heading into next Friday’s series decider at Energia Park (kick-off 7.30pm). Tickets for the Donnybrook rematch are available to buy on Ticketmaster.ie.

“To win in Scotland is great,” said Ireland head coach Lennon. “But the two-score difference doesn’t mean anything.  There’s no good coming over here, doing all the work we did to win the game today and then going to Energia Park and losing it. The aggregate thing doesn’t really matter to us. The lads want to win the two games. If you win the two games, the aggregate doesn’t matter anyway so that’s the target.”

The Scots’ strong start to this fixture in 2018 proved pivotal in them retaining the Dalriada Cup. This time around, the Ireland Club XV led 6-0 after six minutes. It was an abrasive opening spell with a mini-break from Daniel McEvoy and good pressure on the Scottish lineout from Brian Hayes. Aidan Moynihan was assured in taking his chances off the tee.

The next 15 minutes belonged to the hosts. A sounder set piece put them back in the frame and a Gregor Hunter penalty halved the deficit after 14 minutes. The out-half had played for Glasgow Warriors against both Munster and Ulster in the 2015/16 season and his yellow card on 23 minutes was a massive boost to Ireland. 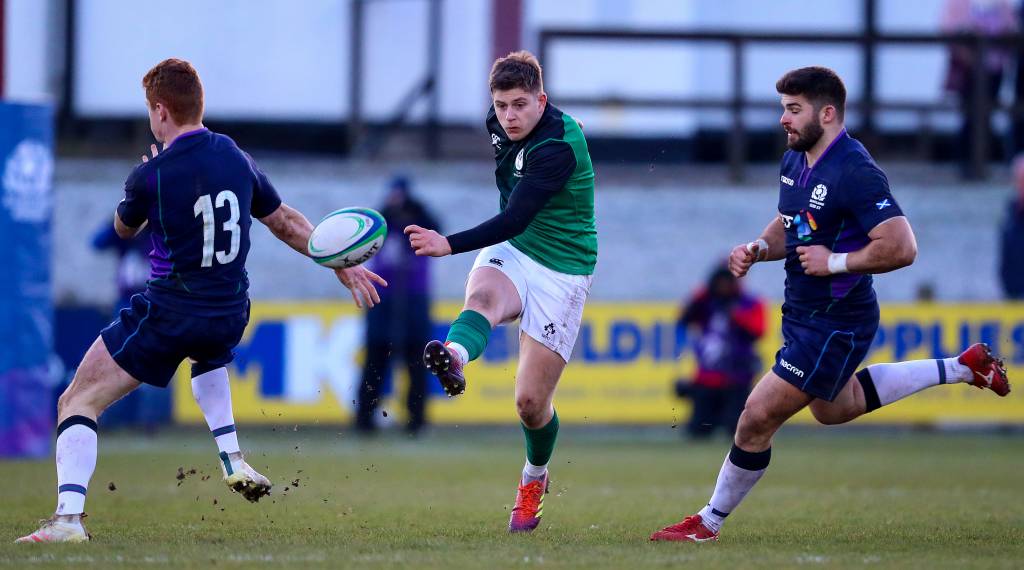 His high tackle on Lansdowne winger McEvoy, close to the left touchline, gave Ireland the penalty from which they built a 13-6 interval lead. After John Poland and Michael Melia were tackled short, it was Conor Kindregan who found the smallest of gaps in the cover to power over and Moynihan slung over a well-struck conversion. Lennon’s charges came close to adding more tries either side of the break.

Old Belvedere flyer Jack Keating did superbly well to catch and break off Poland’s box-kick, and popped up again to keep the fast-paced attack going before Eamonn Mills’ try was unfortunately ruled out for a forward pass from captain Niall Kenneally. Influential Cork Constitution number 8 Luke Cahill also knocked on in front of the posts on the stroke half-time.

After the restart it was Keating who went close but was denied in the left corner after good link play again from Kenneally and Matt D’Arcy off a miscued Scottish lineout, which was gathered by Ian Prendiville at the rear and carried forward up towards the hosts’ 22 by Garryowen hooker Liam Cronin, whose older brother Neil captained the Ireland Club side last year.

Number 10 Moynihan knocked a 42-metre penalty in off the left hand post on 57 minutes as the Scots strayed offside, but it was back to a one-score game within moments as Hunter teed up a tense final quarter at 16-9. 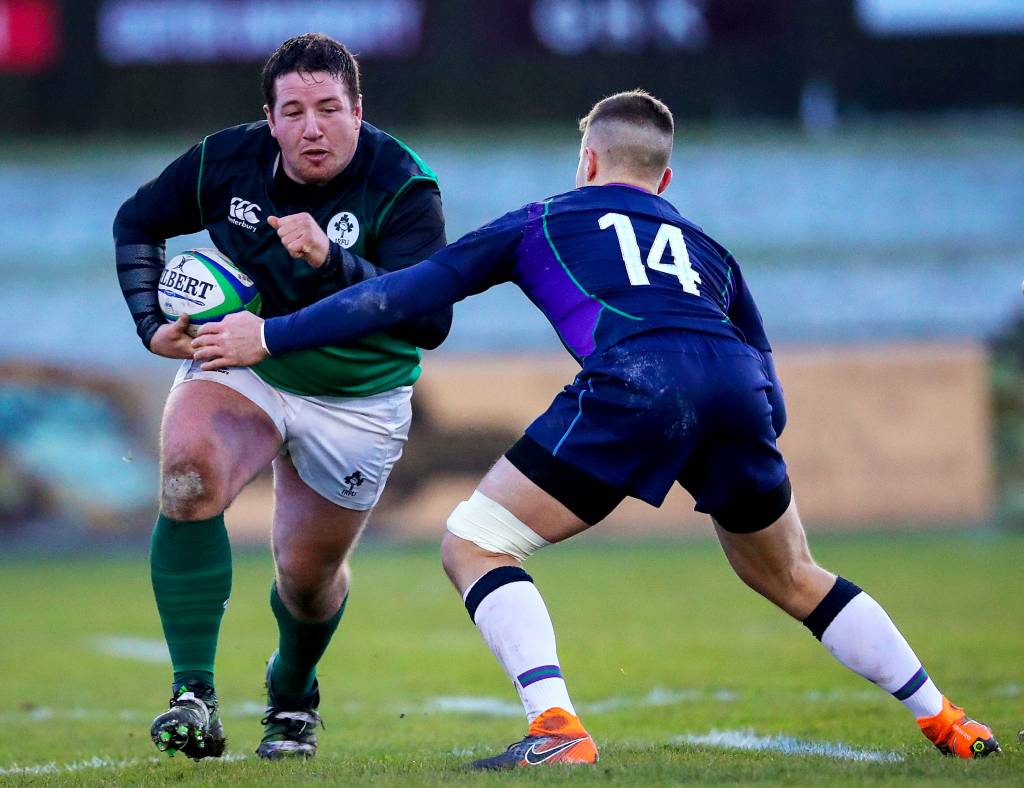 Scotland’s dangerous scrum half Murdo McAndrew was then wrapped up by Mills as the home fans bayed for a try. Crucially, the Ireland Club XV scored next to wrap up the win. Alan Bennie, who was sprung from the bench, and Cahill combined from the scrum half’s nicely delayed pass to get the men in green within striking distance in an attack which also involved Michael Brown.

Openside Joe McSwiney, with Garryowen’s Andy Keating on the latch, was adjudged to have been held up as he crossed the line, but Cahill, the workhorse Cork Con back rower, was not to be denied from the resulting five-metre scrum. He locked up the man-of-the-match award as he linked with Bennie before crashing over past the covering Andrew Simmers a couple of phases later.

Replacement out-half Callum Smith from Malone brilliantly nailed the difficult conversion for a 14-point winning margin and a first Irish victory in the match-up since 2011. However, it will be a ‘it’s still only half-time’ mentality for the squad coached by Lennon and Johne Murphy, with a fascinating return fixture still to come.