The Red Roses had considerable joy in this department when the two sides met at the Ricoh Arena in last year’s Six Nations, with Adam Griggs’ charges eventually falling to a comprehensive 33-11 defeat.

It was also a potent weapon when England triumphed by the same margin in a Twickenham Test last November (37-15) and it comes as little to surprise that Ireland have zoned in on this particular area during their recent training camps.

“It’s something that they love to run and that they will try and do against us. We’re quite aware of it, so we’ve been practicing in camp our tactics around trying to upset that. It’s definitely something we’re aware of,” commented McDermott, speaking at the team announcement in sponsors Aon’s head offices on Tuesday.

A new cap in the 2018 Six Nations, she was an 11th hour replacement for Nichola Fryday in the runaway round three victory over Wales, and McDermott will play in her sixth consecutive international match tomorrow evening in Donnybrook.

Although she still encounters some pre-game nerves, the former UL Huskies basketball star has become a calming influence in the Irish pack. “I’m excited now. It’s about fine-tuning (things),” she explained. “We were in the gym getting the last few reps in and head into camp to polish off the work we’ve done over the last few weeks.

I’ll probably be a bit nervous the morning of the game. We’ll have a team walk through and that will kind of settle me a bit. Once the warm-up starts there’s no time for nerves then. It comes with the experience. The more often I play there the more experience I get. For me, it’s about making sure I have all the preparations done.

“I’ll spend the rest of the week looking at the English lineout and scouting it, learn them and try and disrupt as many of theirs as we can. And then when we’re in camp, that we’d rep out our own and be sharp and as clinical as possible. If we’ve all that done, there’s not too much to be nervous about.”

When you consider she only took up rugby in 2016, the Sligo native has enjoyed a remarkable rise into the senior international ranks. In addition to establishing herself as Ireland’s primary target at lineouts, the 6ft 1in McDermott was vice-captain for Leinster’s Interprovincial title success earlier in the season.

Nonetheless, she freely admits there is a lot of room for her game to develop. Ireland forwards coach Jeff Carter and scrum coach Mike Ross will be a big help in this regard, but she has also gained considerable insight from Grand Slam-winning second row legend Marie Louise Reilly, who was part of the Leinster Women’s management team this season.

It’s only my third season, so I still have a huge distance to go and still an awful lot more to learn. We’ve a lovely inclusive environment there and sports environment. With the girls, if there was ever a question or a doubt or anything like that, there was always someone that’s got your back and helps you out.

“She (Reilly) is a wealth of knowledge. It’s just incredible the knowledge she has, lineouts especially. Just being able to read a lineout and just know it so fast. It was very inspiring and I loved working with her. I definitely learnt a lot from her and it’s somewhere that I’d like to aspire to get to.” 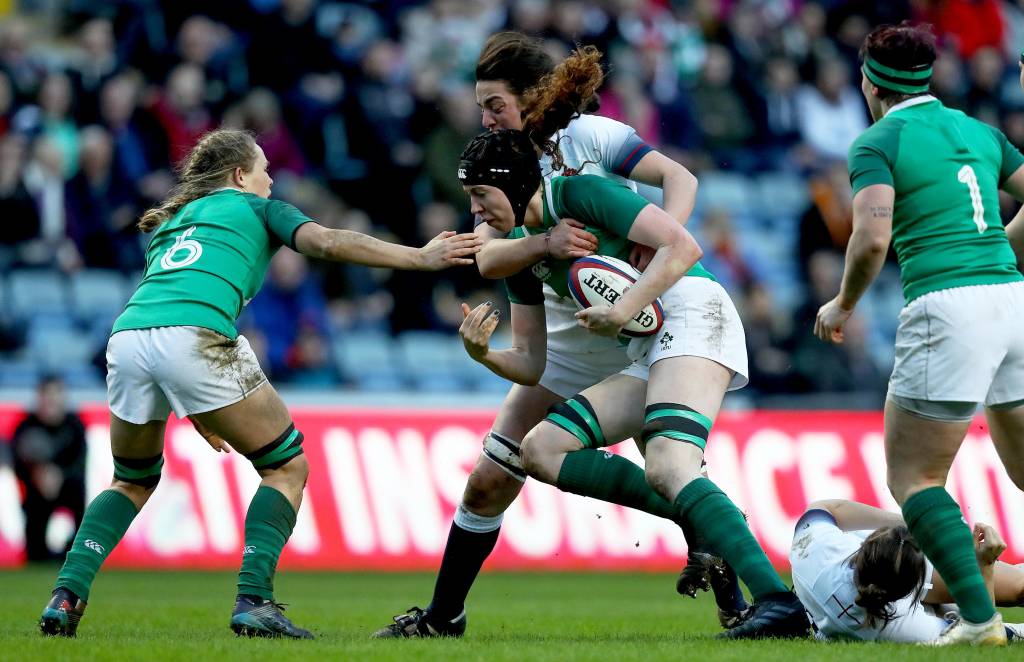 Away from her preparations for the Six Nations, basketball is a sport that remains close to her heart. She was a keen observer of the Women’s National Cup final at the National Basketball Arena in Tallaght last Sunday, where Liffey Celtics were crowned champions for the first time in their history.

“They were brilliant. We were in camp on Saturday night, so a lot of the girls came to my hotel room and there must have been about 15 of us in the room watching the men’s final. They all couldn’t believe how exciting it was because it was quite close.

“The women’s final was on Sunday night when we got home from camp, so I tuned into that one. It was nice to see Liffey Celtics get their first cup. I played with them and played against them (Liffey and fellow finalists Brunell). A couple of them would be internationals so I played with them at international level. And then you’d forever be playing against them in club.”

As daunting as the English challenge may be, the partisan nature of the crowd will always be factor when Ireland are on home soil. McDermott is hugely excited at the prospect of taking on the world’s second-ranked team at Energia Park, which has been the girls in green’s home ground since 2016.

“You always love playing England, so there’s that bit of extra rivalry between us and having them at home will be hugely exciting,” she continued.

Hopefully we’ll have a great crowd at Energia Park and we’ll get a big performance in and who knows what will happen after that.”