Single-day tickets for July’s Rugby World Cup Sevens in San Francisco, across a range of seating categories, are now available for each day of the three-day tournament, giving fans more choice than ever before ahead of the first Rugby World Cup event to be held in the USA.

With the recently confirmed innovative ‘knockout’ tournament format, both the Men’s and Women’s teams will have to win every match to be crowned World Cup winners.

Single-day tickets will give existing fans more flexibility to follow their favourite teams as they progress through the tournament while also attracting new fans, who will have the opportunity to get their first taste of this fast-paced, dynamic sport on a day-by-day basis.

History will be made in July when the Ireland Men’s and Women’s Sevens teams compete in the same Rugby World Cup Sevens competition for the first time. Both sides qualified for the tournament last summer via the Rugby Europe Sevens Grand Prix Series.

The Ireland Women will be the first Irish team to grace the iconic AT&T Park in San Francisco’s Bay Area, taking on familiar foes England in the round of 16 on Friday, July 20 at 12.12pm local time/8.12pm Irish time. The winners of that game will progress to the Championship stage to play either top seeds and RWC Sevens holders New Zealand or Mexico, while the losers will compete for the Challenge Trophy. 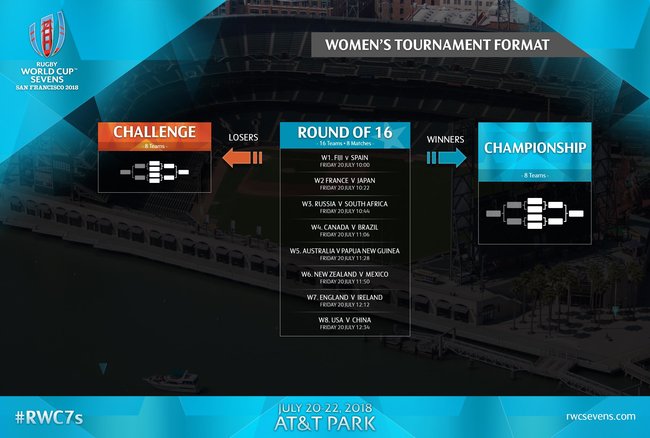 Captain Lucy Mulhall and her team-mates come up against England regularly on the European and World Series circuits, defeating them for the first time in Langford last May – Louise Galvin and Mulhall crossed for tries in a 14-10 win – and adding two more victories in Malemort the following month (24-12 and 26-7).

England gained revenge in last July’s final European tournament in Kazan, winning 21-17, and are currently one place and three points above ninth-placed Ireland in the 2017/18 World Series standings. Any potential meeting of the teams in the series’ penultimate leg in Langford this week, and the first leg of the Rugby Europe Grand Prix Series in Marcoussis, will certainly have added spice.

Anthony Eddy, the IRFU Director of Sevens and Women’s Rugby, and IRFU Sevens coach Stan McDowell are busy men at the moment, preparing both the Men’s and Women’s squads for a jam-packed summer schedule of tournaments leading up to the World Cup. Despite the recent disappointment of missing out on qualification for next season’s World Series in Hong Kong, the Ireland Men will get their first taste of top tier action as an invitational team at the London Sevens tournament on June 2-3, when they join Australia, Spain and Wales in Pool B.

It will be ideal preparation for the Rugby World Cup Sevens where they have been paired with Chile in the pre-round of 16. That opening game in San Francisco will take place on Friday, July 20 at 3.35pm local time/11.35pm Irish time.

Like Ireland, Chile were knocked out of last month’s World Series qualifiers at the semi-final stage. Ireland played the Chileans at the Oktoberfest 7s earlier in the season, recording a 24-7 victory with Ian Fitzpatrick, Harry McNulty, Hugo Keenan and Alex McHenry sharing out the tries.

The winners of Ireland v Chile at AT&T Park will meet South Africa, the top seeds and last year’s World Series champions, in Friday night’s round of 16 at 9.15pm local time/3.15am Irish time. The losers of the Ireland-Chile clash will drop down to the eight-team Bowl competition. 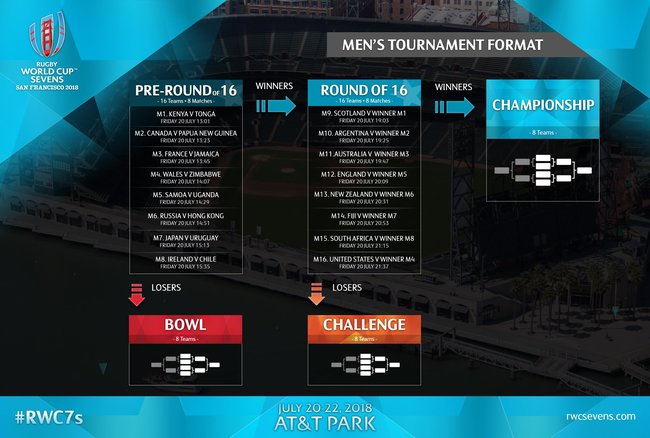 World Rugby Chairman Bill Beaumont said: “Excitement is building as we draw closer to the highly-anticipated Rugby World Cup Sevens 2018, which promises to be a spectacular tournament hosted at AT&T Park in San Francisco.

“Sevens is a fantastic introduction to rugby and with the launch of single-day tickets for all days of the competition, not only will existing fans have more flexibility and choice, it will enable us to attract new audiences by giving the option to come and experience an action-packed day of Sevens rugby at its flagship event.”

Ticket sales have already surpassed 63,000, by way of three-day tickets, and fans can now purchase three-day passes or single day tickets via the official domestic and international supporter tour programmes. Ticket information can be found at www.rwcsevens.com/tickets.