From Hakas to hot dogs, there was plenty of fun to be had on and off the pitches at Galway Corinthians RFC last Saturday as they hosted the first Aviva Mini Rugby Festival of the 2018/19 season. 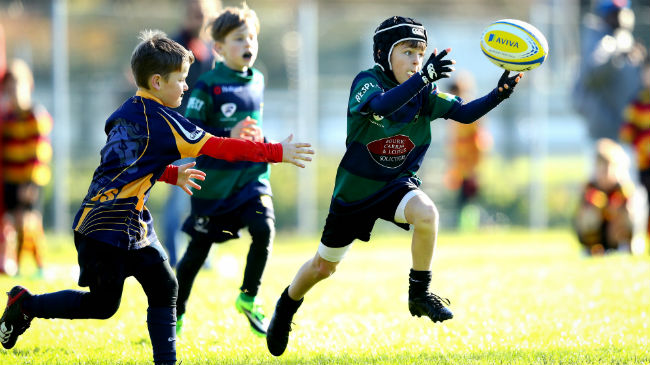 From Hakas to hot dogs, there was plenty of fun to be had on and off the pitches at Galway Corinthians RFC last Saturday as they hosted the first Aviva Mini Rugby Festival of the 2018/19 season.

On a beautifully crisp autumn day the cones were laid, the referees and pitch co-ordinators were briefed, and the buses rolled in from all corners of the province.

19 clubs brought over 400 boys and girls to the Aviva Mini Rugby Festival. For many it was their first taste of a large mini rugby festival and judging by the tired but happy faces that departed later in the day, they will be back for more.

The children taking part know how to keep score but what really counts at the final whistle is the number of smiles, the friends made, and the skills learned. By that tally everyone really was a winner on Saturday afternoon.

Brian O’Neill, Head of Communications, Brand & Sponsorship with AVIVA Ireland, was delighted with the day, saying: “We’re thrilled to be associated with these festivals for the last ten years. It’s our opportunity to give something back to grassroots rugby. We’re committed to helping the IRFU develop the game at this level making sure boys and girls, whatever their ability, gets the opportunity to play rugby and learn the basics of the game.”

Frank Shortt is the Mini Rugby Coordinator in Corinthians. He commented: “We have about 480 kids here this morning, the weather is fantastic and we’re delighted to host everybody from Connacht. It’s great for the coaches and kids but also for the parents because they love to see festivals like this being hosted close to home.”

The #AvivaMinis Festivals head to Ulster and Munster this weekend with City of Armagh RFC and UL Bohemian RFC hosting on Saturday and Sunday respectively. Tullamore RFC will host the Leinster festival a week later with the National Festival set for the Aviva Stadium later in the season.

Check out the photo gallery from the day on our Facebook page.