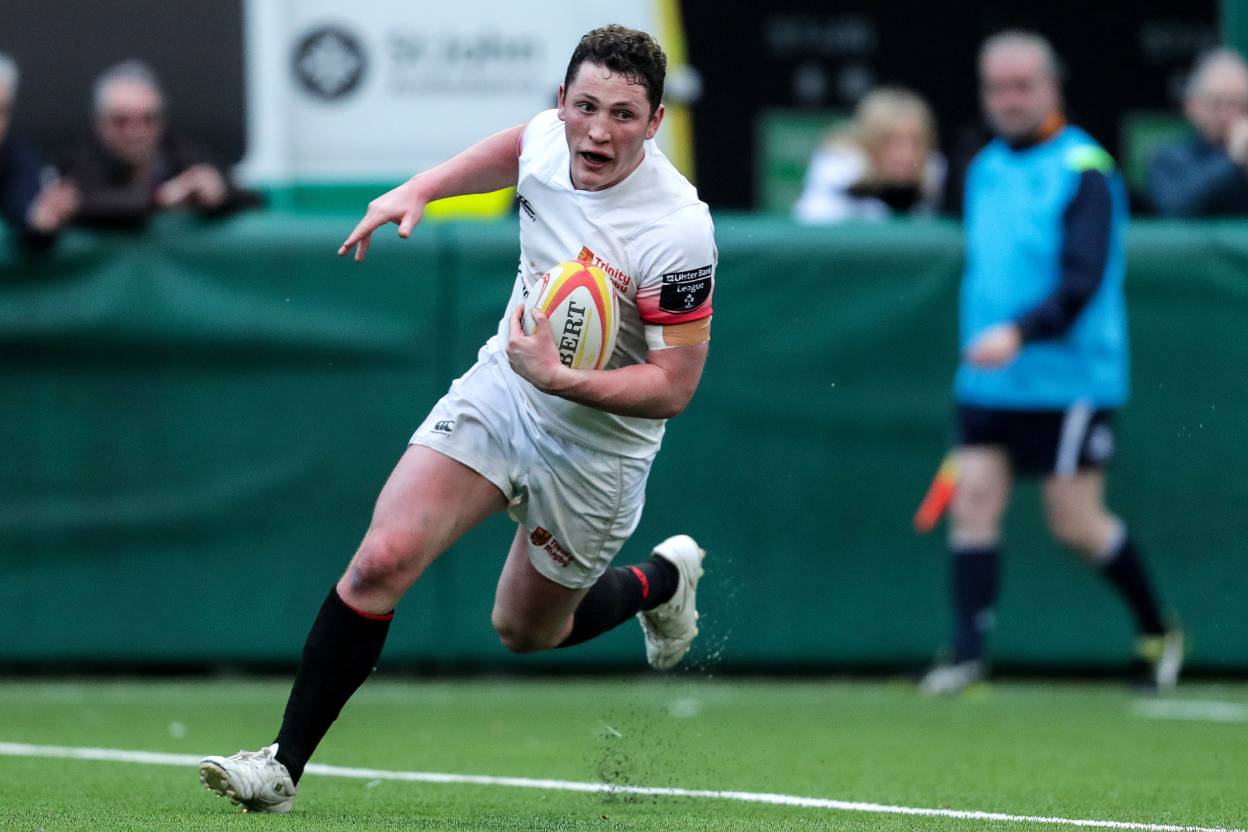 One of the most entertaining matches in the All-Ireland League on Saturday took place at College Park where Dublin University edged out UCC on a 31-29 scoreline. Check out all eight tries from the exciting student derby.

It was four tries apiece in this mile-a-minute College Park contest, with Trinity out-half James Fennelly having a crucial impact off the bench. He converted their bonus point score from Ireland Under-20 squad member Giuseppe Coyne before landing a key penalty from UCC’s 10-metre line with eight minutes remaining.

Tony Smeeth’s youngsters, who overcame Clontarf in the last round, held on in a nail-biting finish to stay within reach of the top four. They trail Clontarf and Garryowen (36 points each) by four points, while the two hard-earned points they picked up the capital keeps UCC three points ahead of second-from-bottom Young Munster.

Trinity wore down the UCC defence for an opening 12th-minute try, scored by flanker Johnny McKeown who scrambled in under the posts. Number 10 Micheal O’Kennedy converted and also added the extras to a 16th minute score from lock Ryan Baird, another of their Ireland Under-20 representatives, who burrowed over from a close-in ruck for a 14-0 lead.

UCC’s attack clicked in the 22nd minute when centre Peter Sylvester was put through a gap on the right and he passed back inside for supporting scrum half John Poland to go over closer to the posts. Taylor converted and tagged on a penalty to reduce the arrears to four points, which is how it stood at the break as the sides swapped two more converted tries.

Trinity captain Colm Hogan picked his moment to step off his left and break in between two UCC forwards, shrugging off flanker Brian O’Mahony’s attempted tackle to run in a third converted try. The Corkmen answered back with a similar effort from Cian Bohane who brilliantly evaded two defenders and showed a clean pair of heels to his Ireland Students team-mate Hogan.

UCC turned the 21-17 deficit into a 22-21 lead courtesy of openside Cian Fitzgerald’s 53rd-minute touchdown. Promising loosehead Coyne rumbled over to provide Trinity’s reply on the hour mark. Fennelly converted and fired home that all-important penalty, and despite Sylvester slicing past two defenders for UCC’s bonus point try, converted by Taylor, it was Smeeth’s charges who were celebrating at the final whistle.