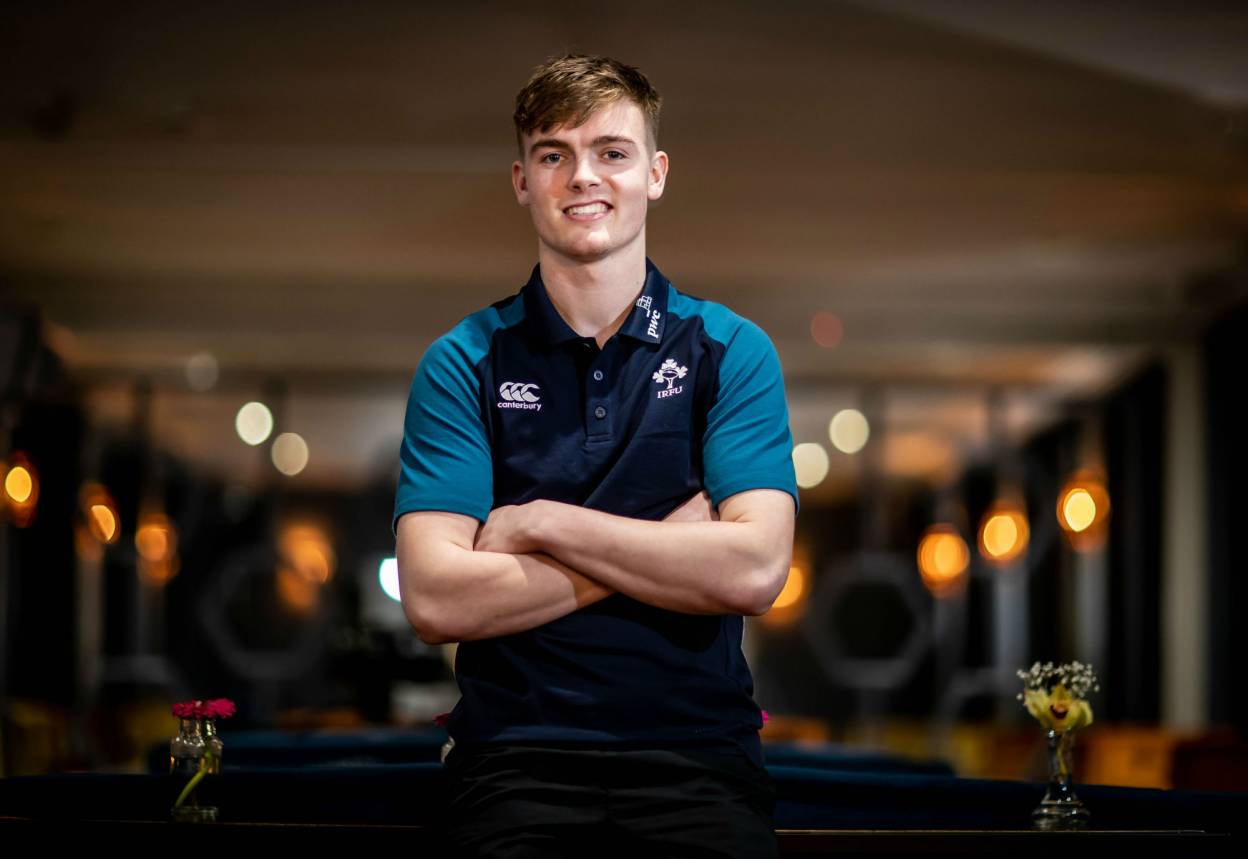 We hear from Shannon clubman Jake Flannery on his pathway to the Ireland Under-20s, playing in the All-Ireland League, the thrilling first round win over England in Cork and the challenge of the Under-20 Six Nations Championship.

He may be more known as an out-half, but for now the 19-year-old Flannery is happy with life at full-back in the Ireland U-20 set-up. One of their leading performers in the 35-27 bonus point success against the English, he is hoping for a similar result when they meet Scotland at Netherdale this Friday (kick-off 7.30pm).

“It’s something I’ve worked on for a few weeks now (playing full-back). It’s different but there are a lot of similarities. I get in at first receiver a good bit and the kicking (is similar). The other bits I’m just working on every day,” said the Tipperary-born youngster, speaking at the team hotel in Dublin this week.

Competition for the Ireland U-20 number 10 jersey is particularly fierce this season, with a number of players in the team and the extended squad capable of filling the shirt currently in the possession of Lansdowne and Leinster Academy star Harry Byrne, who kicked an important 15 points in the England game.

“To be honest, it’s not something I’m thinking about at the moment,” admitted Flannery. “I’m kinda taking it week-by-week and if my job for the team is to play out-half then I’ll do that to the best of my ability. But if they want me to play full-back, I’ll do that as well. There’s good competition at 10 between myself, Harry, Ben Healy, Bruce Houston and David Hawkshaw can even play 10.

“It’s good in training, we all drive each other and it pushes the standard. Going into the season, I was thinking I might be under pressure here but the lads are great. We bounce off each other and it’s a good environment and I’m learning from the lads every day.”

In much the same way that Byrne has benefited from his time in the All-Ireland League with Lansdowne, Flannery has also developed his game at fellow Division 1A club Shannon. He has featured heavily for the Limerick men on their return to the top flight, where he first got a taste for playing in a back-three.

“I played a few games for Shannon at full-back and really enjoyed that. The coaching staff there, between Tom Hayes and David O’Donovan, they are brilliant. Really good coaches and the amount I’ve learnt just from the last six months from playing with Shannon, it’s crazy to be honest.”

As an active student at the University of Limerick, Flannery has to achieve the right balance between college and sporting life. However, this is something that has become second nature to the Munster ‘A player, who gained a superb 625 points in his Leaving Certificate exams at Rockwell College last summer.

“In fairness to my Mam, she was always pretty good to make me get in and do a bit of study. It was always about getting a bit of balance between sport and the study, and the social side too. You have to get your balance,” he added.

“I’m in UL, studying chemical engineering. I’m enjoying it. I passed the first semester anyway and (am) really enjoying it so far. In Rockwell there’s a fairly tight schedule. We were going from school straight onto the pitch, straight in for food and straight into study. It’s easy to manage when it’s all laid out for you, to be honest.”