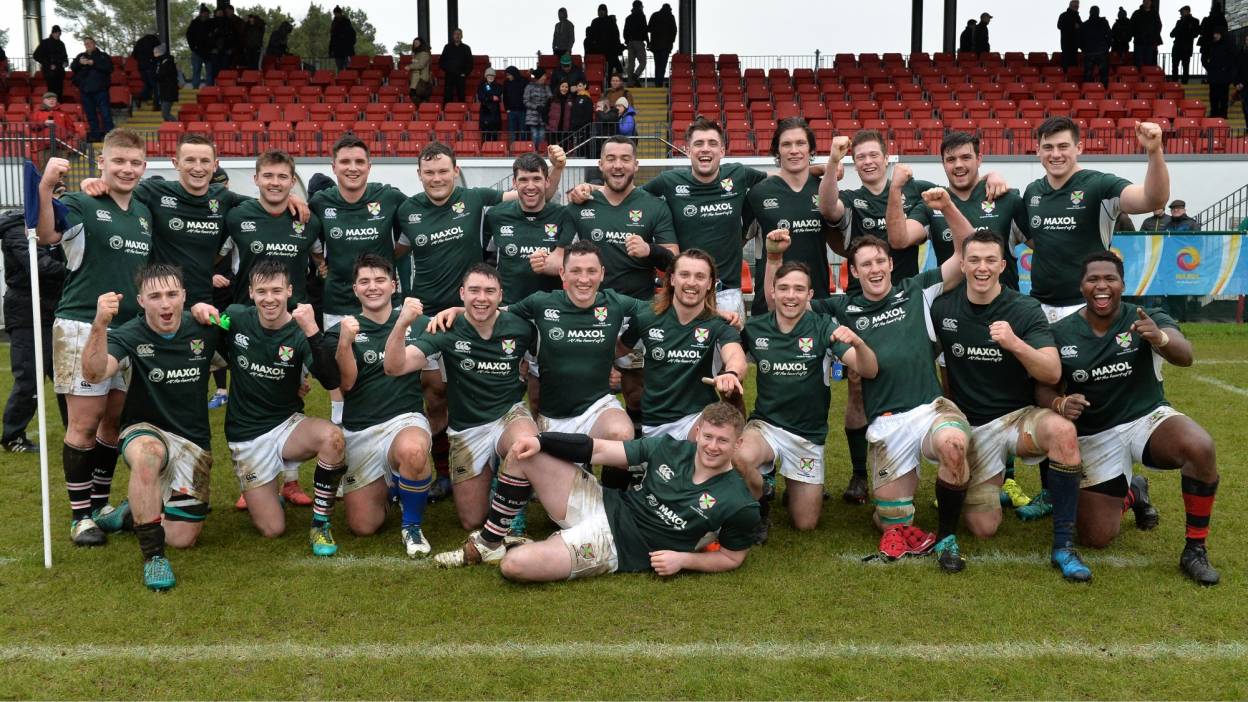 The Ireland Students team recorded an impressive 31-3 win over Scottish Students on Sunday with a five-try performance at Dub Lane, the home ground of Queen’s University RFC. Check out the match highlights from Irish Rugby TV.

Queen’s University hosted the Universities international fixtures as part of the Belfast club’s 150th year celebrations and fans were treated to a game of ambition, honesty of endeavour and running rugby.

The Scottish Students took a deserved lead with a well-struck penalty from out-half Kerr Stoddart after some disciplined defence had repelled the hosts’ advances. Replying with the opening try, Ireland captain Cian Bohane from UCC broke two tackles on the left wing to touch down, following up on carries from Dan Sheehan and Kelvin Brown.

Ireland led 7-3 at the break and went full tilt in the second half as conditions improved. With a playing surface capable of matching their ambitions, the free-running Irish side crossed for four more tries, all run in by members of their eager back-line.

There was a brace from IQ Rugby winger Finn Murphy, the first of them seeing the likes of Conall Boomer, Shane O’Hanlon and Kelvin Brown drive Ireland up close to the try-line before long passes from James Taylor and Cillian Burke played in Murphy to dive over near the left corner.

As their scrum dominance began to tell, Ireland threatened from a lineout maul before Rowan Osborne’s quick feet and hands to dummy a pass caught out Scotland’s Lewis Govenlock at the side of a ruck as the Dublin University scrum half sniped over for a well-taken 55th-minute try. Taylor converted for a 21-3 lead.

A try in the right corner from Rory O’Connor, the Buccaneers winger representing Garda College, brought the biggest cheer as he volleyed through a chip kick from UCC’s fast-breaking out-half Taylor and gleefully dived on the ball to score. It was a thrilling 60-metre move which originated from a lineout won by University of Ulster number 8 Boomer, the man-of-the-match.

Taylor was involved in Ireland’s fifth and final try when his short burst near the Scottish 22 took out two defenders, he offloaded to DCU lock JJ O’Dea who gobbled up further yards before looping a pass out to Murphy. The winger did the rest, sliding over in the left corner under pressure from Alex Ball’s last-ditch challenge.

“Some great rugby,” said Ireland Students head coach David O’Mahony after the game. “To be fair to the Scots, they contributed a huge amount to the game as well. I think our quality shone through in the end.”