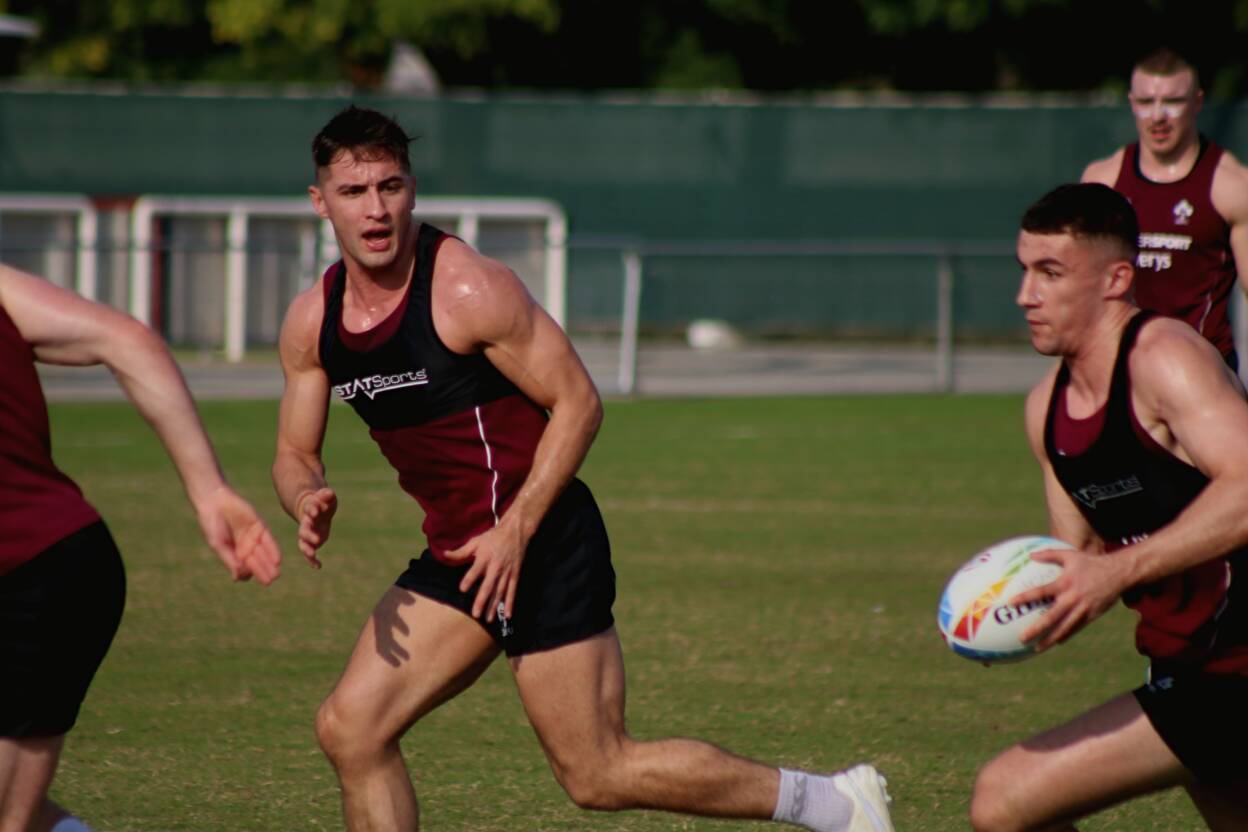 After arriving in Dubai late on Sunday night, the Ireland Men’s Sevens squad wasted little time in stepping up their preparations for the opening leg of the HSBC World Rugby Men’s Sevens Series as Anthony Eddy‘s side bid to hit the ground running this weekend.

Now just two days out from Ireland’s much-anticipated debut as a core team on the World Series and the start of the 2019/20 season, the players blew off any cobwebs from yesterday’s travel day with an intense pitch session at The Sevens Stadium as their tournament opener against USA on Thursday evening (6.12pm local time/2.12pm Irish time) edges closer.

It has been a long pre-season block for Eddy’s charges, who have been building towards this week since earning World Series qualification in Hong Kong last April, and three strong tournament performances in Chester, London and Elche have helped boost momentum and confidence heading into Dubai.

Winners of the Invitational Tournament here 12 months ago, Ireland have happy memories of lifting silverware in Dubai but the squad remain cognisant of the step-up required as a World Series core team and will be looking to bring ‘energy and enthusiasm’ to Thursday’s Pool B clash.

“The boys are a bit nervous but excited to be here,” Eddy, the IRFU Director of Women’s and Sevens Rugby, told IrishRugby.ie after Monday’s session.

“We’ve still got a few days until the tournament kicks off and I know they’re looking forward to it and they’ll be pretty keen to put in a good performance.”

With temperatures up around the 30 degree mark in Dubai, Ireland will spend the next couple of days acclimatising to conditions with three pitch hit-outs, while Tuesday morning’s gym session will ensure the players have overcome any effects of jet lag by the time the serious business starts.

“It’s really important and just to be out in the sun to get a little bit acclimatised to the heat they’ve got to play in,” Eddy continues.

“They’ve been here before, they sort of know what to expect and they usually perform pretty well in Dubai so I’m sure they’re excited about what’s ahead of them this weekend.

They only have one game on Thursday so there’s no reason why they shouldn’t come out with a lot of energy and enthusiasm so we’re really looking forward to it and I know the boys will be keen to put in a good performance and show they’ve earned the position they’re in.

After facing USA, Ireland will play Australia (11.58am local time/7.58am Irish time) and Scotland (5.50pm local time/1.50pm Irish time) in further pool outings on Friday as Billy Dardis and his team-mates bid to make an instant mark on the World Series.

“It will be [a special moment],” Eddy says of his side’s debut appearance.

“A number of players have been here since day one so you’ve got to take your hat off to them because they’ve worked so hard to be where they are and they’ve really put their best foot forward in every tournament they’ve played in and I know they’ll be keen to do the same this weekend.”