The Ireland Under-18 Schools team and their Scottish counterparts delighted the watching crowd with ten tries and 82 points in a hugely exciting encounter ©www.capturetheevent.com

The Ireland Under-18 Schools team suffered last-minute heartache as Scotland came from behind to snatch a 42-40 victory in the final play of an enthralling U-18 Six Nations Festival match at Kingsholm.

Smyth: It’s All About Pushing Them Through To The Next Level

Four tries looked enough to guide Peter Smyth’s talented young side to victory in the final round of the Easter tournament, but they were thwarted by the resolute Scotland U-18s who levelled the scores with their sixth try of the match before winger Harry Paterson’s crucial conversion sealed the win.

Showing ten personnel changes from their narrow midweek loss to England, Alex Kendellen and his team-mates produced an excellent first half display at the home of Gloucester Rugby and their 20-14 interval lead failed to do them justice. Classy CBC Cork centre Harry O’Riordan started and finished a free-flowing opening try. 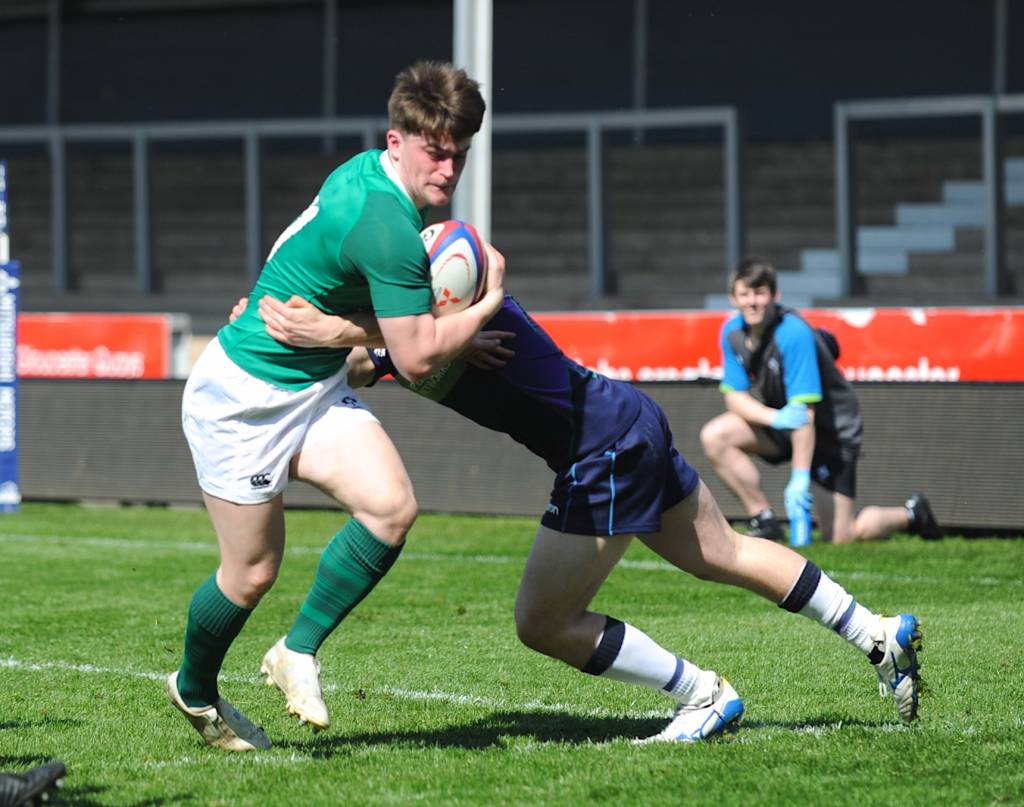 St. Michael’s starlet Chris Cosgrave broke from halfway courtesy of O’Riordan’s well-timed pass on 11 minutes, linking with supporting scrum half Ben Murphy who brilliantly spun out of a tackle from his opposite number Cameron Scott and fed the onrushing O’Riordan who crashed over near the posts. Cosgrave tapped over the simple conversion.

Ireland’s pacy full-back was to be one of the game’s star turns and he duly slotted over a brace of penalties to keep Ireland ahead, while their opponents hit back with a converted catch-and-drive effort from skipper Scott Clelland.

Just after the half hour mark, Smyth’s youngsters bagged their second try to go 20-7 in front. Good work by the backs out wide – O’Riordan made the initial break and Diarmuid Kilcommins and Karl Martin kept the move going – was finished off by the pack down the middle with Belvedere College’s Alex Soroka, an impressive performer an ever-present second row, muscling over the line following Tom Stewart’s strong clear-out.

However, there was to be a twist just before half-time when Matt Currie’s great line opened up the defence and he fed his centre partner Scott King to score beneath the posts, Paterson’s straightforward conversion reducing the arrears to 20-14. That try seemed to lift the Scottish going into the second period which proved a far more even contest with the lead regularly changing hands. 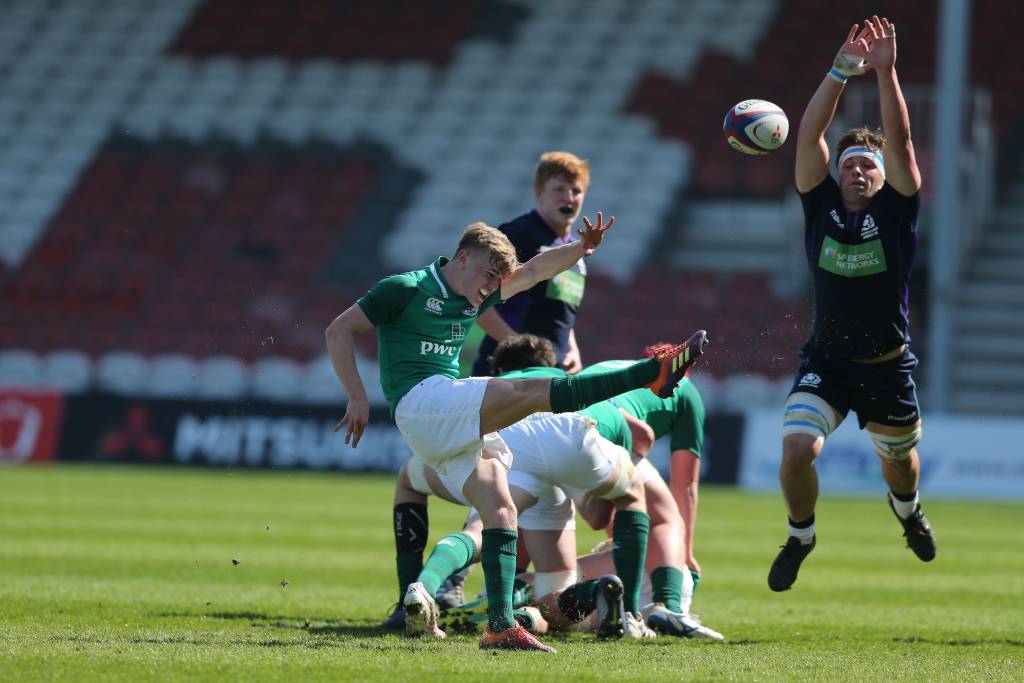 Leicester Tigers back rower Ben Muncaster scored a converted effort for them nine minutes after the break only for O’Riordan to claim his second try of the game five minutes later, expertly handing off two defenders to score on the right after a clearance kick had been charged down. Sharpshooter Cosgrave was again successful with the extras for a 27-21 advantage.

The powerful Muncaster then joined O’Riordan on two tries, which was again converted by the unerring Paterson. Back came Ireland in the hot midday conditions, Ulster U-19 out-half Nathan Doak kicking a drop goal to reclaimed the lead and Cosgrave following up with a magnificant penalty from inside his own half.

The drama continued when winger Cameron Furley ran in from halfway after intercepting a Doak pass out wide, Paterson’s conversion edging the Scots into a 35-33 lead. The back-and-forth action, which saw both sides going for it and backing their skills, made it arguably the best contest of the festival and a great advertisement for U-18 international rugby.

With five minutes remaining, Smyth’s charges looked to have secured the win when replacements Reuben Crothers, Oisin McCormack and Conor McKee combined to slice through with the latter dotting down via McCormack’s drawing of the full-back and a nice final pass. Cosgrave converted to take his handsome festival haul to 33 points. 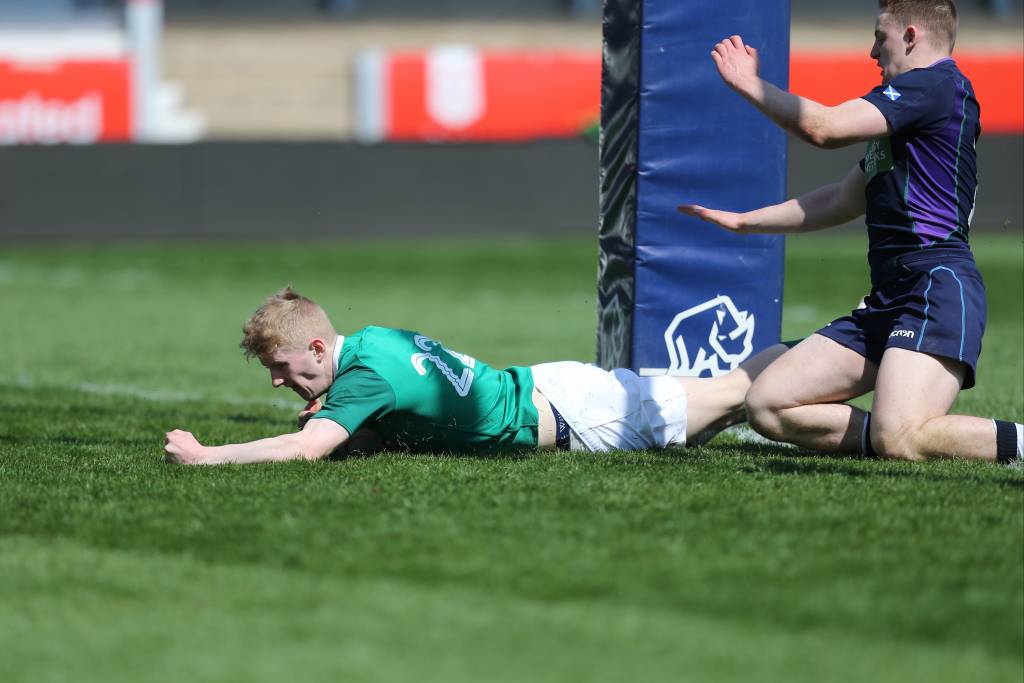 That should have been it but late Scotland pressure prompted a yellow card for Wallace High School’s Crothers. From another catch-and-drive move, the ball was worked to the wing for replacement Finlay Callaghan to dive in and Paterson to break Irish hearts with his decisive kick.