CBC Cork out-half Cian Whooley makes a break during the Ireland U-18 Schools team's second round meeting with England in Worcester ©www.capturetheevent.com

For the second successive game at the Under-18 Six Nations Festival, the Ireland U-18 Schools team fell agonisingly short as they were edged out 24-17 by a powerful England side at Sixways Stadium.

Smyth Seeks ‘Another Positive Performance’ From Promising Under-18 Crop

Converted tries from Coleraine Grammar School prop Oscar Egan and back rower Oisin McCormack from Garbally College kept them in touch throughout this keenly-contested Worcester clash, but they were unable to turn late pressure into points despite another strong collective finish.

Head coach Peter Smyth made ten personnel changes to the team that went down 29-24 to France in the first round, and the new additions certainly seemed to make a difference with an improved start against the tournament hosts who had run out 38-20 winners over Wales in their opening match. 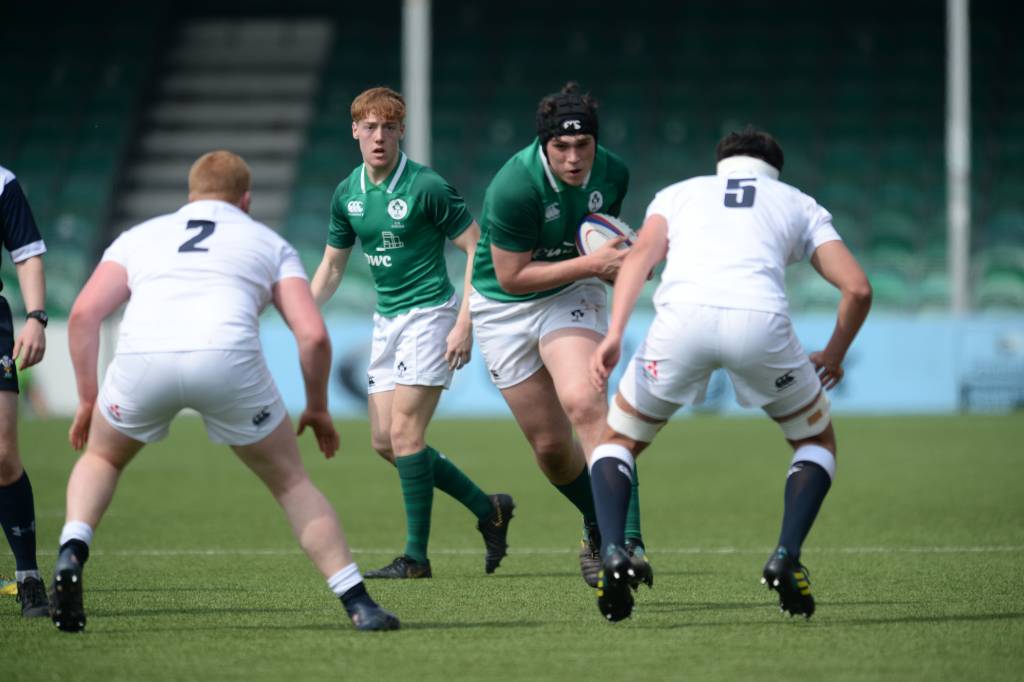 CBC Cork’s Cian Whooley orchestrated things from out-half and the new centre pairing of Shane Jennings, the Galway minor hurler, and Ben Carson showed great strength as they looked to pummel their way through. And against a strong England pack, it needed an excellent display from number 8 and captain Alex Kendellen to keep his forwards together.

Bath prospect Orlando Bailey kicked an early penalty for England to hand them a sixth-minute lead but this was cancelled out on the quarter hour mark when full-back Chris Cosgrave split the posts from 25 metres out, taking his festival tally to 12 points.

Moments later, a brilliant chip-and-catch from Whooley almost led to the game’s opening try for Jamie Osborne only for the Naas CBS winger to get swallowed up just short of the try-line. At the other end, Cosgrave did really well to snuff out the danger after England scrum half Raphael Quirke had kicked ahead.

It was the Jim Mallinder-coached hosts who chalked up the opening try on 25 minutes when a loose pass out wide saw speedster Jude Williams collect the ball on halfway and after an inch-perfect kick ahead, he just beat Whooley to the chase to score in the corner. Bailey landed the extras for the 10-3 lead. 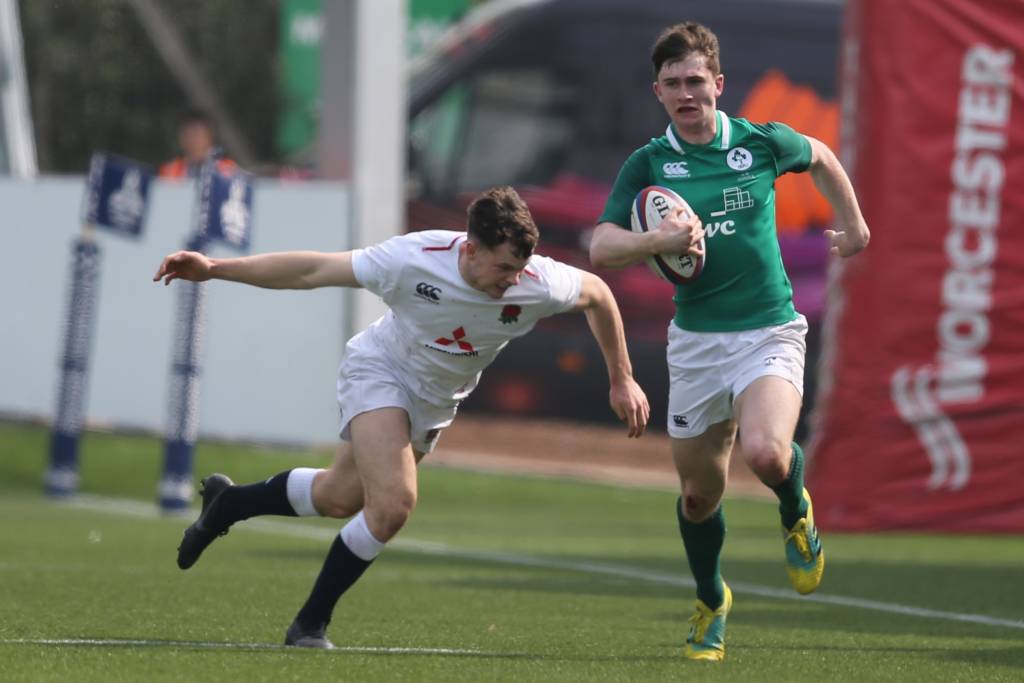 Ireland’s opener came on the half hour when pressure from the pack with a series of pick-and-drives was rewarded by Egan’s try, the tighthead stretching an arm out over the line. Cosgrave’s conversion tied things up, but only briefly as just a few minutes later some neat passing released Wasps clubman Williams to take advantage of space out wide and complete his brace.

Trailing 17-10 at the turnaround, the Ireland Schools outfit endured a disappointing start to the second period as they allowed bustling centre Phil Cokanasiga to burst clean through from a ruck and power over to the right of the posts. The try stood despite doubts over whether he had picked up the ball from an offside position.

Bailey’s conversion completed England’s points haul for the afternoon, and from then on it was a case of relentless Irish pressure from the pack. They kept plugging away despite a couple of key decisions going against them with two ‘tries’ being ruled out by the match officials, led by Welsh referee Andrew Moule. 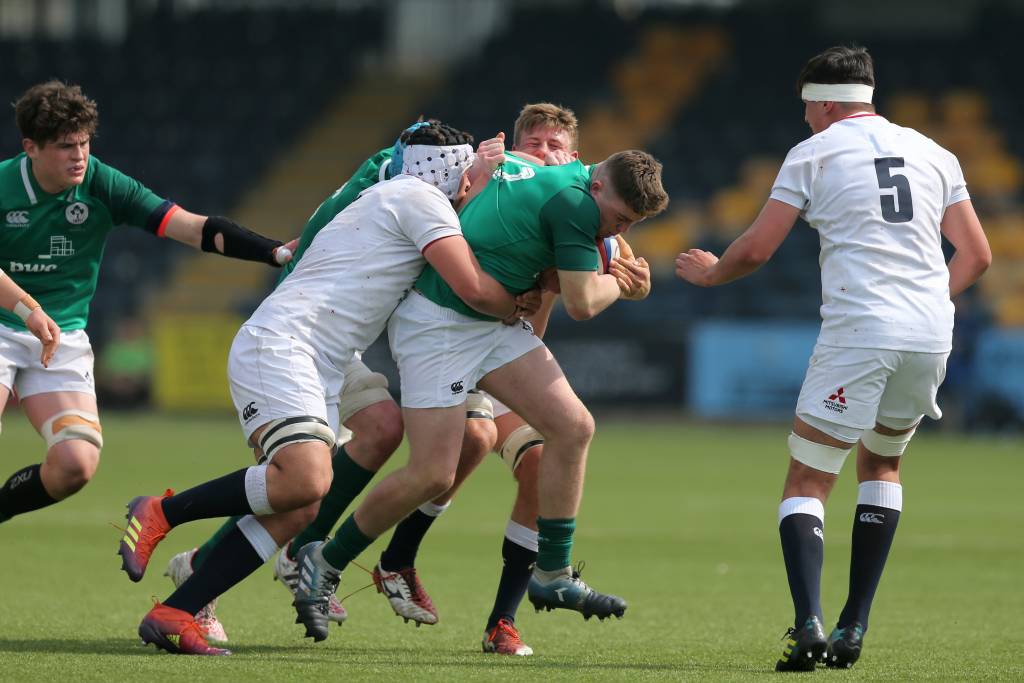 A yellow card for England second row Archie Benson helped Ireland’s cause and McCormack took a great line to collect replacement Ben Murphy’s sharp pass and thunder over for a deserved 55th-minute try, Cosgrave with the conversion again to restore the seven-point deficit.

But for all their pressure in the closing stages, Ireland were thwarted by some gutsy English defence which forced a last-gasp spill as Smyth’s charges looked to strike from a close-in lineout. They will finish out their campaign on Easter Sunday against Scotland, looking to break their festival duck at Gloucester’s Kingsholm ground (kick-off 11.10am).