Ireland were unable to repeat last week’s high-octane performance as Japan bounced back impressively to draw the historic series with a 29-10 second Test win in Tokyo.

Greg McWilliams’ side could not build on Natasja Behan’s well-taken third-minute try, with a high Irish error count and a robust Japanese defence making for a much tighter contest.

The hosts had long spells of pressure near Ireland’s try-line, resulting in tries from Ayasa Otsuka and excellent full-back Rinka Matsuda as they took a 12-5 lead by half-time.

Operating at a faster pace with their passes sticking, Japan were looking sharper in a number of areas as Ireland appeared to tire in the humid conditions. The visitors’ lineout struggles and indiscipline made for a frustrating night. 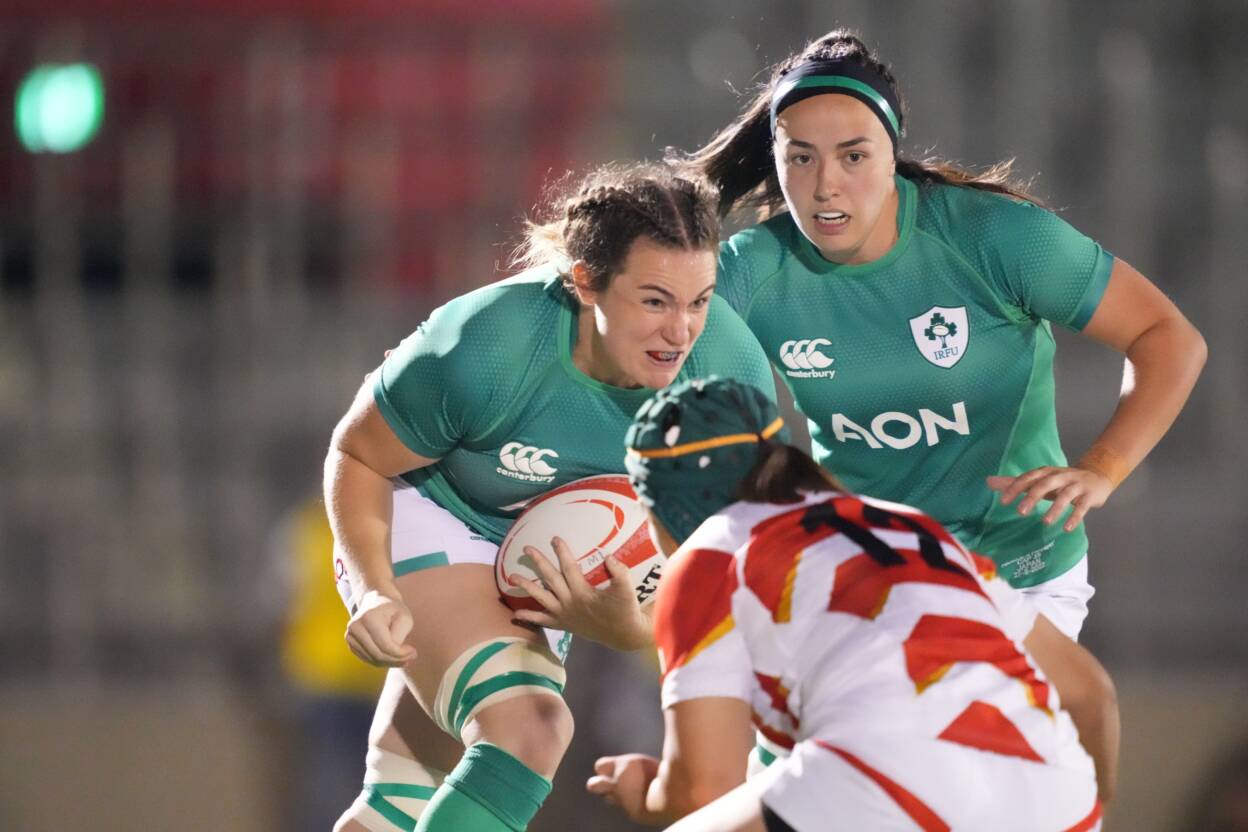 The Sakura Fifteen tightened their grip on the game with tries out wide from Hinano Nagura and Matsuda, the latter showing her pace off the mark and strength to break past both Behan and Méabh Deely.

Replacement Katie O’Dwyer replied on the hour mark from a lineout maul, but Sachiko Kato answered back with a quarter of an hour remaining to settle the issue, giving Japan some winning momentum to take into the Rugby World Cup.

Despite tonight’s disappointing conclusion, Ireland can reflect on a positive few weeks together. Jo Brown (pictured above), Jess Keating and Emma Tilly took the number of new caps on tour to nine, while the wider group will be all the better for the touring experience. 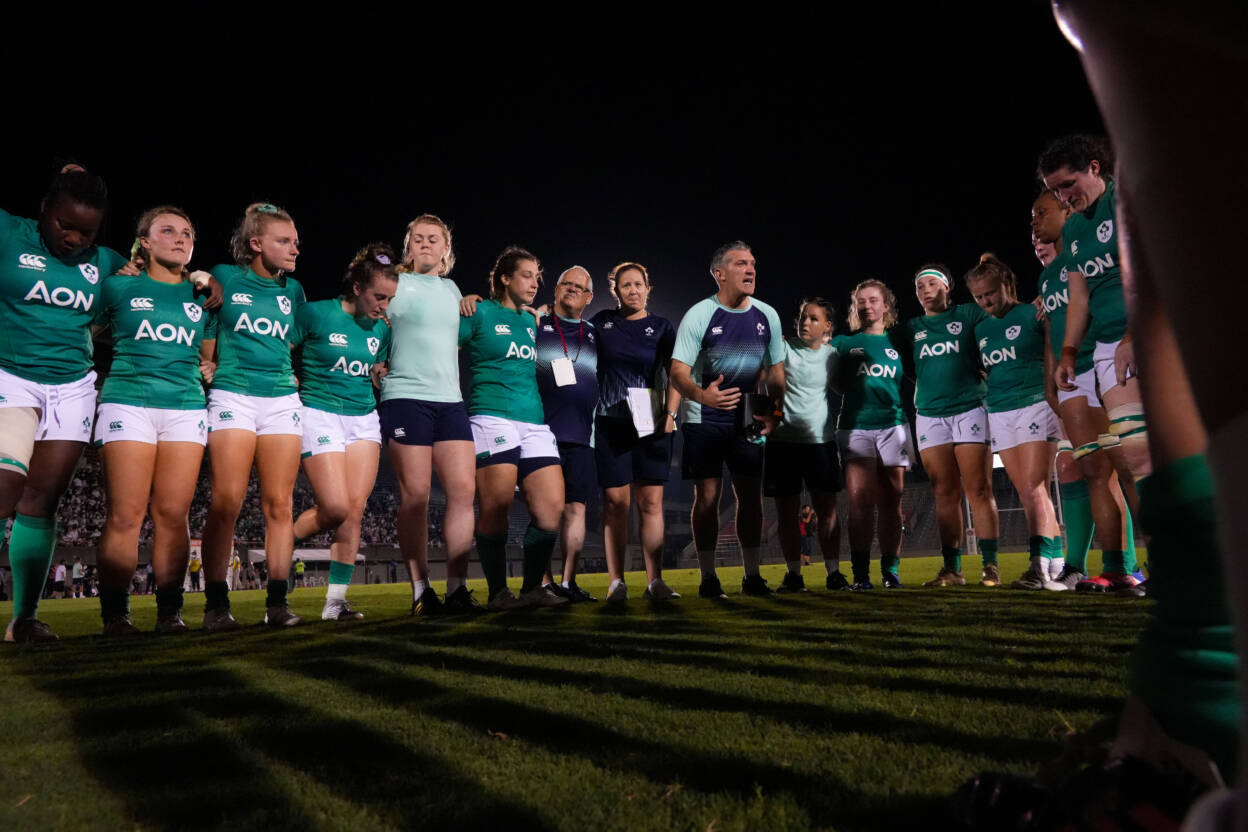 They will take plenty of valuable lessons forward into the TikTok Women’s Six Nations, as McWilliams acknowledged afterwards: “It’s a really good learning for us. We’ve talked to the players, we just have to separate the emotion and the process.

“You’re always disappointed (to lose). We didn’t fire any shots. We couldn’t get a foothold in the game, but there is a bigger picture. We capped nine new players across the series, we checked our depth.

“The more we can train with these players, the professionalism is going to help, our players will be more conditioned to go that second week. Massive learning, really proud of the players.

“To see how much the squad has grown in the last four or five weeks, it gives you real hope for where they’re going to go to as a group. I can genuinely say that this group are a special group that are only going to get better.”

Ireland continued where they left off in Shizuoka, scoring inside the opening minutes. Dannah O’Brien’s 50:22 kick set up the opportunity, Ailsa Hughes duly broke to the right of a maul and passed for Behan, on her second start, to finish forcefully past Megumi Abe. 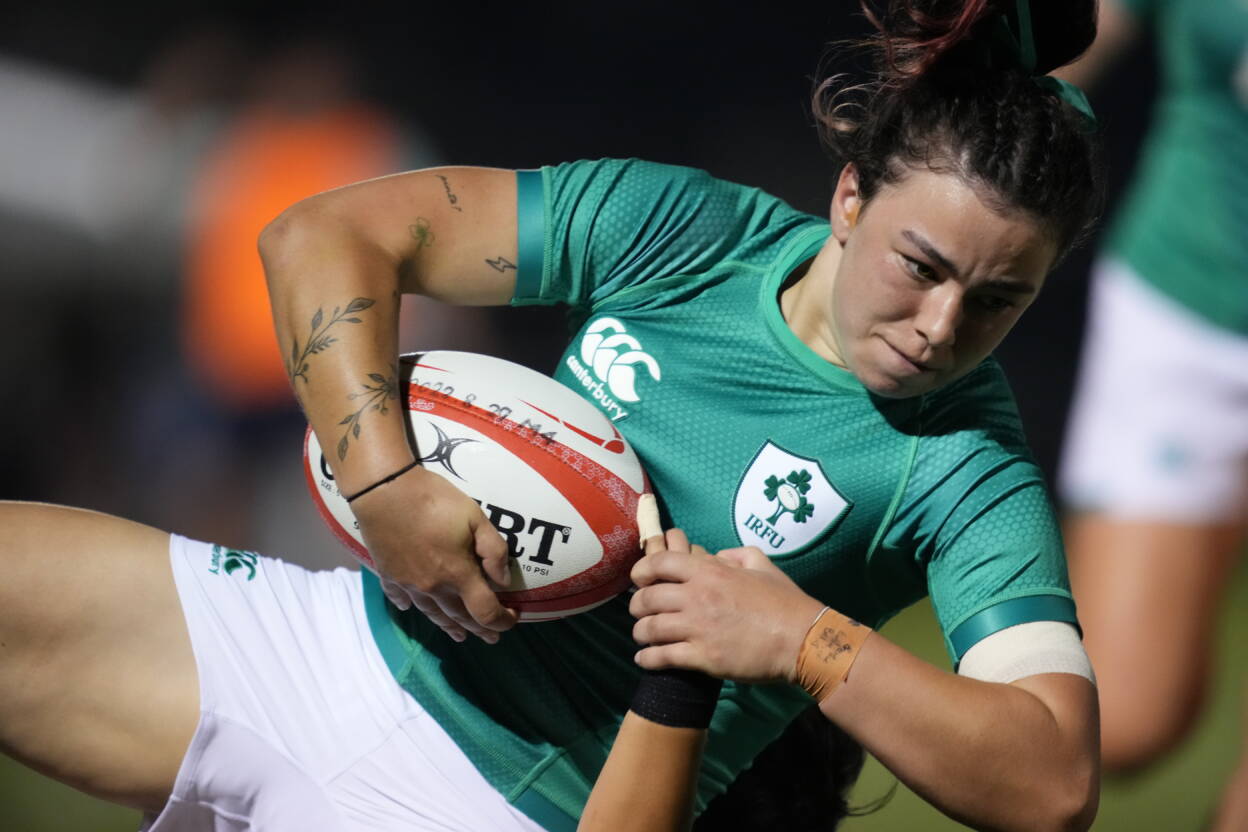 Following O’Brien’s conversion which went narrowly wide, Grace Moore provided impact with a lineout steal and a muscular tackle. Yet, as the opening quarter developed, Japan got on top.

The home pack went close on a number of occasions off set-piece ball, and despite Hannah O’Connor forcing a turnover and captain Nichola Fryday stealing a lineout, Ireland were whistled up for successive offsides in their eagerness to defend their line.

Japan drew level in the 16th minute, the livewire Abe turning scrappy scrum possession into a try as her inviting pass put her half-back partner Otsuka through a gap to score to the right of the posts.

Otsuka’s conversion came back off the far post, and although Ireland began the second quarter with a promising forwards-led assault deep inside the opposition 22, Japan held out and earned a relieving penalty. 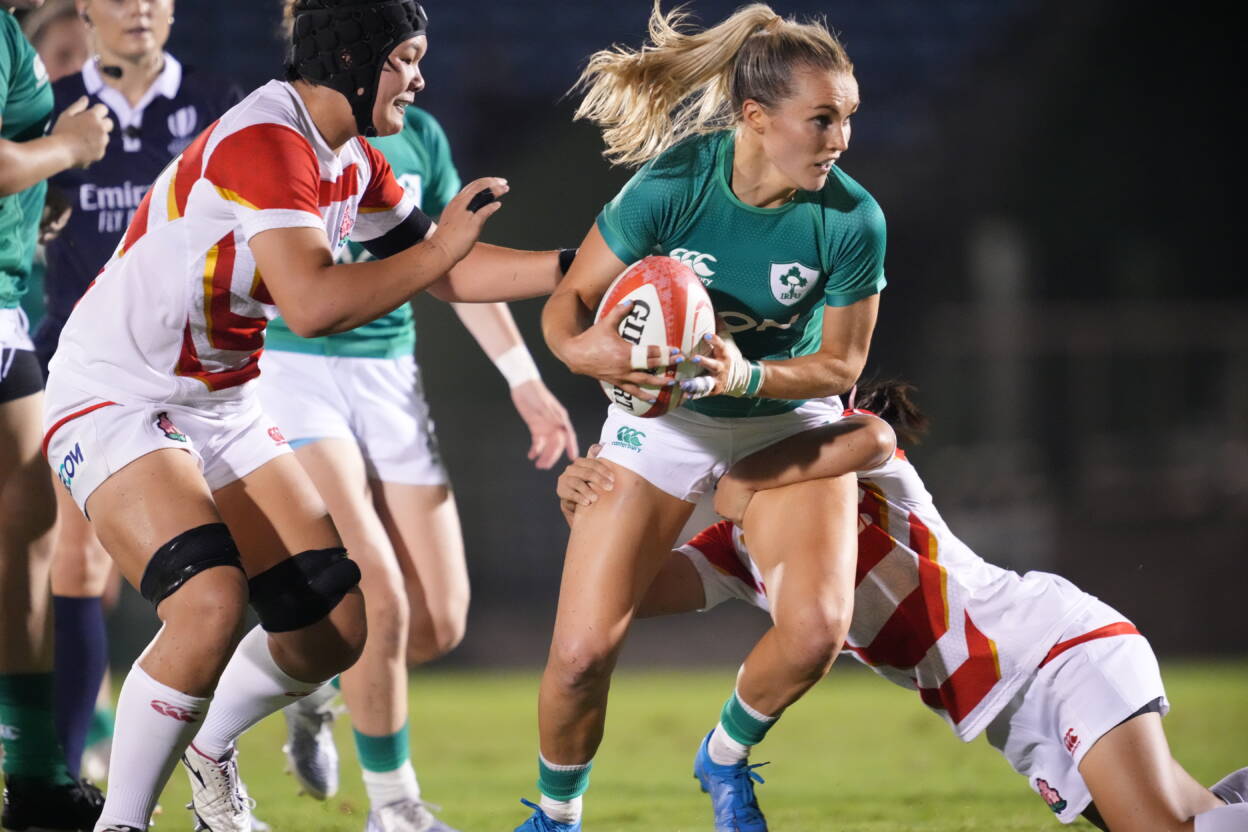 The girls in green missed the physicality of injured forwards Sam Monaghan, Christy Haney and Dorothy Wall, and Japan were showing a marked improvement around the contact area and in contesting the breakdown.

A worryingly inconsistent Irish lineout, coupled with some subsequent penalties, allowed Japan to press on the half-hour mark. A crisply-executed backs move off a scrum saw Matsuda released and she bounced off Edel McMahon’s attempted tackle to score.

Her 34th-minute effort was converted by Otsuka, and 12-5 is how it stayed up to the break with Japan successfully defending an Irish maul and then winning the breakdown battle after Méabh Deely was tackled just a couple of metres out.

Ireland conceded 11 first half penalties and they continued to fall foul of referee Lauren Jenner’s whistle on the resumption, allied to Behan being stripped of the ball in a tackle.

Aoife Dalton lifted her team-mates with a well-won turnover penalty, only for Japan to threaten again soon after. Otsuka’s clever dummy and break threatened a try and it took an important cover tackle from Hughes to foil the attack. 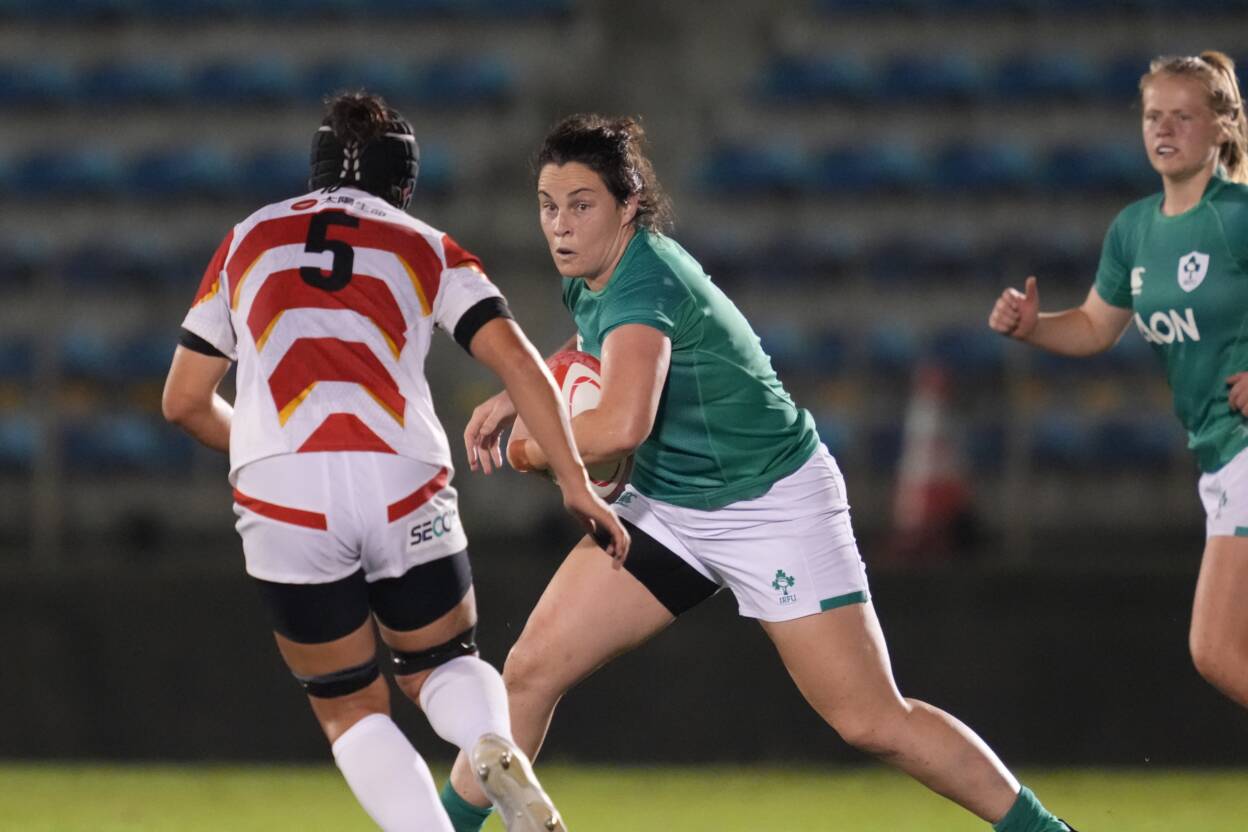 However, Japan’s industrious work in retaining possession and chipping away closer to the line ended with Otsuka’s skip pass putting winger Nagura over on the right in the 49th minute.

Just six minutes later, 17-5 became 22-5. Ireland were a little too predictable at times, Japan’s well-organised defence forcing mistakes as Fryday knocked on in midfield and the possession led to a superb solo try.

Gobbling up a long bouncing pass, Matsuda swatted away Behan on the Irish 10-metre line. She tore up the left wing towards the Irish 22 and shrugged off Deely too as she brilliantly completed her brace.

Ireland’s response was encouraging, Neve Jones going close after being fed by McMahon down the short side of a maul. They went for the corner from another penalty before O’Dwyer drove over with good support from Brown and Moore.

O’Brien missed the chance to draw Ireland closer, sliding her conversion wide from the right. A Jones lineout throw that went awry was another dent to their comeback bid.

Indeed, it was Japan who scored next. From a scrum free-kick, they carried smartly and with a good deal of power and guile. Kato neatly put Iroha Nagata charging through a gap before crashing over herself for a try from the resulting ruck.

Otsuka turned it in a seven-pointer, effectively sealing Japan’s first ever Test victory over Ireland. Seina Saito became her country’s most-capped Women’s player on the night, and it took a strong tackle from Chloe Pearse to hold her up behind the Irish posts. 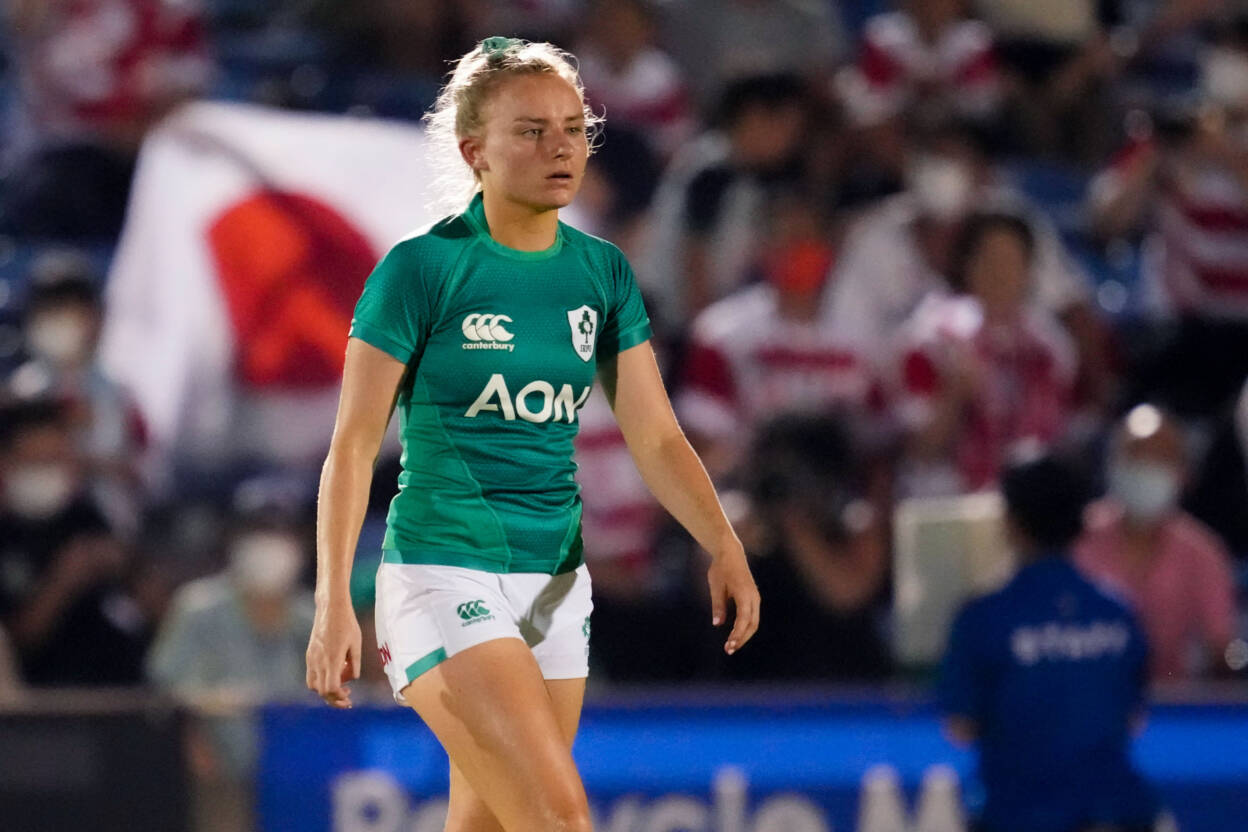 Pearse was the best of Ireland’s replacements, Keating and Tilly (pictured above) both go on during the closing stages and there were second appearances in the space of a week for Taryn Schutzler and Leah Tarpey.

Japan were very deserving winners, though, with tireless openside Nagata gaining a turnover penalty after Schutzler was brought to ground. Replacement Kyoko Hosokawa made an eye-catching break too, ensuring the hosts ended the second Test in Irish territory.