Ireland Under-18 Schools team captain Alex Kendellen makes a carry during their first round clash with France in Gloucester ©www.capturetheevent.com

The Ireland Under-18 Schools team got their U-18 Six Nations Festival campaign off to a solid start performance-wise with a strong second half fight-back against France. Their comeback fell just short in the end as they lost out 29-24 at Hartpury College in Gloucester.

The fast-starting France Under-18s showed the benefit of their three warm-up games against Wales, England and Italy last month – at a time when Ireland’s various Schools Cup competitions were coming to a climax – as they hit the ground running and had four tries on the board to lead 22-7 at half-time.

However, through the trusty boot of St. Michael’s College full-back Chris Cosgrave and some powerful work by the forwards, the Ireland Schools side hit back with three second half tries to give themselves some decent momentum to take into Wednesday’s second round clash with tournament hosts England.

Head coach Peter Smyth was forced into a trio of late changes as centre Harry O’Riordan, scrum half Ben Murphy and prop Mark Donnelly were brought into the starting XV for Ben Carson, Conor McKee and Oscar Egan respectively. Coleraine Grammar School prop Egan was the only one of the three fit enough for bench duty. 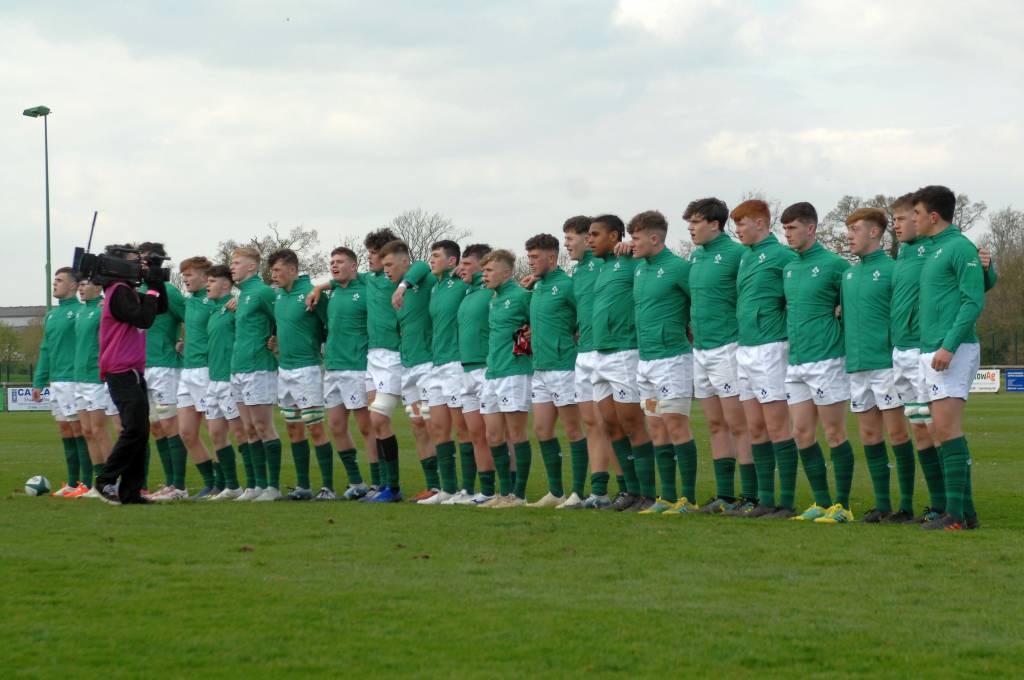 Early nerves were evident for Ireland but they looked well organised in defence, O’Riordan driving French full-back Alexandre Borie back a few metres in a tackle and Jamie Osborne marking a chip over the top, while the forwards were efficient in making their tackles and bouncing up for more.

However, France were rewarded for a cohesive fourth-minute attack when out-half Gabin Michet’s inviting pass found Borie, just ahead of the defending Aaron Leahy, and he was able to finish from close range past Nathan Doak and Cosgrave. The wind affected Nolan Legarrec’s conversion, the ball falling off the tee twice before his drop-kicked effort was blocked.

Ireland were unable to make full use of a lineout steal by Belvedere College’s Alex Soroka, and the French youngsters, captained by former Ireland international Trevor Brennan’s son Josh, extended their lead to 12-0 in the 10th minute. Michet’s chip over the top produced a 50-50 ball which back rower Matthias Haddad-Victor claimed in the air and he crashed in under the posts, evading both captain Alex Kendellen and Cosgrave.

After scrum half Legarrec split the posts from straight in front, Ireland began to make headway via Murphy’s crisp passes from ruck to ruck. With Soroka impressing in the lineout, they had a solid platform and forced a series of penalties but Doak unfortunately dropped Murphy’s pass from a five-metre scrum and France hacked downfield.

Smyth’s charges quickly got back into try-scoring range, lovely hands from Doak and O’Riordan releasing big Boyne centre Karl Martin and his kick chase resulted in Borie conceding a lineout. France were then guilty of straying offside and PBC Cork’s Kendellen grasped his chance to take a quick tap and force his way over for a galvanising try.

Cosgrave’s impressive conversion, given the windy conditions, cut the gap to five points, but France hit back with two unconverted tries in the lead up to the interval. The first of them arrived in the 24th minute, a defensive lapse at a midfield ruck allowing Legarrec to spearhead a break back into the Irish 22, and Michet passed wide for Simon Desert who slipped the ball back inside for lock Thomas Ployet to plunge over and score. 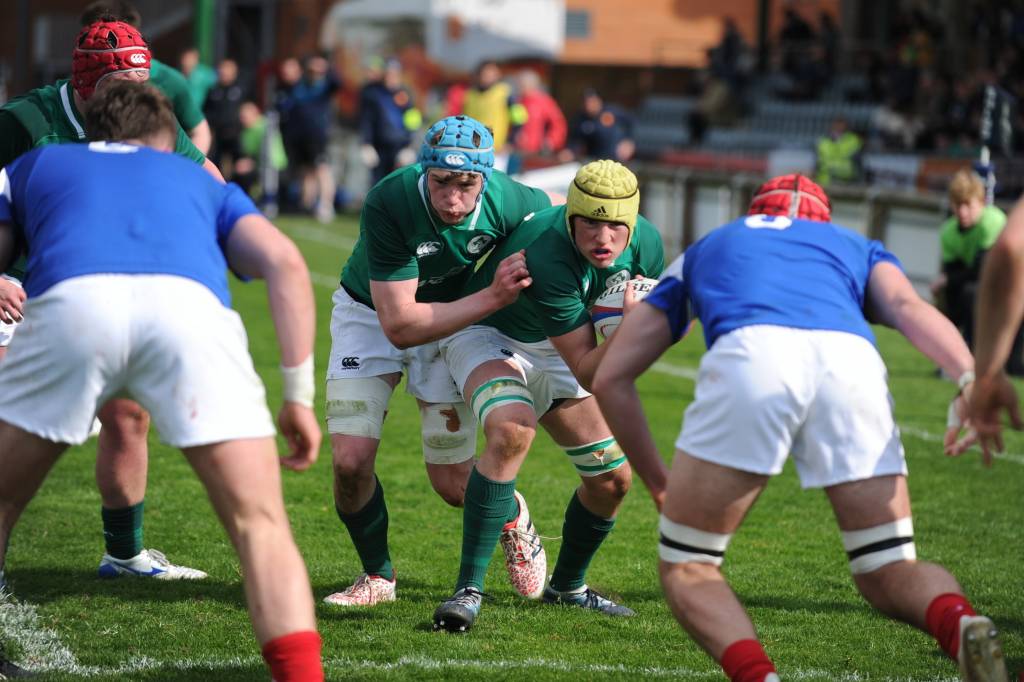 Haddad-Victor completed his brace by the half hour mark, burrowing over from just a couple of metres out with big prop Paul Mallez on the latch. Loosehead Jack Boyle from St. Michael’s caught the eye with a turnover and a muscular carry, although the defences cancelled each other during the remainder of the first half.

Ireland emerged the better team on the resumption, though, as Murphy and Cosgrave kicked well to pin France back. Number 8 Kendellen got over the ball to force a penalty from Haddad-Victor for holding on, and Cosgrave’s reliable right boot split the posts with 38 minutes on the clock.

Les Bleuets upped the ante in attack again, Borie running back Kendellen’s kick with interest as he broke a tackle and gathered his own chip but two crucial tackles by Cosgrave and Soroka stopped him just short of the try-line. Nonetheless, the resulting scrum launched an 8-9 move and set up Legarrec to dummy and cross the whitewash, widening the gap to 29-10.

Ireland showed their resilience as Kendellen was held up in the left corner before a Soroka carry led to a penalty in front of the posts. Another infringement by Haddad-Victor saw him sin-binned in the 50th minute, and shortly afterwards, the green-clad pack powered over from a lineout maul on the right with Belfast Royal Academy hooker Tom Stewart, one of the returning players from last year’s festival, grounding the ball. 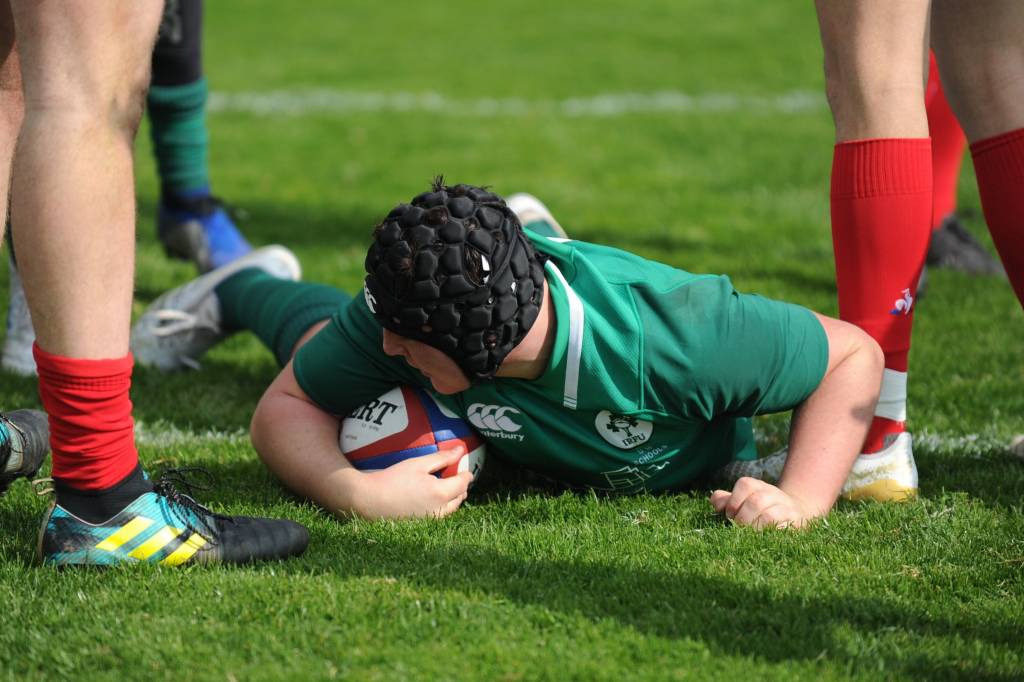 Cosgrave’s well-struck conversion reduced the arrears to 29-17 and Ireland were looking lively despite the scoreboard being against them. Once again they pushed up-field for points, centre O’Riordan doing the hard work in breaking the defensive line but neglecting to pass to Osborne on his outside when he could have put the winger away.

Naas CBS’ Osborne was growing in influence, picked out by Doak and deftly releasing Cosgrave for a possible try but the covering Alfred Parisien did just enough to deny him. Back-to-back penalties kept Ireland pressing in the right areas of the pitch, combined with Darragh Murray and Soroka’s clean takes from replacement Lee Barron’s lineout throws.

With five minutes remaining, some lovely passing from Doak, O’Riordan and Cosgrave led to a slick break out wide and Martin’s final pass put Osborne crashing over in the right corner past a couple of last-ditch challenges. Cosgrave nailed an excellent conversion from near the touchline to make it a five-point game.

Unfortunately, Smyth’s youngsters ran out of time despite getting the ball back on a couple of occasions late on. There were also opening day wins for England (38-20 against Wales) and Italy (19-18 against Scotland). The festival moves on to Worcester’s Sixways Stadium with Ireland facing England at 1.40pm on Wednesday (live on Free Sports – channel 429 on Sky in Ireland).