A late try from captain Alex Kendellen closed out a business-like 40-12 bonus point victory for the Ireland Under-20s, sponsored by PwC, as they swept Wales aside at Cardiff Arms Park.

Richie Murphy’s charges, who were 38-7 winners over Scotland on the opening day, kept hold of top spot in the Under-20 Six Nations table with a strong five-try showing.

Doak marked his U-20 debut with a player-of-the-match performance, the Ulster prospect’s snappily-taken 41st-minute try the highlight of a 20-point individual haul.

Although Wales clawed it back to 25-12 – with both sides suffering yellow cards – it was Ireland who finished the stronger, replacement Daniel Okeke securing the bonus point before Kendellen had the final say.

With second-placed England also winning their first two fixtures in Cardiff, it sets up a mouth-watering Ireland-England duel at the same venue next Thursday (kick-off 8pm). 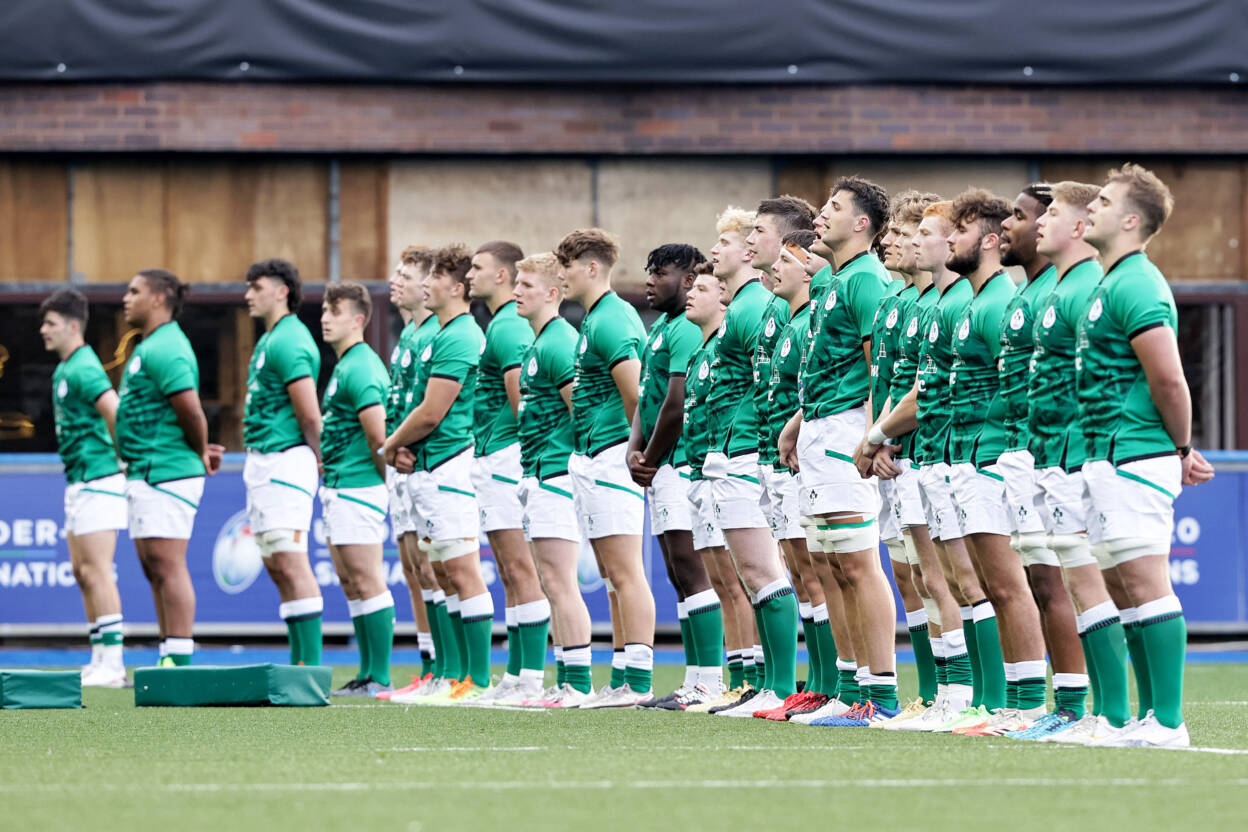 The table-toppers established an early territorial dominance against Wales, benefiting from new half-backs Doak and Tim Corkery’s crisp deliveries. Busy centre Forde took them to within five metres out.

The Welsh held out thanks to a lineout steal and then Harri Deaves held up a try-seeking Alex Soroka under a pile of bodies. Number 8 Kendellen was also thwarted from a quick tap penalty.

However, the pressure eventually told in the 13th minute, Forde taking a short line off a scrum as Doak’s inviting pass sent him crashing in under the posts past two defenders. Doak converted. 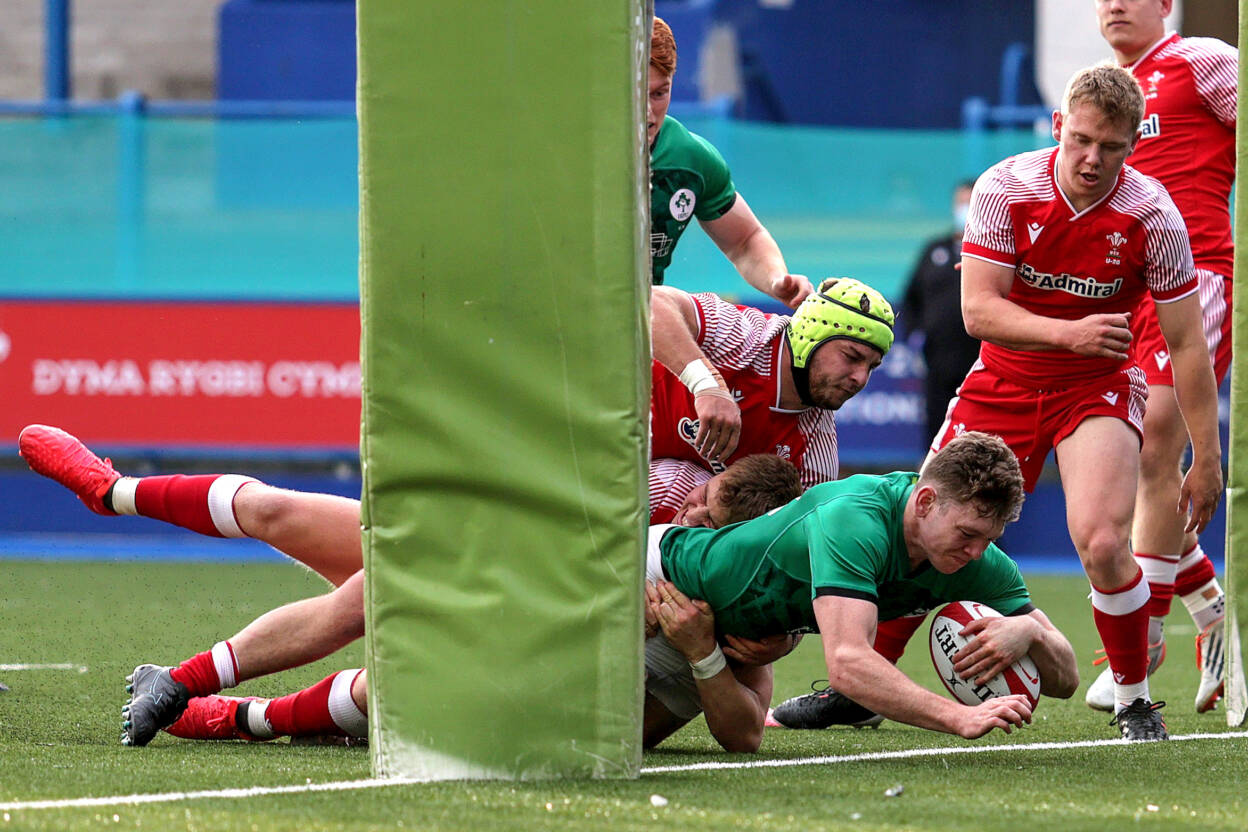 In response Sam Costelow missed a penalty from far out, as French referee Tual Trainini tried to control a ferocious battle at the breakdown and two fast and fully-committed defences.

Looking the better team in possession, Ireland extended their lead with a superb second try, which started with a dummy and break by the versatile Soroka.

Donnacha Byrne was up in support, and with a penalty advantage, Jack Boyle carried strongly before Jamie Osborne’s excellent delayed pass had winger Cosgrave weaving in on a lovely line straight to the posts. 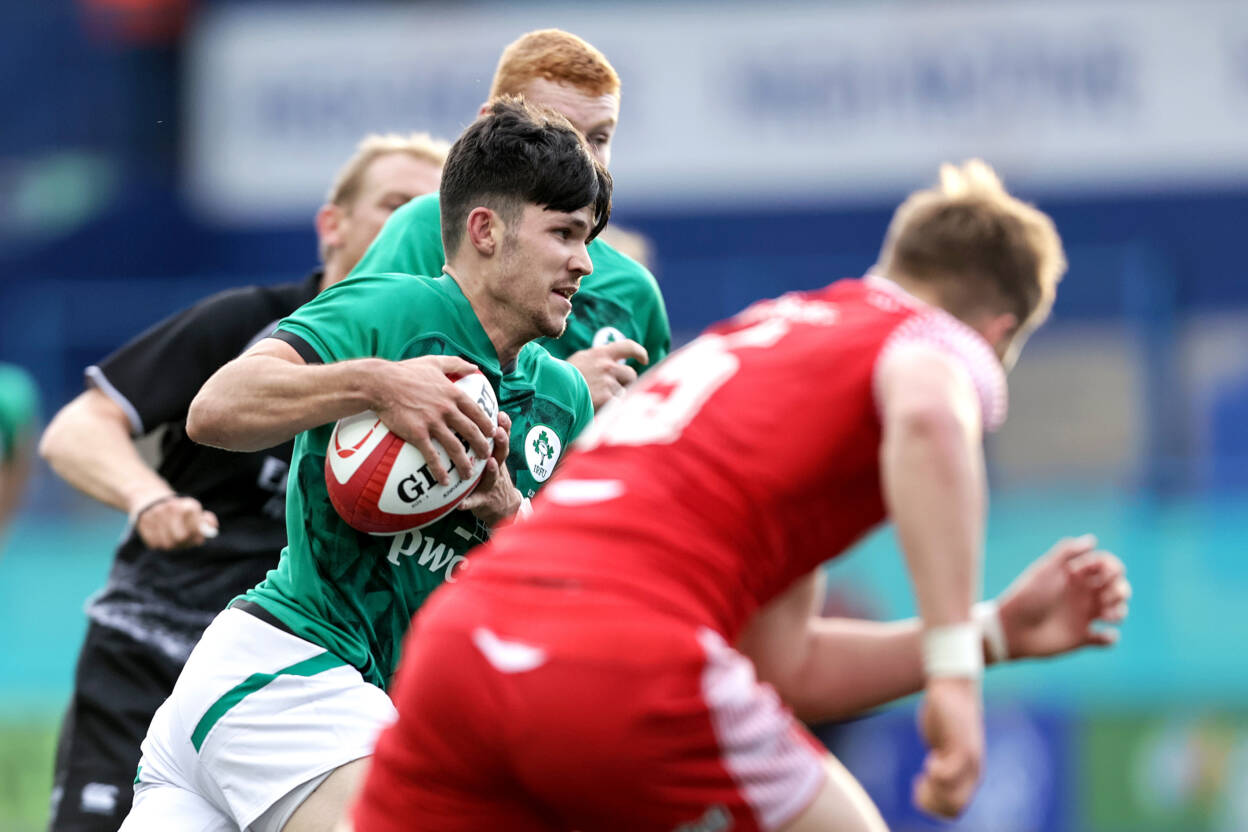 Doak converted before tagging on a penalty on the half-hour mark, punishing openside Deaves for an offside. The hosts hit back with a promising spell until Kendellen earned a turnover penalty in his own 22.

Ben Moxham flooded through off his right wing on a surging run into the Welsh 22, yet Ireland could not capitalise on this occasion as Wales kept the deficit at 17 points just before the interval.

Doak showed his class with a fine five-pointer to start the second half, fielding a kick, dashing along the left touchline past his opposite number Harri Williams and taking a return pass from Osborne to go over in the corner.

Wales were quick to respond, showing better variety in attack as a clever kick led to Moxham conceding a five-metre scrum. Their pack’s pick-and-goes paved the way for skipper Alex Mann to go over. 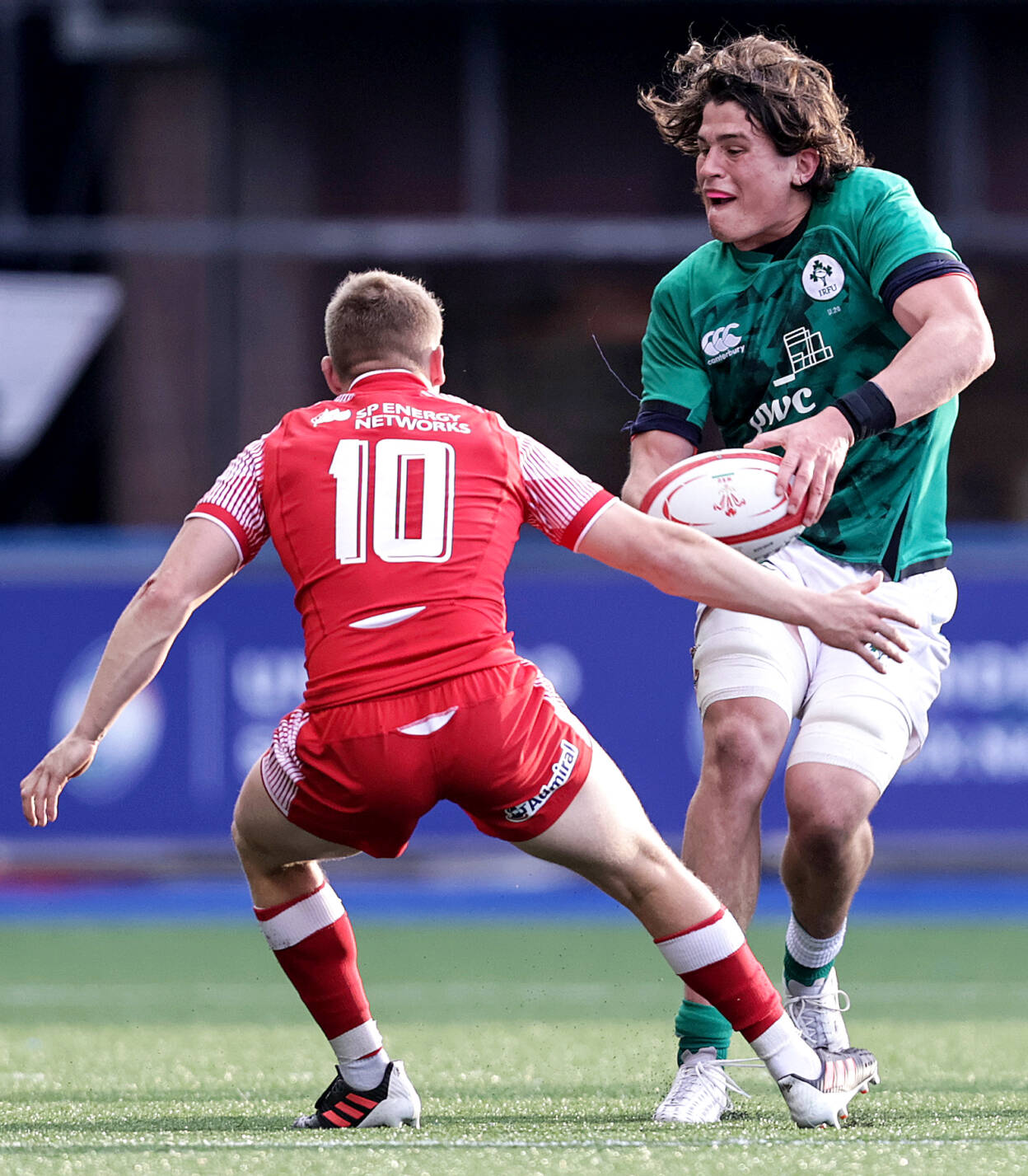 Corkery’s flat running and distribution sparked the best out of the Irish attack again, allowing Doak to fire over his second penalty goal of the game and make it 25-5.

Wales then profited from Shane Jennings’ sin-binning – the centre was guilty of not rolling away near his own try-line – as good hands put winger Carrick McDonough over in the left corner. Following up, Costelow swept over a terrific conversion.

The home side handed back three points straight from the restart, as a Cosgrave charge-down preceded a Mann infringement. Doak mopped up with a well-struck penalty for 28-12.

Ireland’s bench players ensured the visitors wrestled back control, beginning with a bustling carry by Sam Illo. McDonough saw yellow for playing the ball from an offside position.

The bonus point was duly pocketed in the 69th minute, a strong lineout drive ending with Shannon clubman Okeke crashing over near the right corner flag. 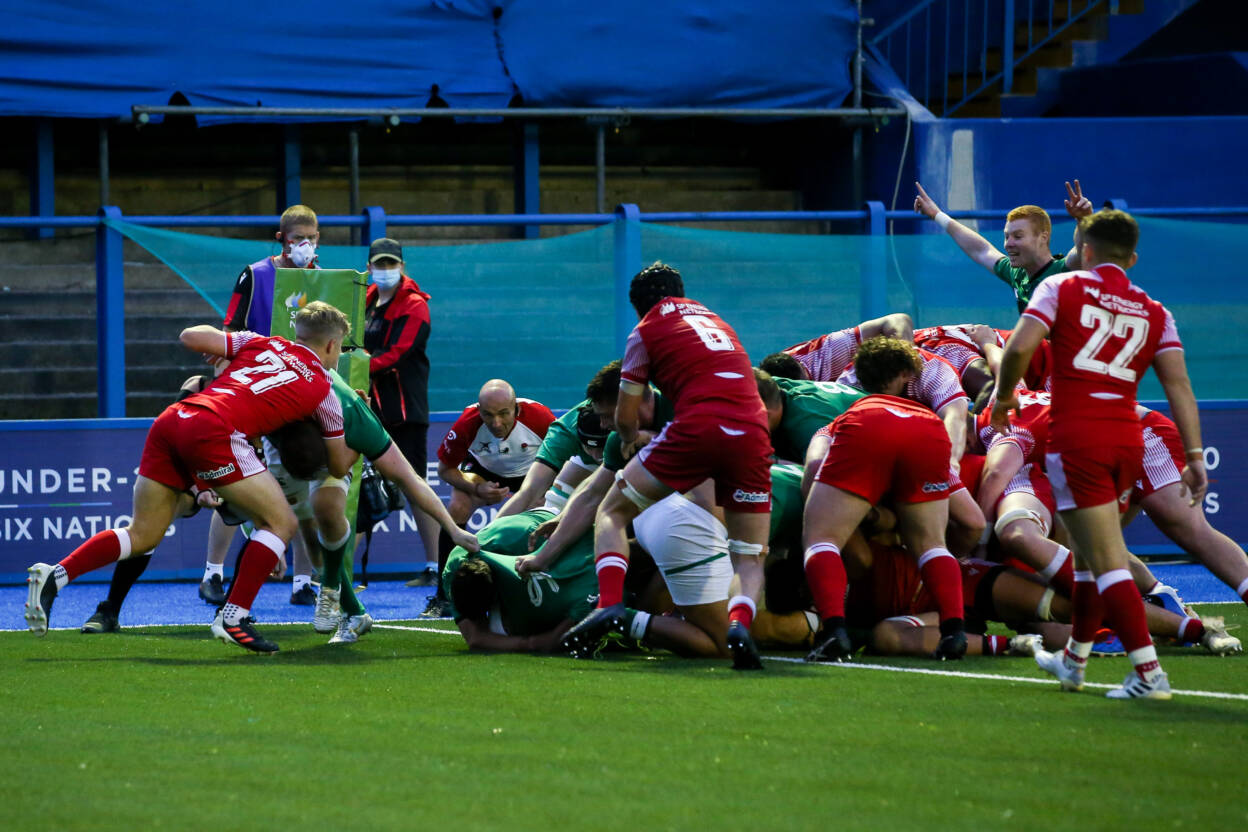 Improved maul defence saw Ireland prevent Wales from answering back, and after further Welsh indiscipline, Kendellen burrowed over for try number five. Doak fittingly signed off with his sixth successful kick of the night. 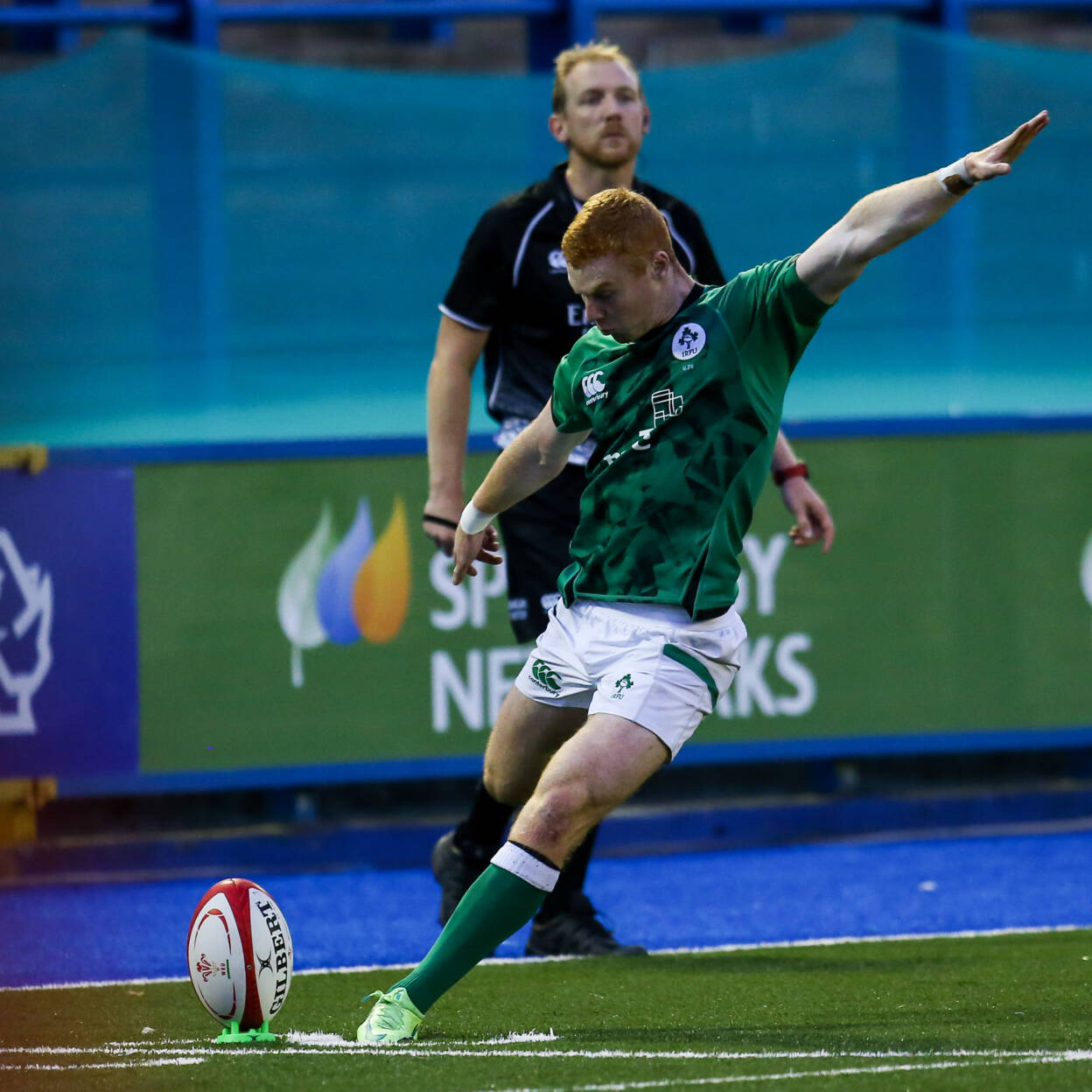