Man-of-the-match Rob Jermyn had a day to remember, scoring a superb solo try, saving one at the other end and supplying the assist for replacement Duncan Williams’ crucial 58th-minute score. Out-half Aidan Moynihan tagged on three closing penalties to steer Cork Con to their sixth league crown, making up for last year’s defeat to Lansdowne.

Clontarf were only 14-13 behind approaching the hour mark, Matt D’Arcy’s 36th-minute try from a quick tap – in response to converted efforts from Shane Daly and Jermyn – and eight points from the boot of David Joyce making it a one-point game. However, half-backs Williams and Moynihan combined to steer the table toppers home. 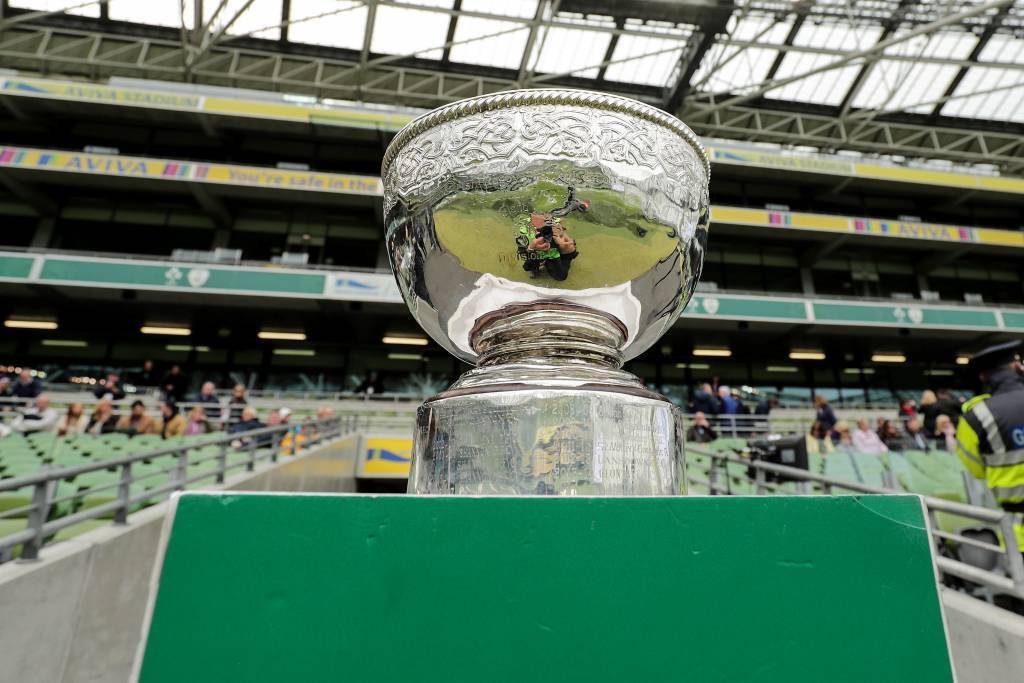 Cork Con coaches Brian Hickey and Paul Barr were forced into a significant late switch as captain Niall Kenneally’s injury-enforced withdrawal brought Alex McHenry into midfield, while Clontarf fielded the same team from their semi-final apart from the absence of injured winger Mick McGrath. It was one win apiece from the clubs’ 2016 and 2017 final meetings.

Despite dominating the early possession, Clontarf fell behind to centre Daly’s 12th-minute try. Scrum possession near halfway was moved wide to Sean French who shrugged off Jack Power and held off Cian O’Donoghue’s challenge, linking with Liam O’Connell whose instinctive one-handed flick sent the onrushing Daly darting over beside the posts. 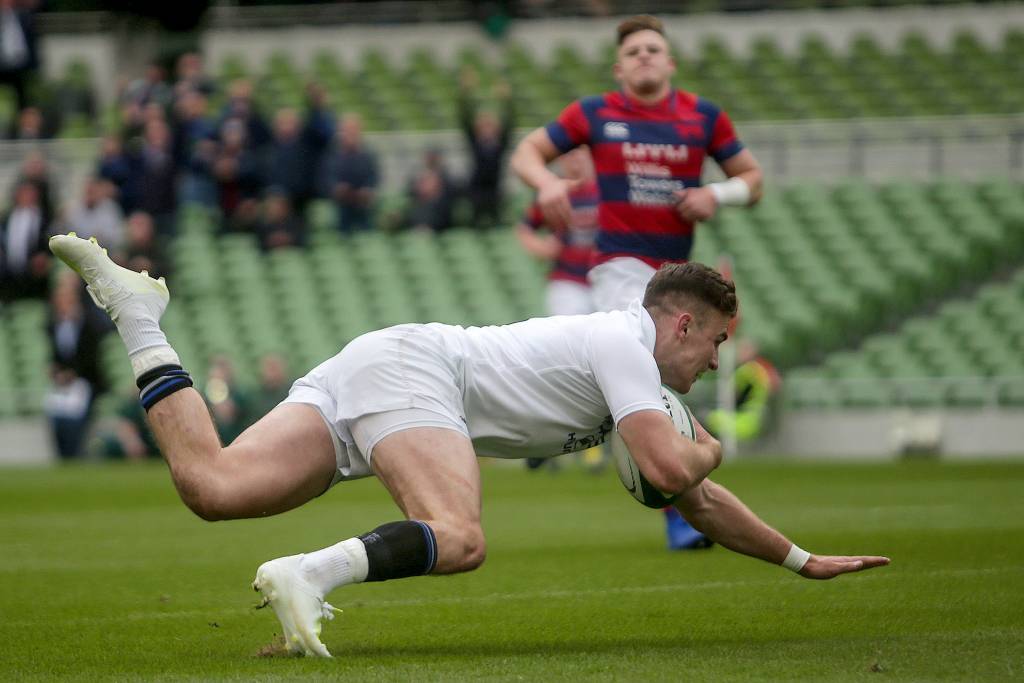 Ever-accurate out-half Moynihan converted for a 7-0 lead, ‘Tarf hammering back with a snappy break from Connacht signing Angus Lloyd and McHenry was promptly sin-binned for slowing up the ball close to his own try-line. Joyce fired over the penalty kick to get his side on the board, but Con swiftly showed their clinical edge again with Jermyn’s brilliantly-taken try.

Number 8 Luke Cahill’s inviting inside pass saw Jermyn expose Clontarf’s defence at the side of a ruck, the wily winger hurtling through and sidestepping around full-back Power to go over to the right of the posts. Moynihan’s conversion made it 14-3 midway through a fast-paced first half and Con’s noted defence kept ‘Tarf try-less during McHenry’s time off the field. 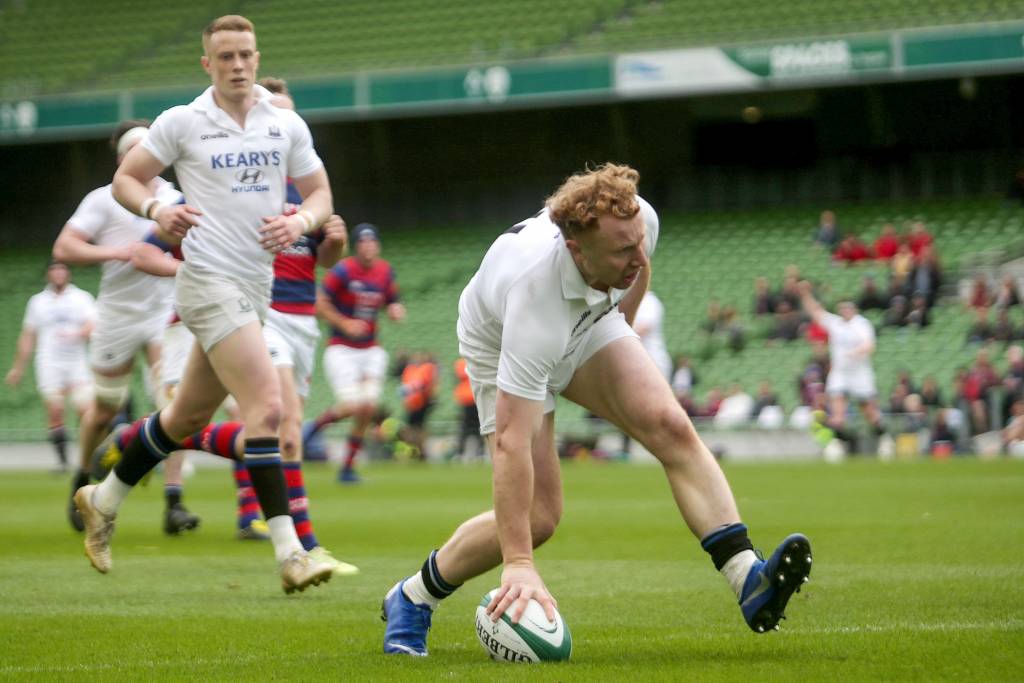 French and Cahill put in two crucial tackles, the Ireland Under-20 starlet foiling an excellent break involving Power, Michael Courtney and Lloyd, and Cahill thwarted his opposite number, Clontarf skipper Michael Noone, near the right corner. It looked like Con would survive some Vakh Abdaladze-inspired scrum pressure, especially when Jermyn got his hand under the ball to prevent Power from scoring off a five-metre scrum.

Power really should have passed to the waiting Courtney on his outside, but his blushes were eventually spared by talismanic centre D’Arcy. After Lloyd had knocked on at the base of a scrum, Clontarf bounced back with a strong bout of carrying, winning a close-in penalty from which D’Arcy stretched over past Cahill and Moynihan for a timely seven-pointer. 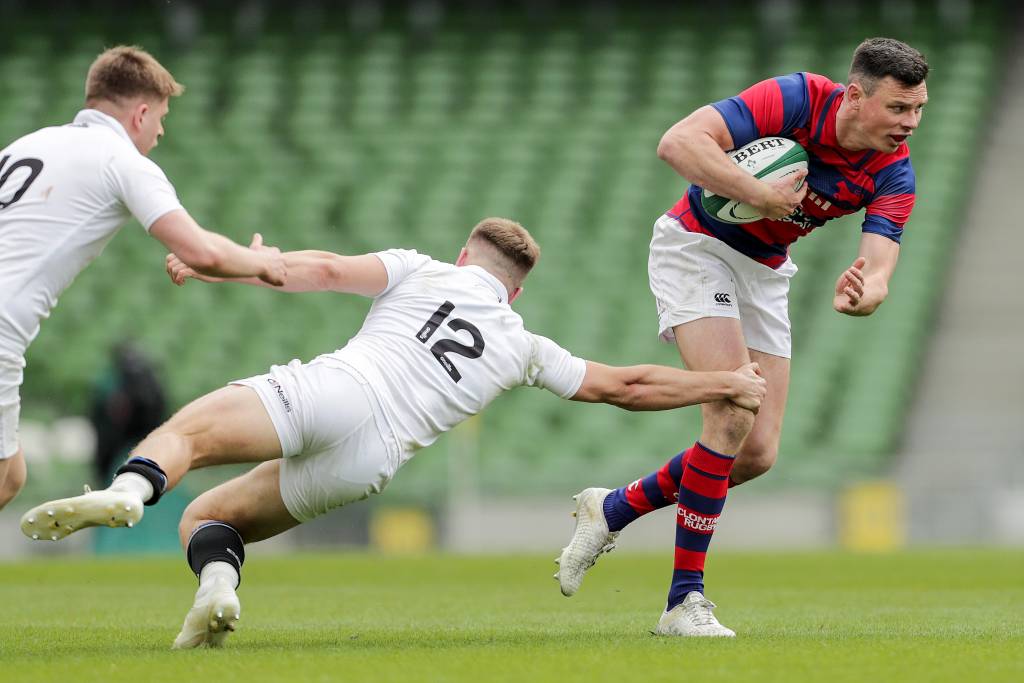 D’Arcy was becoming increasing influential, holding up Joe McSwiney for a turnover and then breaking downfield off the resulting late scrum. That gave Andy Wood’s men some momentum at only 14-10 down, but Constitution exploded out of the blocks on the resumption with Daly, McHenry and Moynihan all finding gaps. ‘Tarf scrum half Lloyd was caught offside twice and yellow-carded by referee Jonny Erskine.

Con turned down a kickable penalty and 14-man ‘Tarf displayed their own survival skills, Joyce tackling Jason Higgins short of the line before stand-in Con skipper Brian Hayes’ low-slung pass was knocked on by McSwiney. Lock Cormac Daly’s important tackle on French prevented a potentially dangerous break back on halfway, and Joyce was able punish an offside call against Vincent O’Brien with a 54th-minute penalty goal.

With Leinster’s Conor O’Brien on at centre, Clontarf remained on the front foot as Power and Lloyd spearheaded a break through midfield. However, on the day, Con only needed a sniff of a chance to score, and just a couple of days on from confirmation of his departure from Munster after 11 years, experienced scrum half Williams started and finished a classy breakaway try. 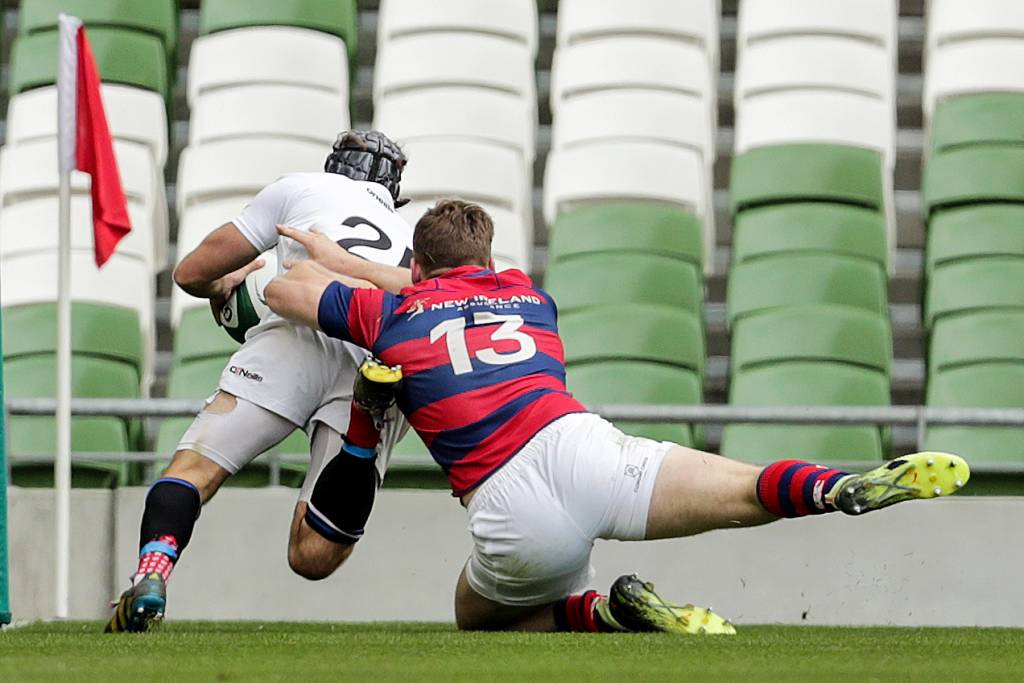 The freshly-introduced 33-year-old, who said afterwards that this was probably his last game of rugby, used a sudden turnover to kick downfield, Jermyn was first to it and passed out of a tackle for Williams to dash towards the left corner and squeeze over past Sean O’Brien’s last-ditch challenge.

Moynihan landed the 62nd-minute place-kick to extend the lead to 22-13, and he added another with 11 minutes remaining after replacements Conor O’Brien and Brian Deeny had leaked successive penalties. Con were then down to 14 men as French saw yellow for a deliberate knock-on, albeit that there would have been enough Con cover to keep Power from scoring from Adamson’s attempted pass. 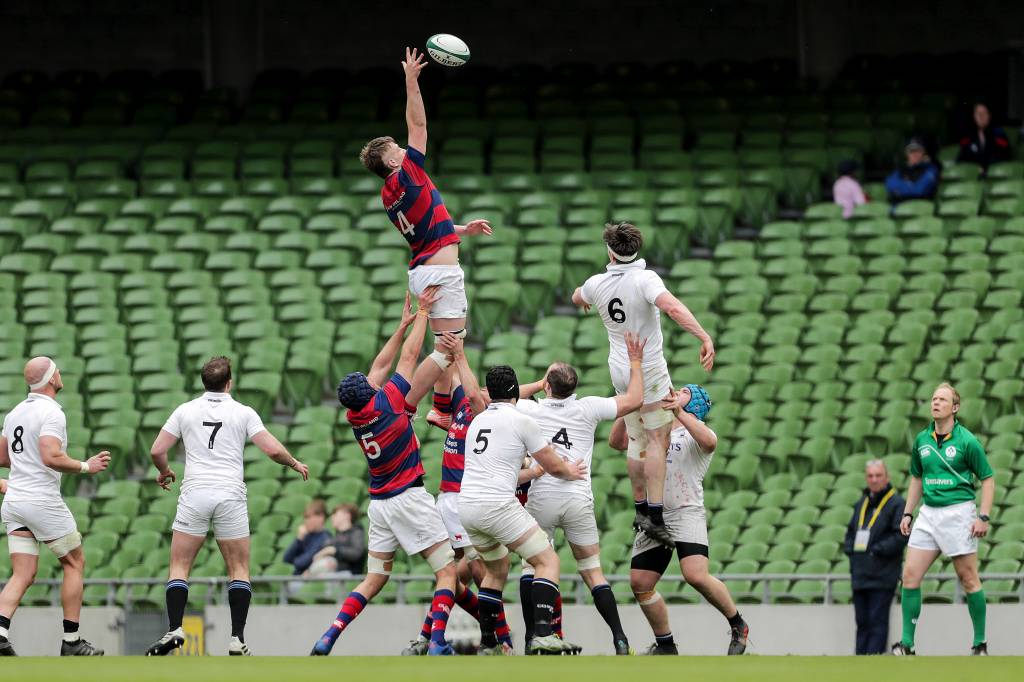 ‘Tarf then lost hard-won territory, busy Munster Academy back McHenry showing his power and pace to surge back into the opposition 22. Replacement Max Abbott followed up with a penalty at the breakdown, ensuring that Moynihan claimed the final three points of a very entertaining league decider.

Hickey, Cork Con’s director of coaching, gave special mention to injured captain Niall Kenneally who received the trophy alongside Hayes. “It’s fantastic (to be champions again). When Niall got injured in the warm-up, it would be very easy to leave the heads drop. But we said we wanted to win it for Niall and do it the way he’s led the team with huge integrity and honesty,” explained Hickey.

“I think the players went to deeper levels, particularly when defending our line in the first half. Niall has been been a fantastic captain for the four years and I think today’s performance shows how much respect he’s held in at the club.

“I think we got out of jail a couple of times. Clontarf are a very tough team to beat as was shown during the regular season. We attacked more and held the ball more in the second half, and I think it was positive rugby which won it for us in the end.” 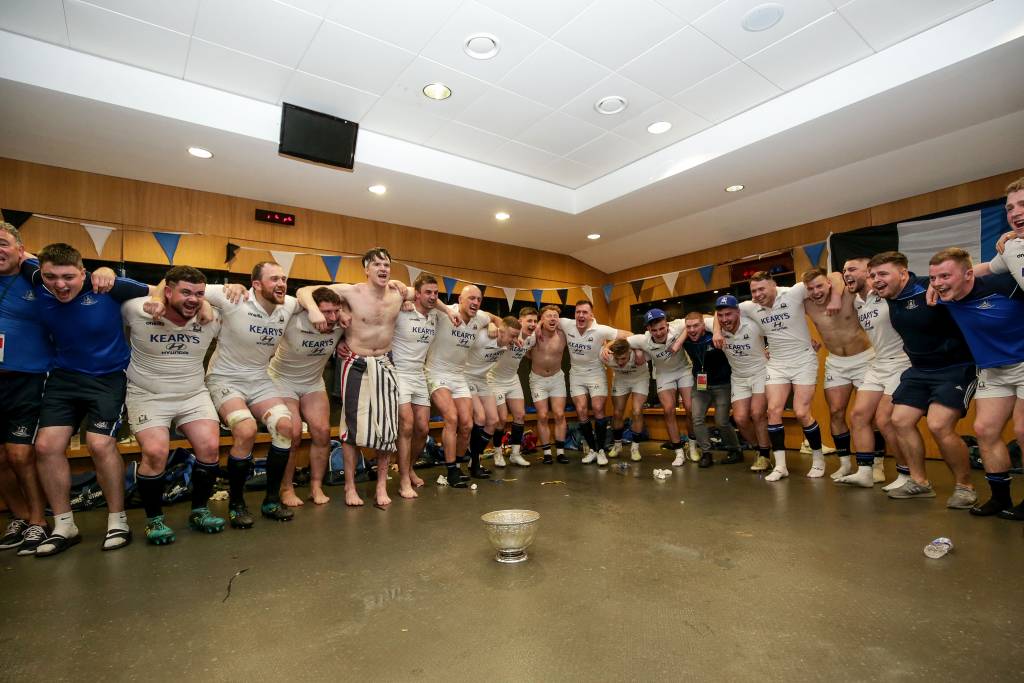