Dublin University took their time to get going but when they did, there was no stopping Tony Smeeth’s side from running out 35-16 bonus point winners over Ballynahinch.

‘Hinch quietened the College Park bearpit by taking a 13-point lead, number 8 Jamie Macartney barging over from a lineout maul with Greg Hutley kicking the rest of the points.

A late Trinity rally closed the gap to 16-15 by half-time, with rangy lock Max Dunne crossing for his third try in two games.

However, with their scrum getting on top, the students surged clear thanks to a fine breakaway effort finished by Ronan Quinn, James Dillon’s second try of the afternoon, and a 15-point kicking contribution from Aran Egan.

It was a Saturday to remember for Dublin University as their Under-20 team won the Conroy Cup in Cork, overcoming arch rivals UCD 21-14 in the final at the Farm Sports Grounds in Curraheen. 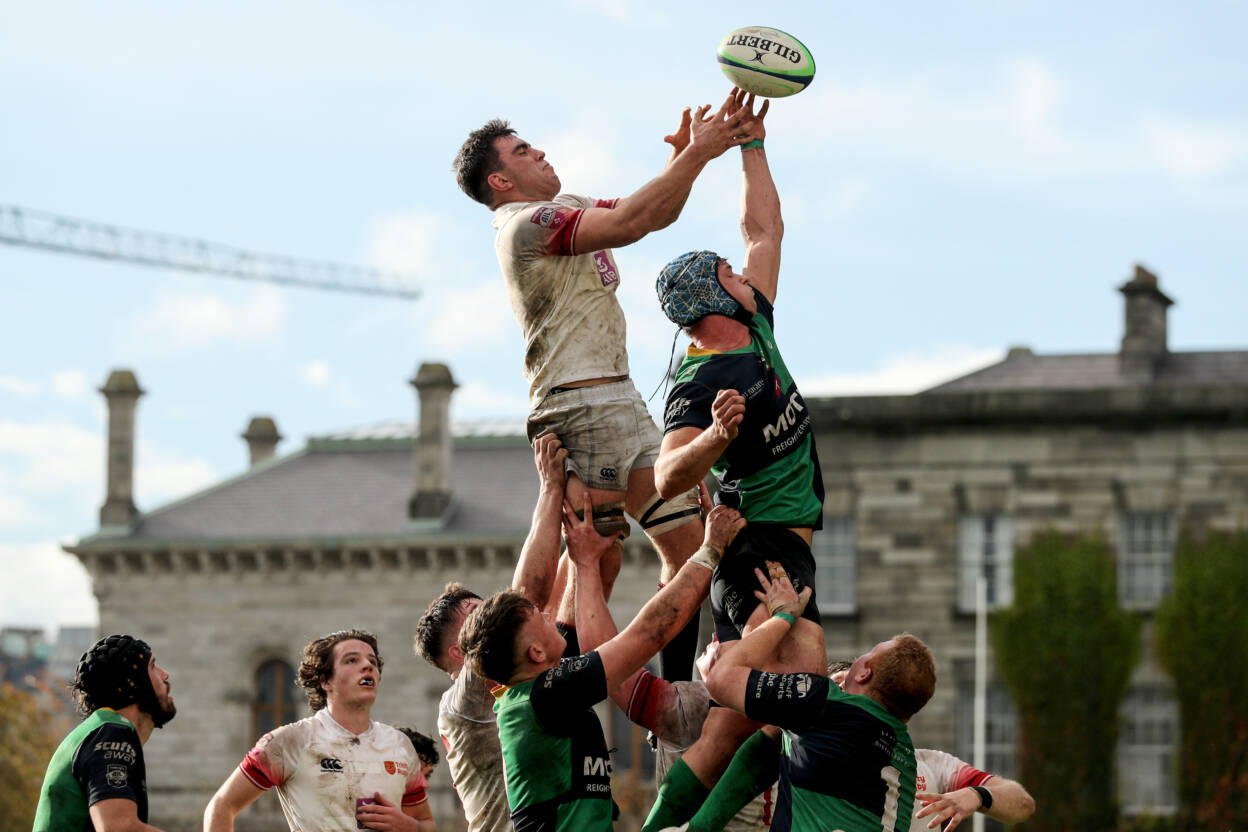 Ballynahinch were the more accurate team during the early stages at College Park, out-half Hutley launching over a long-range penalty. His half-back partner Conor McKee was then wide with an effort from just inside his own half.

Their aggressive, smothering defence, coupled with a subsequent poach by prop John Dickson, saw ‘Hinch keep Trinity at arm’s length while Egan overcooked a touchfinder and the hosts’ lineout was also coming under pressure.

A thumping man-and-ball tackle by Trinity’s teenage prop Paddy McCarthy deserved a turnover, but instead he was penalised and Hutley mopped up with the three points for a 6-0 lead.

Ethan Graham then pinned the students back with a cracking 50:22 kick in the 25th minute. The resulting maul was driven over in the right corner with Macartney the scorer.

Although Hutley converted with aplomb from out wide, Trinity lifted their game approaching the break. McCarthy made the initial incision with a rousing run through the middle.

Tom Martin appeared to ruin the hosts’ next lineout opportunity, but the Ulster Academy’s Harry Sheridan stole possession back and his lock partner Dunne burrowed over with timely support from Mark Nicholson.

Hutley cancelled out Egan’s conversion, rewarding Kyle McCall’s work at the breakdown, only for Trinity to squeeze in a late eight-point spurt to suddenly trail by the minimum. 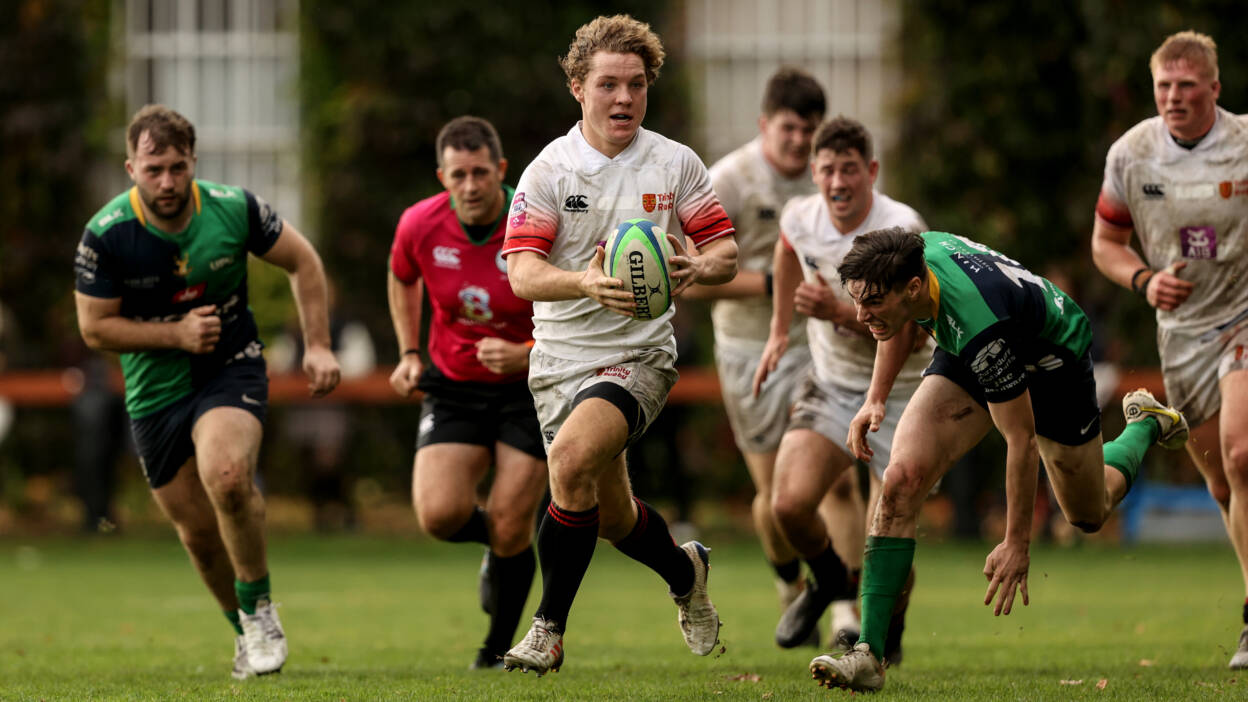 Louis McDonough did really well to wriggle through heavy traffic and release winger Dillon for a 30-metre run-in to the corner. Egan missed the conversion before splitting the posts following a Thomas Connolly-led scrum penalty.

Smeeth’s youngsters held onto the momentum for the start of the second half, another scrum penalty seeing Egan kick them in front at 18-16. A McDonough interception then saw the white shirts flood forward in spectacular fashion.

Egan and Colm Hogan released Gavin Jones into space down the left and he fed speed merchant Quinn to scamper over out wide. Egan clipped over a neat conversion for a nine-point lead.

‘Hinch laid siege to the Trinity line in response, with replacements Nacho Cladera Crespo and Ben McMullan both carrying well. However, an unfortunate scrum penalty cost them just a few metres out.

In a further setback, ‘Hinch lost industrious flanker Bradley Luney to the sin bin for a cynical offside past the hour mark. Sheridan made them pay, cutting back to the short side to loft a pinpoint pass out for Dillon to bag the bonus point.

Trinity continued to have a stranglehold on the scrums, forcing two penalties and giving Egan the chance to finish off his own tally for the day.

‘Hinch did well to keep the deficit at 19 points, having lost Mark Best to a yellow card and been taken through some long defensive sets. A final lineout steal from Diarmuid McCormack ruined their hopes of a late consolation try. 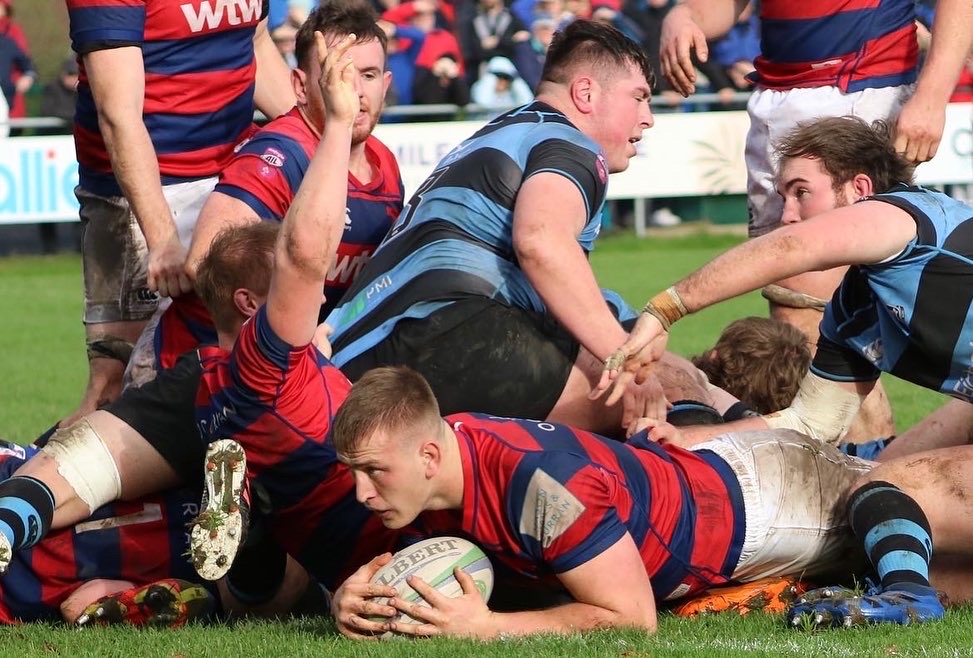 Clontarf are making a habit of this, running in four second half tries to hand Shannon a 27-9 beating at Castle Avenue.

It is the second round running that they have put on a bonus point blitz after the break, today’s final try coming from Cormac Daly at the end of some brilliant interplay between backs and forwards.

With four wins from four, third-placed ‘Tarf just have that knack of opening up defences and converting their chances, whereas bottom side Shannon are struggling to put points on the board.

It was a positive opening half for Pat O’Connor’s young side, as a trio of penalties from Mike Cooke gave them a 9-3 interval lead.

The hard-carrying pair both proved unstoppable from close range, their tries converted by Conor Kelly to give the defending champions a 17-9 advantage.

Leinster Academy scrum half Ben Murphy was sprung from the ‘Tarf bench and capitalised on a narrow gap around the fringes to add try number three.

Shannon battled on, captain Ronan Coffey and John Hurley their best in a valiant effort, but ‘Tarf sealed the deal when Daly broke from his own 22 and then popped up at the end of a free-flowing attack to complete his brace. 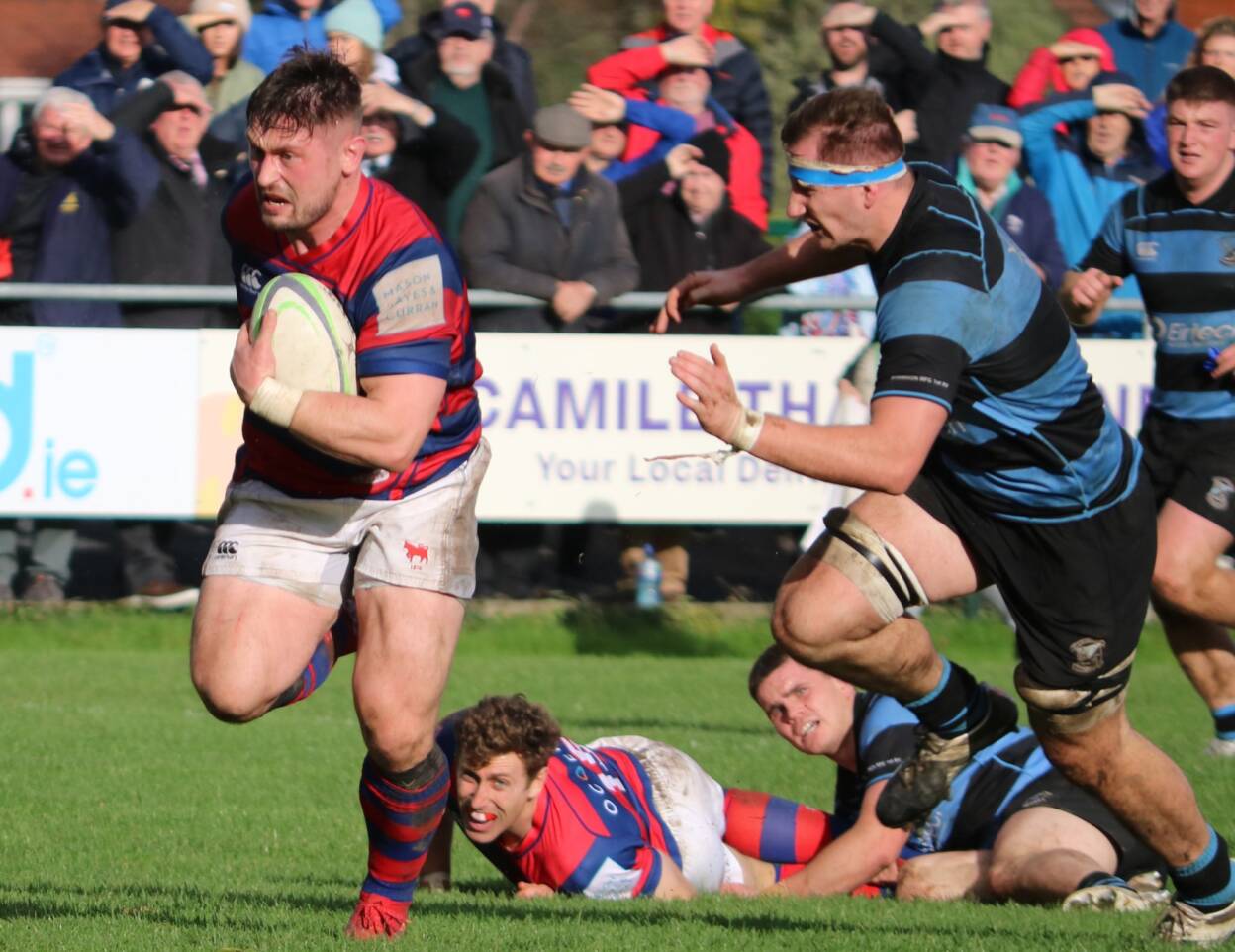 Another second half surge did the trick for Cork Constitution as they saw off Garryowen on a 33-16 scoreline at Temple Hill.

Resuming their Energia All-Ireland League campaign at home, Jonny Holland’s charges tallied up five tries to move up to fourth in the table.

Garryowen tried manfully to cope with their scrum problems, but they gave way after the break and could not contain Cork Con’s powerful pack.

Two penalties from Munster Academy scrum half Jack Oliver had the visitors leading 6-3 towards the end of the opening quarter. Captain Aidan Moynihan responded for Con.

However, Garryowen’s indiscipline allowed the home side to move ahead. Hooker Max Abbott crossed from a 23rd-minute lineout maul and Moynihan knocked over another penalty, punishing sin-binned prop Darragh McCarthy for an off-the-ball offence.

The swirling wind made kicking particularly difficult, and Con’s own whirlwind start to the second half saw them kick on. Eoin Quilter carried on Greg Higgins’ initial break and the momentum built for prop Alessandro Heaney to score.

Nine minutes in, Con’s lead had increased to 21-6 when going from wing to wing and Daniel Hurley profited from quick ball to make it over in the corner.

Garryowen coughed up the bonus point soon after, Con going for the jugular at a five-metre scrum and referee Peter Martin went in behind the posts to award the penalty try.

More space began to open up during Con replacement Matisse Lamarque d’Arrouzat’s sin-binning for a late tackle. Garryowen managed to rally with a try each from former Con winger JJ O’Neill and Tommy O’Hora.

The home supporters were treated to a fifth and final score from replacement Billy Scannell, who was played in by a well-placed pass from impressive flanker Jack Kelleher.

Elsewhere, Division 1A leaders Terenure College made it four bonus point victories on the trot by hammering UCD 58-5 at Lakelands Park.

Flanker Gerry Hill scored the students’ only try during the second half, at which stage Terenure were already 44-0 to the good.

Number 8 Coghlan charged over from an Alan Bennie pass, Callum Smith converting and adding a penalty before slick hands from Brewer, who took out two defenders with an overhead pass, played in McNulty for a 33rd-minute try.

Two more ‘Nure tries took care of the bonus point before the break, leaving UCD trailing by 29 points, and a maul effort from McNulty early on the resumption putting them further behind.

La Grue and replacement Adams, who displayed his pace to score an excellent try from deep, added their names to the list of try scorers, before Dooley and Clohessy, who was released by a terrific offload from Adams, cancelled out Hill’s score. 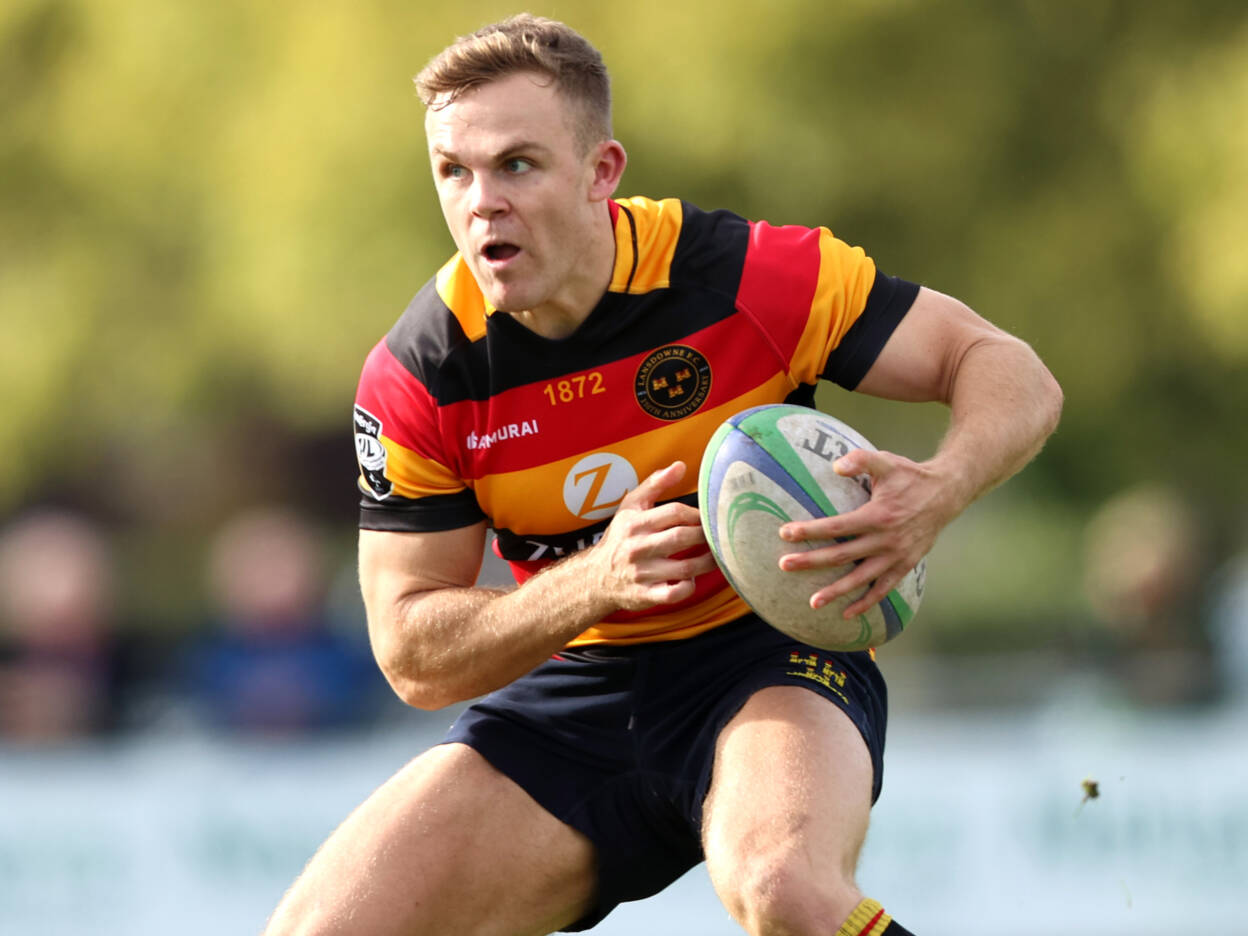 Lansdowne opened their win account at the fourth attempt, overcoming Young Munster 20-13 in Greenfields thanks to tries from Michael Silvester and Leinster Academy prop Temi Lasisi.

Full-back Silvester cut through to score during a prolonged rain shower, adding to an earlier Peter Hastie penalty as Lansdowne turned around with a 10-0 advantage.

Munsters fought back to draw level by the 60-minute mark, a strong five-metre scrum paving the way for Dan Walsh to touch down. Conor Hayes converted and then supplied the levelling penalty.

Crucially though, Lansdowne hit back with a purple patch of their own. Their forwards, led by Clive Ross, made inroads again and Lasisi muscled his way over for Hastie to convert.

The Wicklow man finished with an important 10-point haul, his last penalty putting Lansdowne out of reach. Hayes made sure the Cookies claimed a last-minute bonus point, splitting the posts with a well-struck 40-metre penalty.